The 2021 Ram 1500 comes standard with a simple 5-inch touchscreen, while the 8.4-inch version found on most versions as standard equipment is the same user-friendly unit found elsewhere in the Chrysler/Dodge/Jeep/Ram line up. Unlike all those other brands in the North American Stellantis empire (ugh), however, the Ram offers a unique take on the Uconnect: a 12-inch vertically oriented touchscreen. While other cars offer similarly tall screens, such as the Subaru Outback, Ford Explorer and every Volvo, none do such an exceptional job of taking advantage of the orientation and size. The same can be said in comparison to the Ford F-150’s new jumbo touchscreen.

My full review of the system is in video form and can be watched above. I’ve also included a few pictures below to dig deeper and touch on some areas I missed in the video. 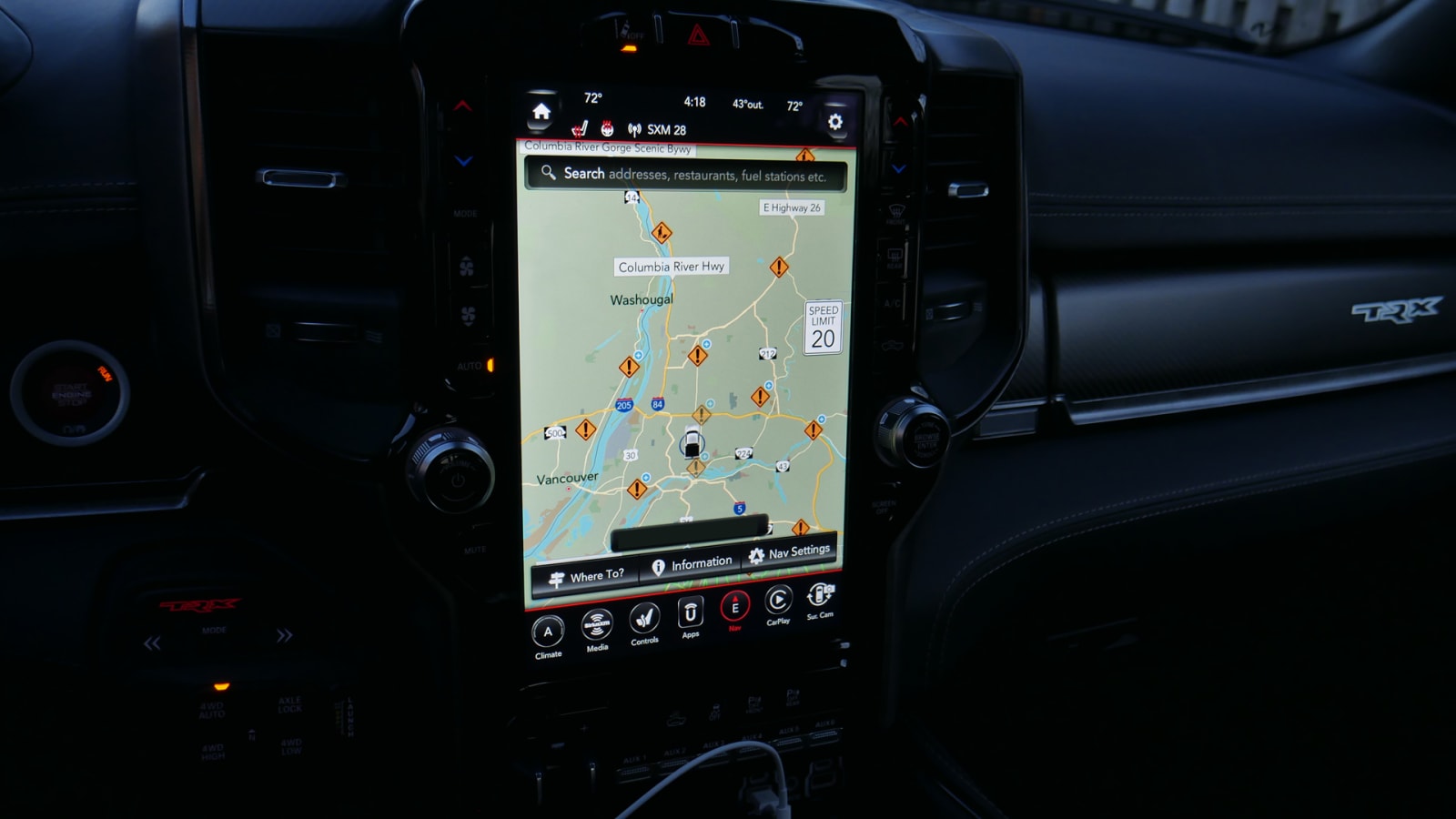 Here’s what the screen looks like when you just want a colossal map. Sadly, the map graphics are pretty low-fi and Garminy. 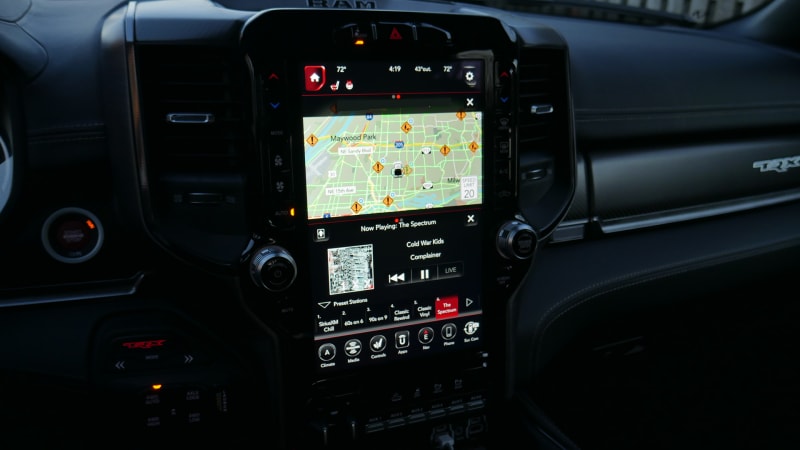 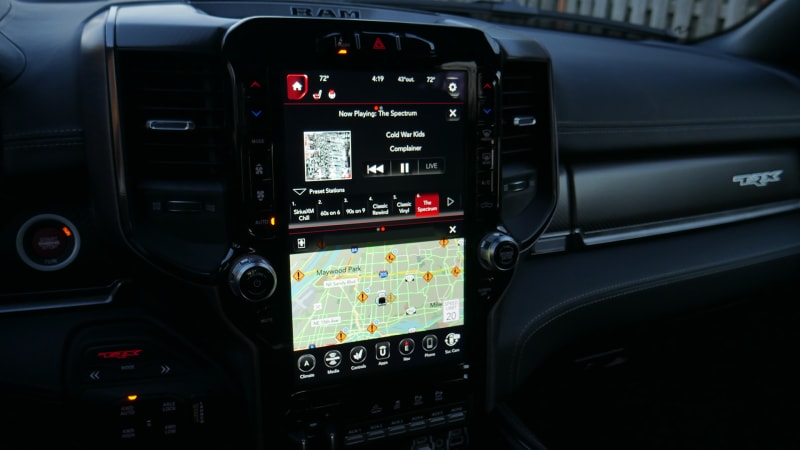 As I mention in the video, one of my favorite things about this system is the ability to choose what is displayed on top and what’s displayed on the bottom. That the Ram’s screen is basically the size of two normal screen definitely helps in this regard. 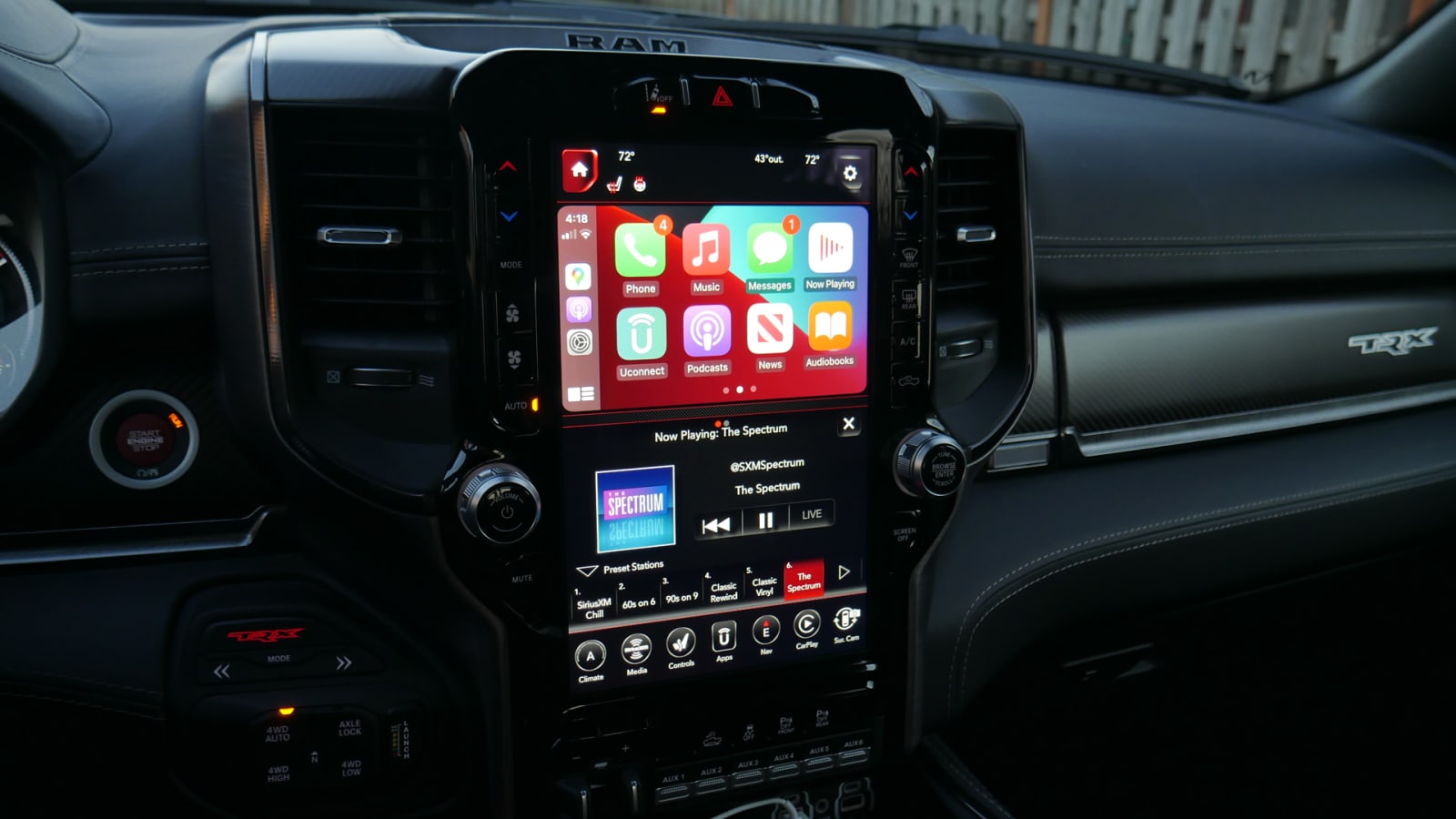 I especially like that you can see Apple CarPlay at the same time as radio controls. 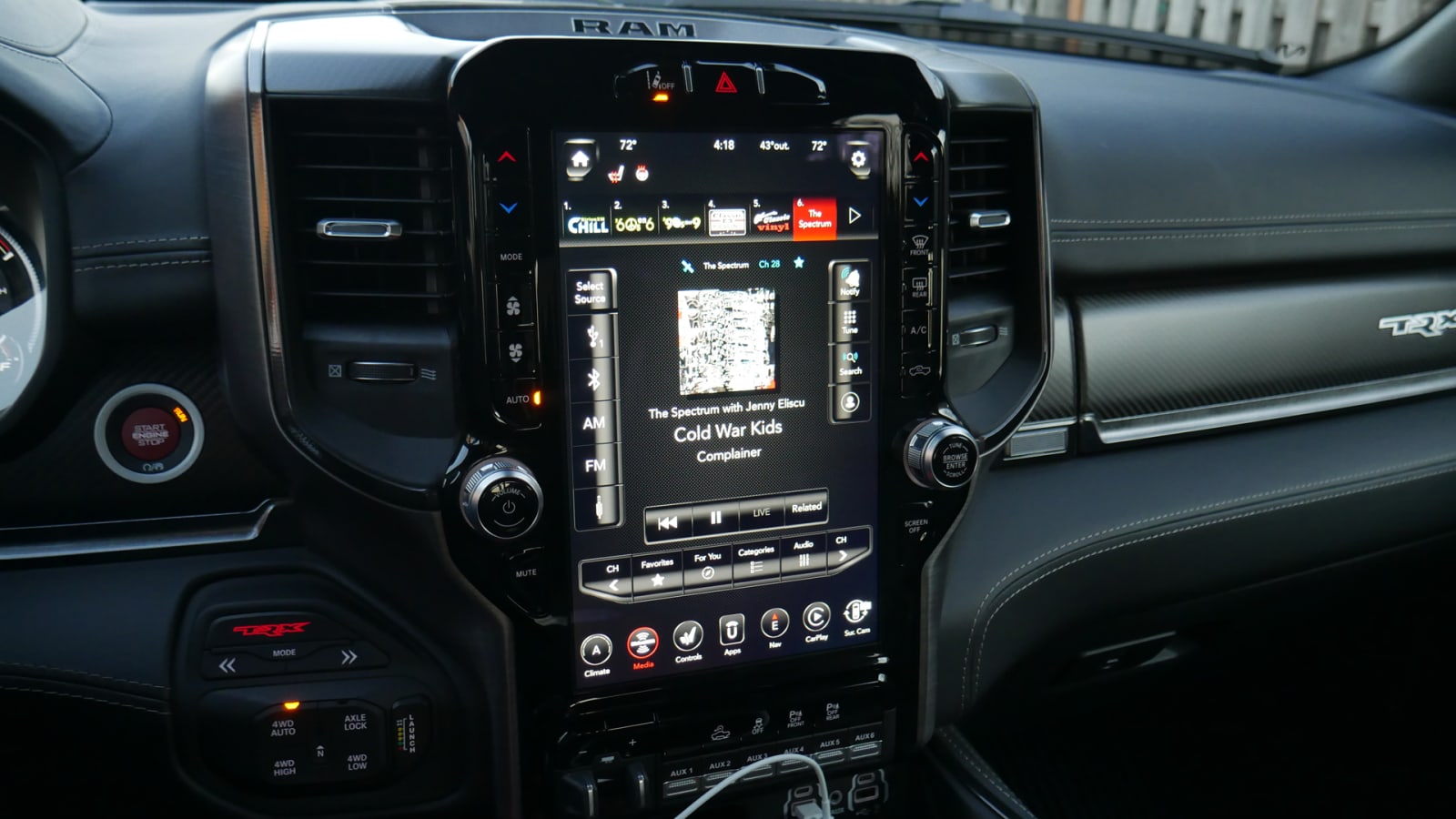 I also like how prominently placed and easily reached the radio preset buttons are in this full-screen media layout (utilizing the full-color logos of satellite radio stations is a nice touch, too). 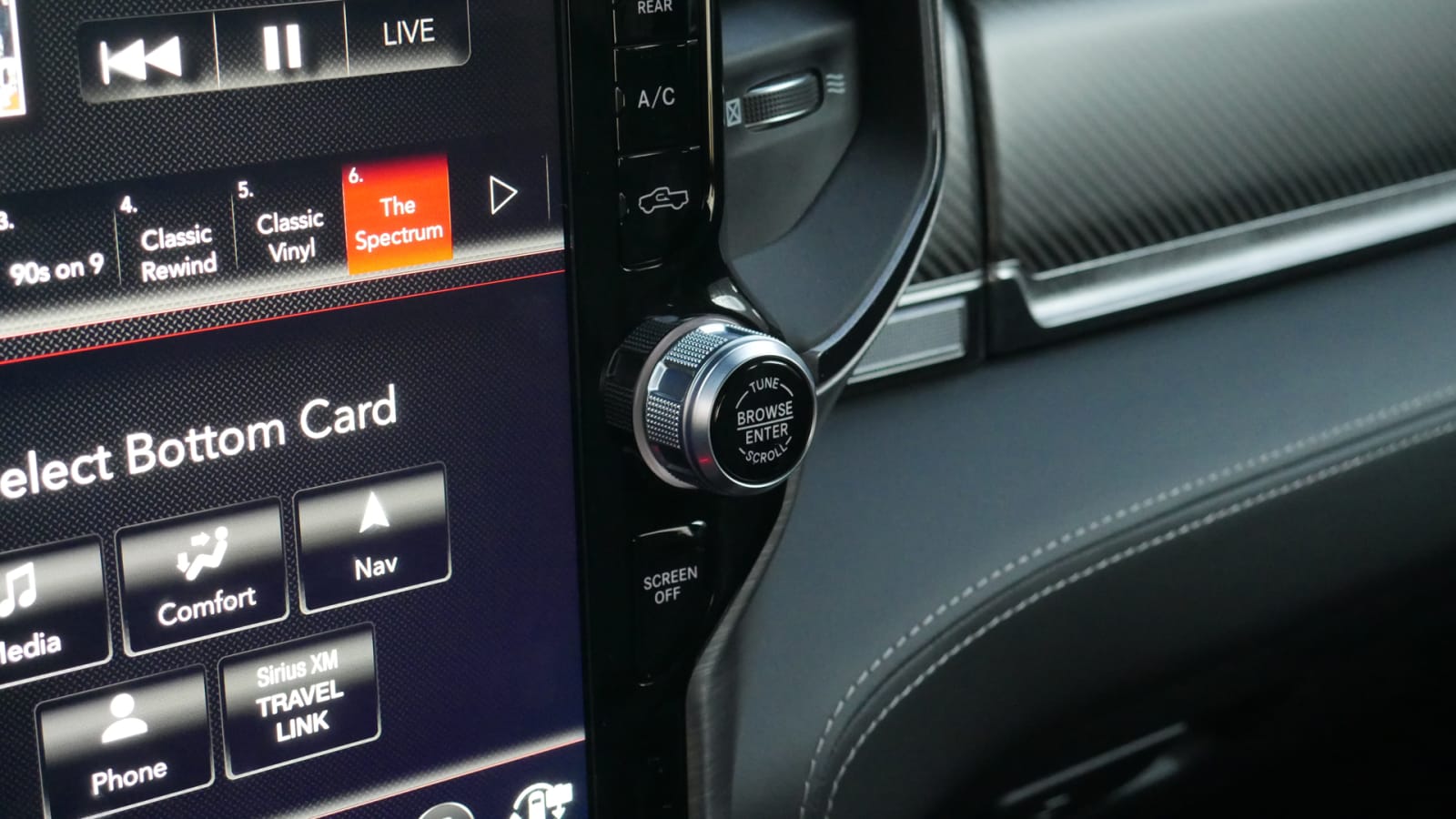 One thing I didn’t touch on in the video is the redundant control knob that’s appreciated for scanning playlists or contacts. 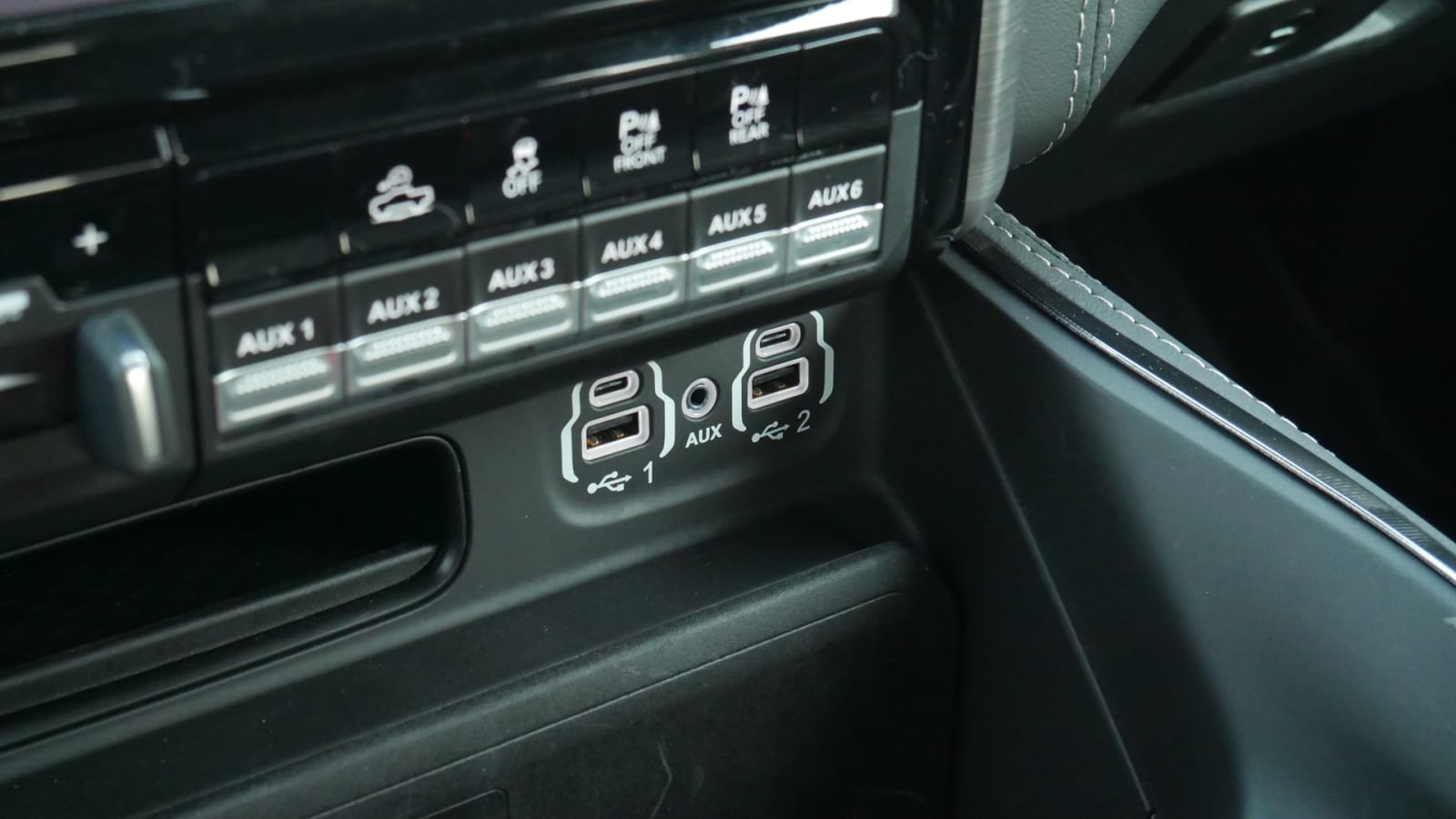 There are USB-A and USB-C ports up front. Note, however, that there are really only two outlets — each is just split between the different formats and you can only use one at a time. There’s another unit like this in the back seat, as well as another USB-A port under the center armrest. 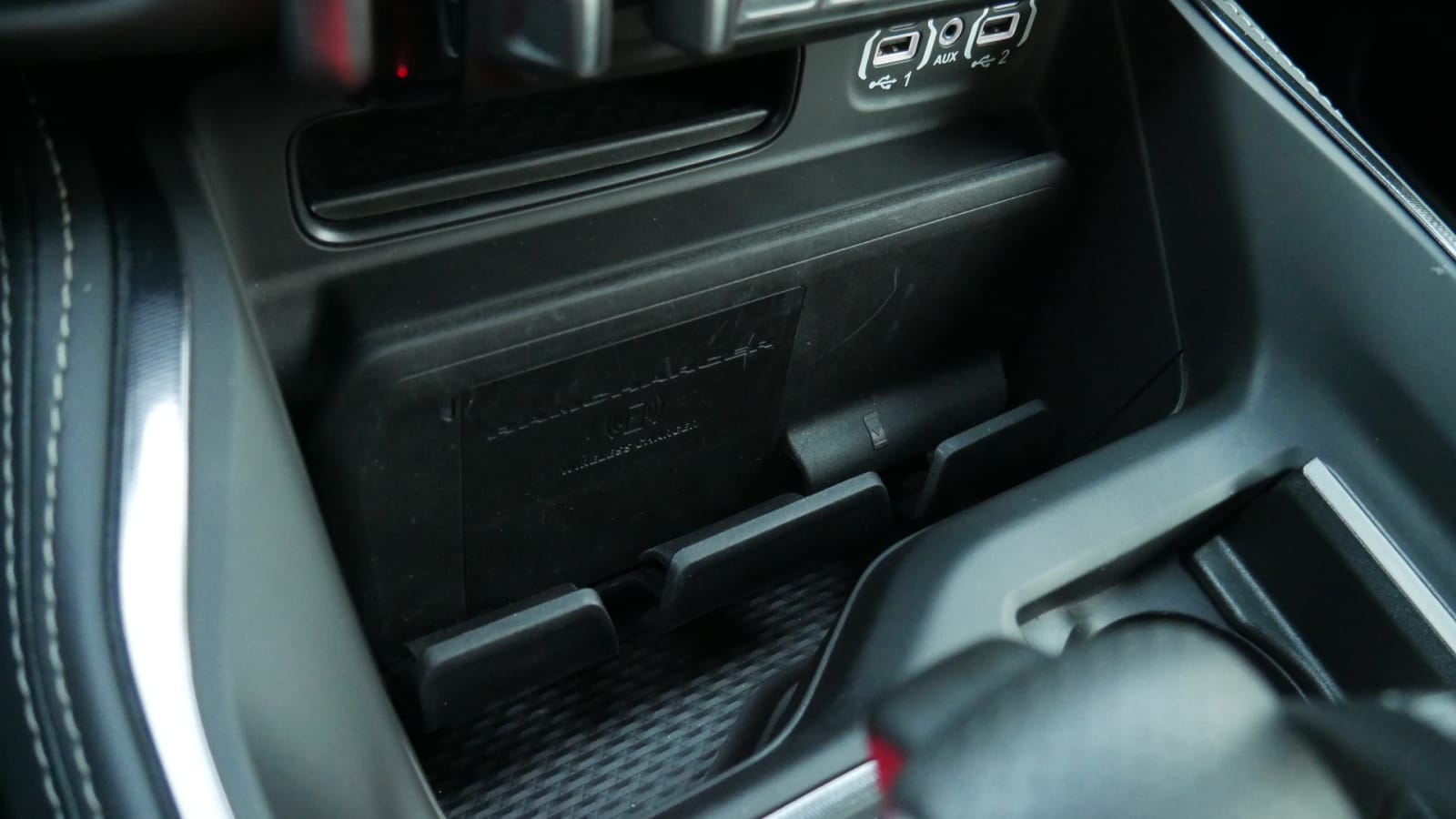 This is a clever bit of design. The wireless charger is on the left and utilizes a holster-like element to press your phone against it, thus saving space versus the usual flat pad. That holster then extends to the right to hold in place phones without wirelessly charging them.

This and so many other thoughtful details are big reasons why the Ram 1500 interior has been so universally lauded. It’s not just fancy leather, better-than-average plastics or even that gigantic “hey look at me!” screen. There’s also tons of substance.