Call it a dinosaur. Mock the Nissan parts bin interior. Declare it overpriced versus newer sports cars. The 2021 Nissan GT-R doesn’t mind. It’s still Godzilla, and it will still rip your head off with pleasure.

Flashback to a few years ago: I was chatting with Alfonso Albaisa, Nissan’s design boss, about the GT-R. He divulged some information about Nissan’s two-door super-sports coupe that’s stuck with me ever since: Nissan never stops tweaking the performance. Each successive model year is different and better in small ways (suspension tweaks, minor powertrain updates, etc.), even if there is no major press release or announcement made. There’s a dedicated team of engineers that is constantly fiddling and toying with the car. Vehicle development programs come and go, but Albaisa says the GT-R’s is different than any other Nissan product, in that the team treats development like a light switch that never goes off.

That said, it may look like Nissan is ignoring the GT-R when you take a step back. The old, chunky aesthetics don’t look much different than they did a decade ago, but that close-up view gives me heart. Heart enough that even years after its major refresh for 2017, it’s time to see how Nissan’s best stands on its own, and versus the platter of sports cars that have come out in recent years — namely, the latest Porsche 911 and C8 Corvette.

Nissan provided a Bayside Blue GT-R Premium on Bridgestone Blizzak winter rubber, the perfect setup for a snowy winter week. Being able to option the iconic Bayside Blue paint outside of the 50th Anniversary Edition is the new, big ticket item for the 2021 model year. Frankly, it looks better without the cheap sticker package Nissan plastered onto the anniversary car.

Upon slipping into the thickly-padded and big-bolstered driver’s seat, it immediately feels … well, normal. The gear lever is a little funky, the door release handle has a strange pull up release action, and there’s a trio of custom mode buttons and GT-R logos, but beyond that, it’s just a Nissan. And an old one at that. Nothing here matches the $115,335 asking price. This stands in sharp contrast to something like the Corvette and its exotic, jet-inspired interior. It’s not comparable to Porsche’s classic elegance either. The word cheap crossed my mind more than a few times throughout the week.

All the fundamentals are done to perfection, though. The view out over the front hood is superb. You can see out the back with ease, and checking blind spots isn’t a problem either even though Nissan don’t include a blind-spot warning system. Two separate pull-down paddles allow for tilt and telescoping of the wheel into perfect position. Smartly, the whole instrument cluster and hood apparatus moves with the wheel, so you never lose perfect sight of the gauges. The only change that could make this seating position any better is to mount the seat closer to the floor.

That shroud of normality is dashed away when the start button is pushed. The GT-R’s highly wound 3.8-liter twin-turbo V6 barks and whooshes to life through a titanium exhaust. It’s distinctive, but not obnoxious or overly loud at rest. Despite the GT-R supposedly having matured a few years ago through massive refinement efforts, the solid clunk on the shift from Park to Reverse makes it immediately known how raw of an experience this is about to be. Occasionally, the dual-clutch six-speed automatic was able to facilitate smooth takeoffs from zero. Other times, the GT-R would buck in protest of being driven like a normal car. Fine. Putting my foot through the firewall from a stop ended up being more fun anyway.

Calling all 565 horsepower and 467 pound-feet of torque to the party at once is what the GT-R has always been about. This car will hit 60 mph in just 2.9 seconds when you use its brutal (and historically controversial) launch control system. That was seriously hot stuff not too long ago. Now the Corvette will do the same, and a 911 Carrera S or 4S doesn’t feel too far behind — 911 Turbo S will completely blow it out of the water. Of course, our test car was riding on those Blizzaks, meaning this wasn’t exactly the normal GT-R launch experience. Let off the brake with the throttle pinned, and all that torque sends the rear skittering sideways while the front tires claw you forward. It required counter steering away until everything was straightened out and we were back barreling down the road. Summer rubber and a warm track will likely return entirely different, tamer results. By contrast, we’ve found Porsche’s gut-punch rocket launch to be clinically precise regardless of conditions, which is impressive but also a bit boring. 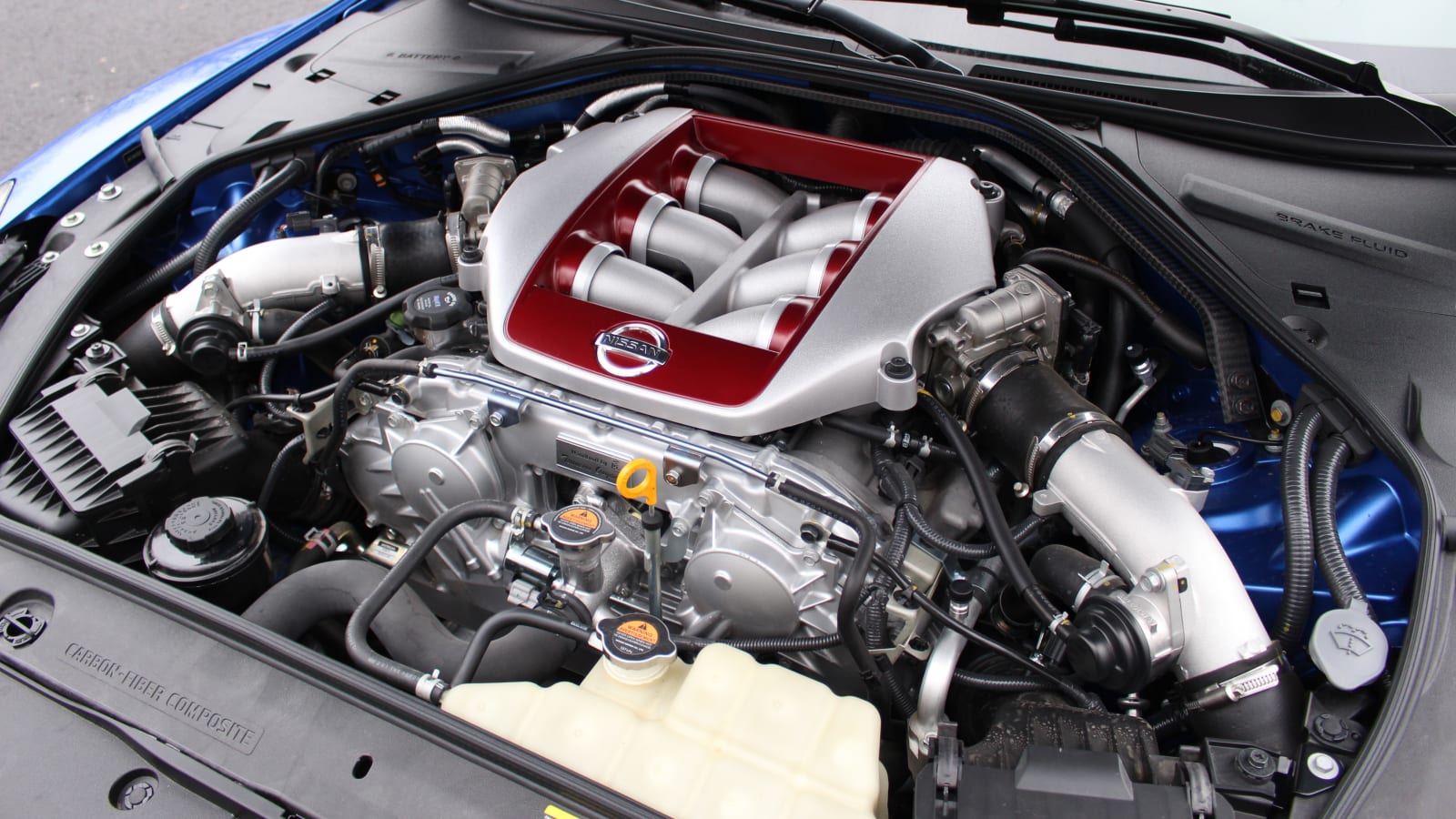 The powertrain’s entertainment value is off the charts for being as old as it is. This engine has grown more potent over the years, and the response and thrust measures up to the best boosted engines of today, be it a six-cylinder or V8. There’s no letup in the feeling of acceleration as speeds climb — it builds and builds with no end in sight for road limits. Newer power plants have come, but this V6 is still a brilliant beast.

Nissan’s transmission is a mix of good and bad. It’s a dual-clutch six-speed transaxle, but it’s not like most new dual-clutch transmissions, because this one shifts sequentially — you know, racecar style, if the racecar were an automatic. That means that when you floor it on the highway, it must go 6-5-4-3 in order, as opposed to just a single 6-3 shift. The wait for that shove in the back is agonizing compared to the instantaneous accelerative response you get from other sports cars. This issue goes poof on a backroad. Just pop it into manual mode, and leave it. The paddles provoke-super quick (but not quite PDK-quick) shifts. Nissan’s automatic shifting logic in the transmission’s R mode is a worthy alternative to doing it yourself, too, as it smartly holds gears and downshifts as soon as you start scrubbing speed.

The ATTESA E-TS all-wheel-drive system is a work of art, even by today’s standards. That said, it can easily catch out the unaware. It sends 100% of the torque to the rear wheels in most situations, but can divert as much as 50% forward should you need it. This means the GT-R drives like a rear-drive sports car, and its 565 hp makes it a supremely tail-happy one. Even small applications of the throttle cause the tail to step out when you’re driving quickly through corners. It forces you to work and pay close attention to how much power you let loose with the wheel turned. Otherwise, Godzilla is going to bite you.

All the chassis tweaking and tuning over the years has resulted in a sports car with impeccable handling, no matter its 3,867-pound curb weight. The GT-R drives a lot lighter and smaller than it looks. Its sheer amount of mechanical grip lets it hold and hug onto corners with tenacity, even with the winter rubber. You’ll never need to take it out of the Normal damper mode on the road, as the full R ride is racecar-stiff resulting in a bumpy on-road ride. It’s raw, engaging and full of feel. I’ve only driven one modern car with a higher level of intensity in every aspect of the driving experience: the new Ford GT. 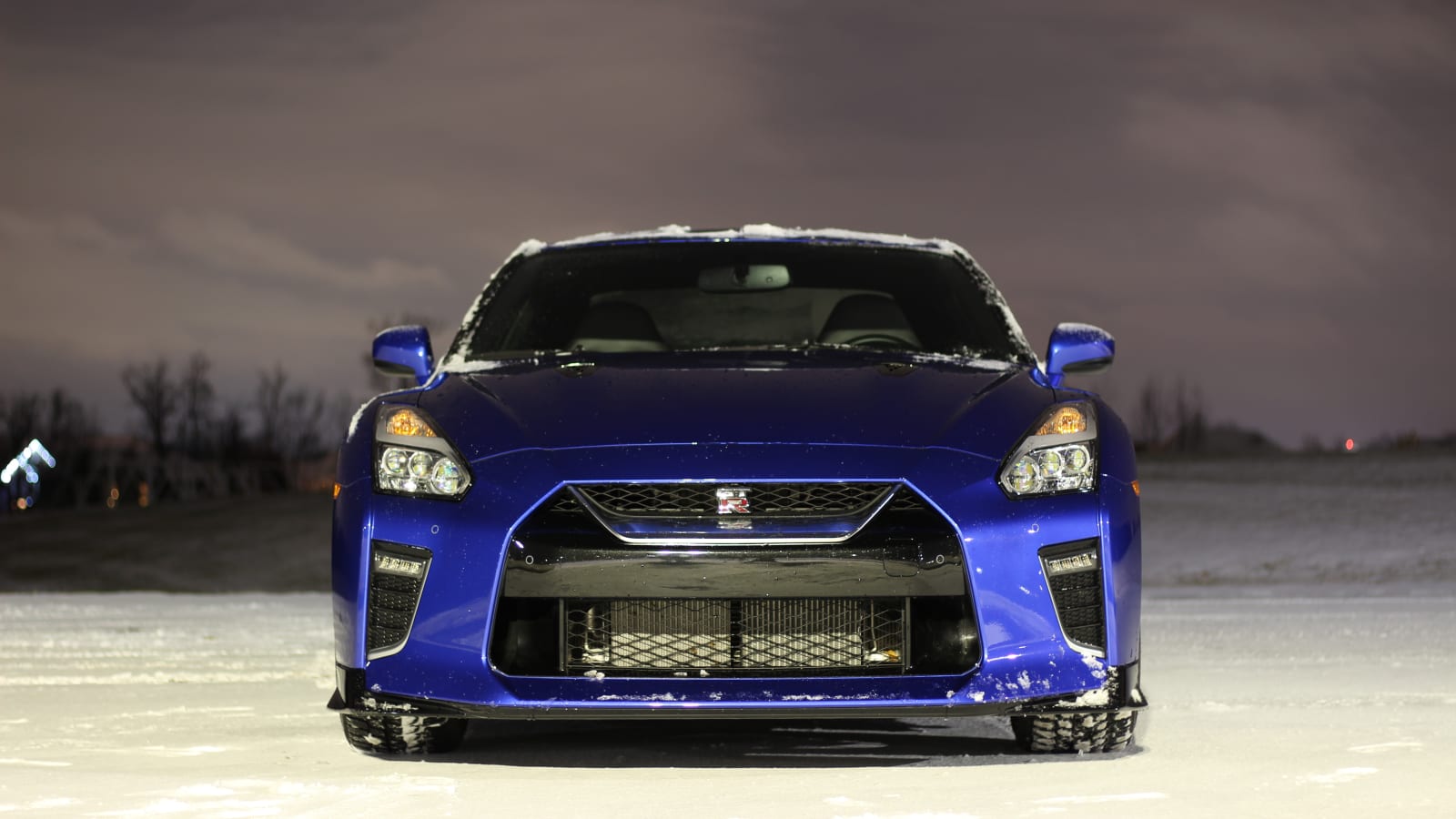 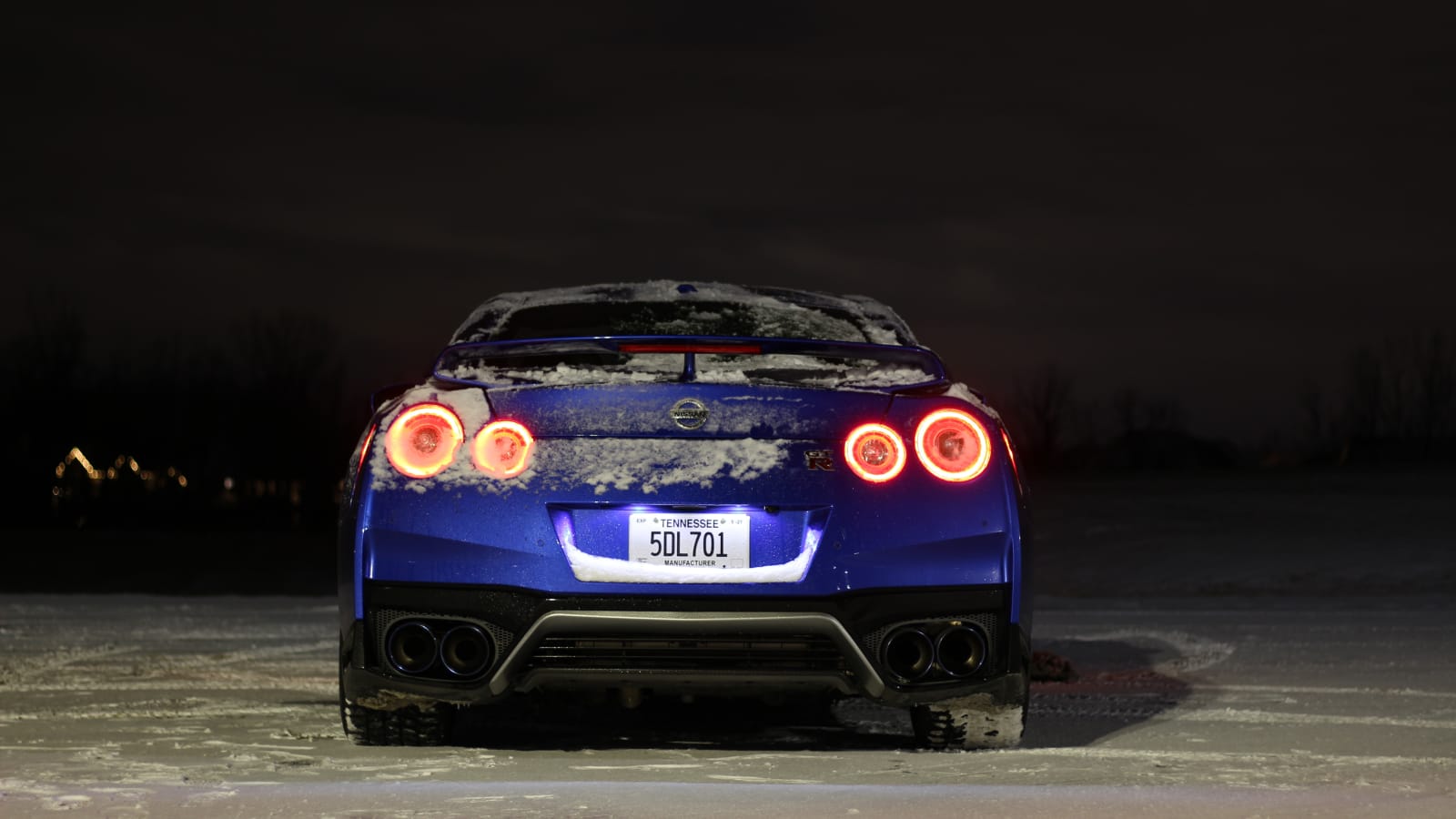 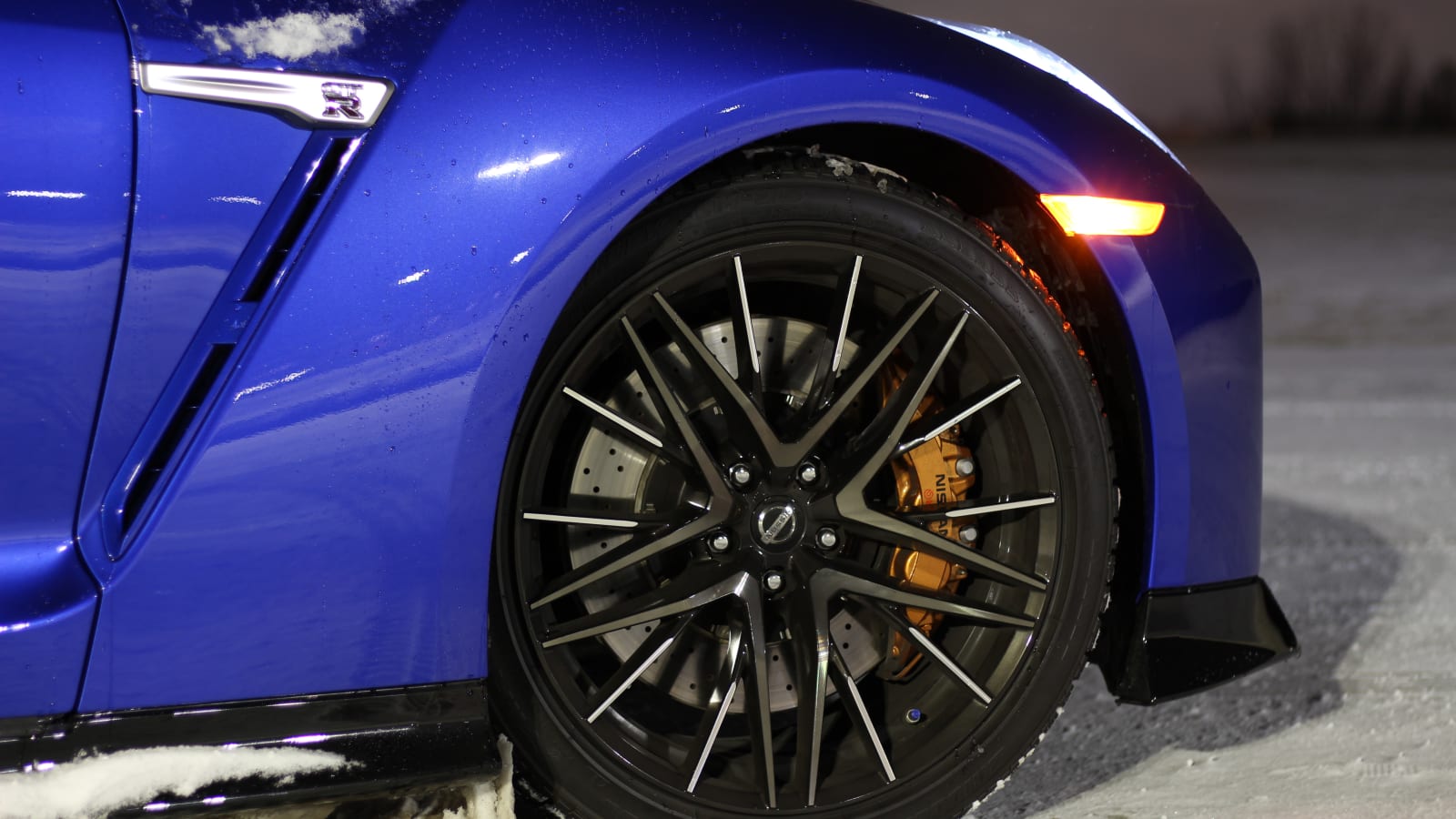 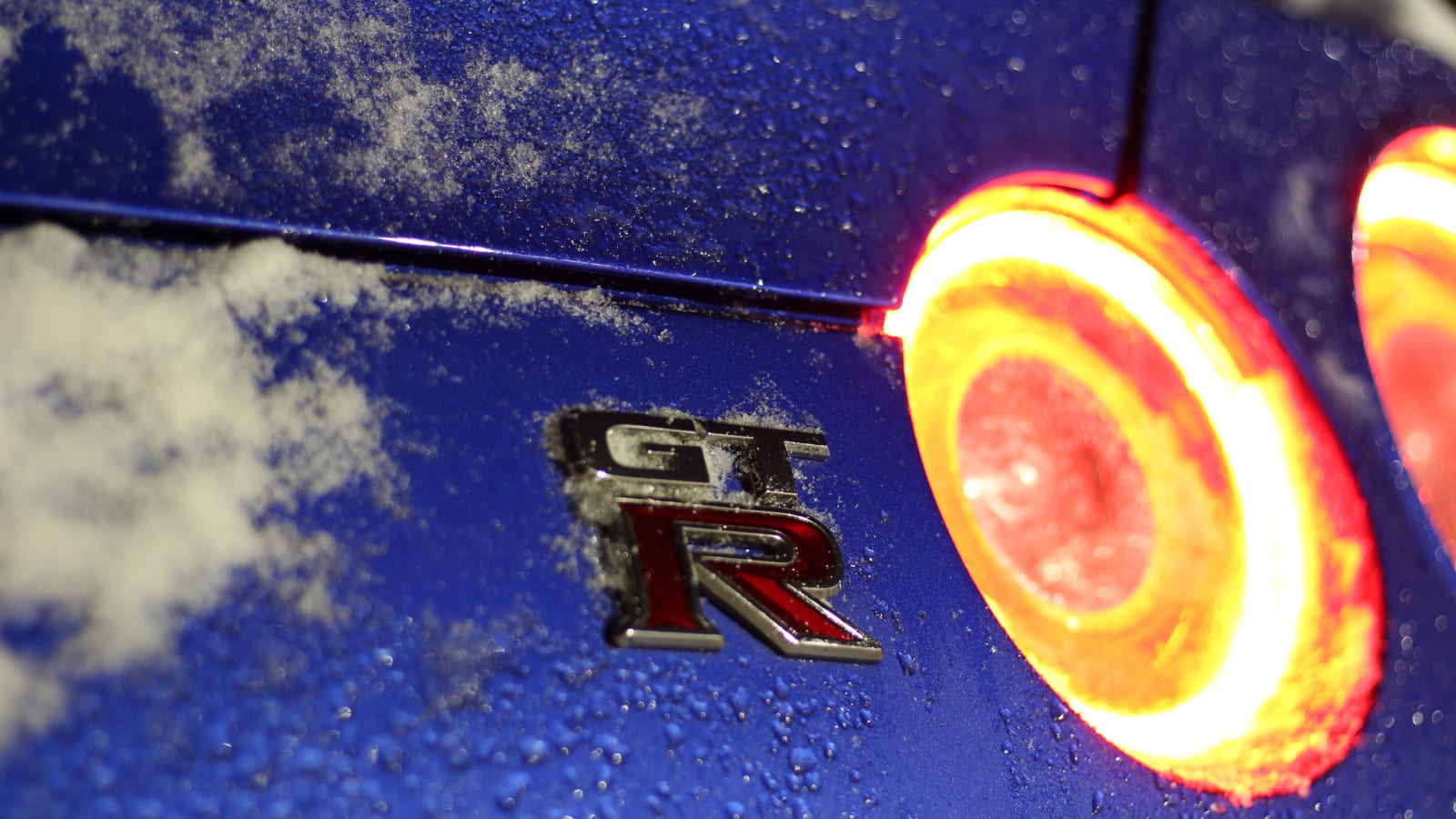 All the snow coming down made experimenting with the AWD all the more entertaining and educational. Switch everything off, and you’ll be cackling to yourself in every empty, snowy parking lot. It’s stupid-easy to send sideways and then control the drift thereafter. Grip on snow-covered roads is laudable with the Blizzaks, too. That AWD system always sends the power where it needs to go for blitzing acceleration on slick surfaces without any terrifying antics. Anybody wanting an all-weather sports car can find it in the GT-R, because this thing is a riot no matter the weather.

Driving the GT-R every day is still a mixed bag, though. The adjustable Bilstein dampers soften up more than expected in full Comfort mode to provide a decent ride, but a 911 is still far more coddling. That titanium exhaust that is so invigorating at speed drones horribly on the highway if you go much above 70 mph. The lack of any driver assistance features shows its age further. And while the infotainment system has apps like Apple CarPlay and Android Auto, it’s horribly dated versus the newer tech-heavy competition.

Your other options at the GT-R’s $115,335 starting price ($121,040 as tested) are the biggest obstacles to leap over. The 911 is damn near perfect, and you can get a Carrera 4S for a few grand more. Chevy will sell you a Corvette that can put up similar performance figures for nearly half the GT-R’s price. Though, neither of those cars impart the same raw, intangible quality to the drive that the GT-R can. It’s hugely ironic, considering the GT-R was the video game-like performance car back when it came out. The latest fleet of sports cars to hit the block are even more digital and easier to drive quickly than the GT-R is today, moving the goalposts yet again for qualities like steering feel, NVH and everyday refinement/comfort. That backs the GT-R into a spot that is polar opposite from where it began. In 2021, Godzilla is the pricey, off-beat enthusiast’s pick for someone who wants an unfiltered modern sports car. Funny how much can change in a decade.