The 2021 Nissan Armada full-size SUV got a bit of a makeover for the new model year, with a nip and a tuck in the front and the rear; a big, new infotainment screen and other techl; a reshuffled trim lineup and new standard features. By and large, it still feels like the same three-row, truck-based ute as before, which is essentially a less expensive version of the Infiniti QX80.

We like that it’s straightforward, with only one engine — a beefy, naturally aspirated V8 — and a choice between rear- and four-wheel drive. On the flip side, there’s less of a chance to customize it through options and packages compared to its rivals like the Toyota Sequoia, Ford Expedition and the newly updated Chevrolet Tahoe. Those last two competitors are especially compelling, being more modern, spacious and efficient. And while we wouldn’t steer you away from the Armada should it meet your wants and needs, we’d highly recommend you at least visit the Ford and GM lots before you commit to the Nissan offering. 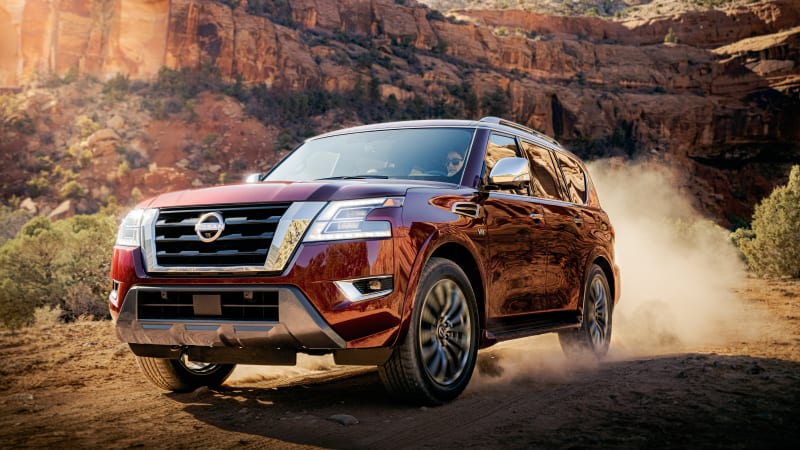 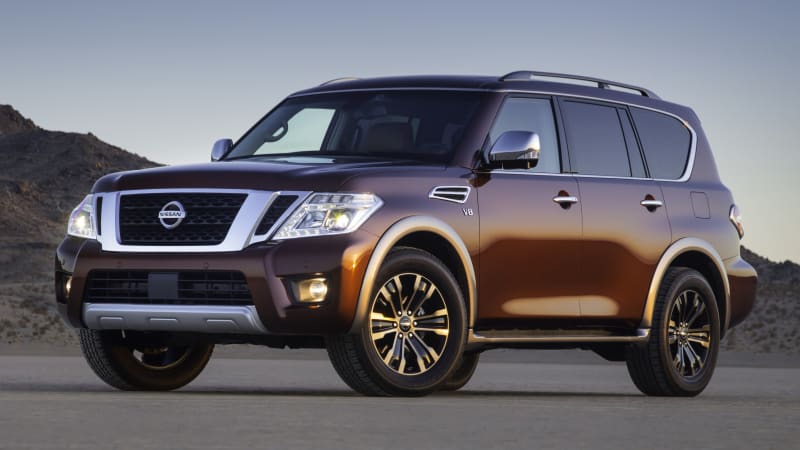 The Nissan Armada got a mid-cycle refresh for the 2021 model year. As shown in the side-by-side images above, Nissan gave it new front fenders, a new hood, new grille design and a new front bumper, improving the approach angle by two degrees. Nissan also chose to debut its new logo on the 2021 Armada, making it the first Nissan in the United States to bear it. In back, it gets new taillights (LED just like the front lights), a new adornment connecting those lights, and a restyled bumper. A new Midnight Edition model for the SL trim will black everything out if chrome isn’t your thing. Unseen are new front windows and an acoustic windshield.

While much of the interior is carried over, it gets a new center stack and loads of tech additions including a new, large 12.3-inch infotainment system (now a touchscreen), wireless charging, a USB-C port and wireless Apple CarPlay. There are also new controls for the audio and climate systems, a standard trailer brake controller, a new mode switch dial and a redesigned gear shifter. Adaptive cruise control, auto high beams and Safety Shield 360 driver assistance features are added for 2021 as well. The SL and Platinum trims add a 360-degree camera, and the Platinum gets an improved digital rear-view mirror (higher resolution) and traffic sign recognition.

Nissan managed to eke out an extra 10 horsepower from the V8, but only if you run more expensive premium fuel. Finally, the base price increased by $1,000 and is attached to a new base S trim level. The extra-plush Platinum Reserve trim was discontinued. 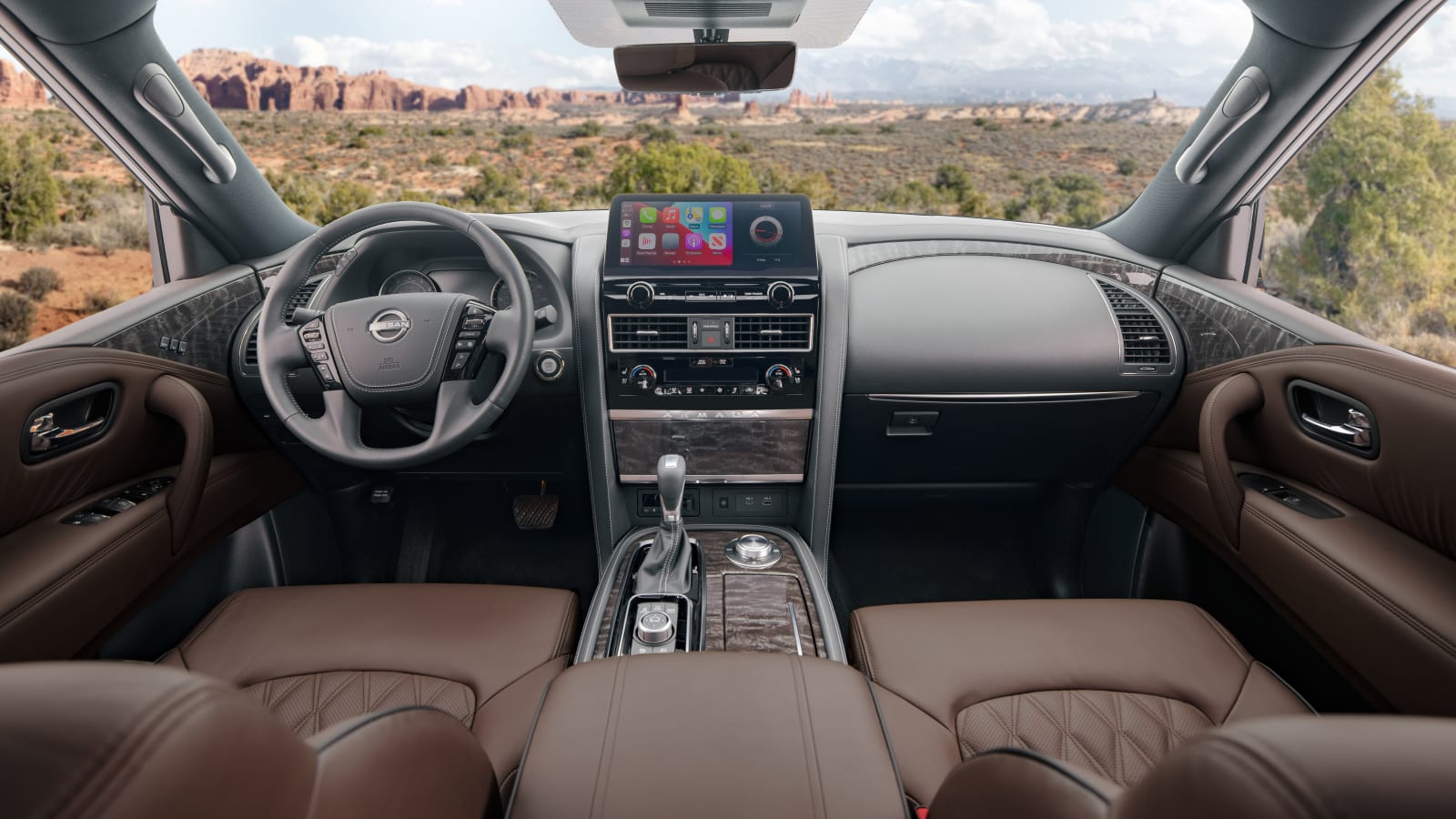 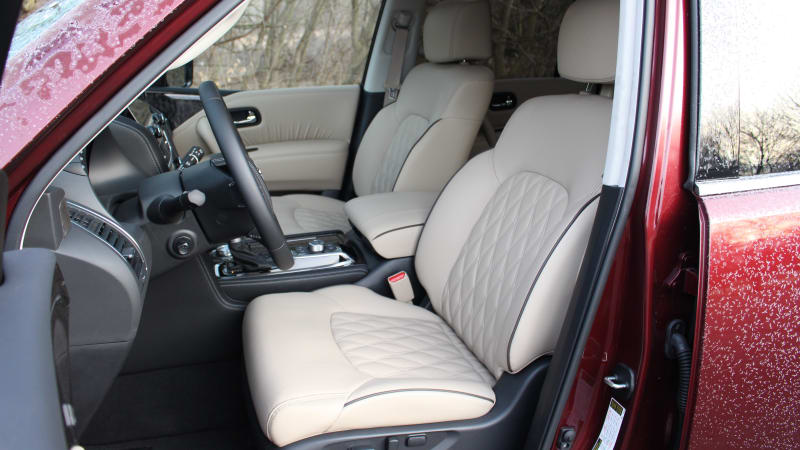 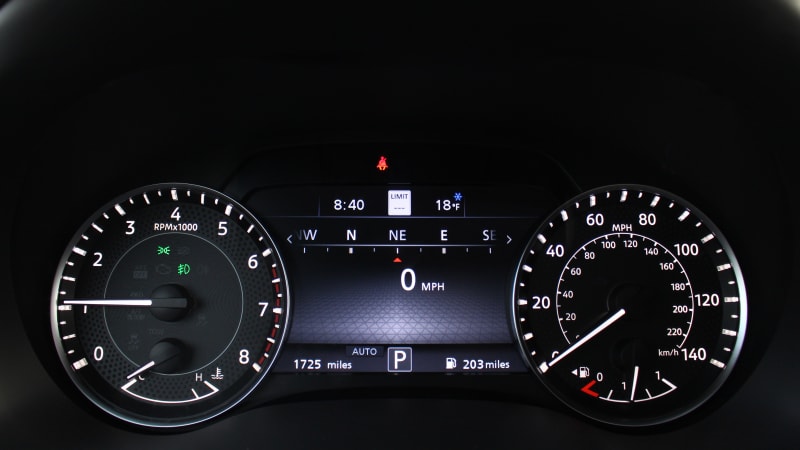 The Armada’ interior looks and feels a lot like that of the Infinti QX80, with plenty of wood and soft leather. The seating position remains high and upright, and combined with big windows, you get a commanding view of the road. The seats are wide, flat and soft — comfortable, but not particularly supportive, which is something you should consider on a test drive to make sure it feels right to you.

All the interior updates for 2021 involve the completely redesigning the center stack and gear lever surround. The infotainment system and its mess of buttons from forever ago are all gone. A huge number of superfluous buttons were trashed and those that remain have been replaced by Nissan’s current switchgear. Topping the new slab of controls is a massive 12.3-inch widescreen touch display with crisp graphics and vibrant colors. It runs wireless Apple CarPlay and wired Android Auto (both standard), but it does chop off part of the screen when you’re running those smartphone apps. We much prefer using the touchscreen controls to the fumbly rotary dial controller.

How big is the Armada?

If you’re considering buying an Armada, you should be the type of customer that often needs a lot of cargo space, a lot of seating, or both. Thankfully, the Armada does both well.

The interior of the Armada, as its oversized exterior would indicate, is quite spacious. We were able to move a 60-inch television despite having a child in a car seat taking up a seat in the second row. The high load floor is a bit of a pain when loading in bags of groceries, but better for unloading heavier cargo without having to stoop. The power-folding third row helps, too. First- and second-row seating is comfortable even for larger passengers, but the third row should be reserved for children or adults with a smaller frame.

In terms of its competition, it’s basically mid pack. The Ford Expedition has more legroom in all three rows, especially in the third row where full-size adults fit comfortably with room to spare. The Sequoia isn’t quite as big as that, but does exceed the Armada. The Chevy Tahoe and its GMC Yukon sibling now have more second- and third-row legroom than the Armada, and unlike the Armada, GM offers the longer Suburban and Yukon XL, which offer even more space. 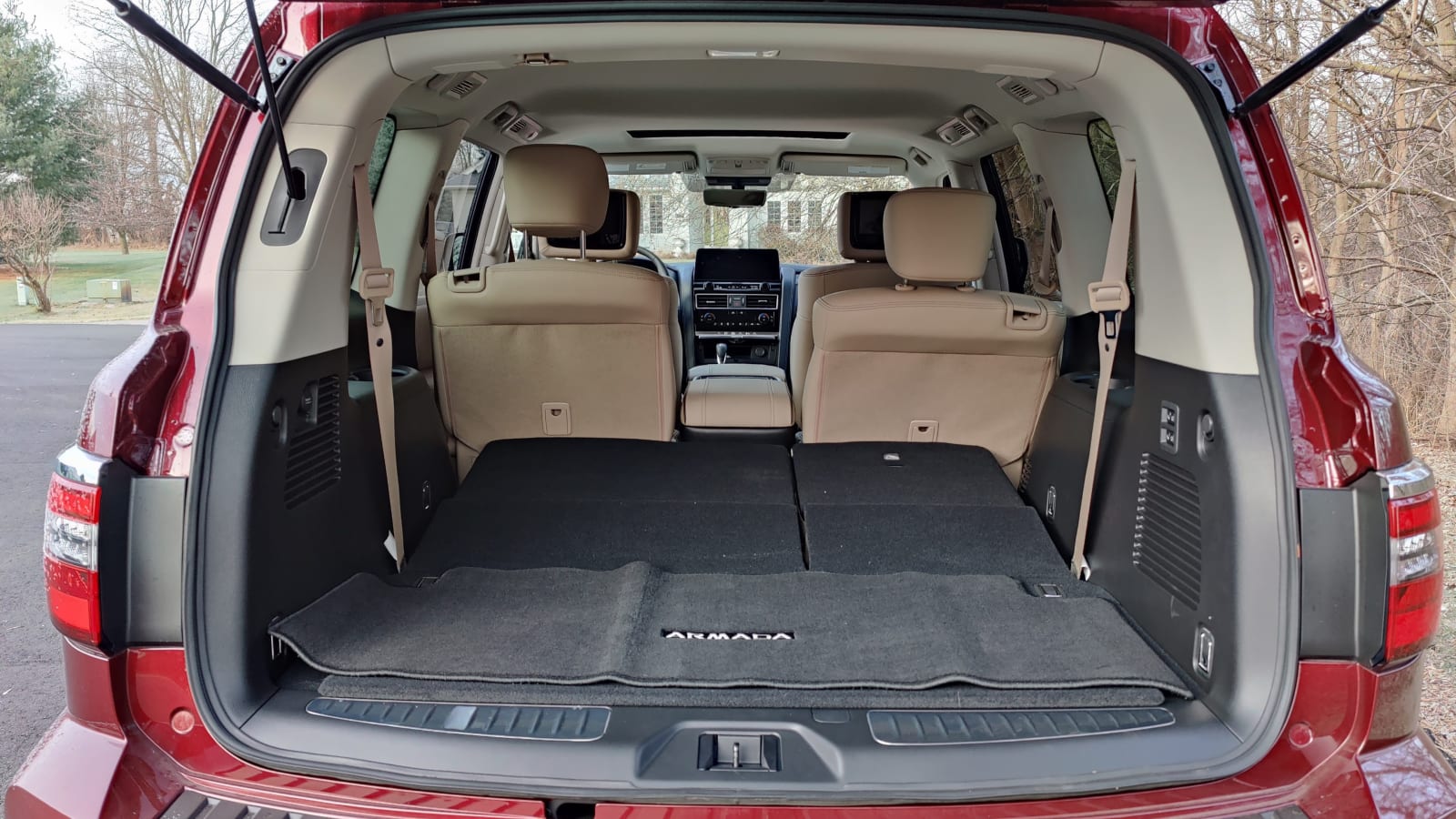 What are the Armada fuel economy and performance specs?

The Nissan Armada’s single powertrain option is a 5.6-liter V8, paired with a seven-speed automatic transmission. With 390 horsepower — or 400 when using premium gasoline — it outguns the base engines of the Chevy Tahoe (355 hp), Ford Expedition (375 hp) and Toyota Sequoia (381 hp). It produces an ample 394 pound-feet of torque.

The tradeoff for this engine is the Armada’s fuel economy. The 2WD version gets 14 mpg city, 19 mpg highway and 16 mpg combined. With 4WD, it sacrifices 1 mpg across the board, at 13/18/15 mpg. For comparison, the Toyota Sequoia is similarly poor, but the base Chevy Tahoe gets 18 (2WD) or 17 mpg (2WD) combined, while the base Ford Expedition and its powerful, turbocharged V6 gets 19 mpg regardless of drivetrain. When talking about mpg figures in this range, these differences matter a lot. 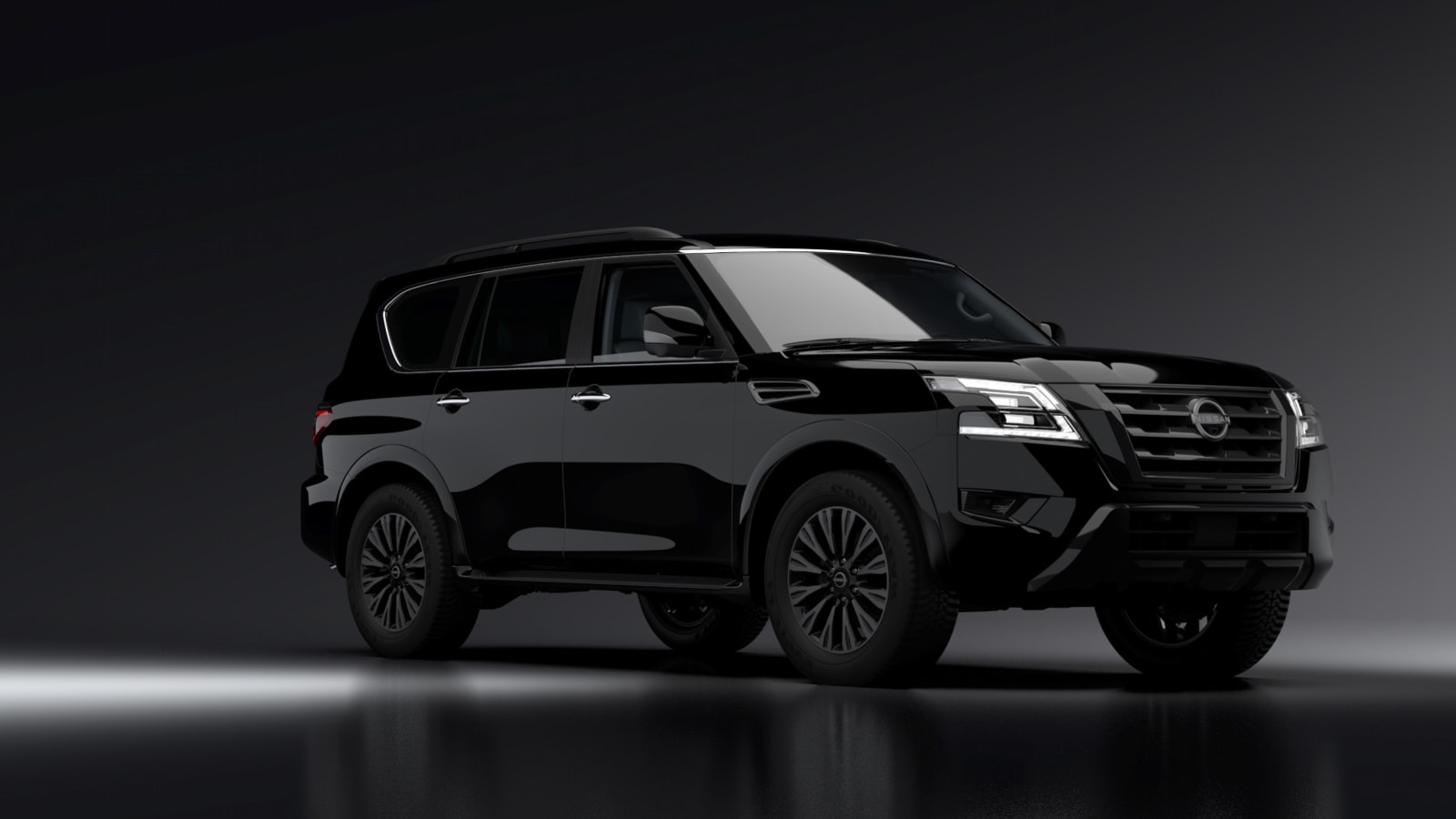 Straight-line acceleration is solid once you get the revs up, but it’s a slow and lazy-revving engine. Transmission response is decent for a big bruiser like this one, as it pops right down into low gear when you mash the throttle for highway on-ramps or passing maneuvers. There’s a bit of V8 growl that gets through into the cabin, and the new acoustic windshield does a good job of keeping unpleasant sounds out.

The Armada rides well given its off-road capabilities, but the body-on-frame construction makes itself known over potholes, frost heaves and dirt roads with some harshness and bounciness. The vague steering and lack of any lane-centering technology means the steering wheel requires more attention than we’d prefer. It’ll hold a line in a corner with some confidence, but any amount of fun you have driving the Armada will be had off-road.

What other Nissan Armada reviews can I read?

2021 Nissan Armada First Drive | Getting with the times

Road Test Editor Zac Palmer takes the first turn in the Armada since its mid-cycle refresh, and found it to be mostly the same truck underneath it all, with some welcome additions.

Our editors talk about what the Armada is like to drive in real, day-to-day traffic. They talk about the power, ride, interior and technology, and their overall impressions of the Armada in normal driving duties. 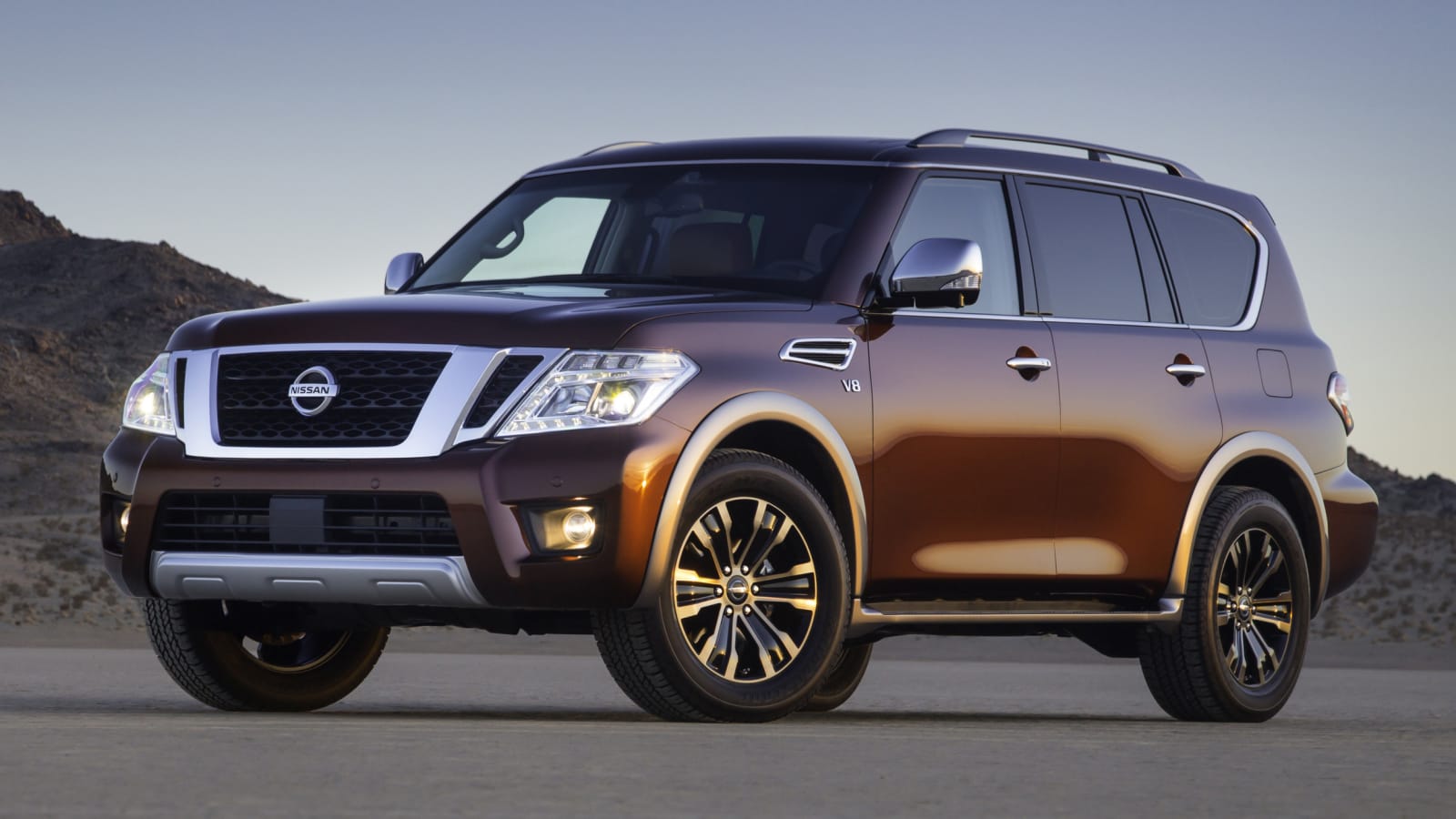 This was our first crack at this generation of the Nissan Armada, where we found it to be a good, comfortable SUV to drive despite its size and body-on-frame underpinnings. Fans of the overseas Nissan Patrol might be disappointed that this isn’t as hardcore as the SUV it’s based on, but customers looking for a cozy, three-row ute with a hint of luxury for a reasonable price will be pleased. 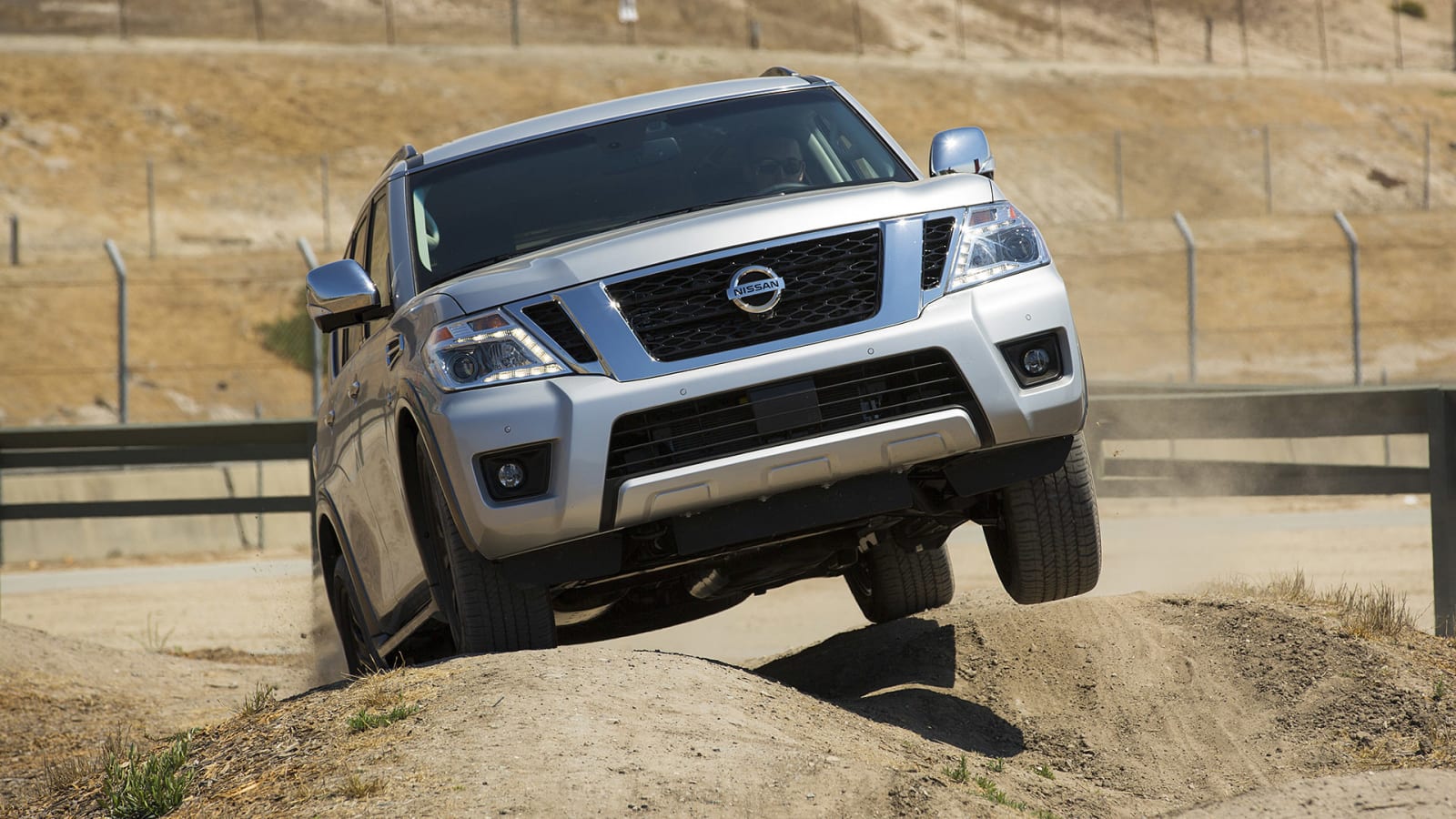 How much is the 2021 Armada price and what features are available?

Rather than list all the features for the different trim grades, you can find a full breakdown of features, specs and local pricing for the 2020 Armada here on Autoblog, but the MSRP for each trim level and its base body style/drivetrain combination is listed below with destination included:

What are the Armada safety ratings and driver assistance features?

Apart from rollover, where Armada earns three out of five stars, the National Highway Traffic Safety Administration hasn’t crash rated the 2021 model, as of this writing. The 2020 model earned 4 stars overall, with a three-star front crash rating, five-star side rating and three-star rollover rating. We don’t expect that rating to change for 2021.

As of this writing, the Insurance Institute for Highway Safety hasn’t rated the 2021 Nissan Armada.