88-year-old commercial driver keeps on truckin', and earning praise for it

The 2021 Mercedes-Benz E 450 All-Terrain joins the “year of the wagon” conversation started by Audi in 2020. The parallels run deep, in fact. Like its cross-country rivals, Benz has adopted a two-pronged approach to the traditional concept, offering its long-roof E-Class in both this off-road guise and the balls-to-the-wall AMG E63 variant. The All-Terrain goes head-to-head with Audi’s A6 Allroad, which was revived here in the States last year after a decade-long absence. Better late than never on both counts, right?

Mercedes-Benz strictly adhered to the Allroad playbook in creating the E 450 All-Terrain. It too makes use of a turbocharged six-cylinder engine with a mild hybrid system and standard all-wheel drive. Paired with a trick suspension and some lower body cladding, the All-Terrain is intended to be rugged enough for when you need it, but low-slung and car-like when you don’t. Sounds great in theory, right?

With the smaller, lighter Audi A4 Allroad, the formula works. The A4 feels taller than normal, but not tippy, and its suspension tuning is firm enough to say “wagon” through its body motions more so than “SUV.” At this enlarged scale, though, the experience is a bit more diluted. There’s dive and roll aplenty, and although the E 450’s 362 horsepower and 396 pound-feet is certainly nothing to sneeze at, it’s not going to make the big All-Terrain feel particularly fast considering it has 4,500 pounds to lug around (300 pounds more than the E 450 sedan, for those keeping track). 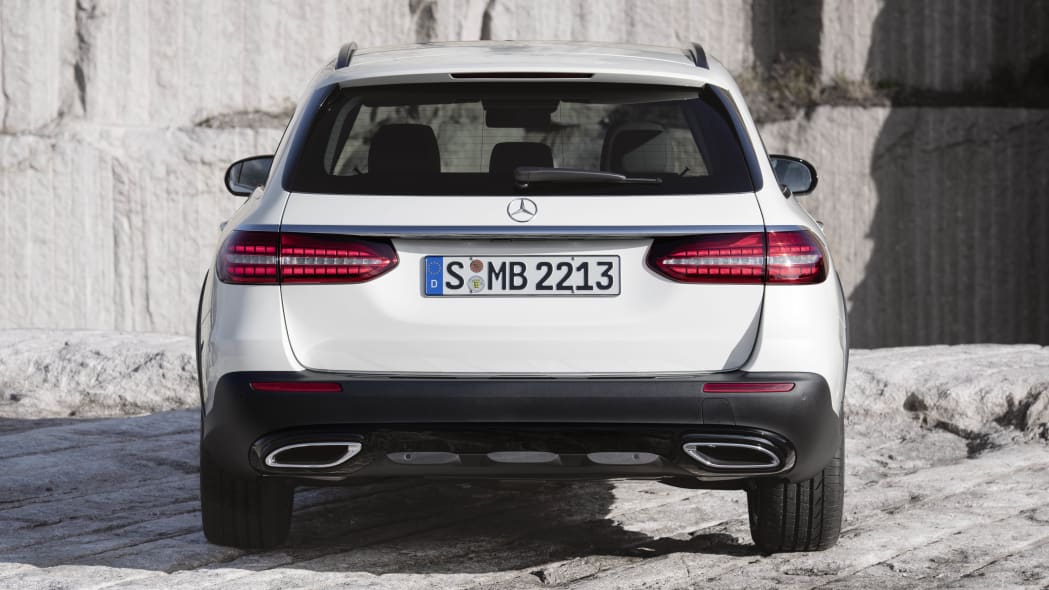 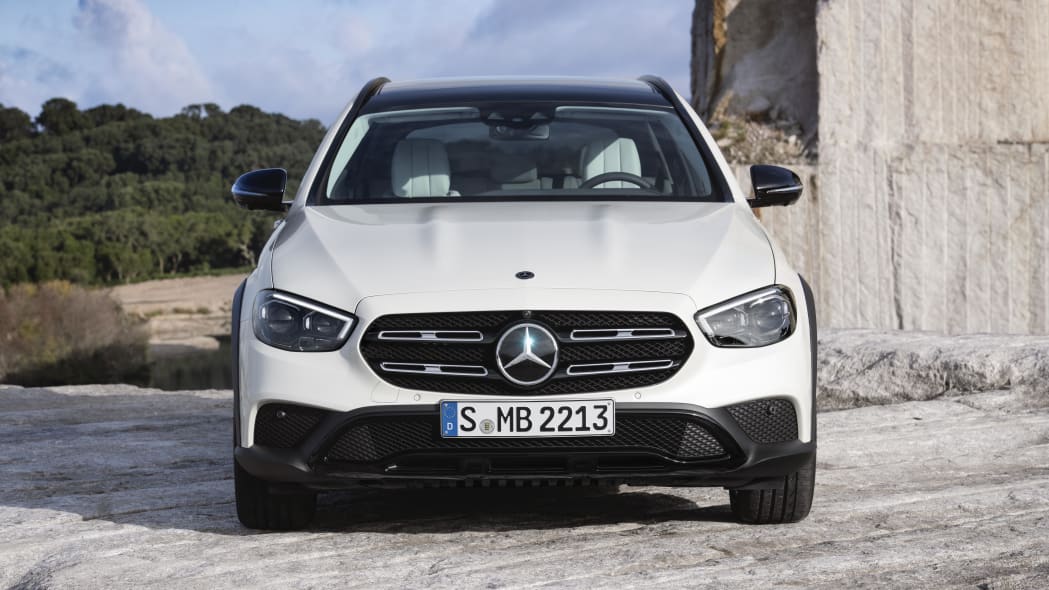 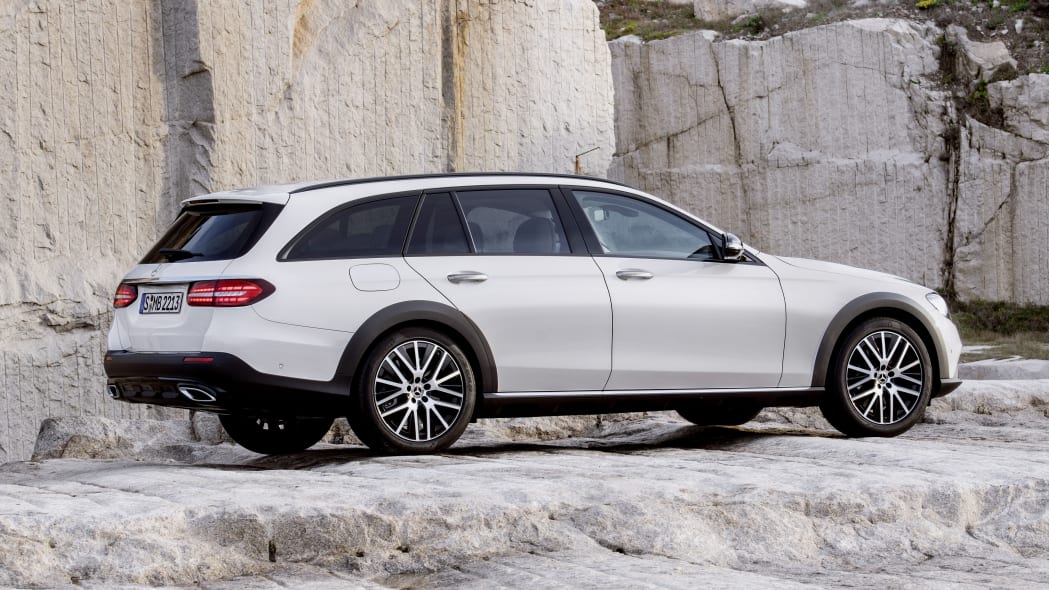 The All-Terrain, like the A6 Allroad, eschews a taller, static ride height in favor of a height-adjustable air suspension, the earliest incarnation of which put the original A6 Allroad on the map back in the early 2000s. These variable-height setups seem outstanding in theory: You can ride low for improved fuel economy and handling, then sky-high for maximum clearance and to give your luxury wagon that butch off-roader look. Unfortunately, that’s not the reality.

Mercedes-Benz claims the All-Terrain sits only 5.75 inches off the ground at its maximum rated load. Of that, 15 mm (or about 2/3 of an inch) comes from the air suspension’s baked-in lift. You can get another 20 mm (approximately 3/4 of an inch) in “All-Terrain” mode, for a total of just over 6.5 inches. For comparison, the Volvo V90 Cross Country‘s static suspension towers over it at 8.3 inches, while the typical crossover (even those that’ll never have a prayer of going off-road) are at least in the upper 6-inch range. In other words, for something dubbed All-Terrain, it has barely more all-terrain clearance than a regular-old car.

It’s also important to note that its maximum height, such as it is, can only be achieved at speeds up to around 22 mph (35 km/h). Such a low-speed lift is great if you happen to roll up on a freshly fallen tree limb after an unexpected storm and just need a liiiittle more height to clear it, but it’s inherently a temporary feature that’s bound to be rarely utilized. People seek extra ground clearance for numerous practical purposes (the Volvo Cross Country models, Subaru Outback, original A6 Allroad and SUVs in general exist for good reasons), and sure, there’s the matter of people actually liking the high-riding look. The E 450 All-Terrain barely satisfies either. 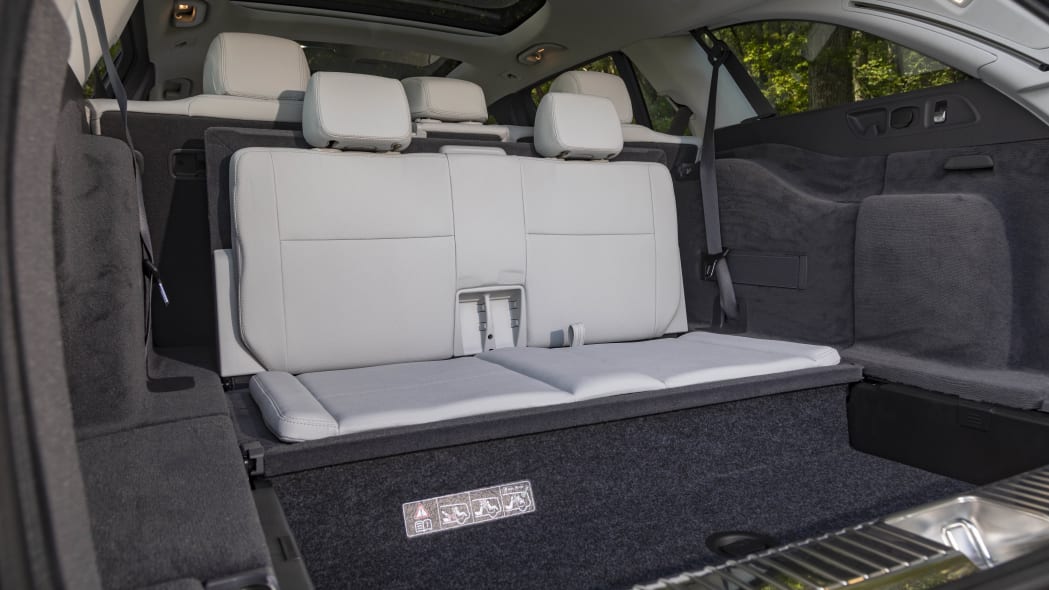 The All-Terrain’s fold-flat rear jump seats also don’t do the otherwise cavernous rear cargo area any favors. Mercedes says it’s good for 35 cubic feet, which puts it dead in the middle of the two figures provided for the GLE SUV (33.3 cubes standard; 39.3 if you opt for the adjustable second row). Mercedes tends to be conservative in its measurements, so the space is likely more usable than it looks to be on paper, but that would theoretically apply equally to its higher (by an inch) sibling.

As a luxury, car, though, the All-Terrain knocks it out of the park. Ride comfort is superb, and Mercedes cabins still set the standard for the mainstream luxury segment. The tech is also robust from a content standpoint, though the Mercedes-Benz User Experience (MBUX) infotainment system is a bit too in love with its own menu structure. We’d like to see the large center screen house more of its widgets in a single view. As it sits, finding anything requires a lot of swiping, which draws your hands away from the wheel and your eyes away from the road. We could also do with about half as many steering wheel controls and we don’t like the touch-sensitive wheel toggles any more than we did when Mercedes first gave them a whirl with the introduction of the 2016 E-Class.

Instead, the easiest way to toggle a feature is often to simply ask for it. Just say, “Hey Mercedes, turn on the heated steering wheel,” and voila, done. You can use this as a shortcut for just about everything, and while MBUX may be cluttered and multi-layered and offer about five times as many redundancies as it needs to, the fact that you can merely ask for things out loud certainly streamlines the process. Of course, none of these are unique to this particular model. 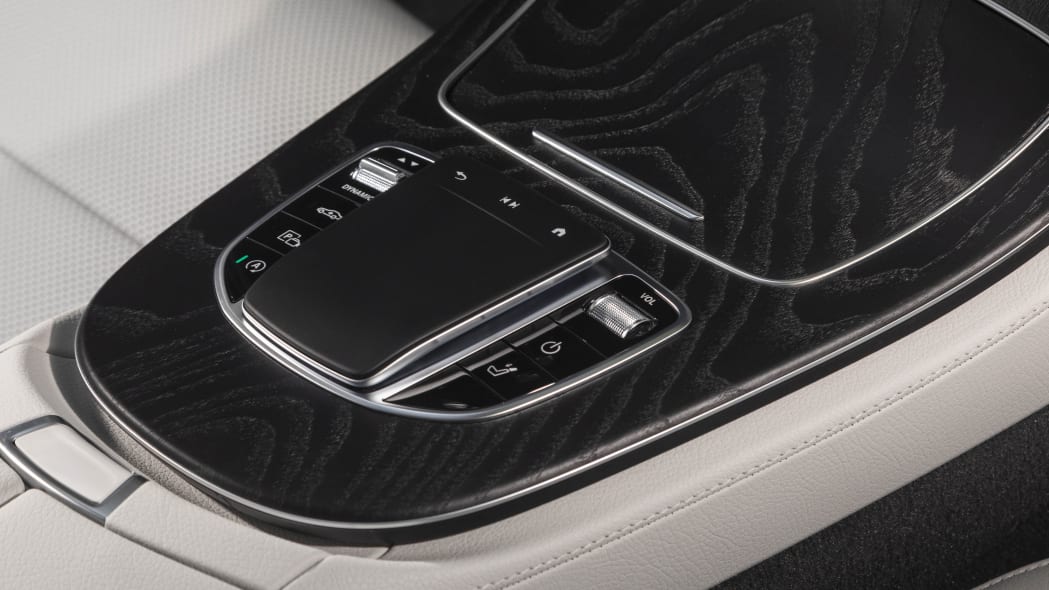 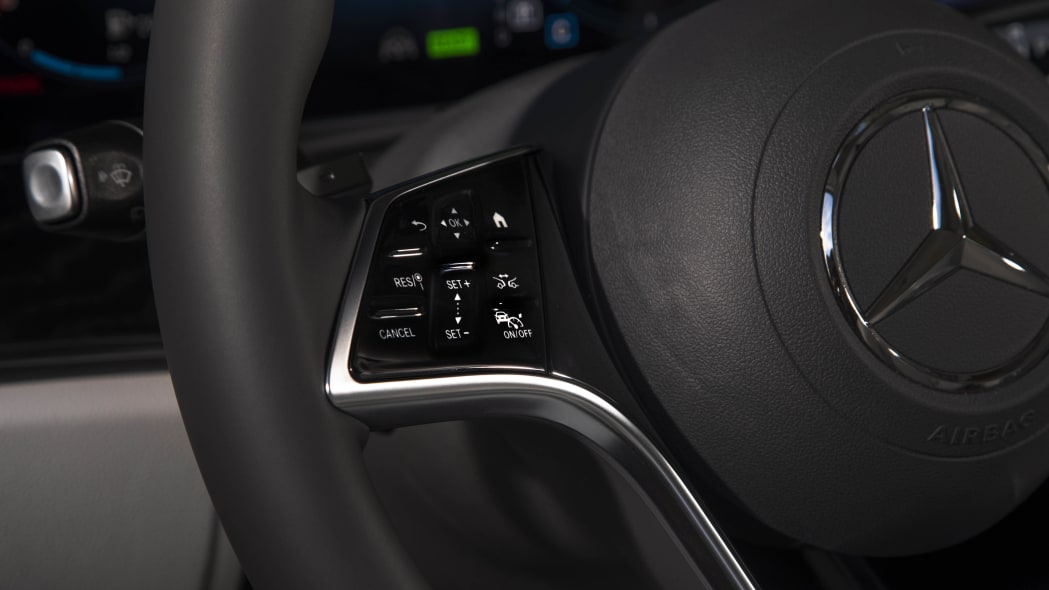 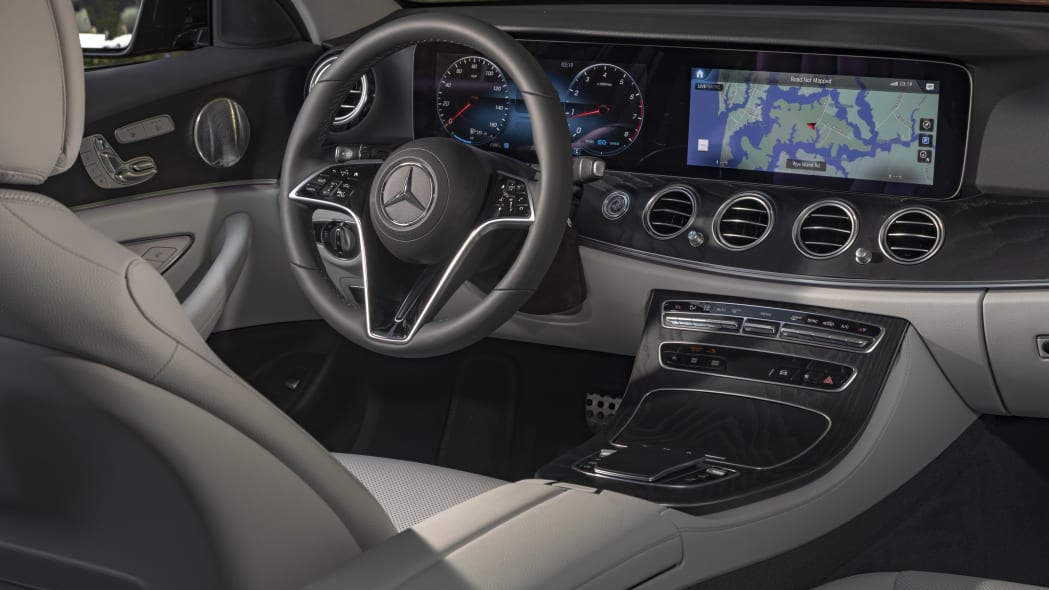 What the All-Terrain ultimately offers is a different lifestyle image, because it certainly doesn’t enhance the E-Class’ capability as that original Audi A6 Allroad and other off-roading wagons do. Those are vehicles for the person who wants the versatility and capability of an SUV, but doesn’t want an SUV due to the driving experience, appearance or just because they like being different. They’re a rare breed, but they do exist. The trouble is, the E 450 All-Terrain and A6 Allroad don’t really deliver for them. They may have the space of a midsize crossover, but they aren’t better to drive on road or approach their capability off-road – even if that just means a grassy field or a steep, snowy driveway. At the same time, they’re worse to drive and offer little functional advantage (if any) over the plain-old luxury wagons they’ve replaced.

That’s right, the E-Class is no longer sold here as a plain-old wagon, so if you want a long-roof ‘Benz, the All-Terrain is now your only option. The same holds true for Audi. The only real standout in this regard is the Volvo V90, which is both premium (but not Mercedes/Audi levels of premium) and offers both lifted and un-lifted variants. The V90 Cross Country is also about $10,000 cheaper, which makes it that much more compelling.

Yep, 10 large. The All-Terrain starts at $64,850 (including $1,050 for destination; a new Audi A6 Allroad 55 TFSI Premium Plus with zero options is also a $67,000 car. The V90 Cross Country is admittedly less powerful, but it comes virtually loaded for the basic cost of entry of either the Benz or the Audi, especially in light of the eye-watering $82,440 all-in price of our E 450 tester.

Also cheaper than the All-Terrain is the Mercedes-Benz GLE SUV, which can be had with the same bi-turbo six-cylinder for about $5,000 less (or about $15,000 less if you’re willing to settle for the turbo-four). And yes, the GLE is plenty nice to drive. Seriously.

For what it is, the All-Terrain is quick enough, luxurious enough and Mercedes-Benz enough to do its job. Whether it’s a better fit than a “true” CUV is really an individual purchasing decision, but we would caution you to try before you buy, as you may not find the drive experience as satisfying as you might expect. It’s not that Mercedes-Benz cannot (or does not) build fun wagons; this simply isn’t one of them. Practical and different? Yes. An upgrade over the GLE or old E-Class wagon? Eh, not really.