The Mazda CX-30 is already Mazda’s second-best-selling vehicle after the CX-5, and it’s only been a year since the little crossover went on sale. It’s easy to guess why — the CX-30 is an affordable and stylish crossover. What makes it a meritorious vehicle, however, is that it’s essentially a lifted and crossover-ized version of the Mazda3 Hatchback. We adore that little car, and the CX-30 essentially brings its greatness to the masses.

Now for its second year on the market, the CX-30 is following in the well-trod footsteps of the Mazda3 yet again. Introducing the 2021 Mazda CX-30 2.5 Turbo. This turbocharged variant of the CX-30 comes just a few months after Mazda launched the more powerful, turbocharged version of the 3 hatch. So in short, Mazda hit copy on the 3, hovered their cursor over the CX-30, then hit paste.

That means the CX-30 is fully worked over with the same goal in mind as the Mazda3 Turbo. The power is there to make it feel luxurious and effortless, not to burn rubber and set lap times. This approach is surely not what the Mazdaspeed crowd wants, but it’s in keeping with Mazda’s pursuit to climb further into the premium, luxury-adjacent market. Think an alternative to the Mercedes-Benz GLA, BMW X2, Volvo XC40 and Audi Q3, all cars this CX-30 has the potential to steal sales from. Considering the upmarket features, distinctive interior design, excellent driving characteristics and attractive price, the CX-30 Turbo absolutely deserves to be in the conversation for anybody considering this tiny crossover segment. 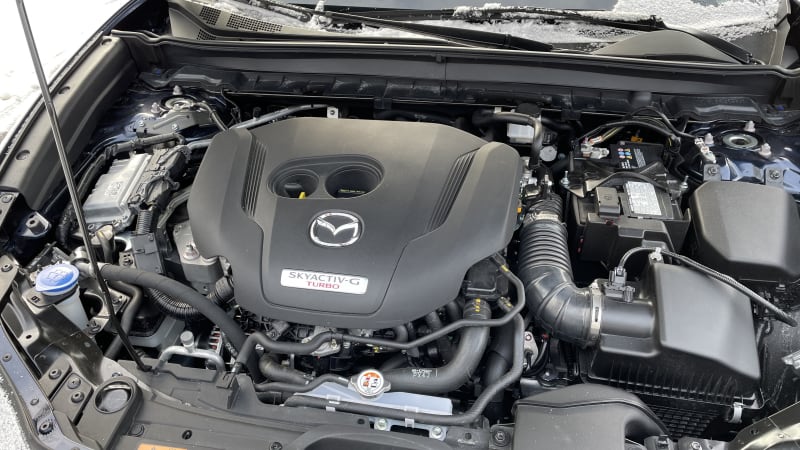 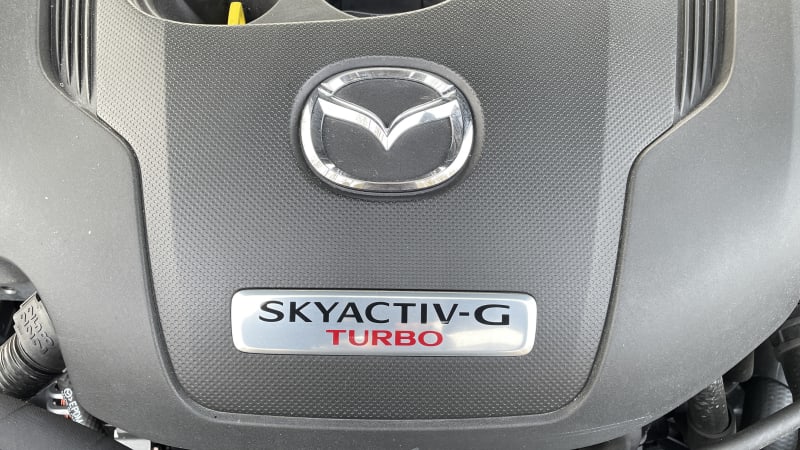 Just like the Mazda3 Turbo, the CX-30 Turbo has Mazda’s 2.5-liter turbocharged four-cylinder. It’s good for 250 horsepower and 320 pound-feet of torque when run on 93-octane premium fuel, or more realistically, 227 horsepower and 310 pound-feet of torque with 87-octane. This 2.5-turbo is mechanically the same as the engine in the Mazda3 Turbo, which is itself a minor revision of the 2.5-turbo first sold in the Mazda CX-9 and also available in the CX-5. It has a new air-to-water intercooler integrated with the intake manifold, reducing the amount of necessary plumbing, thereby improving responsiveness. The final tune is different than the Mazda3 Turbo, though. Mazda tells us that the powertrain is made to be less touchy to user inputs to reduce pitch motions in an effort to compensate for the CX-30’s higher center of gravity. The final drive ratio is also slightly changed for better drivability and fuel economy (minus 1 mpg combined versus the non-Turbo all-wheel-drive CX-30). Just like all Mazdas with this engine, the meat of the torque is all down low, and revving it out to redline isn’t particularly rewarding.

A six-speed automatic transmission is the only one available, but there are paddle shifters available to shift it yourself. All-wheel drive is the only way it comes, so there will be no monster, torque-steer burnouts like the Mazdaspeed3 was capable of. It’s a similar all-wheel-drive system as the one that comes in the Mazda3 Turbo (features a beefed-up rear differential to handle the extra torque, of which 50% can be sent rearwards), but this one also features an “off-road traction assist” mode. It’s a traction control mode that can apply brake force to wheels without traction, thereby sending torque across the axle to the wheel that does have traction. We have a sneaking suspicion the off-road crowd would rather scoop up a Bronco Sport, but in the off-chance you venture someplace sketchy in your CX-30, Mazda reckons it might surprise you. 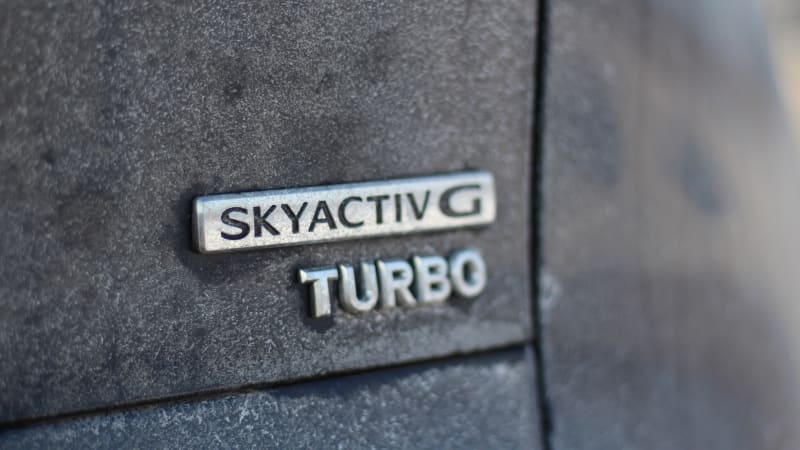 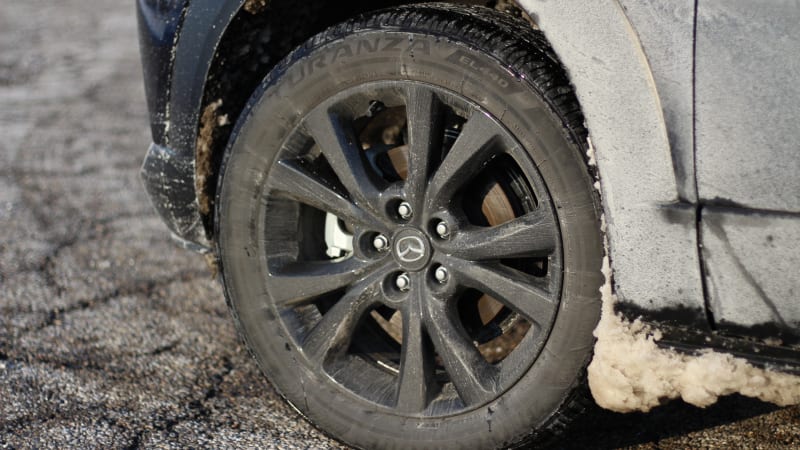 There isn’t much in the design that will differentiate a CX-30 Turbo from its non-turbo compatriots. The big, but visibly small tell is the little “Turbo” badge on the hatch. It also gets slightly larger dual exhaust tips, brushed aluminum roof rails, glossy black mirrors and glossy black 18-inch wheels. The black accents make it a touch more sinister, but it requires a keen eye to detect the differences. The only difference inside is the push-button starter is surrounded by bright chrome.

Not that such added fanciness is necessary. The CX-30 has one of the classiest interiors in any car, period, with its clean styling, driver-centric design and minimalist layout that doesn’t betray functionality. The infotainment system may have its drawbacks (specifically for controlling Apple CarPlay or Android Auto’s touchscreen-optimized interfaces), but the CX-30’s biggest disadvantage remains the same: utility. Getting in and out of the back seat is not easy with its narrow openings, and it’s not much better once you’re back there. Other crossovers this size have much more usable back seats. Its cargo capacity is also limited, even when compared to its Mazda3 siblings. Then again, all that matters much less if you’re buying the CX-30 as personal transportation rather than as a family car.

Mazda’s copy-paste job for the CX-30 Turbo continues in its ride and handling tuning. The Turbo gets a stiffer front end via front springs with a higher spring rate. It’s not meant to change anything versus the standard CX-30, but rather keep all things equal with the bigger engine’s added weight. The result is a little crossover that rides stiffer than most, but also handles better than any other in its class. While we wouldn’t complain about a little more plushness in everyday driving, we also can’t argue with how this little crossover responds when you start to push it.

Mazda has sorted it out to handle as close to a car as any crossover can. And sure, you’re still sitting up way higher than a Mazda3, but that car’s natural and athletic character is transformed beautifully into its crossover sibling. The all-wheel drive system just keeps up with the amount of torque this car is pushing to the ground now. It simply sticks and accelerates in most cases, but we detected some front wheel slippage and loss of forward momentum as soon as the pavement got a little damp.

Just in case you couldn’t tell by our photos, we got to drive the CX-30 Turbo in the snow. And it was a blast. The traction and stability control systems allow you to send the tail out with authority and fish-tail about far more than most other manufacturers’ electronic nannies would. That’s great to see, as Mazda doesn’t actually include a TCS-off switch — it really doesn’t need one, as the system is tuned to allow for wheel slip, even in snow.

Acceleration from a standstill is significantly better than a non-turbo, but it still won’t shock and awe. Power comes on in a linear fashion off idle, and the torque hits early with maximum twist coming on at 2,000 rpm. However, the excitement dies early with horsepower beginning to trail off above 5,000 rpm, prompting what feel like early gearshifts (in automatic mode) to stay in the engine’s most useful zone. That 320 pound-feet of torque is a great shove in the back, but the engine just isn’t that exciting or characterful. Put another way: As a Mazdaspeed power unit, we’d be very disappointed. As a more powerful, premium option (i.e. how Mazda is selling it), it’s perfectly workable and succeeds at its mission. In fact, it packs better or nearly identical figures to a BMW X2 xDrive28i, Mercedes-Benz GLA 250 and many others in this class.

The long-used Mazda six-speed transmission — old as that gear count makes it seem — is still one of the smarter ones out there. Pop it into Sport mode, and it’ll downshift as you’re braking into corners, then hold the low gear as you’re carving through it. Response times from smacking a paddle can’t compete with a dual-clutch gearbox, but it’s good enough that we found ourselves tapping away with a smile. The Sport mode doesn’t mess with steering weight or throttle sensitivity, but both are splendid out of the box — Mazda’s of the mind that these basic and important physics of the car (suspension stiffness, throttle response, steering weight, etc.) should stay the same for the best experience. In this case, we don’t disagree. This car bends through corners and remains balanced and put together no matter what we throw at it. The power never overwhelms either axle through corners, so expect competence, not hooliganism.

The starting price for the Turbo — $31,000 — is $8,000 more than the standard CX-30, but it’s also heavily equipped to fall in the middle of the standard CX-30’s Preferred and Premium trims. That puts the price premium more in the realm of $2,000-$3,000 versus a similarly equipped non-Turbo. Mazda also adds features to the Turbo that are not yet available in other models. Most significantly, there’s the Traffic Jam Assist that offers true lane-centering below 40 mph, assuming there is traffic around you. There’s also a new 360-degree camera that can double as an off-road camera to see your immediate surroundings, front and rear parking sensors and lastly, rear automatic emergency braking.

Fully decked out with all these features and more, the Turbo Premium Plus will go as high as $35,000. It’s only a short jump from there to a base GLA or X2, but if you want one of those with all the equipment this CX-30 has, you’re going to be paying up to and over $10,000 more. Plus, the CX-30 has oodles more power and torque than virtually any of the luxury competitors in their standard trims. Similar to most boosted Mazdas these days, the Turbo is the right call for the driving enthusiast, and it’s exemplary enough in other areas that the mainstream appeal should follow.