Take up to 50% off for select wheels at Tire Rack

The 2021 Lexus LC 500 Convertible is a blessing in the form of a car. Its 5.0-liter naturally aspirated V8 makes one of the best sounds in automobiledom, and one look will have anybody’s jaws on the ground. Climb inside, and the hits don’t stop coming.

In our specific test car, the first thing we notice are the miles of Toasted Caramel leather. It’s everywhere, and its expensive feel and quality are second to none at this price point. You can get black or red leather, but the Toasted Caramel tan is the classiest option available for the Convertible. Shades of tan on the doors, seats and headrests give it a mild two-tone look, making the color combo even more pleasing.

And once you start to look closer at the intricate stitching, quilted seat bolsters, perforations and delicate piping throughout, the LC 500’s interior will begin to truly wow with its design. Take the door panel, for example. Rarely would we wax poetically about a door panel’s design, but this one is too damn elegant to not call out. The slender and curved metal door handle looks like a sculpture, and its action is satisfyingly upscale. The checked pattern of leather in a different tone splitting the main swaths of leather is another nice touch. Little things like this can delight and bring a car’s interior from above average to excellence. The LC 500 Convertible is full of these tiny delights.

One rather entertaining bit is the trap door ahead of the center console that hides your roof operation switch. It makes you feel like James Bond fiddling around for a secret “eject” button each time you go to raise or lower the roof. But then you remember you’re in a Japanese grand tourer, not a British sports car. Your passenger has two grab handles to hold onto should the road turn twisty, both incorporated into the car’s design in a natural and classy way.

The most delightful aspect of all is overall design itself. The flat plane of a dash is interrupted by a long overhanging piece that begins at the widescreen infotainment display. This leads into a physical clock and decorative trim piece, then runs all the way to the passenger side door. Below this is a second flat expanse, giving the dash a plateau look from door-to-door.

Utility and usefulness is not top of mind in a convertible grand tourer, but the LC 500 is not devoid of road trip conveniences. The center armrest opens up to a decent amount of space. Both doors have deep enough pockets for items like your wallet, hand sanitizer and facemask (thanks, 2020). There’s one obvious cupholder forward of the infotainment controls, and a second (oddly shaped) cupholder hidden underneath the sliding center console. The rear seats are even more useless for human transport than the coupe’s, but they’re at least there for extra cargo space — not a bad thing since the convertible has the same smaller trunk as the LC 500h hybrid (the Convertible’s roof and hybrid’s battery go in the same space). By contrast, we found the LC 500 Coupe can hold a shocking amount of stuff. 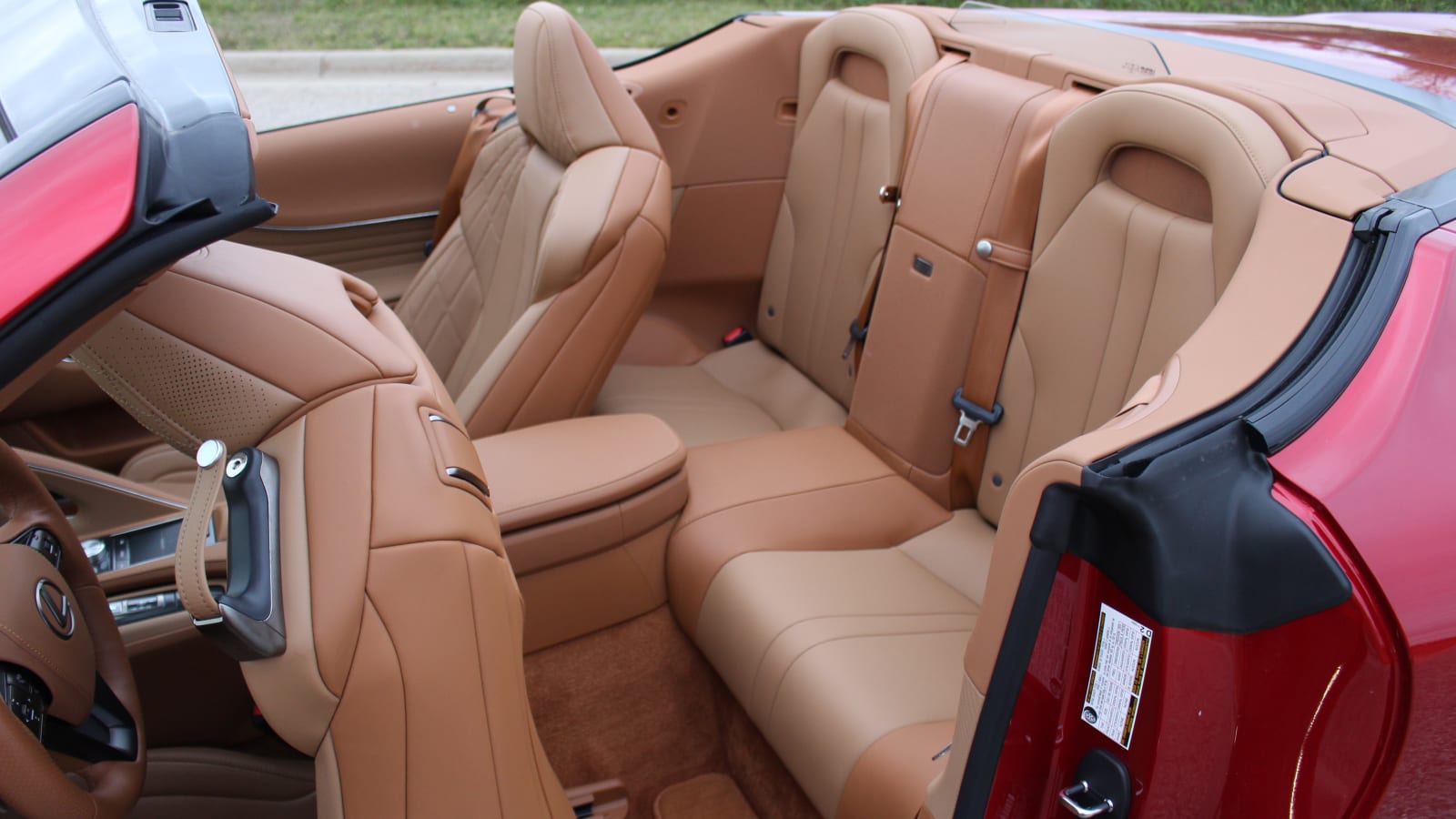 The way this convertible drives — which you can read all about in our First Drive review here — can make you forget about how atrocious the tech situation is at times, but it’s still worth pointing out. Turning your heated/cooled seat on takes eons longer than it would in most vehicles, as you’re forced to dive into menus in the infotainment system (and the “Climate Concierge” automatic function is an imperfect work-around). This wouldn’t be so horrible if the Lexus touchpad were easier to use, but even after a week of living with it, the process remains slow and cumbersome with many errant clicks along the way. Lexus would do much better if it adopted a rotary dial or touchscreen interface, though the LC’s screen placement may make that difficult (unlike in the RX).

The seat warmers combined with the neck heaters do make roof-down cruising palatable in temperatures below 50 degrees. And trust us, the exhaust is worth bringing a winter cap and warm coat along for the ride. Though, we do wish the passenger side vents could blow more direct airflow to the cabin, because the vents point toward the sky as-is. Lexus’ seats themselves are a great compromise between plushness and body-hugging capability. We never got uncomfortable in longer stints at the wheel, and were held in snugly when the road got twisty.

Even with its technological shortcomings, we’ve fallen for the LC 500 Convertible’s interior. The exterior design brings a concept car design to life, and Lexus has accomplished a similar feat on the inside. This interior is one of the best in any car today, period.