Win this 2021 Subaru Outback and fill your summer with adventure

As one of Jaguar’s top-selling models, the F-Pace serves as an unofficial ambassador for the brand’s lineup as a whole. Its rather dramatic 2021-model-year makeover coincides with an effort by Jaguar (and sister brand Land Rover) to significantly overhaul its product offerings in an attempt to adjust to changing customer tastes. Consequently, the list of updates to the 2021 F-Pace reads like what you’d expect from a complete redesign, rather than a mere mid-cycle refresh.

To give you an idea of how dramatically Jaguar is streamlining its offerings, consider this: In 2020, Jaguar sold 12 variants of the F-Pace. Starting in ’21, that drops to five: P250, P250 S, P340 S, P400 R-Dynamic S and the top-dog SVR. We say the 2021 model year, but thanks to COVID and the resulting supply disruptions, the timelines went a bit wonky. In just a few weeks, Jaguar will have 2022 models hitting showrooms.

With the exception of the SVR, each model in the F-Pace lineup is named for its approximate power figure (in PS, because British). P250 models come with a turbocharged four-cylinder making 246 horsepower and 269 pound-feet of torque. The P340 and P400 R-Dynamic S utilize Jaguar Land Rover’s new 3.0-liter, 48V mild-hybrid inline-six. The P340 offers 335 hp and 354 lb-ft, while the P400 R-Dynamic S packs 395 hp and 406 lb-ft of torque. The SVR gets a supercharged 5.0-liter V8 with 550 horses and 514 lb-ft. All engines are coupled to an eight-speed ZF automatic transmission and rear-biased all-wheel-drive system. Unlike Jaguar’s sedans and coupes, its crossovers aren’t offered in RWD form. 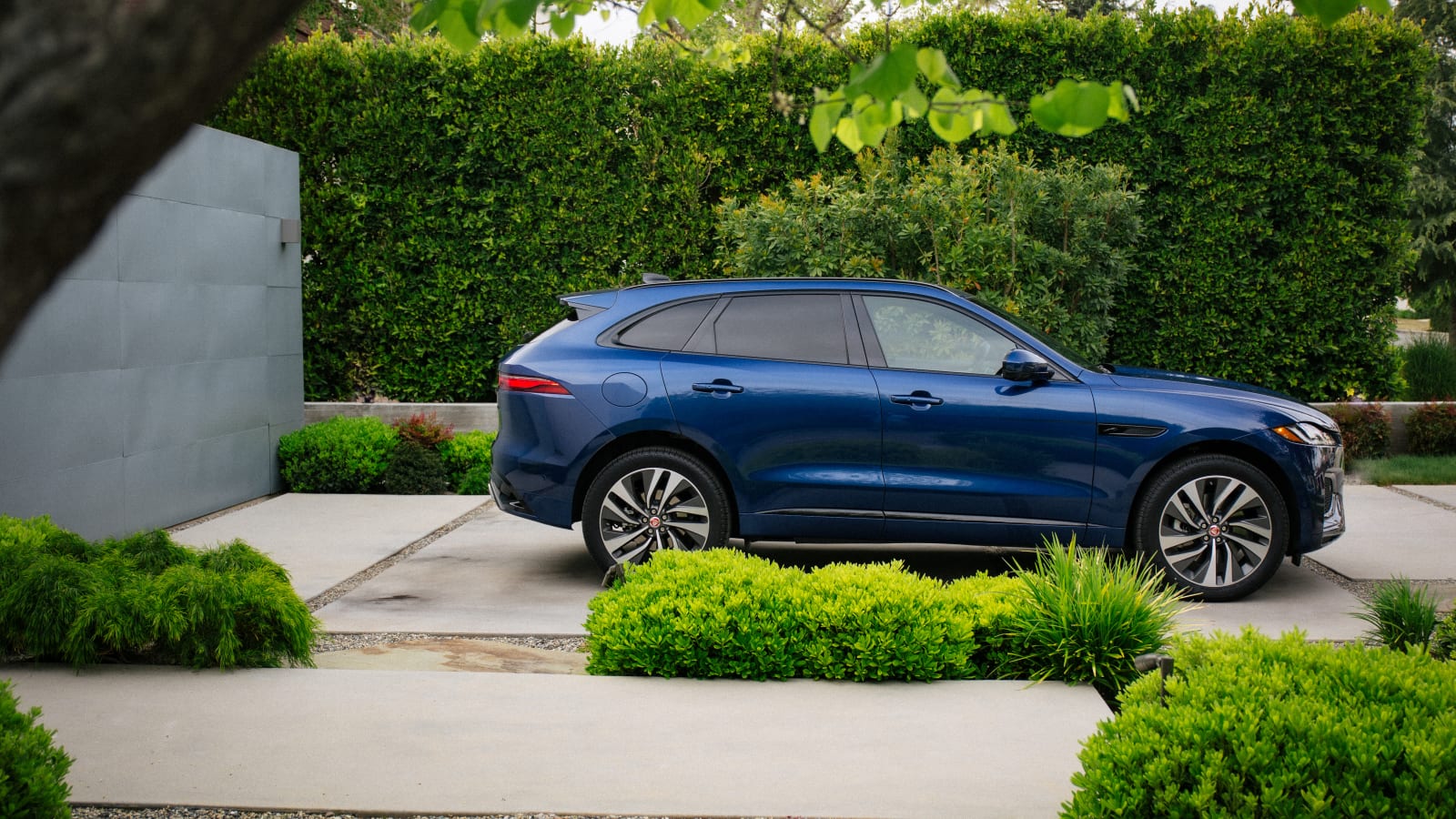 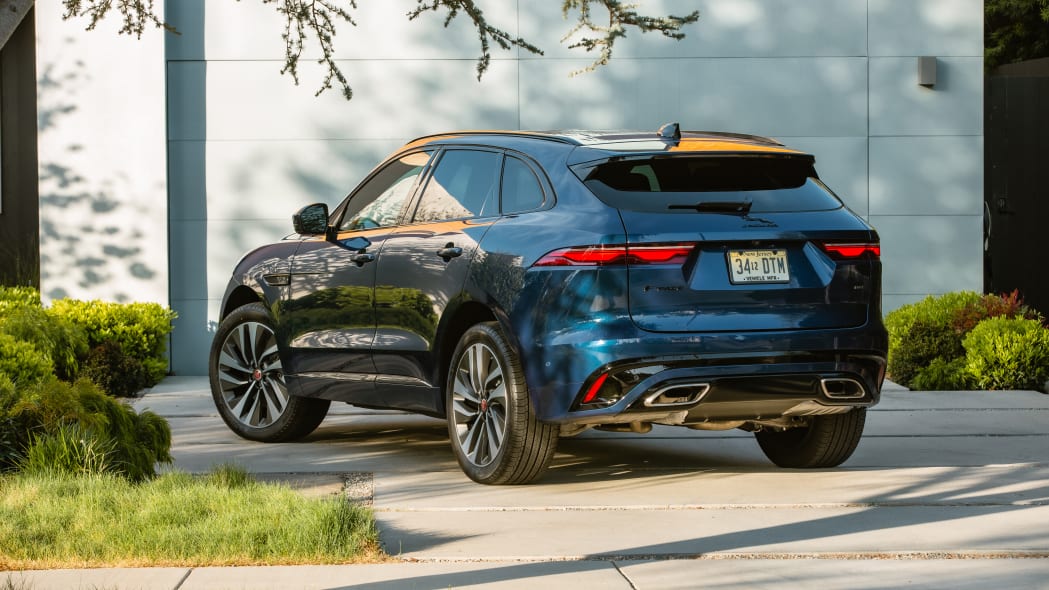 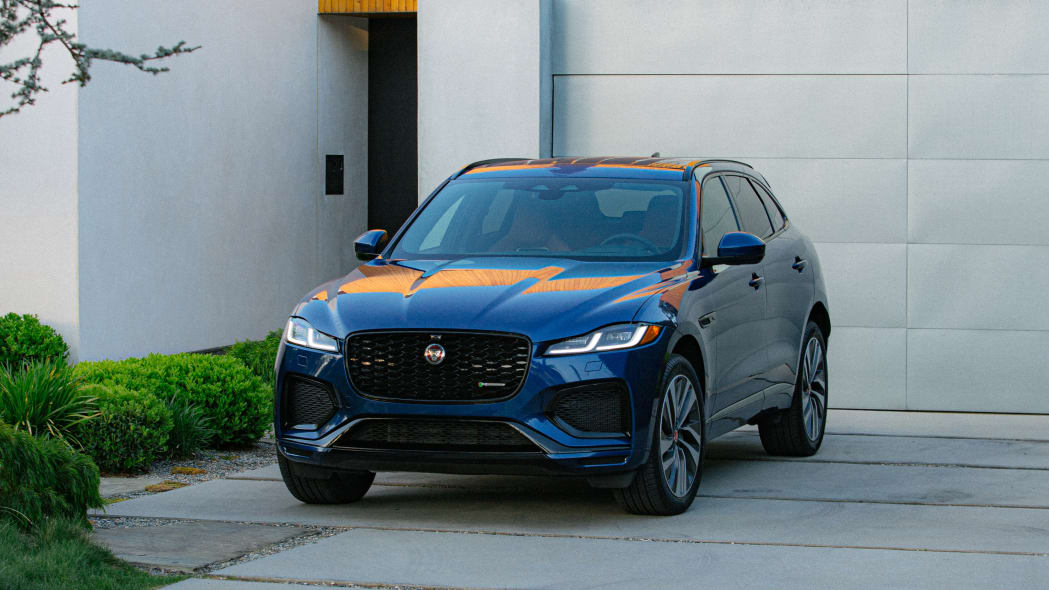 While the F-Pace received a handful of styling tweaks for 2021, the most noteworthy changes are inside. Just about everything in the cabin is new or updated, from the dash to the center console and even the steering wheel. The new design is more angular, with horizontal lines replacing some of the sweeping curves found in the 2020 edition. At the center of all this is JLR’s updated Pivi Pro infotainment system, which is much prettier, snappier and easier to use than the one it replaces. Speaking of replacements, Jaguar chucked the F-Pace’s rotary gear selector in favor of a more conventional shift knob – a welcome reversion, and one that is happening throughout the JLR portfolio.

Elsewhere, the interior looks clean, sharp and upscale, but we’d shop short of calling it characterful. Jaguar says its designers aim for British quirk, but despite some of the detail work, such as the upholstery-matching texture on the Pivi Pro control knobs, the hide-away drive mode selector, and the embossed “Leaper” on the headrests, there’s not much here that says “this is a Jaguar” the way the opulence of the GLC’s interior says “Mercedes-Benz” or the XC60’s spartan Swedish-ness oozes “Volvo.” We’d put it on par with BMW in terms of both design and material choices – nice, for sure, but not a knockout.

Jaguar put us in a P400 R-Dynamic S in “Bluefire” (just like the one featured in the gallery here) for our test loop, which covered approximately 40 miles in the northern Detroit suburbs. We set off with a good, old-fashioned printed route guide, which allowed us more freedom to play around with Pivi Pro than we would have gotten with programmed waypoints. 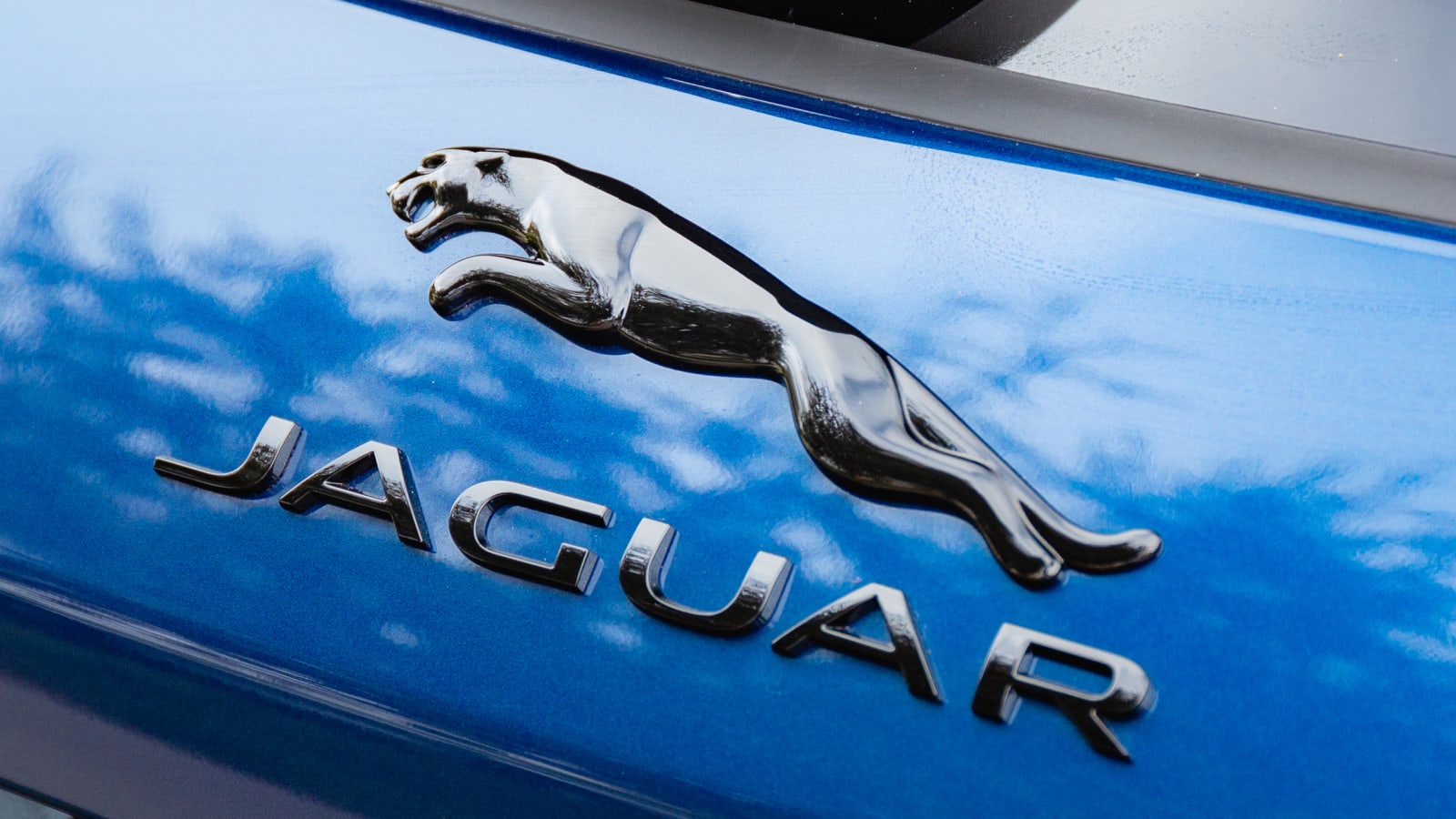 While it’s still not iPad-crisp in its responsiveness, the new system is leaps and bounds better than what JLR offered in its prior-generation cars. The menus are attractive and easy to navigate, and you’re not forced to dig deep into sub-menus to adjust commonly used features. We also like the flexibility of the navigation system’s map display, which will hold on to your zoom choices and map orientation when it’s allowed to go idle, unlike other systems that frequently revert to app defaults after a brief period of inactivity.

Pivi Pro still doesn’t offer wireless Android Auto or Apple CarPlay, but it’s compatible with both wired suites. Wireless device charging is also available, and the system is set up for over-the-air software updates via either cellular or Wi-Fi networks (the latter being the preferred method). 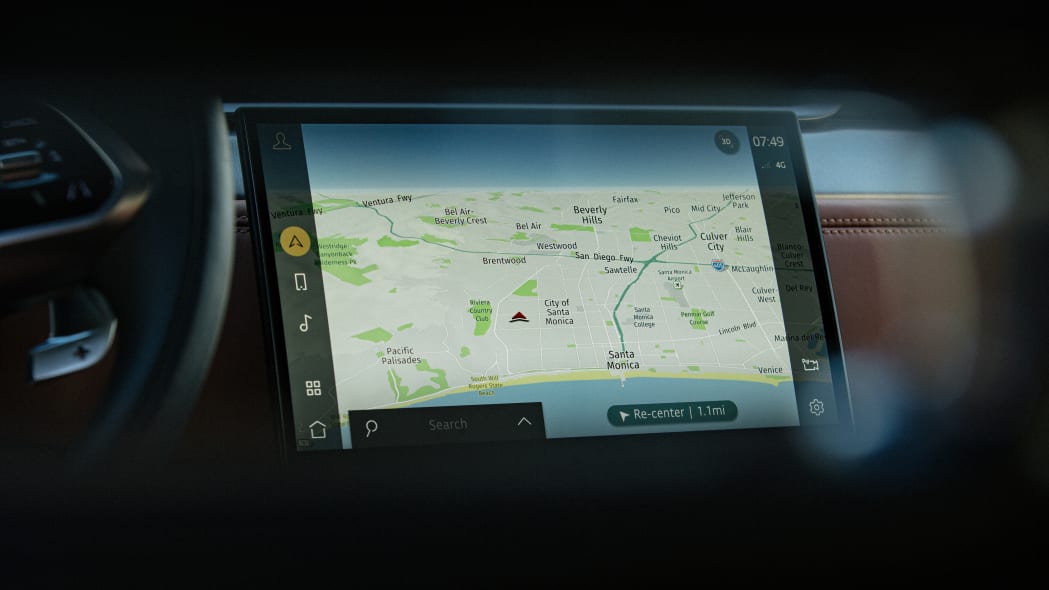 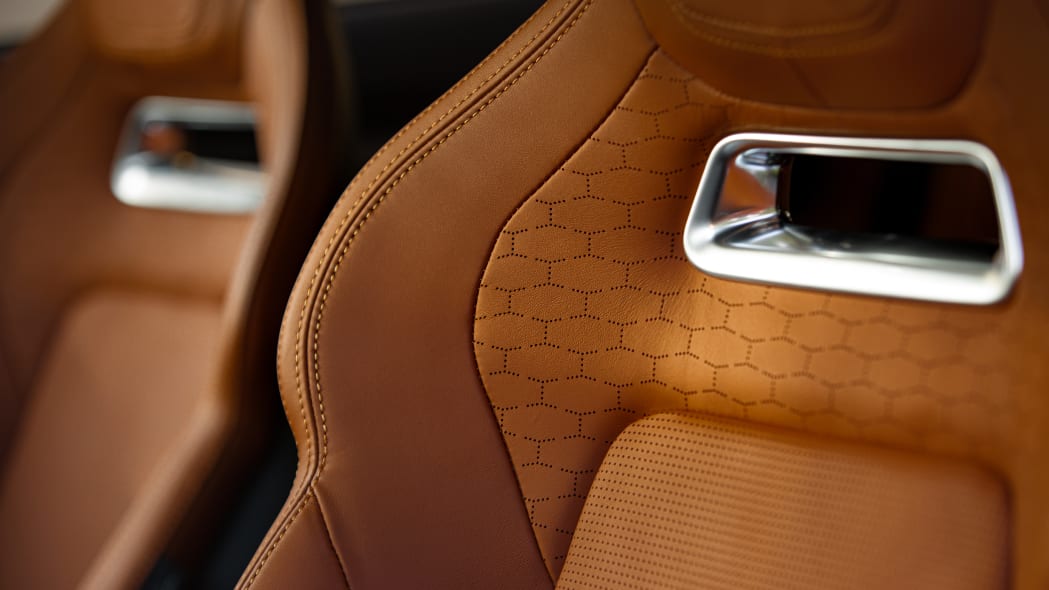 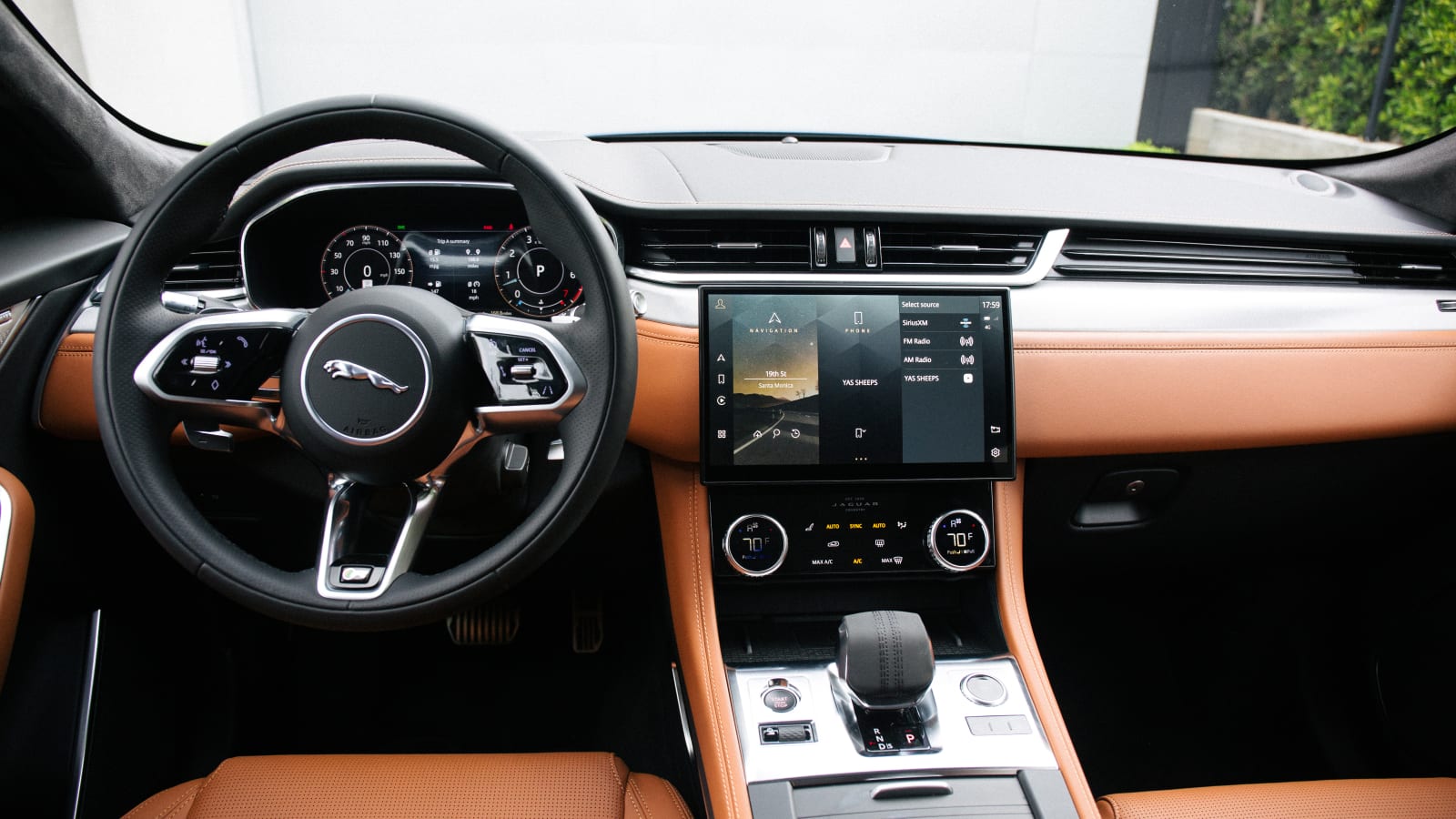 Jaguar’s new 3.0-liter inline-six is a winner too. Sure, 400 horsepower is 400 horsepower, but we came away impressed by the P400’s snappy acceleration and instant response. With the drive mode dialed over to “Dynamic,” it’s quite aggressive with the throttle even with mild inputs. Those who prefer their crossovers to behave like they were tuned at the ‘Ring will find this configuration quite pleasing. It’s a bit much for normal driving, but not unpleasant or unmanageable. Dialing it back to “Comfort” or “Eco” smooths out the R-Dynamic’s rougher edges.

At $82,245 as-tested (up from $66,350 without options), this P400 R-Dynamic is certainly on the pricy side, especially since it’s not the range-topping SVR. A BMW X3 M40i starts about $10,000 cheaper with similar performance credentials and prices out more favorably to boot, but we’d argue it lacks the visual pizzaz of Jaguar’s crossover. The Mercedes-AMG GLC43 splits the two at $60,950 before options, but can get Jaguar-pricey if you start aggressively checking boxes.

Like everybody else, Jaguar is betting big on crossovers and SUVs, and the streamlined F-Pace lineup will serve as one of the major anchors of that strategy. It’s a competent, comfortable luxury crossover offered in variants to appeal to just about any buyer. We say “just about” because there’s no plug-in hybrid yet (see: BMW X3 xDrive30e), but as Jaguar demonstrated by launching the I-Pace, electrification is certainly on the table. Jaguar’s 2021 updates are welcome (necessary, even, when it comes to tech) and should help keep it relevant until its inevitable redesign in a few years.