When the current Sonata was introduced, Hyundai designer Haksoo Ha promised that it would “… excite people who are looking for a sedan.” Apart from product planners, we don’t know many people who are genuinely excited by a mainstream midsize sedan, and perhaps that’s why decision was made to diverge from the mainstream with the 290-horsepower 2021 Hyundai Sonata N Line.

Yes, the “N” brand makes its way to Hyundai’s four-door for 2021. Hyundai started rolling out N in the United States with the Veloster. The N version of that offers a ton of punch, but it’s an enthusiast model, and that means there are corresponding compromises in comfort. That’s the point of N: performance first. But the Sonata N Line isn’t that. This is an N Line model after all, not a full-blown N. Like BMW M or Mercedes-Benz AMG, Hyundai’s “N” brand is meant to be the pinnacle of performance for the models that bear it. “N Line,” much like “M Sport,” means you’re only getting part of the way there.

That’s not to say that the 2021 Sonata N Line is incomplete. Far from it. At $34,305 (including $1,005 for destination), this is a reasonably priced package that does exactly what Hyundai promises, no more and no less. In fact, the N Line offers most of the range-topping Sonata Limited’s equipment despite coming in $600 cheaper. And like the Limited, the N Line has no available packages. There are a few smaller accessories and add-ons (including the $200 summer tires, though our tester had the standard all-seasons), but in broader terms, what you see is what you get. 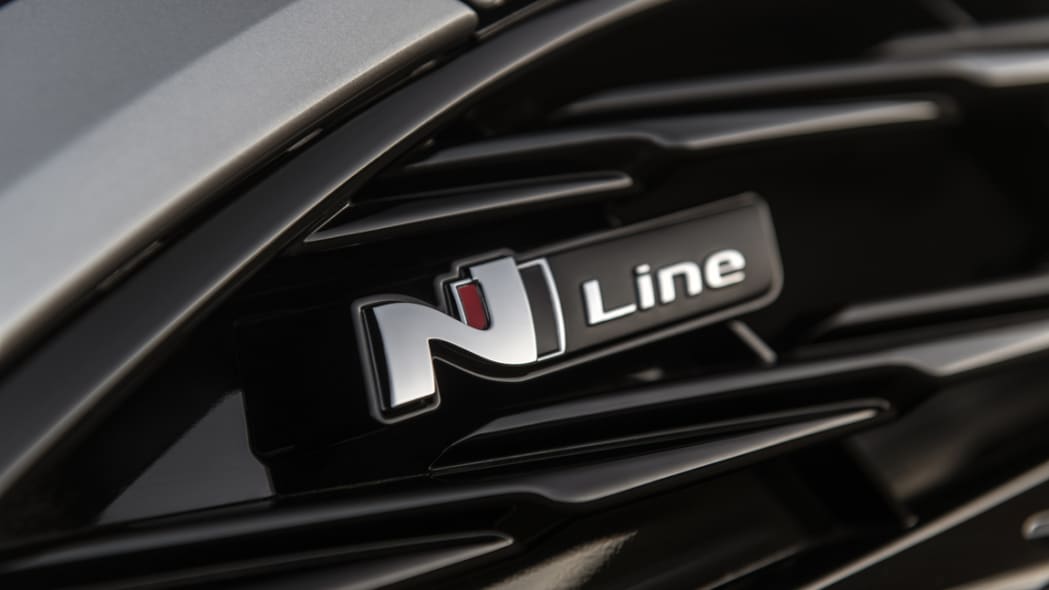 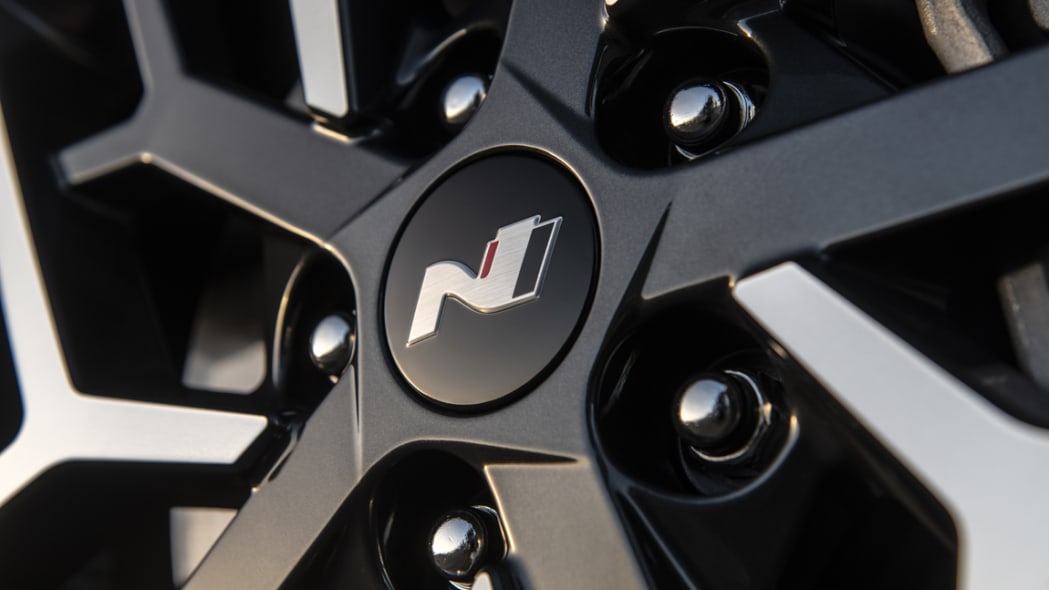 Notably, the N Line gets requisite badges in a few strategic locations plus unique seats with a little more bolstering finished in a combination of leather and faux suede. A few of the Limited’s luxury interior items are missing, such as ventilated front seats, a heated steering wheel and Hyundai’s surround-view camera, but the N Line makes up for that with a sport-tuned suspension, unique wheels, and, well, 110 additional horsepower.

This is our second time behind the wheel of the new Sonata N Line, but the first in a production-spec car. Our prior experience taught us that Hyundai had dialed the N Line in pretty darned well, but we were curious to see if there had been any improvements in ride quality since that stage of development. With that in mind, we took advantage of some unseasonably pleasant late-February weather to give the Sonata N Line a go on our favorite back roads. 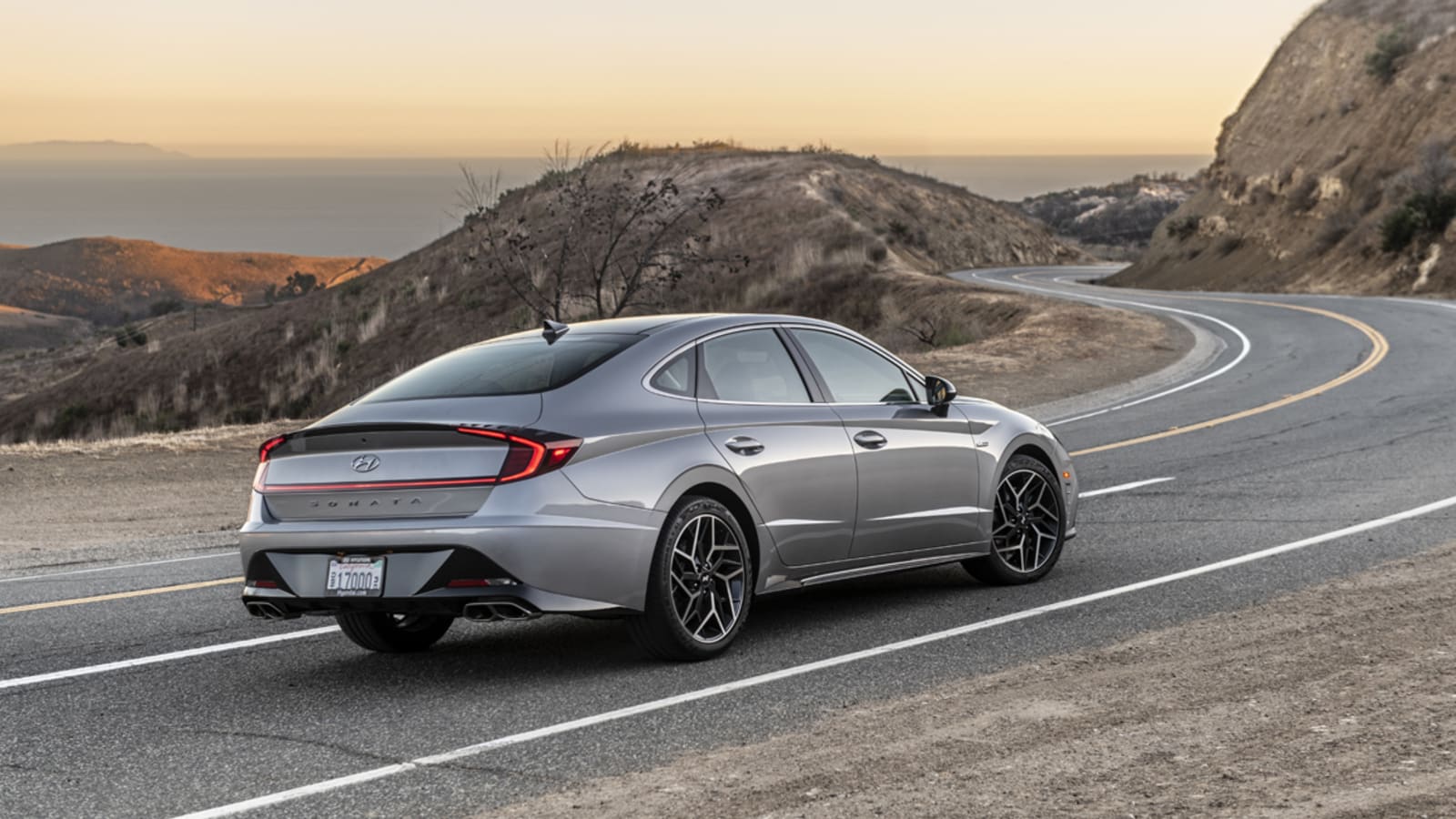 But first we had to get there. The trek from Detroit’s northern ‘burbs to the rural playground west of Ann Arbor is a little less than an hour almost exclusively on large, divided highways. Here, the N Line suspension seemed to do just fine. We did note that the Sport Plus programming locks out the N Line’s adaptive cruise control feature, but who needs rev-matching and whatnot when you’re cruising along at a steady 70 mph, right? The N Line’s in-gear passing power is phenomenal, thanks to all that torque.

From a dead stop, it’s a different story. Launch control is great and all, but in typical day-to-day driving, the N Line is the picture of a high-output, front-wheel drive family sedan. Mashing the gas hard off the line is a recipe for a one-tire fire, and once it hooks, you’re in for a bit of a ride. Yeah, it torque-steers. It’s not severe (Trust us; your author drove a 2008 Mazdaspeed3 for six years), but it makes itself known when you get frisky, especially at low speeds.

We were most concerned with how the N Line’s firmer suspension would handle back roads that look similar to the barren landscapes being photographed by NASA’s Perseverance rover, but as it turned out, our worries were misplaced. By sporty-car standards, the N Line handled the heaved and broken pavement like a champ, blasting smoothly over surfaces that would loosen teeth fillings in some sportier cars. 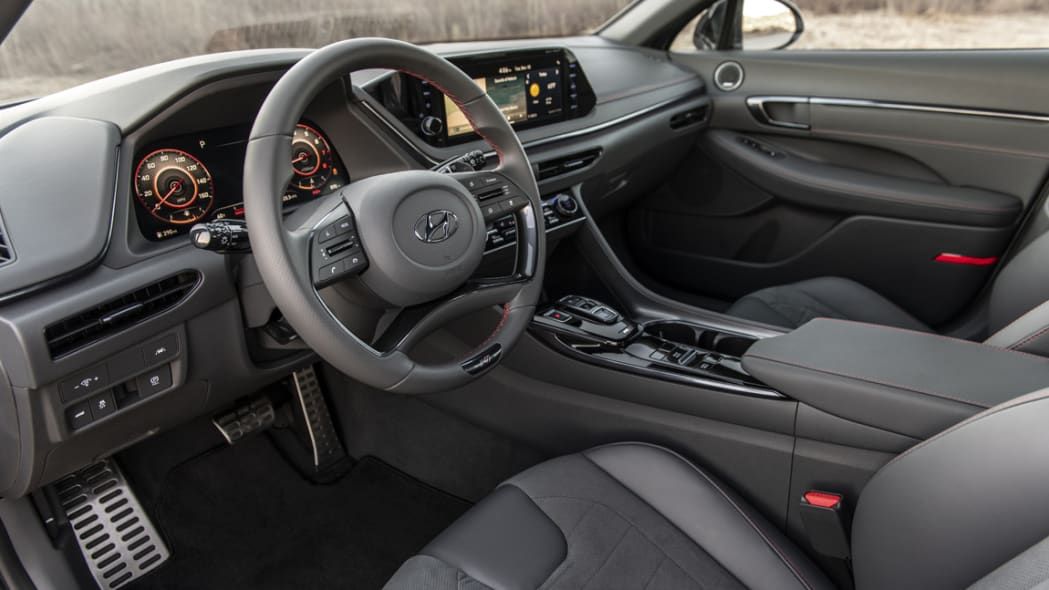 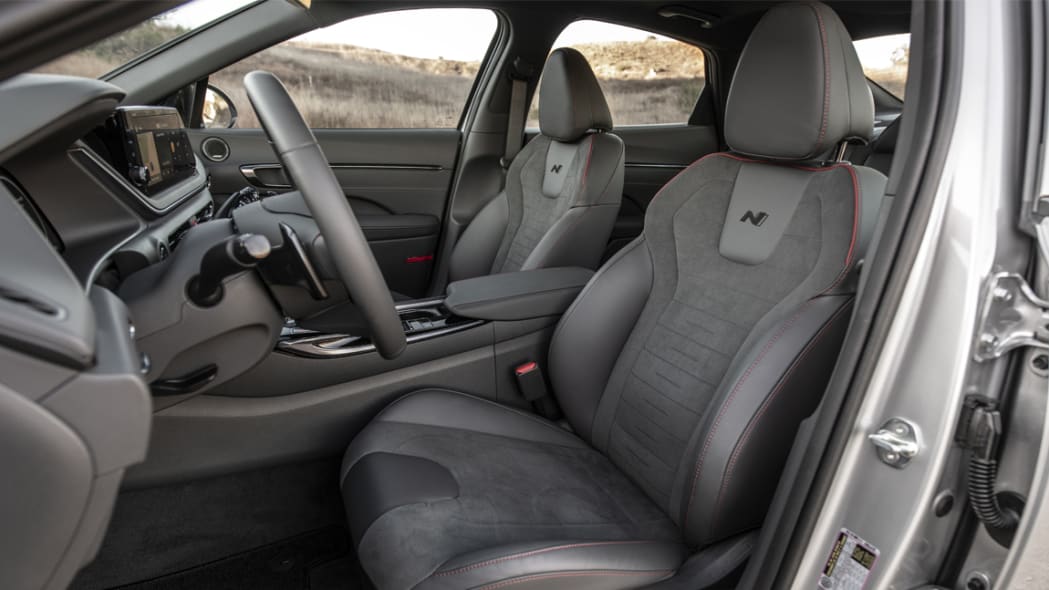 There’s a trade-off here, as you might suspect. The N Line’s reflexes are sharp, but not surgically so. It’s hard not to feel removed from what is happening between the steering wheel and pavement. Axle skitter from the inside wheel under hard acceleration was heard rather than felt. It feels big, too. While some bigger cars shrink around the driver when driven enthusiastically, you can’t really escape the sensation of the N Line’s scale. It doesn’t feel heavy, just expansive. This all contributes to a vague sensation of distance, as if whatever the car is doing is happening far away from you and (perhaps only incidentally to) your inputs.

As enthusiasts, we tend to be a bit inconsistent with our vernacular. We’re cool with front-wheel-drive “sport” compacts and 4×4 “sport” utility vehicles, but for some reason, when you stick “sport” next to “sedan,” everybody automatically assumes you’re talking about a rear- or all-wheel-drive luxury car with a big engine and aggressive suspension calibration. Even praise for the Mazda6 and Honda Accord — both of which have been offered in variants that are quite wonderful to drive — is often tempered with the caveat that there’s only so much one can do with front-wheel drive.

But even setting that aside, we’d hesitate to use the “s” word here. It’s sport-y, for certain, but that’s as far as we’re willing to go, and we’re pretty certain that’s exactly what Hyundai was gunning for. It’s quick and sharp enough to feel at home in on a twisty road but stops short of offering the edge we’d associate with a full-blown performance offering. This keeps it accessible and more broadly appealing, which are two things that matter more than we might like. If we want Hyundai to keep building sedans, people besides us to have buy them. The shopper looking specifically for a hardcore Sonata represents a niche of a niche; building for that person is a sketchy proposition. Just look at the Volkswagen Arteon.

But for the buyer who wants just a little more sizzle than what you get from the standard Sonata, or simply wants to check every available box, the N Line fits the bill beautifully. It’s satisfyingly quick, especially on the highway, and offers enough character to be interesting without becoming intrusive. It’s more than just a Sonata with another hundred horsepower, but not so much more that it’s an entirely different car. In today’s market, that seems like an excellent balance.