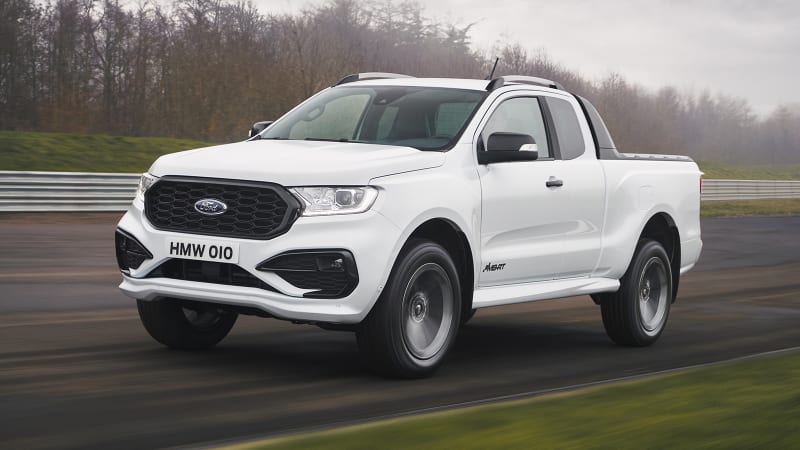 The U.S. is the pickup truck capital of the world, made clear by vehicles such as the Ram TRX, F-150 Raptor and Colorado ZR2. And because of that, it’s so strange that we keep missing out on the coolest versions of the Ford Ranger. First there was the Ranger Raptor that made it to nearly every Ranger market but here (though that may change with the next generation). Now there’s the Europe-only 2021 Ford Ranger MS-RT that adds a heaping helping of street-oriented sporty styling.

The Ranger MS-RT is designed by M-Sport, the company responsible for Ford’s rally cars. The company has previously created sporty looking versions of various Ford Transit models. It’s a handsome truck with unique front and rear bumpers, the former getting a bit of a lip spoiler. They’re bridged by a set of side skirts. New, bulging fenders add some width, and it’s all capped off with a unique grille, fairing over the bed and 20-inch OZ Racing wheels. The interior features leather upholstery, orange contrast stitching and special badging.

The one disappointing aspect of the MS-RT is that it doesn’t get any unique performance enhancements. It gets the same turbocharged 2.0-liter diesel four-cylinder as the Wildtrak, which makes 210 horsepower and 369 pound-feet of torque. It’s also paired with a 10-speed automatic transmission. The chassis and suspension are just like the Wildtrak, too.

Because of the lack of performance enhancements, the fact that the Ranger MS-RT won’t come to America doesn’t sting as much as the Raptor. But it’s still a darn good looking truck, and the sporty design seems like it would be a great pairing with the punchier 270-horsepower turbocharged 2.3-liter gas four-cylinder we get here. Lower the suspension, give it some stickier street tires and call it the Ranger ST. It would only get better with things like the Ford Performance ECU calibration that will get you to 315 horsepower and 370 pound-feet of torque. But as great as it sounds, don’t count on it ever becoming reality. Instead, we’ll just have to dream of what could be.