DETROIT — The 2021 Ford Mustang Mach-E is a lot to unpack. It’s a crossover. It runs on electricity and wears the Mustang name, specifically the legendary Mach badge. Some of this might feel contradictory, but in a few short years, it will not be a novelty. Electrification is the industry’s biggest change since propulsion went from four legs to four wheels. When an electric Mustang shows up in your driveway, reality crystalizes.

With LED projector lights and an illuminated pony logo, the Grabber Blue First Edition Mach-E pierces the winter gloom nosed in toward my house. It certainly looks the part of a Mustang from the front. I get over any qualms about the crossover body style pretty quickly. The Mach-E is handsome, regardless of the silhouette. Look at it logically. You’re Ford. This is the most important car you’ve made in years and your first real electric car. You want to sell it to a wide audience and beat Tesla. The Mustang name helps you do that. You play the best cards you have and go for the win, rather than dwell on the past.

Considering progress and change, I chart a path to Ford’s historic Piquette Avenue Plant near downtown Detroit. This 117-year-old brick structure gave birth to the Model T before the car’s burgeoning success forced Henry Ford to move production to the much larger factory in nearby Highland Park that churned out millions of Tin Lizzies. If Ford had stayed at Piquette, the Model T would probably be a museum piece and Henry a footnote to history. His friend, Thomas Edison, might say a dedicated, all-electric Ford is overdue (the short-lived Focus electric notwithstanding).

After a few photos, I’m on my way. The Piquette is an appropriate setting to ponder Ford’s evolution, but honestly, it’s just a nice drive for me, mixing the freeway with urban and suburban roads. I meander through Detroit’s New Center, past General Motors’ former headquarters (now state offices) and get back onto a stretch of Interstate 75 named for Walter P. Chrysler. Before my test drive turns into a 1920s Big Three seance, I mash the throttle and hit 70+ mph briskly in the Mach-E First Edition, which is every bit as quick as advertised.

Jolted to the present, I’m enjoying the “Unbridled” energy of this Mustang with its engaging steering, fast throttle response and the piped-in engine noise Ford creates to make the Mach-E sound more like a traditional engine. Unbridled is not a bad pun, it’s one of three drive modes that tune the acceleration, steering, ambient lighting and digital displays. Engage and Whisper are more sedate and encourage energy-efficient driving. They’re cued up via the 15.5-inch infotainment screen. Sync has never been a favorite of mine, but this latest, special-to-the-Mach-E 4A version is clever. Everything is easy to figure out and navigate. It’s even more impressive considering there’s only one analog knob and the touchscreen functions simply work. Whether I’m trying to change the throttle response or change the radio station, it’s all accomplished quickly. I paired my phone while barely looking at the screen.

The interior is otherwise basic to the point of minimalism, which is logical. There’s a 10.2-inch digital screen in front of the driver in place of a traditional gauge cluster, and the center console features large cupholders and a good-size storage area. This Mach-E First Edition has a black interior with blue stitching and a gray accent piece stretching horizontally across the dash. My only complaint is the fabric material on top of the dash, which felt a little out of place. The cabin reminds me of the Audi E-Tron for its simplicity and forward-looking vibe. From the materials to the infotainment, Ford executed on every front, and there’s a decent amount of room in the backseat, even with the sharp roofline. That said, the huge gauges and tall shifter found in traditional Mustangs that create such a sense of history are gone. The interior — more than just the crossover body style — is where I felt an emotional detachment from the Mustang lineage.

This First Edition Mach-E draws power from its standard 88-kilowatt-hour “Extended Range” battery pack paired with a single-gear transmission and motors at each axle to create all-wheel drive. The combination produces 346 hp and 428 lb-ft of torque and offers a range of up to 270 miles. This test car stickers for $59,400, which, given the electric technology and impressive design, feels reasonable. Sixty miles per hour comes on in 4.8 seconds, and after blasting onto the Chrysler freeway with all of the instant torque, I feel like that figure is reasonable. The Mach-E is an enjoyable car to drive, as exciting as any Mustang I’ve driven. Obviously, in its own way, but still visceral and engaging.

The suspension is sporty enough for a small crossover, and it’s the first time I’ve sought out a snowy dirt road in a Mustang. The brakes have a bit of travel and then a good deal of bite, which takes some getting used to. Selecting one-pedal mode, I was able to ease off the throttle and coast the Mustang down to a near stop on Woodward Avenue, which is a little surreal.

My first and longest drive in the Mach-E took nearly two hours, stretching 64.6 miles. I used 65% of my energy on the route, but the cold weather clearly played a role. I used 21% on climate control and another 10% of the battery was sapped due to the exterior temperature, which rose from 12 degrees to 23 degrees Fahrenheit during my afternoon run. I burned another 4% on accessories. 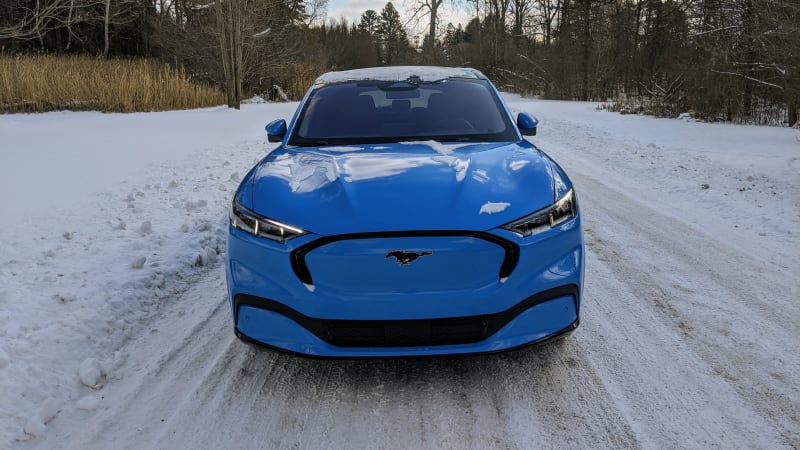 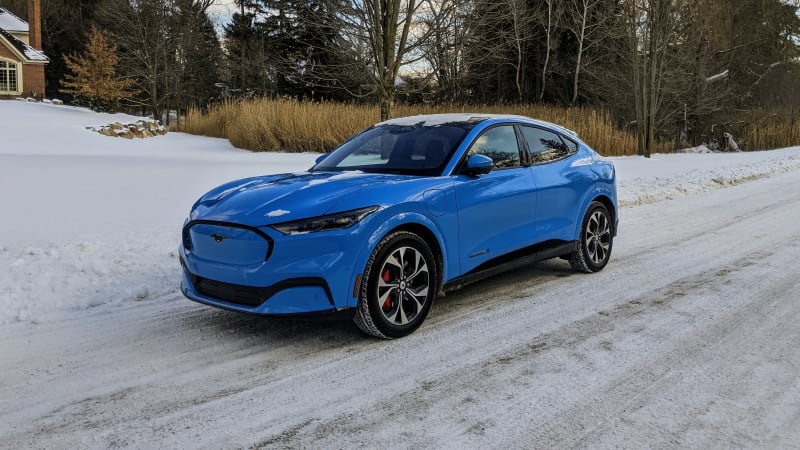 Clad in a heavier sweatshirt, I set out for a sunset drive and was able to use less energy on climate (12%), but my accessory consumption (8%) went up and the frigid evening depleted 17% of the energy, leaving 64% for actual driving. Note that I know all these percentages because the car actually provides them in a readout in the infotainment system.

I kept my Mach-E reasonably charged using the Ford Mobile Charger, which is standard equipment. Plugged into a standard 120-volt outlet in my garage, I was able to add 9 miles of range after 3 hours and 46 minutes of charging, which is in the ballpark of the charger’s average estimate of 3 miles per hour. That’s all the more impressive given the chilly temperatures. During another four-hour session I was only able to get another four miles of range. While disappointing, that performance is inline with EV charging in cold weather outdoors, and Electrify America notes it’s common for charging to be less than half of the top output.

Juicing up the Mach-E gave me insight into life as an EV owner. I would definitely upgrade my outlets. I would probably invest in a Ford Connected Charge Station ($799), which can add 28 miles of range per hour, for the convenience of it, though the March stop-sale order for the station gives me pause. That said, using the mobile charger on a 240-volt outlet adds 20 miles of range per hour on average. If you can charge your car at work, the mobile charger with the stronger outlet might be all you need. On the flipside, the portable charger fits neatly under the floor of the hatch and it’s nice to have with you, just in case. In Michigan, Consumers Energy customers can get a $500 rebate for installing a Level 2 charger, so that might tip me over into the upgrade for a Mach-E or other EV.

I never thought test driving a Mustang would compel me to check my utility bill, but the Mach-E is more than a Mustang, which is a heady thought. It’s Ford’s invitation to experience life as the owner of an electric vehicle. Using the Mustang name makes it that much more attractive to a wider group of consumers, but make no mistake, the Mach-E presages a future where electric cars won’t be niche or even just performance. They’ll simply be reality.

Carroll Shelby, who knew a thing or two about performance, always said his favorite Mustang is “the next one.” The very history of this car is about looking forward. This one just happens to be electric.