Dakar Yellow! Mint Green! Behold the glory that is the BMW Individual Visualizer

The 2021 Ford F-150 is as reworked as you can get without going completely back to the drawing board. The fully boxed frame is carried over, and the engine lineup seems awfully familiar. It also doesn’t look all that different despite some aerodynamic tweaks and the choice of 11(!) new grilles specific to various models. Ah, but dig deeper and you’ll find that Ford went through its best-seller with a fine-toothed comb, making small but impactful updates nearly everywhere that together add up to a substantially improved truck.

Take the ride, handling and steering response, for instance. There’s nothing fundamentally different than before, but engineers widened the track and tread width, the ride height was lowered 0.4 inches, the engine and transmission mounts were enhanced, the front suspension got a more beneficially located stabilizer bar, the rear suspension got monotube shocks and new leaf springs, the electric power steering system was retuned … we could go on. The result: The new F-150 is surprisingly much better to drive.

Inside, the basic cab dimensions and seating architecture are the same, but surgery was performed on the dash so it can accommodate a massive 12-inch touchscreen. Materials quality was also enhanced, especially on the high-lux trim levels, and the center console reworked to include an innovative armrest that folds out to provide a long, flat work station. The new Max Recline front seats are for when you’re definitely not working.

Under the hood, the engine choices are mostly carried over, but the 3.5-liter EcoBoost V6 gets an upgrade and the new PowerBoost hybrid wows by boasting the best power, torque and fuel economy in the F-150 lineup. That’s without question the biggest single enhancement for 2021, but it’s the multitude of smaller ones that ultimately make the most profound difference.

The F-150 was given a substantial overhaul for 2021 that addressed virtually every aspect of the best-selling truck.

Ford had to perform some surgery on the F-150’s dash in order to swallow what is essentially a small television in top trim levels. The result is an awfully monolithic center stack that’s less visually appealing than what you’d get in the Ram 1500. At least it doesn’t look cheap and blobby like the Chevy Silverado and GMC Sierra. That’s especially true when talking about the ritzy upper trim levels, as our Platinum test trucks featured buttery leather, open-pore wood trim and nicely textured metal-look trim. It can be a seriously luxurious cabin, even if that center stack is a tad ungainly.

As for that big 12-inch screen, we can’t say it adds much to the Sync 4 interface beyond simply being bigger than the 8-inch standard unit. That’s certainly still a benefit, but unlike the giant screens found in the Ram 1500, Ford’s own Mustang Mach-E or various models with widescreen units, the larger screen doesn’t maximize its extra acreage with rearranged or extra-large icons that improve functionality. It’s also a further reach than what you’ll find in the Ram, regardless of screen size. On the other hand, the available all-digital instrument panel is colorful and crisp, and there’s no faulting the ample infotainment feature content.

We extensively reviewed the six-passenger cabin of a 2020 F-250 SuperCrew whose seating is essentially shared with the ’21 F-150, including its front middle seat and fold-down console. Five-passenger F-150s, meanwhile, offer a new center console with a unique armrest lid that unfolds forward to become a flat surface to place a laptop, paperwork or road-side picnic. To make this origami possible, the shifter uniquely motors forward into a recess, though only when parked. We’ll be curious to see how much owners utilize and appreciate this functionality. Ford also increased the steering wheel’s tilt and telescoping travel, making for a more comfortable, less-truckish driving position. 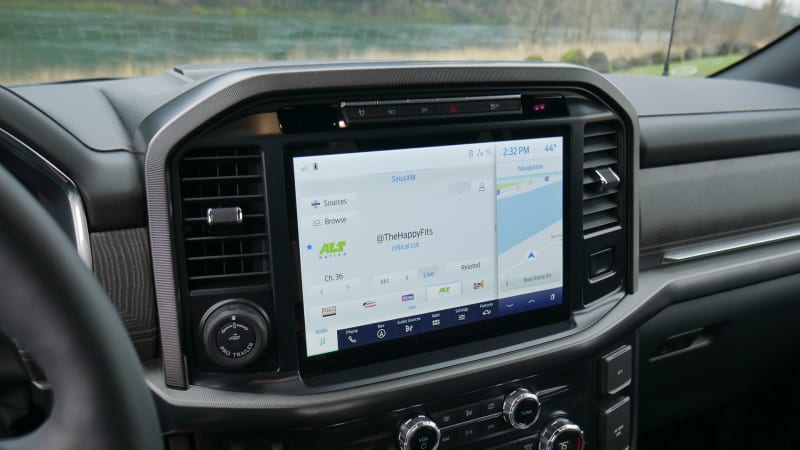 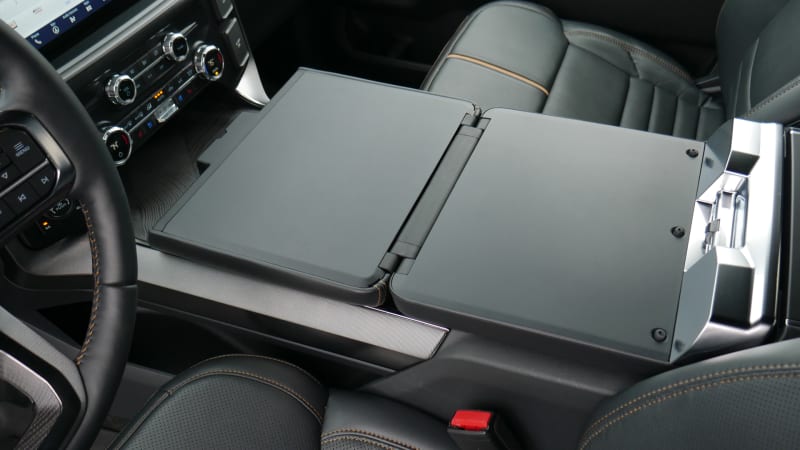 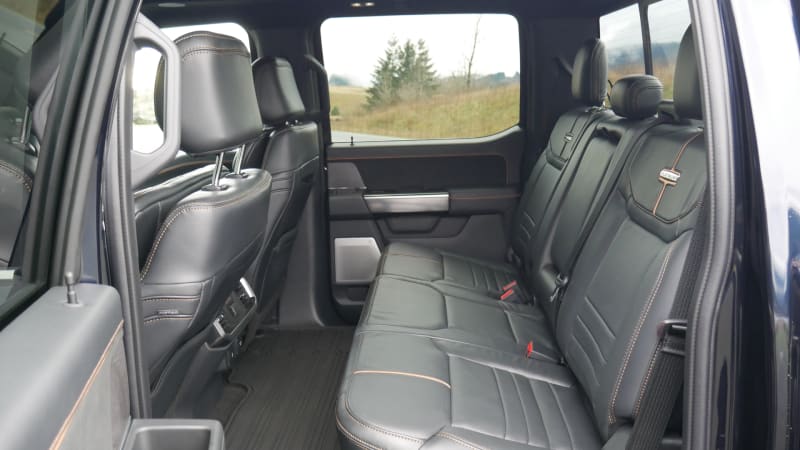 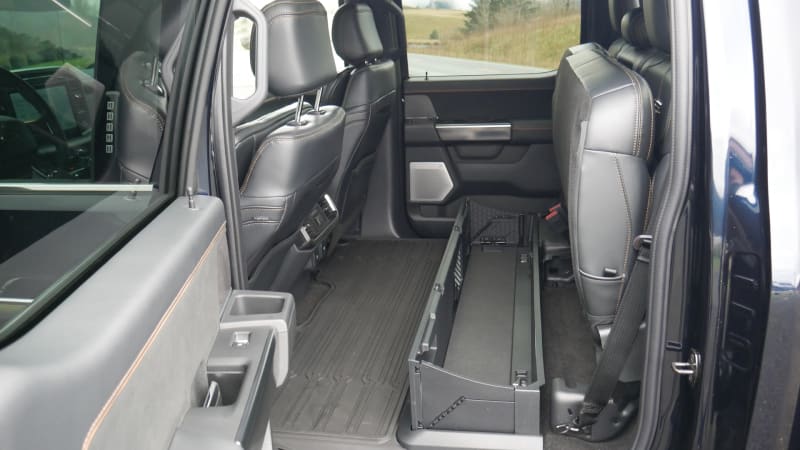 The various full-size trucks are so big that differences among them are effectively moot. An inch or two here and there won’t make a difference outside. As before, you get a choice of regular, SuperCab (extended) and SuperCrew cabs with the latter two offering six-passenger or five-passenger seating arrangements. The SuperCab continues to have clamshell doors rather than the front-hinged ones offered by Ram and GM. Its back seat space continues to be on the cramped side, but that’s common for the segment. So too is the vast amount of rear seat space in the SuperCrew.

This is also as good a place as any to mention the F-150’s unique bed elements. One is familiar: the tailgate’s pop-out assist step that makes repeatedly climbing up and down out of the bed a ridiculously quick-and-easy process. The second is new: Power outlets (7.2 kilowatts with the hybrid, 2.4 kW with other engines) that allow the F-150 to function as mobile generator and power station. There are up to four bed-mounted 120-volt 20-amp outlets, with a 240-volt 30-amp outlet on the hybrid’s 7.2-kilowatt version.

Should you be plugging in a saw, there’s also a ruler built into the tailgate to make measuring twice and cutting once just a bit quicker. 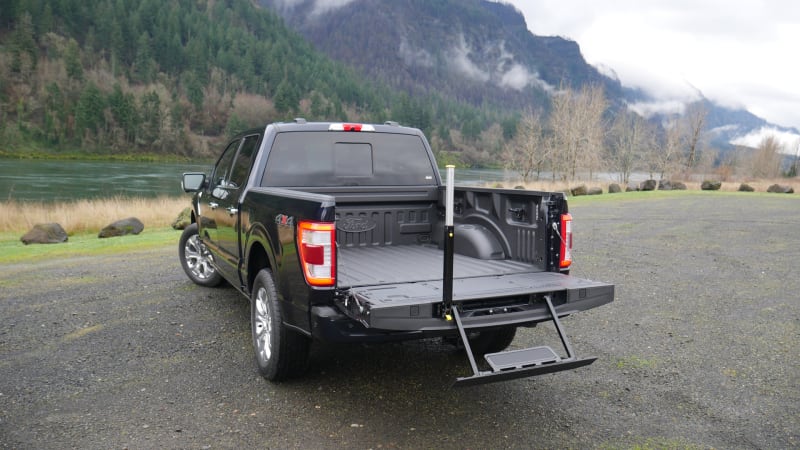 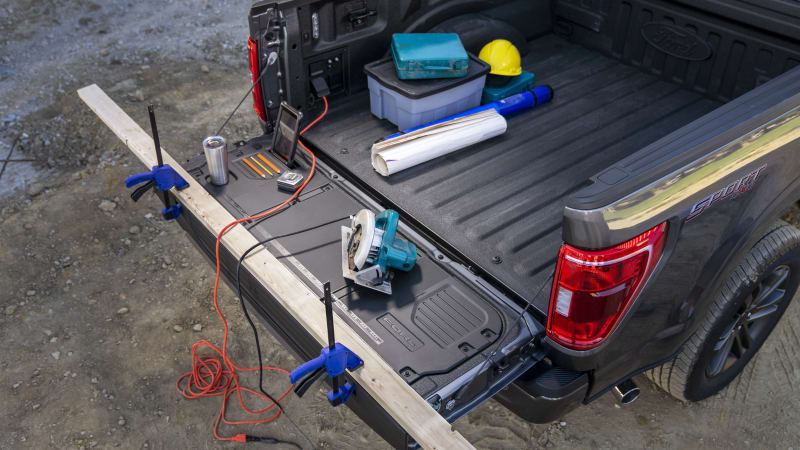 The 2021 F-150 is available with the same number of engine options as before, but the range-topping choice is different. The High-Output 3.5-liter V6 found in the Limited and Raptor is gone (the Raptor itself is on hiatus for ’21), while the new PowerBoost hybrid debuts as the most powerful choice.

Every F-150 has a 10-speed automatic and comes standard with rear-wheel drive. The basic four-wheel-drive system has an open diff at the rear, while the upgrade one has an electronic locking rear diff.

The lineup starts with a 3.3-liter naturally aspirated V6 good for 290 horsepower and 265 pound-feet of torque. Fuel economy is a combined 21 miles per gallon with 4×2, and 20 mpg combined with 4×4.

Next up is the first of two “EcoBoost” engines, which is just fancy Ford talk for “turbocharged.” The 2.7-liter twin-turbo V6 produces 325 hp and 400 lb-ft of torque, while returning 22 mpg combined with 4×2 and 21 mpg with 4×4. Don’t be surprise if your real-world fuel economy is much lower than that, however. 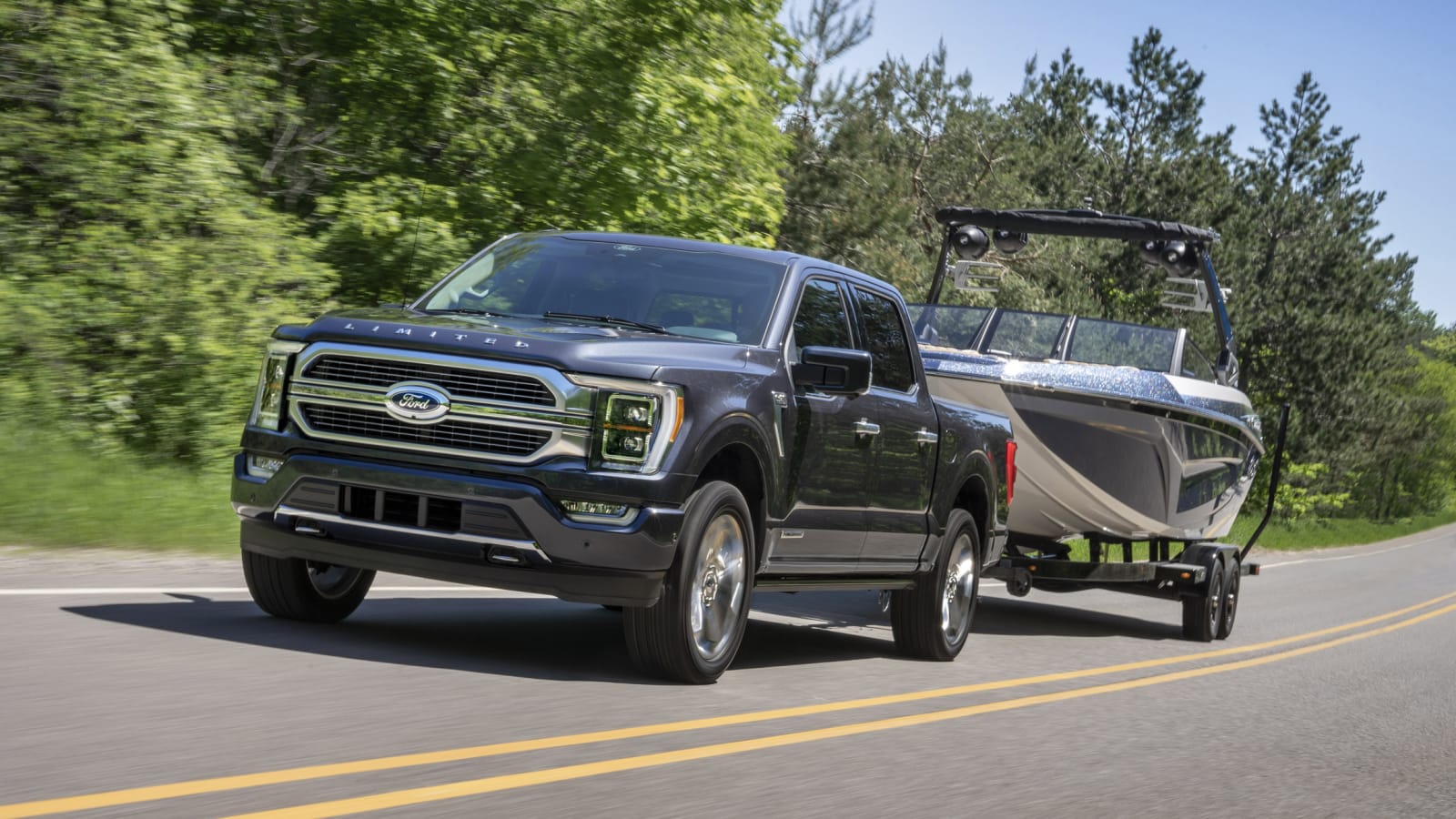 We’d still choose the silky-smooth 3.5-liter EcoBoost V6, though, which pumps out 400 hp and 500 lb-ft of torque. That doesn’t quite match the old High Output EcoBoost, but it still pumps things up by a significant 25 hp and 30 lb-ft. Fuel economy is 20 mpg combined regardless of drivetrain.

Finally, there’s the range-topping new PowerBoost hybrid powertrain. Its combination of 3.5-liter twin-turbo V6 and electric motor integrated into the transmission produces 430 hp and 570 lb-ft. It returns 25 mpg with 4×2 and 24 mpg with 4×4.

None of these differences may seem great, but when talking trucks, small differences in MPG figures can actually equate into big savings. In general, though, every version of the 2021 F-150 is impressively efficient for a full-size truck. 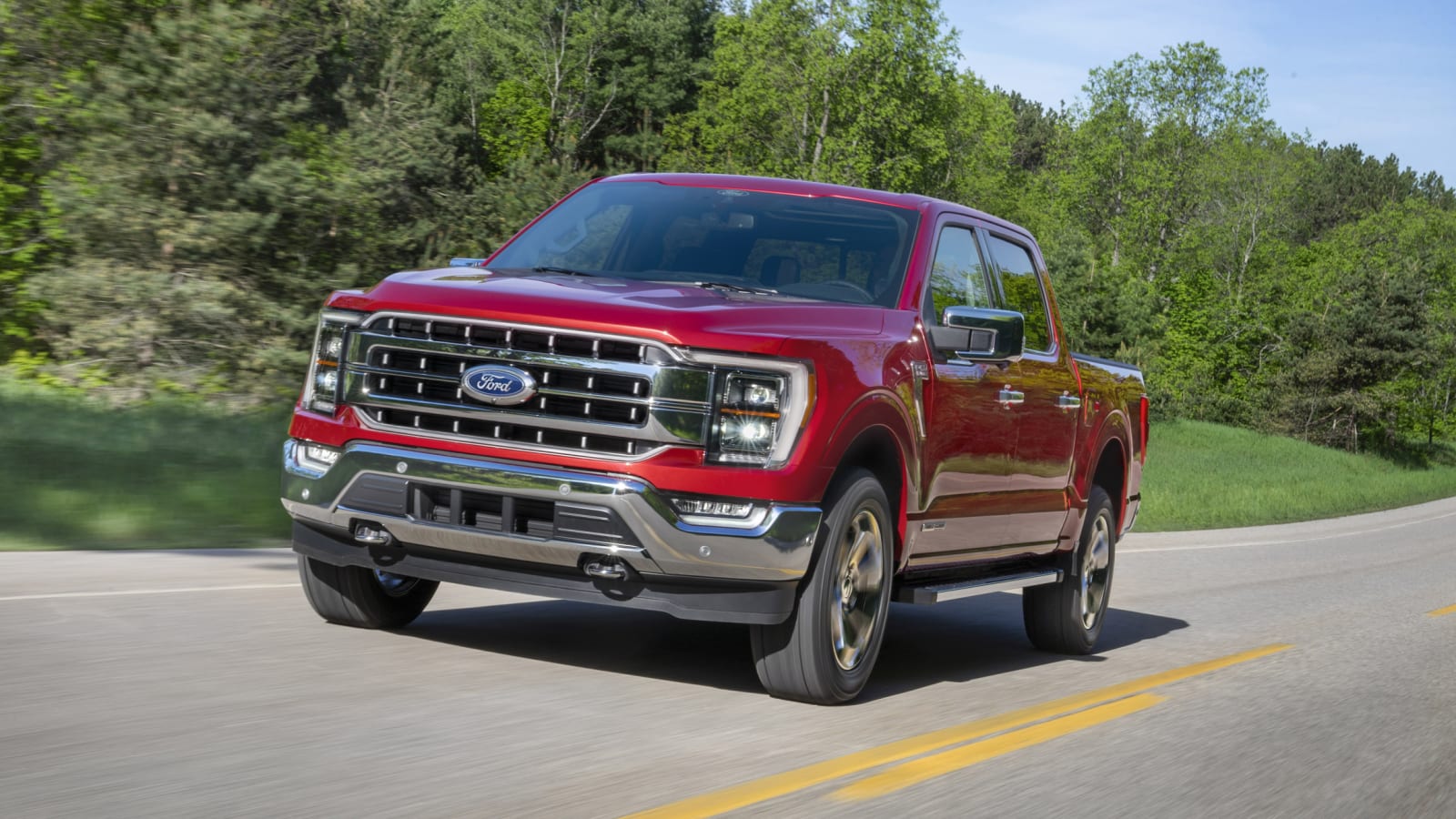 There are so many versions of the F-150, especially in regard to engine choice, that how it drives very much depends. A Platinum test truck and its adaptive steering system was almost SUV-like in the way it moved down the road: the steering was quicker and more responsive than before, the ride smoother, and there was the general feeling of the truck being smaller than it was. Even without the Platinum model’s adaptive steering, the new F-150’s helm feels precise and dialed-in. For those who need a pickup that can also accommodate the whole family on a road trip, the F-150 is no longer the compromise it once was. The Ram 1500 pulls off a similar trick, and indeed, the gap between the two trucks has narrowed substantially – and has possibly disappeared.

As for those powertrains, we won’t mince words: The F-150 PowerBoost is the most impressive pickup for everyday duty we’ve tested. Its massive output, refined power delivery and superior fuel economy make it the most appealing powertrain option. It also hides its hybridness well – there’s no fussy CVT, awkward brake feel or weird electric noises. It feels totally normal. It also makes the otherwise potent 5.0-liter V8 feel like an old dog, especially in its responsiveness around town. The two EcoBoost turbocharged V6’s are better in this regard, and continue to impress with their buttery smooth power delivery. The bigger 3.5-liter’s substantial gains for 2021 are also appreciated, especially in light of how relatively fuel efficient it remains.

We drive as many variations of the new F-150 as we can, but come away most impressed by the PowerBoost hybrid.

Go a little deeper with the changes made for 2021 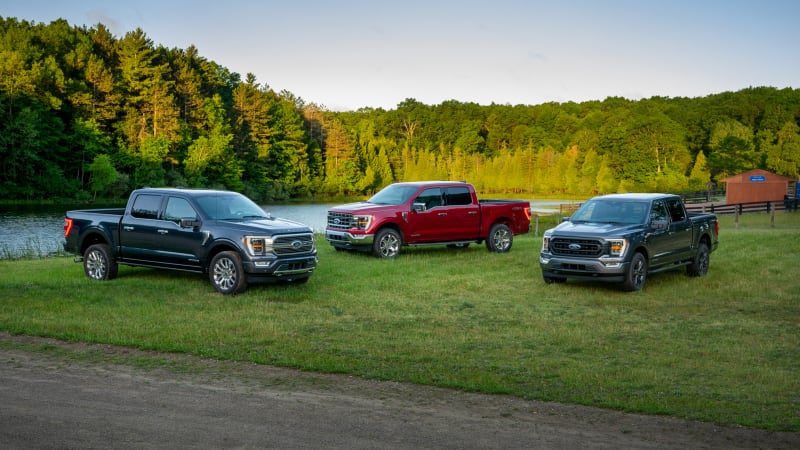 Pricing starts at $30,635, including the $1,695 destination charge. Of course, that’s for a base XL trim level with a regular cab, 6.5-foot bed, rear-wheel drive and the base V6. There are of course innumerable combinations thereafter, including the SuperCab (extended) and SuperCrew cabs, bed length choices, multiple 4×4 systems and all the engine options mentioned above. There are also the trim level choices: XL, XLT, Lariat, King Ranch, Platinum and Limited. The Raptor is on hiatus.

Rather than listing all the standard and optional equipment, we’re going to save some internet ink (and our poor typing fingers), and instead direct you to the far more useful breakdown of features, specs and local pricing for each 2021 F-150 variant here on Autoblog.

The base XL may not come standard with any driver assist systems, but in general, they are more widely available on the F-150 than on GM or Ram’s trucks. Starting with the XLT, the F-150 comes standard with forward collision warning, automatic emergency braking, lane keeping assist, blind-spot and rear cross-traffic warning and rear parking sensors. It’s also eligible for the Co-Pilot360 Assist system that adds adaptive cruise control with stop-and-go capability, lane-centering steering assist, evasive steering system and speed-sign recognition. The standard rearview camera also includes Dynamic Hitch Assist, which provides a sight line to help you hitch up without a spotter (or punching a hole in the bumper).