Ford says it could face $1.3 billion in new penalties in Transit Connect imports

Remember the Maverick? Probably not, but it’s the right name for Ford’s small truck

Ford Maverick name confirmed, and its reveal is just days away

It happened on the trail, in parking lots, and at home in my own driveway. “Is this the new Bronco?” they’d ask while pointing at the word ‘BRONCO’ spelled out in big block letters across the front grille. “I thought it’d be bigger.” My confused inquisitors were correct, the new Bronco IS bigger. What they were looking at was actually the 2021 Ford Bronco Sport, and specifically, the off-roadiest version available, the Badlands.

As I would explain, unlike the body-on-frame Bronco with removable top and doors that’s comparable to a Jeep Wrangler and Toyota 4Runner (and that I did a speculative suspension deep dive for months ago), the Bronco Sport is a compact crossover that’s a tougher offshoot of the Ford Escape. It uses a unibody design with a transverse engine driving the front wheels. But the Bronco Sport differs from the Escape in that it comes standard with all-wheel drive, rolls on a slightly shorter wheelbase, has significantly stubbier front and rear overhangs and has more ground clearance.

And that makes the Bronco Sport interesting in its own right. What’s wrong with a compact crossover with a bit of Bronco styling and attitude? When I got home from my trail run I pulled the wheels off for a look underneath. Pardon the mud I missed at the quarter car wash. 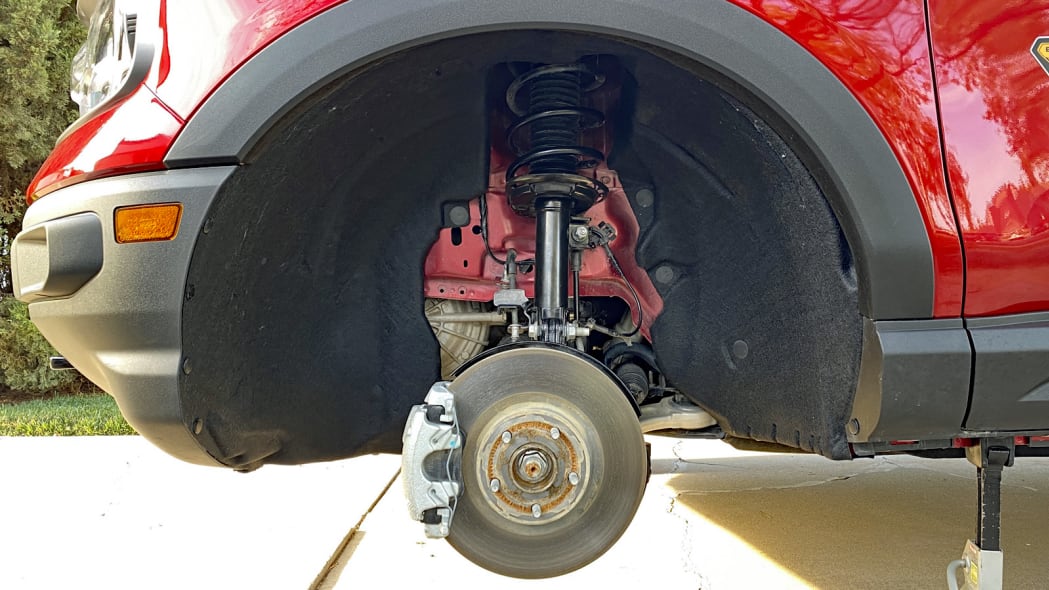 Because it is a compact crossover, it should be no surprise that the Bronco Sport rides on strut front suspension. But the spring rates, damper calibration and other suspension components are optimized to suit its more rugged personality. 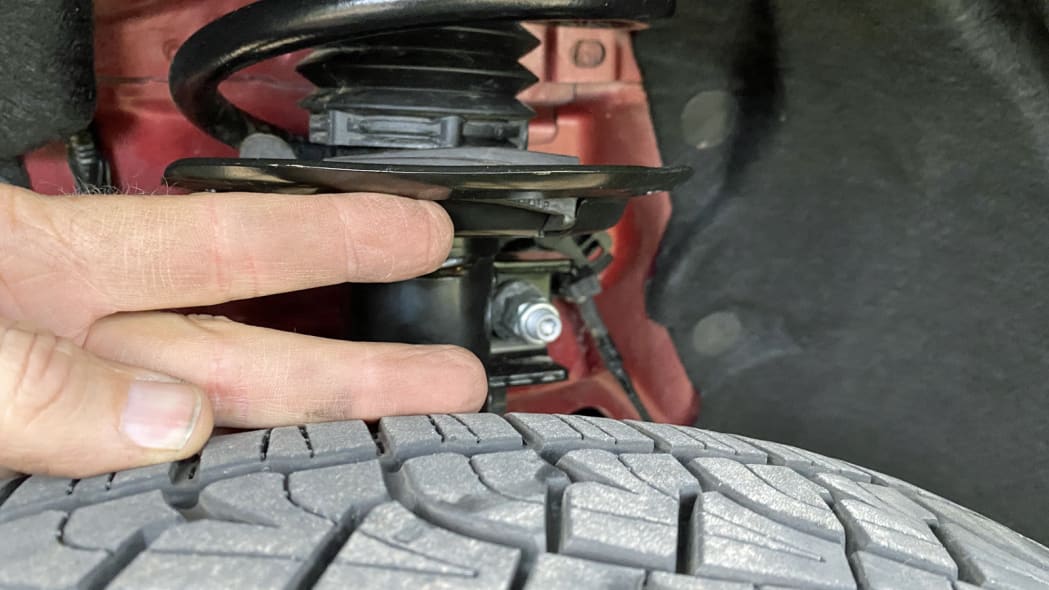 Before I get too far, I thought I’d back up and show you something I noticed as I was taking the front tire off. The Badlands comes standard with 225/65R17 rubber, which amounts to 28.5 inches in outside diameter.

The ability to fit larger off-road tires on strut suspensions is often hampered by tight clearance between the tire and the strut’s spring perch. But here there’s plenty of room, both above and behind the tire. I can’t speak for any other clearance issues that may prevent the fitment of larger tires, but strut interference doesn’t appear to be an issue. 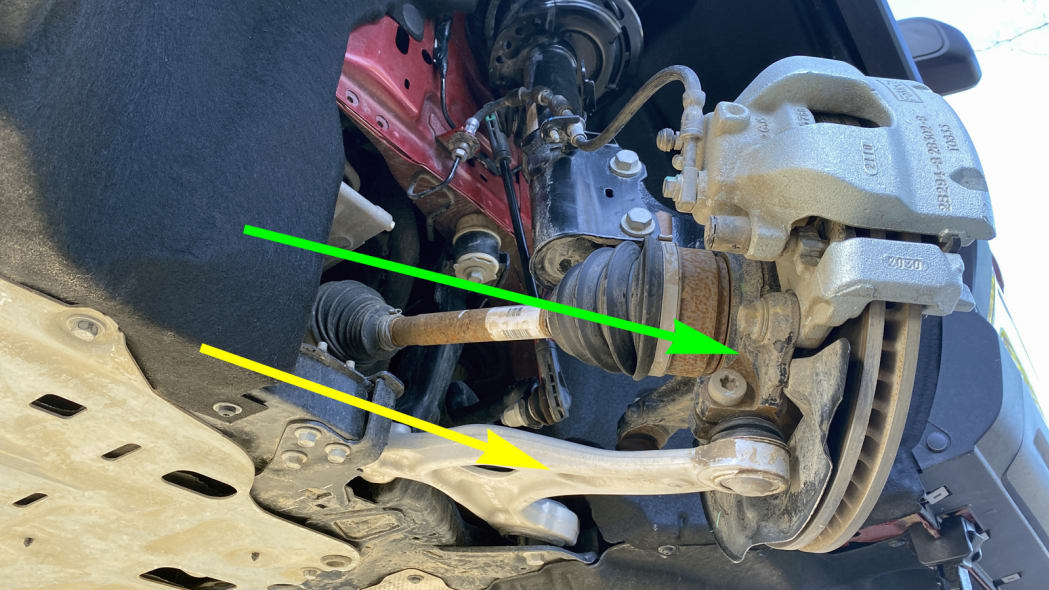 From here we can see that the lower control arm (yellow arrow) is made of aluminum. The steering knuckle (green) is made of steel. 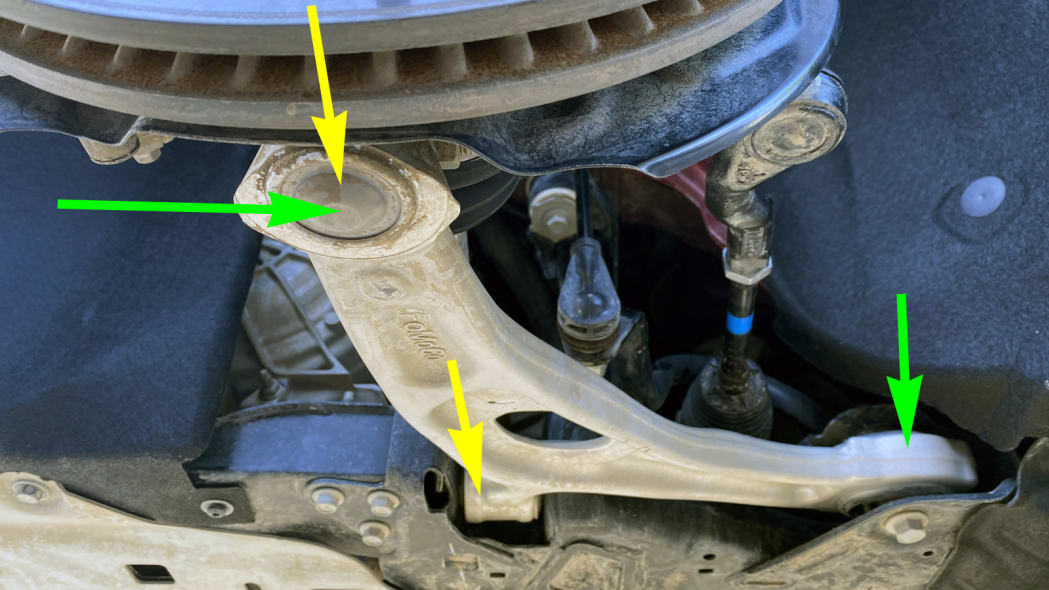 The lower control arm employs a reverse L shape which, among other things, makes it easier to produce a vehicle with a shorter front overhang. Here the forward bushing (yellow) is lined up close to the axis of the ball joint, which means it’ll be the primary load path for side forces when cornering. The rear bushing (green) is larger and oriented horizontally, which makes it well-suited for absorbing longitudinal impacts applied at the wheel as inward pulses. 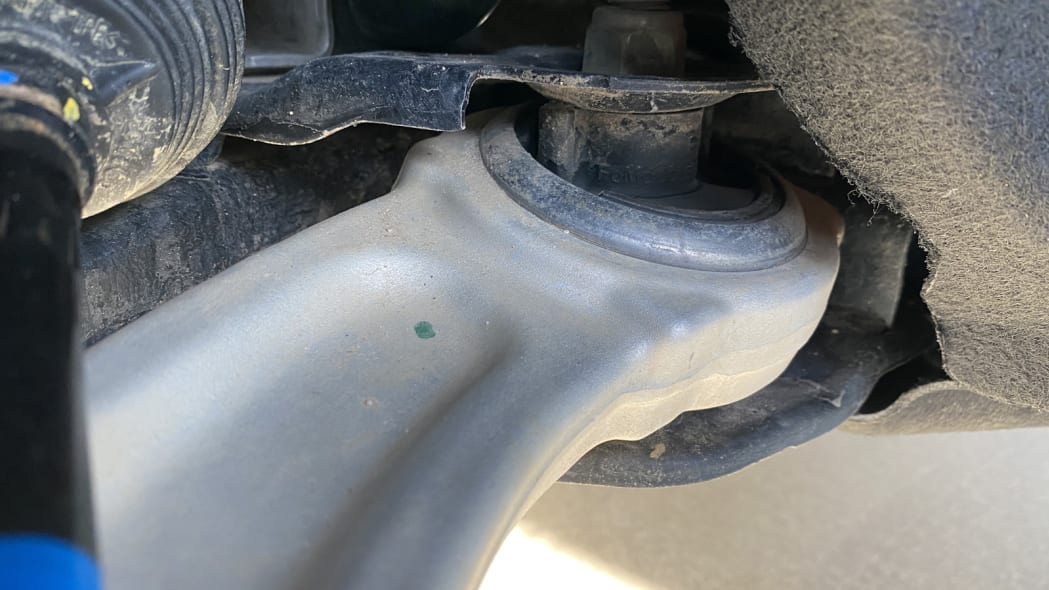 A closer look at the lower control arm’s rear bushing shows details in its molded rubber shape that are calibrated to absorb inward pulses. 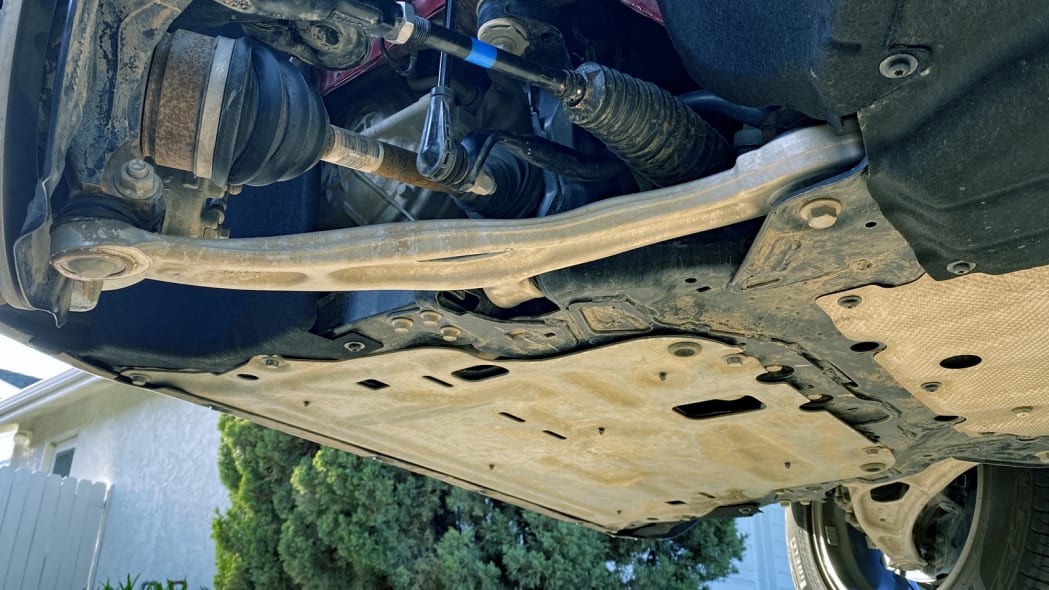 My Badlands had a full-with aluminum skid plate attached to the underside of the front subframe. It’s more substantial that I’m used to seeing on vehicles in this class, although I’m kicking myself for not removing it to see how well it protects various hangy-downy bits, such as the lower radiator tank. 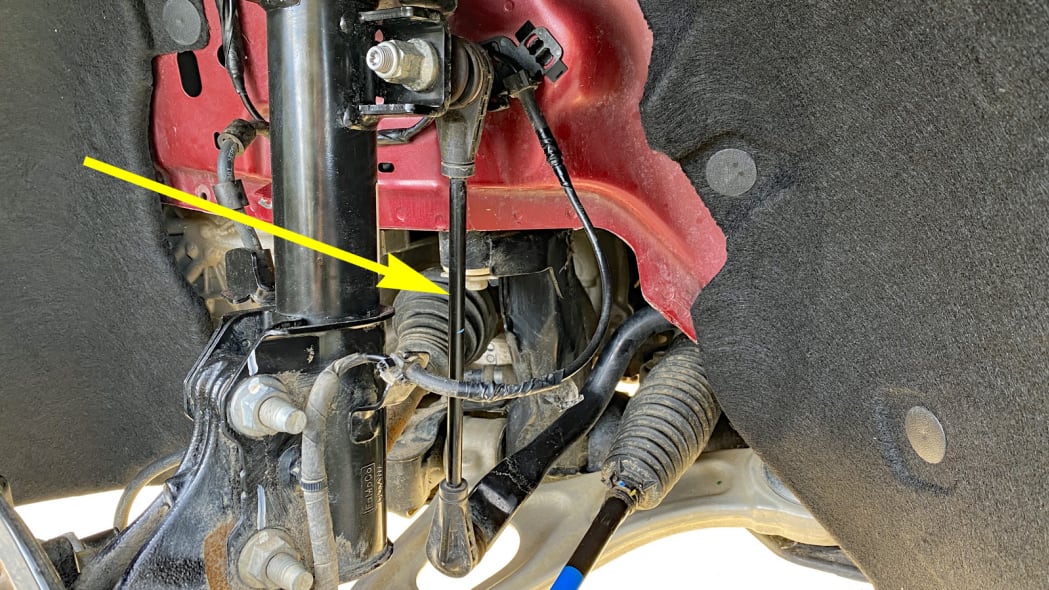 The front stabilizer link (yellow) is attached directly to the strut housing. This makes it a direct-acting mount that gives the stabilizer bar a 1-to-1 motion ratio. 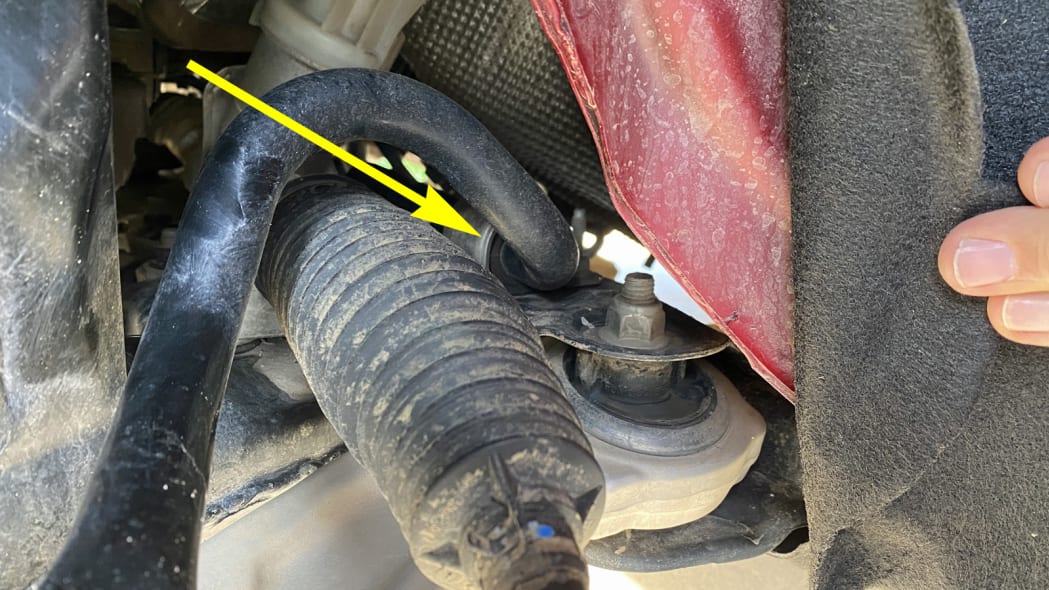 The stabilizer bar itself loops up and over the steering rack to pivot bushings (yellow) that are tucked inboard of the rear bushings of the lower control arm. 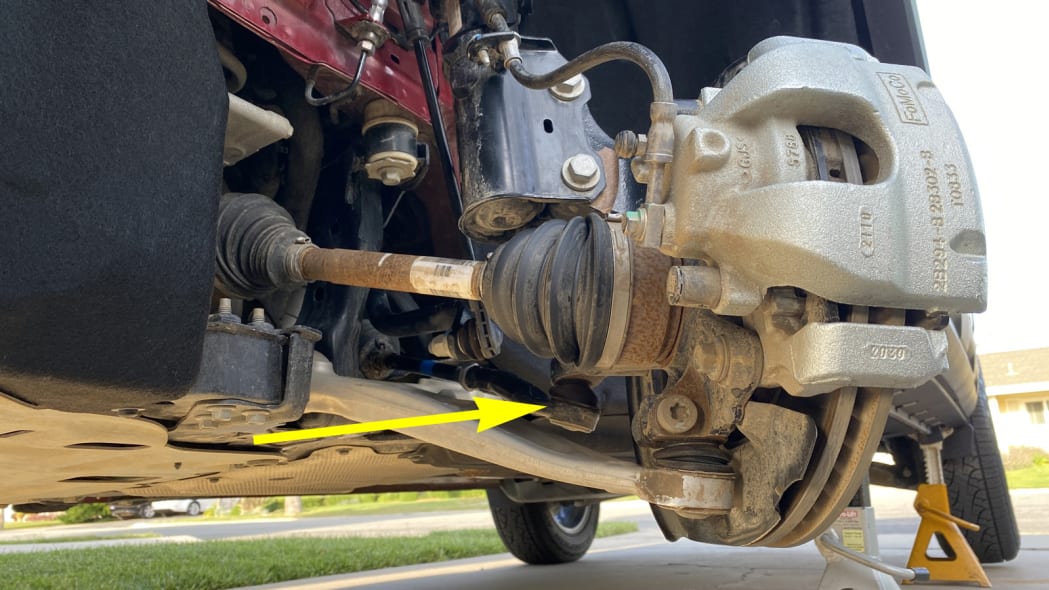 With the steering rack and steering arm (yellow) running behind the drive axle, the brake caliper must occupy the unoccupied space opposite up front. This one is a single-piston floating caliper, and it clamps onto a fairly chunky ventilated front rotor with a decent amount of heat capacity. 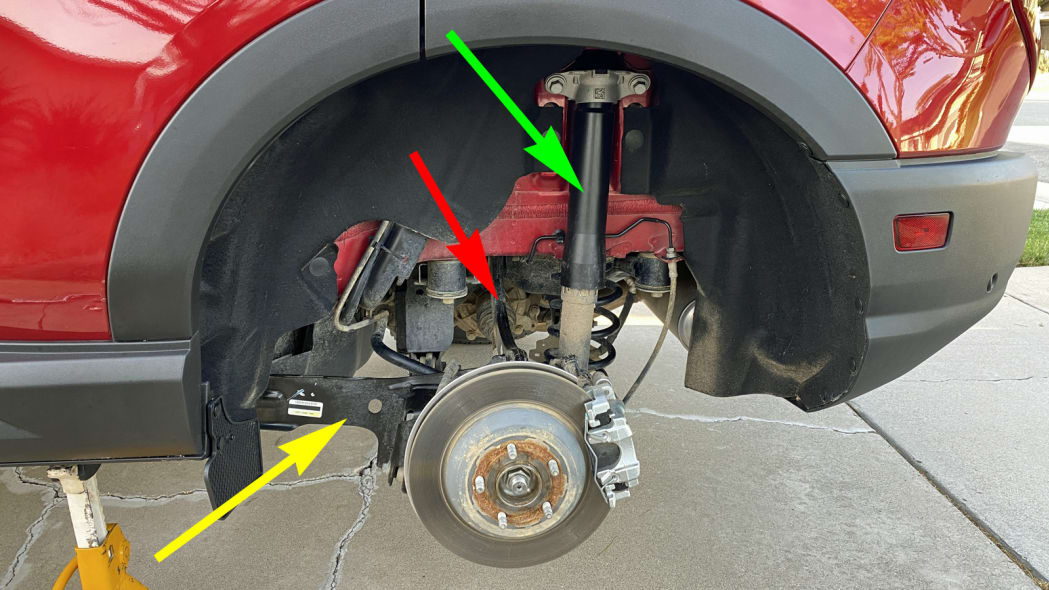 Moving to the rear, we can see a prominent trailing arm (yellow), a long vertically-mounted damper (green), and at least one lateral link (red). 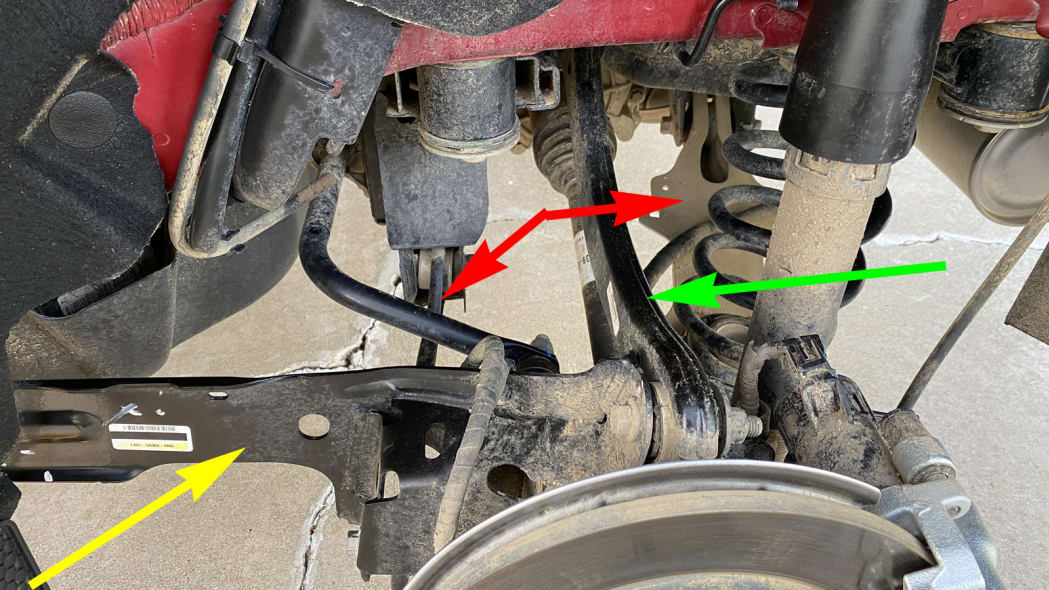 This looks like what Ford once called control blade multilink suspension, named for the thin cross section (yellow) of the main trailing arm. From here we can also make out three links: one lone upper link (green) that’s very easy to see, and two slightly less visible lower ones (red) that we’ll get a better look at later on. 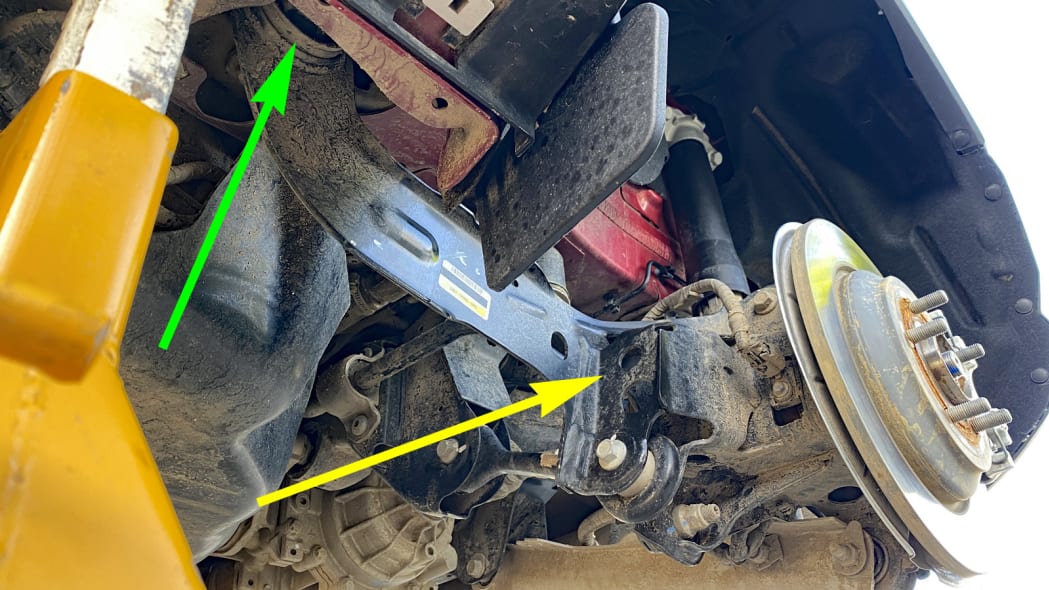 Here it’s obvious that the trailing arm and the rear knuckle (yellow) are joined together in one big steel weldment. This means the trailing arm is 100% responsible for both the fore-aft location of the wheel and the control of acceleration and brake torque. That massive leading bushing (green) is also designed to take the edge off the rearward component of impacts like pothole strikes. Taken together, these trailing arm traits make it so the lateral links only need to concern themselves with lateral loads. That makes the tuning engineer’s job much easier when it comes to optimizing their bushings, and it’s why I’m always happy when I see this variety of multilink suspension. 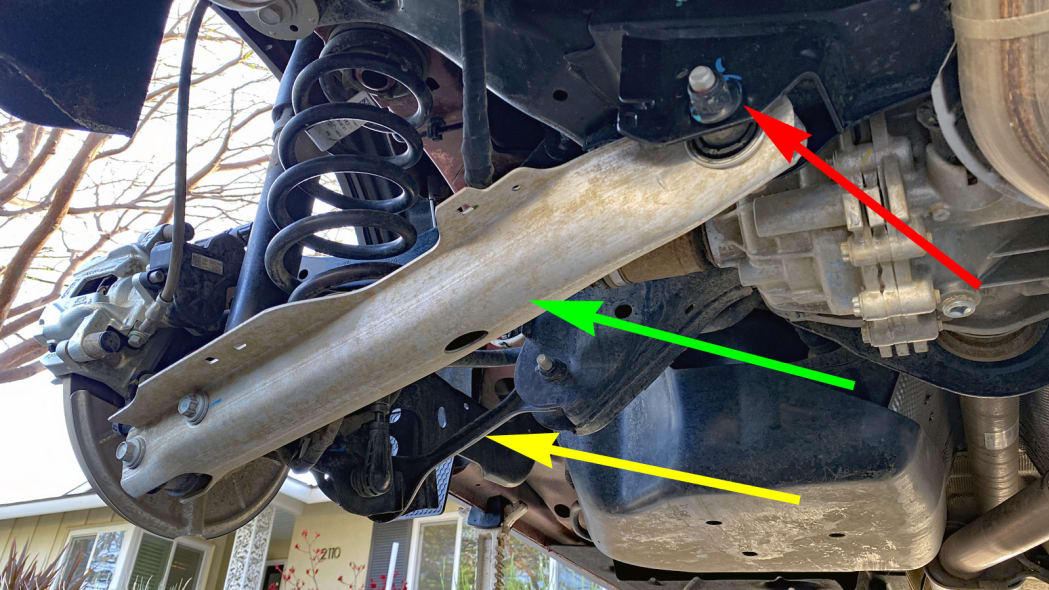 Here we can see the pair of lower links we only got a hint of before. It’s clear that the front one, called the toe link (yellow), is much shorter than the main transverse rear link (green). The irony here is the rear link has an inboard eccentric (red) for setting static toe-in. So why is the front one really the toe link?

You have to picture what happens when the suspension moves, particularly when the outside tire compresses in a long corner. The shorter toe link will swing in a much tighter arc than the longer rear link, and that will tend to pull the forward edge of the tire inward and increase rear toe in for an added dose of stability in long sweeping corners. Thing is, something has to give in order for that to happen. 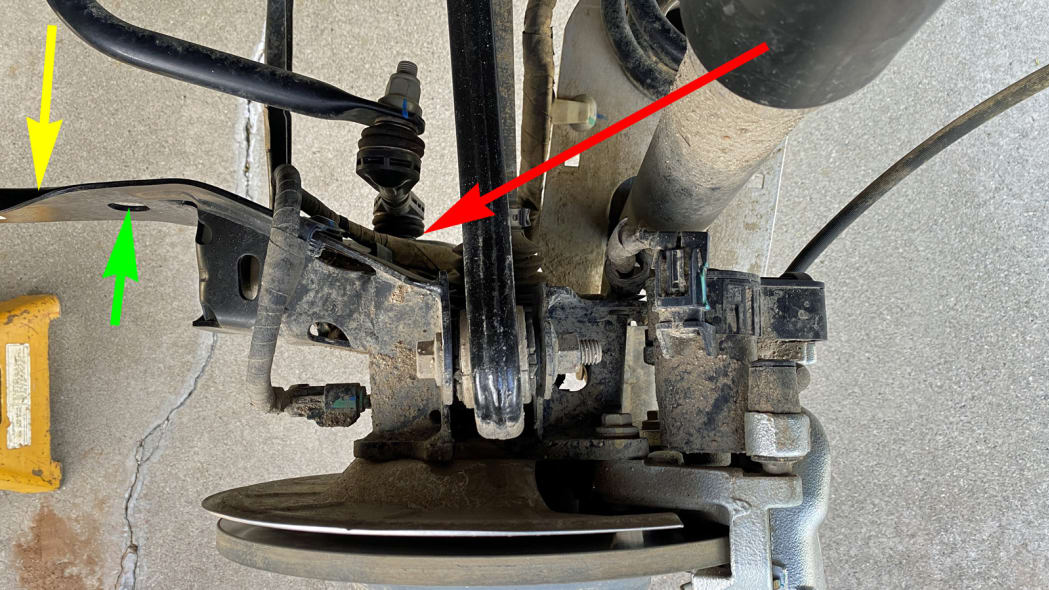 That ‘something’ is a bit of lateral flex in the trailing arm. Some of that comes from lateral squishing of the big bushing we saw at its forward end, but additional give comes from the lack of a 90-degree stiffening fold (yellow) and the diminished cross-section caused by the obvious hole (green) we can see here just ahead of the welded structure.

But there’s something else of interest here, and it’s the stabilizer bar mounting point (red). The link mounts directly to the trailing arm, but that doesn’t give this mount a 1-to-1 motion ratio. 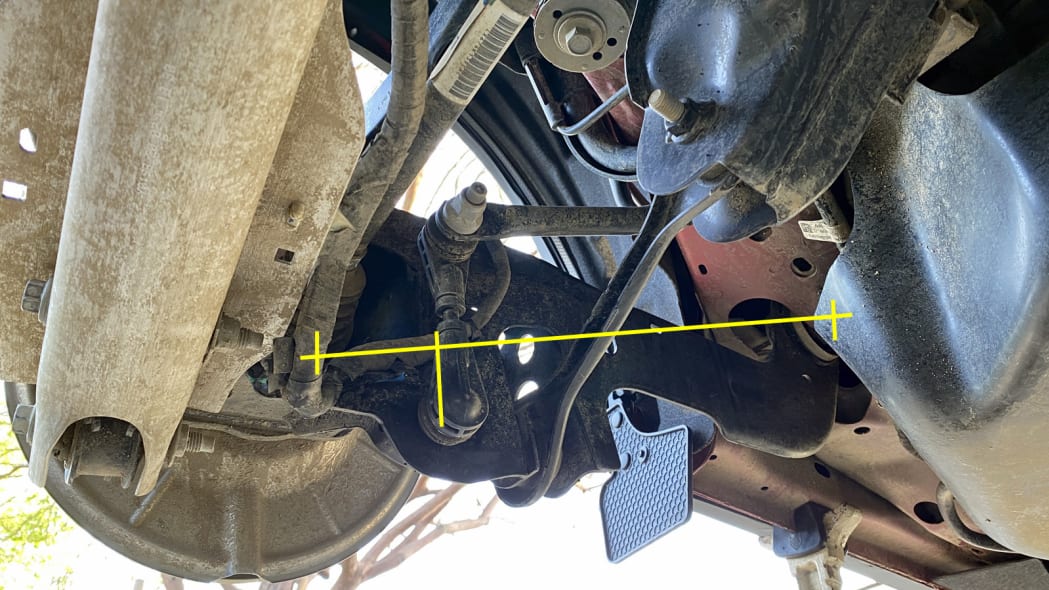 That’s because the trailing arm itself swings in an arc that’s centered at its forward bushing, and the stabilizer link mounting point is slightly forward of the location of the hub, which can be inferred from the position of the drive axle boot. The offset isn’t as large as mystic marks seem to indicate. It’s still pretty efficient at 0.90 or 95-to-1 or thereabouts, but what it’s not is 1-to-1. 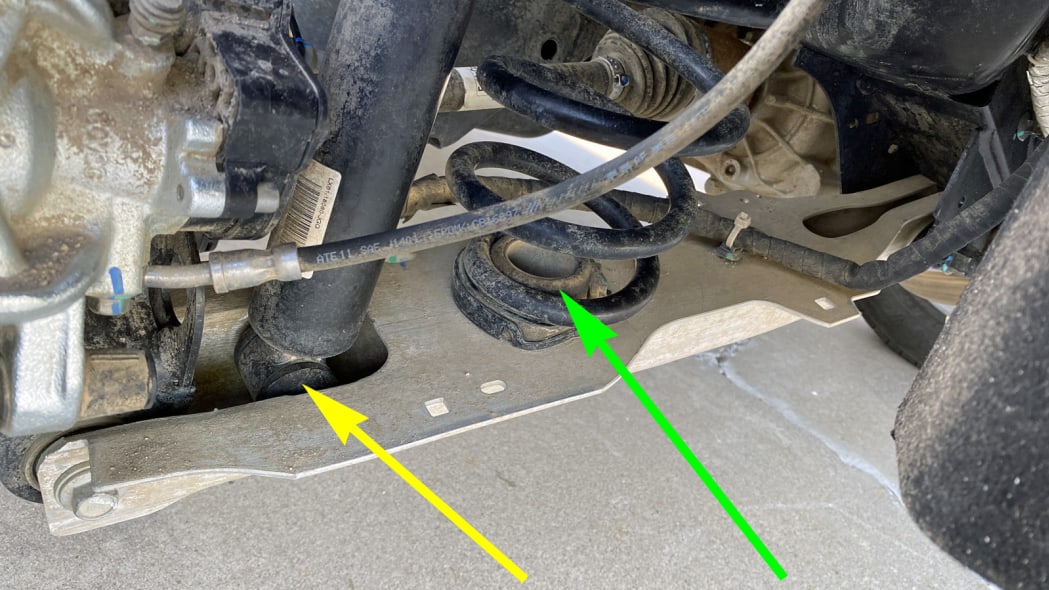 This image shows that the main transverse lower link is doing a lot of heavy lifting. The damper (yellow) and spring (green) mount directly to it, but I also appreciate the simplicity of its aluminum design. This part also looks reversible, which means that left and right-hand examples are probably the same part. 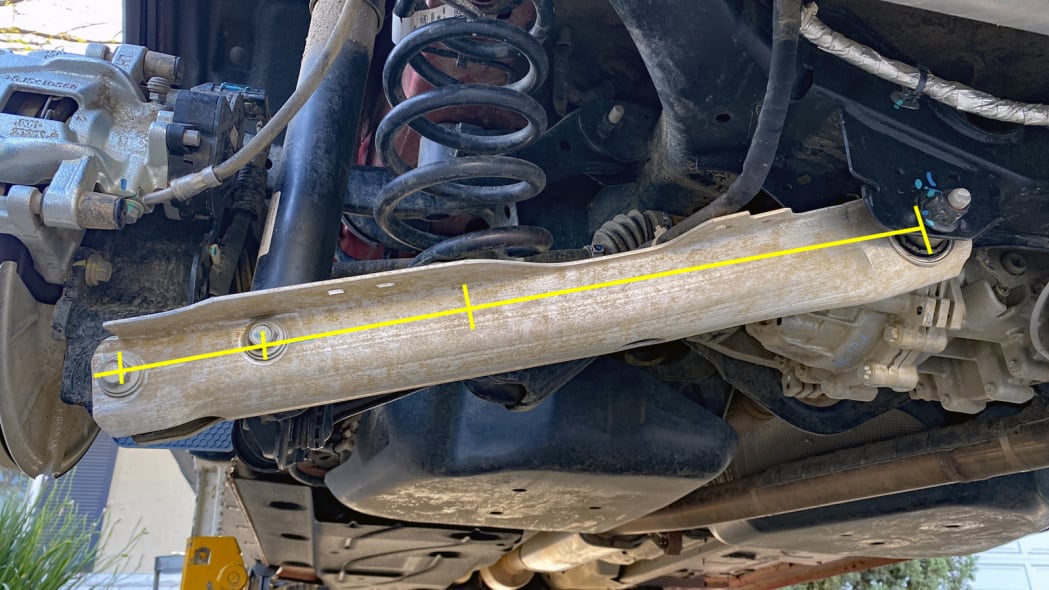 But that’s not quite right in this case because the outer bolt does not move 1-to-1 with the rear wheel. It’s part of the trailing arm structure, so it’ll move some 10% MORE than the tire because it’s mounted behind the axle centerline. Check back a couple of pictures to see what I mean. If the rear lateral link’s outer pivot has a motion ratio of 1.1 or thereabouts, we need to boost the motion ratios of the spring and damper mounting points along its length accordingly. 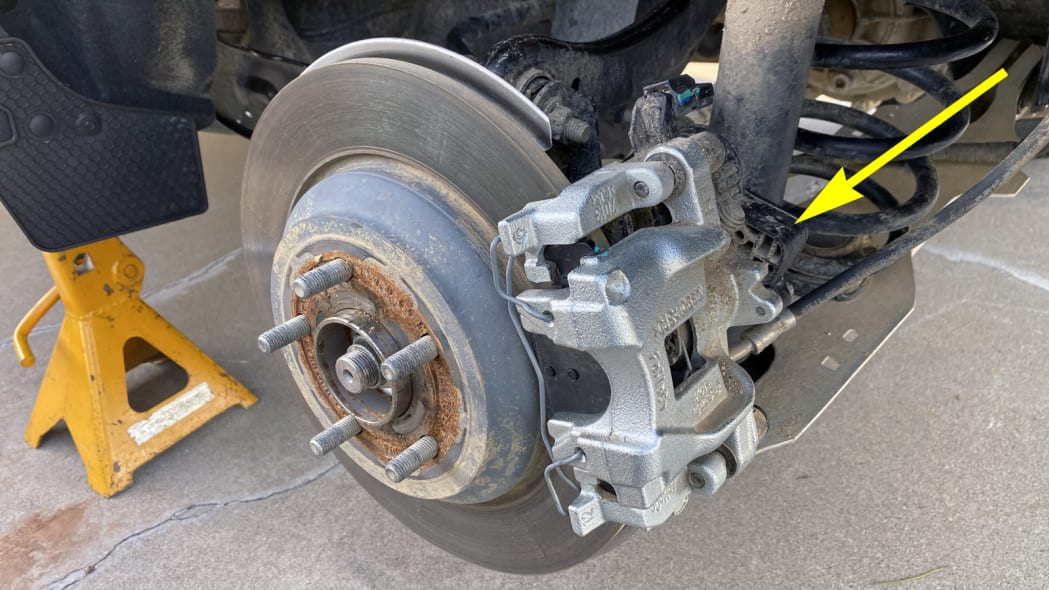 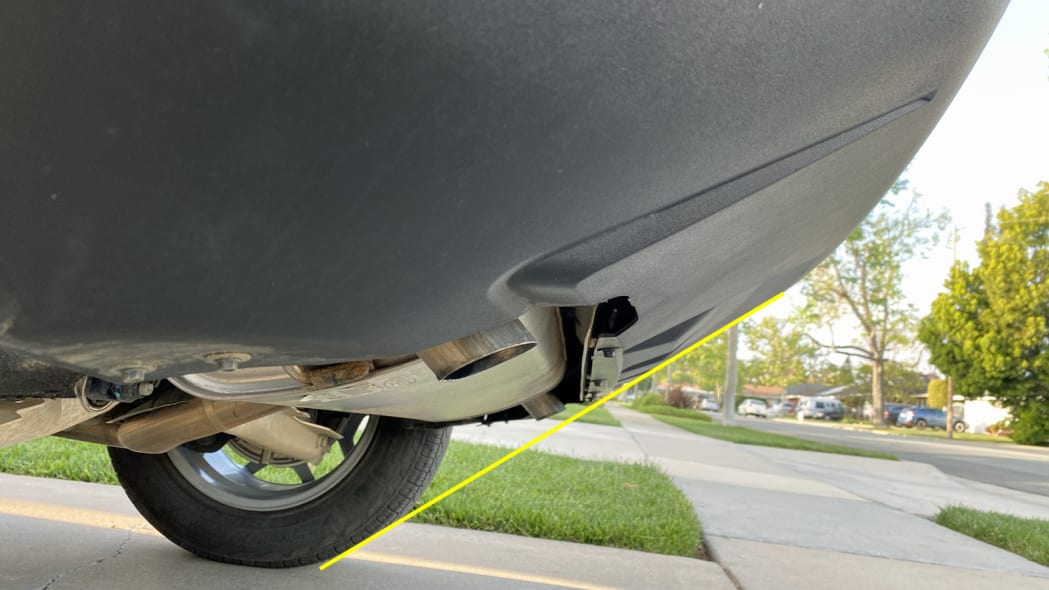 This doesn’t have anything to do with suspension, but while I was under here I thought I’d share how the muffler body and exhaust tips are neatly packaged so they’re not inside the departure angle’s drag zone. Pretty tidy. 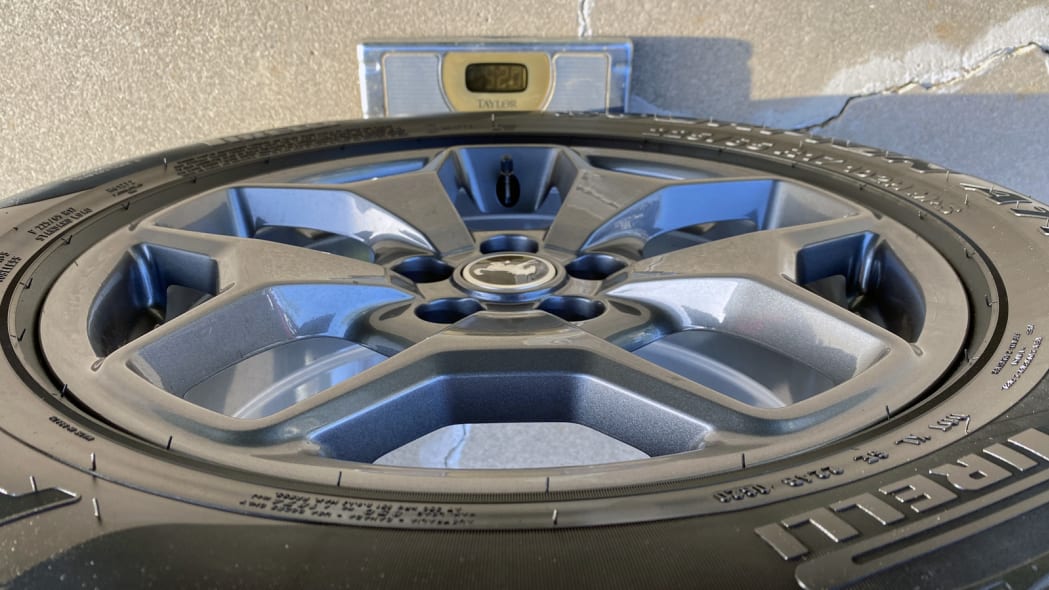 The Badlands, as I mentioned earlier, rides on 225/65R17 tires that measure 28.5 inches in diameter. They are Pirelli tires with a fairly tame pattern that performs well in terms of ride comfort and tread quietness, but I wouldn’t hold anything against anyone who opted to give some of that away in favor of a more aggressive all-terrain tire. As it stands, this combination weighs a respectable 52 pounds. Expect that to go up substantially if you opt for a larger or more aggressive tire.

All of the above adds up to a competent off-road worthy crossover SUV, particularly because the dimensions of the Bronco Sport are well-optimized for off-highway use. The Badlands in particular has a lot more going for it in terms of its larger 2.0-liter turbocharged four-cylinder engine and its higher-spec AWD system with lockable center and rear clutch-based differentials. Sure, it’s not the full-blown body-on-frame Bronco that’s designed to slot in between a Toyota 4Runner and a Jeep Wrangler Unlimited, but I think there are a lot of buyers out there that don’t need it to be. Ford certainly thinks so.