The 2021 Cadillac XT5 plays in what’s become the most popular of all luxury segments: two-row crossovers. It does so with typical Cadillac nebulousness, straddling the line between size segments with the promise of getting more for your money than what the Germans might offer. And while it is cheaper than much of the midsized competition, you lose out in other areas.

Style is always subjective, but inside and out, we find most of its competitors from Germany and elsewhere more compelling. The blacked-out Sport trim adds a bit of pizazz, but nothing about the design is memorable. We’re less than enamored with the powertrain options, too. The base four-cylinder is refined but less powerful than what competitors offer, while the V6 is hardly much of a performance upgrade and is shared with multiple non-luxury GM vehicles to boot. Some of the available tech is enticing at this price point, but an uninspired interior and lackluster drive experience would have us recommending many of the XT5’s rivals over it, regardless of which segment they belong.

Cadillac gave the XT5 a mid-cycle refresh last year, and you can find those 2020 changes here.

Similar to the exterior design, the interior is rather forgettable. It’s covered in leatherette most places you look and touch (though much of it can be swapped to genuine leather with the Platinum Package). The styling comes off as old and uninspired (and has since this generation was brand new). There’s a mix of the typical GM corporate plastic and Cadillac-specific glossy bits, but the ratio doesn’t seem right. And then there’s a splash of metal tossed in for the climate controls that are frustratingly slow to respond. Done up in the right color upholstery (available on upper trims), there’s a touch of intrigue with the extensive use of leather-look or real leather facing the occupants. Otherwise, it’s lacking in character and verging on boring compared to some of the more dashing dashes seen in other luxury crossovers like the Lincoln Nautilus, Volvo XC60 and the usual suspects from Germany.

There’s no especially great rebound in usefulness and utility. The little cubby in the dash ahead of the shifter is weirdly useless (anything you put in there will just slide out upon accelerating), and there’s little space to stuff things in besides the cupholders. At least the vertical phone slot in the center console is great — it’s a perfect, space-efficient spot to place your phone out of the way and charge it while driving.

Some of the tech in the XT5 is impressive, but in other ways Cadillac is far behind its competition. The 8-inch infotainment touchscreen is nothing special these days, and you’ll be missing out on the whiz-bang features and dramatic interfaces found in many competitors (not to mention larger screens). However, it has all of today’s expected content and is refreshingly easy to use. We also like that its touchscreen is bolstered by a redundant rotary dial, which is a useful tool for scrolling through onscreen lists.

Cadillac goes back into the loss column with its cheap-looking analog instrument cluster. Most of the competition has transitioned to an all-digital cluster, but Cadillac still hasn’t fully modernized the XT5, instead opting for a central cluster screen controlled via steering wheel buttons. A heads-up display is optional, and so is Cadillac’s helpful Night Vision tech. 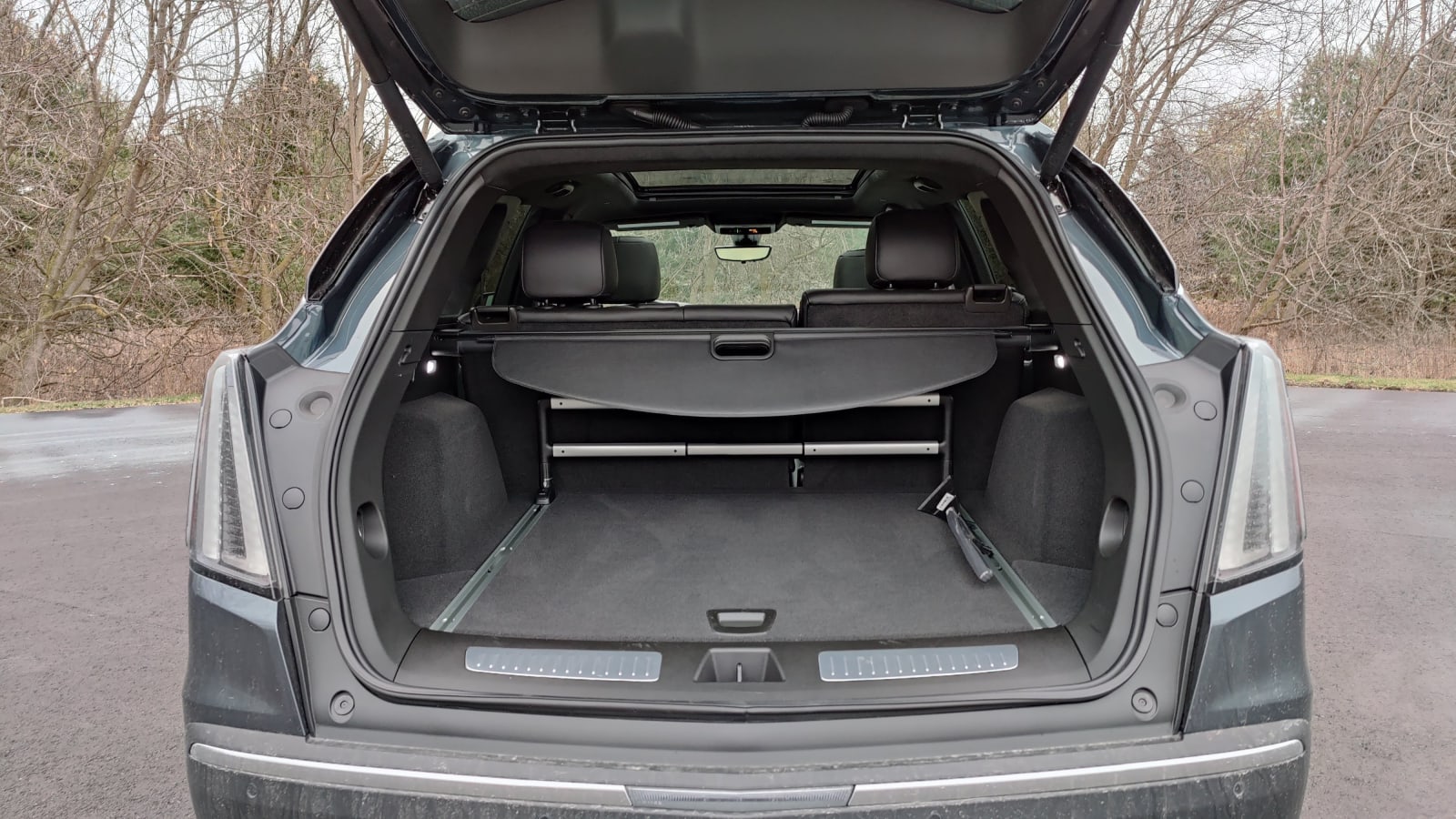 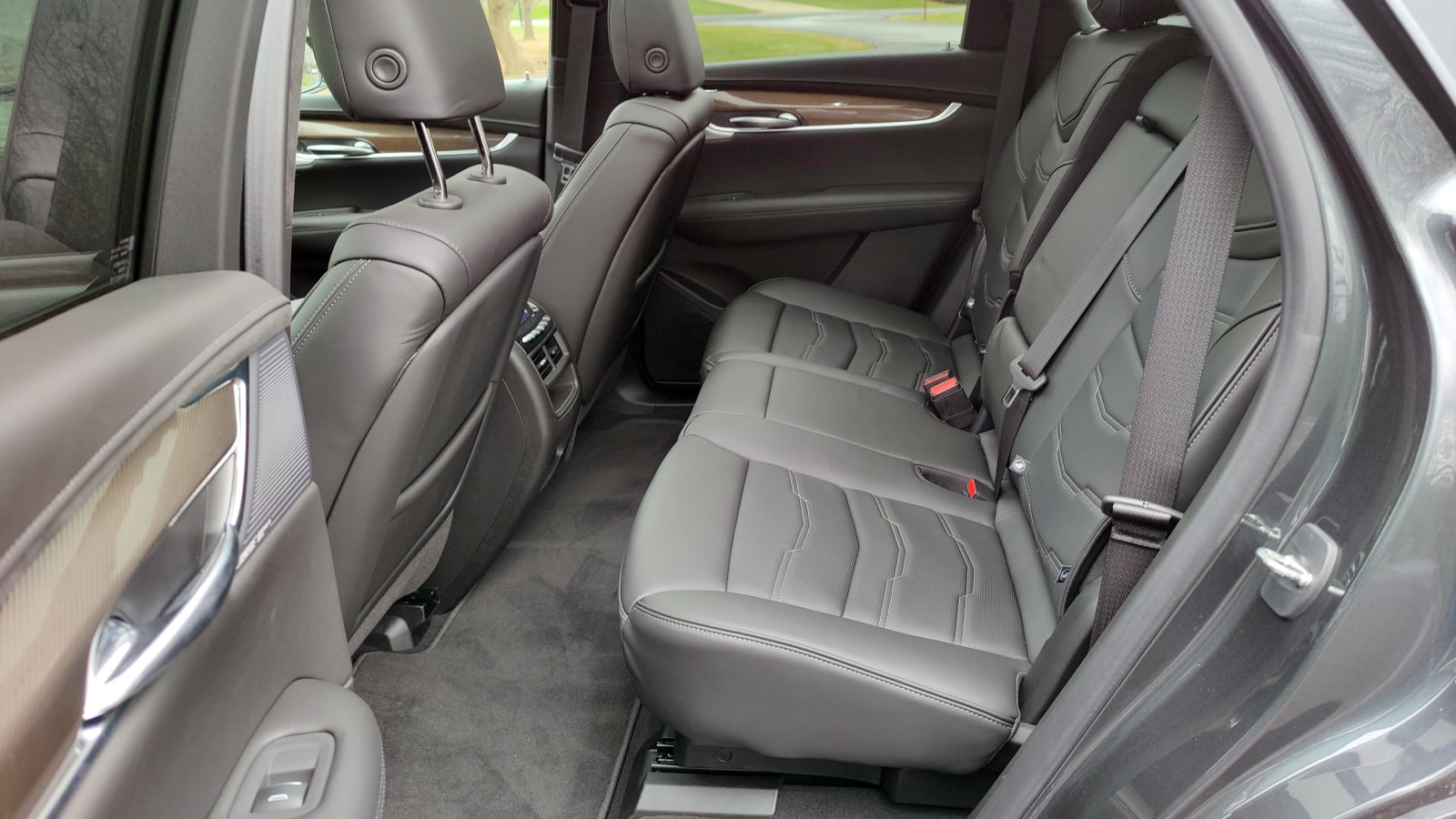 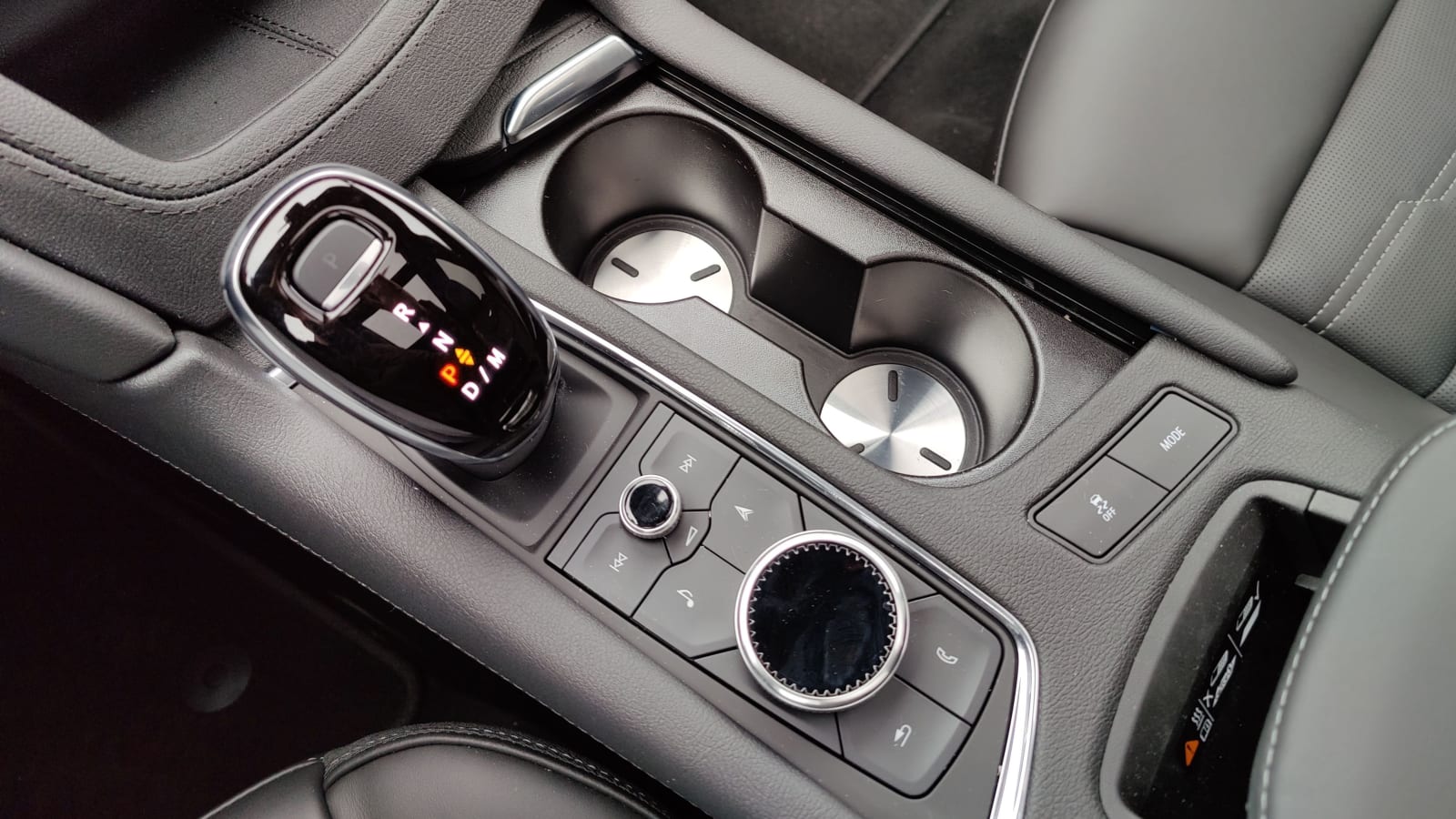 The XT5 looks big, blocky and chunky from the outside. It’s about the same length as a Lincoln Nautilus, its main American rival. However, the XT5 doesn’t neatly slot into any category. It’s bigger than a BMW X3 and Mercedes GLC-Class, but smaller than an X5 or GLE-Class. This avoidance of classic size structures is nothing new for Cadillac, as its sedans have long played by the same playbook, including today’s CT4 and CT5.

Cadillac takes advantage of the XT5’s bigness with an expansive rear seat, easily besting smaller, similarly priced rivals at 39 inches of rear legroom. The rear cargo area is predictably big at 30.2 cubic-feet, but the Lincoln Nautilus offers more — an Acura RDX is just about the XT5’s equivalent in cargo space. In general, it’s more closely aligned with midsize offerings in overall space, but undercuts those rivals in price. That leaves Cadillac with a legitimate value argument to be made. As we get into the performance and driving sections below, though, we’ll find some holes in that argument. 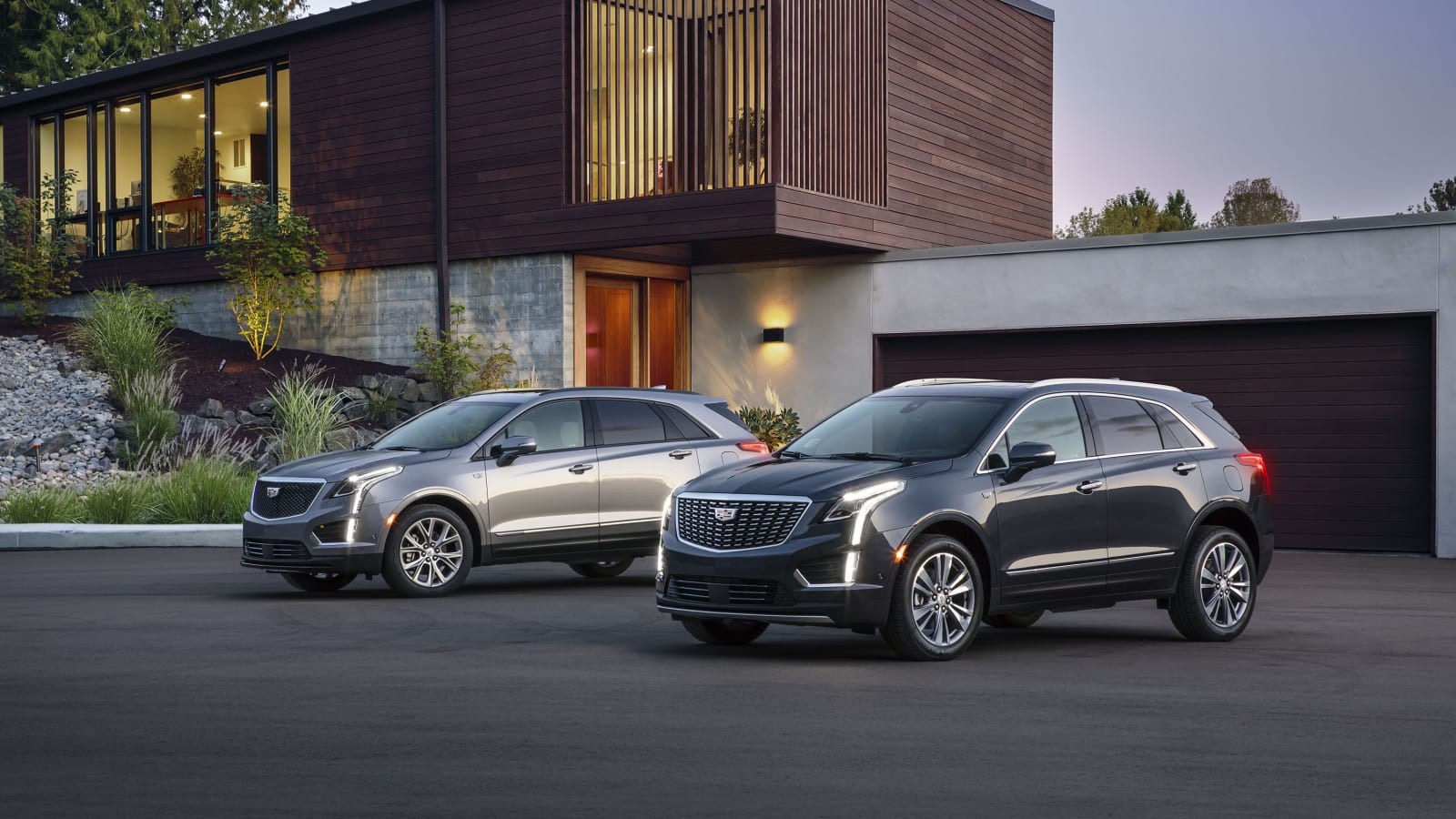 Cadillac offers a choice of two engines in the XT5, but neither is particularly powerful or exciting. The base motor is a 2.0-liter turbocharged four-cylinder that makes 237 horsepower and 258 pound-feet of torque. It’s paired with a nine-speed automatic transmission and front-wheel drive standard. It tops out at 22 mpg city, 29 mpg highway and 24 mpg combined in this form. Adding all-wheel drive (optional) brings those figures down to 21/27/23 mpg.

A 3.6-liter V6 is available on the Premium Luxury trim and standard on Sport. This upgrade engine makes 310 horsepower and 271 pound-feet of torque. It’s also paired with a nine-speed automatic and available with either front- or all-wheel drive. The front-drive version returns 19/26/21 mpg, while the all-wheel-drive model only loses 1 mpg from that in the city. 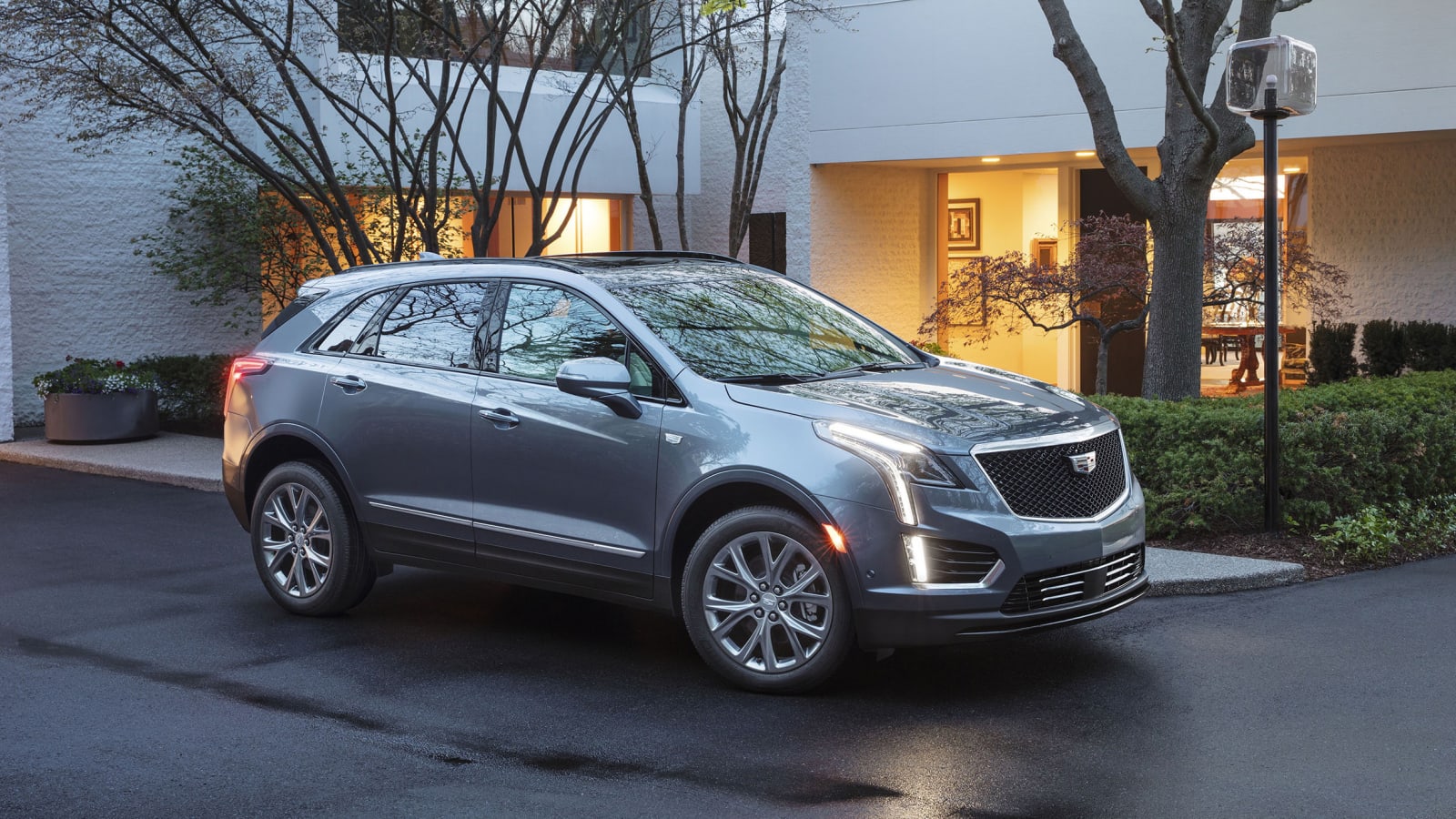 Cadillac likes to suggest that the XT5 is a sporty crossover, but it’s far off the pace of its rivals when it comes to driver engagement. On the upside, its supple ride and isolated cabin make the XT5 a great vehicle for eating up highway miles or simply making the daily slog to and from the office. It’s quiet inside with all of Cadillac’s extra noise dampening, and even the Sport trim with its more aggressive adaptive dampers is seemingly tuned with comfort in mind.

We haven’t driven an XT5 with the four-cylinder yet, but our impressions of it in the smaller XT4 are generally positive. The big torque figure is likely to make it feel just as potent around town as the V6 – and perhaps more since that torque arrives lower in the rev range. By contrast, you need to get the V6’s revs up into the mid and upper range before it starts to pull as strongly. Our butt dyno estimates a 0-60 mph time in the low-to-mid six-second range, and while the V6 does sound better than a silent, whooshing turbo-four, it’s not an especially pleasing note. Just make sure you get an AWD model if you don’t want to fight torque steer.

If you care for handling, you’ll want the Sport trim. Its enhanced “Sport Control AWD” system has torque vectoring capabilities that neither the Luxury nor Premium Luxury trims offer. It also gets the aforementioned adaptive dampers that continuously adapt to the road but can be manually stiffened with Sport mode for less lean in corners. Lastly, the Sport gets a quicker steering rack that makes it feel that much more agile — the steering itself is rather numb, though. None of these efforts can hide how heavy and big the XT5 feels on the road, and it definitely doesn’t feel as athletic and sophisticated when driven quickly as Cadillac’s CT4 and CT5 sport sedans, nor competitors like the Audi Q5, BMW X3, Mercedes GLC or Acura RDX  .

What more can I read about the XT5?

Our first chance at the totally new and redesigned XT5 where we go over its engineering and details.

Cadillac releases a mid-cycle update for 2020, and this is what’s new. 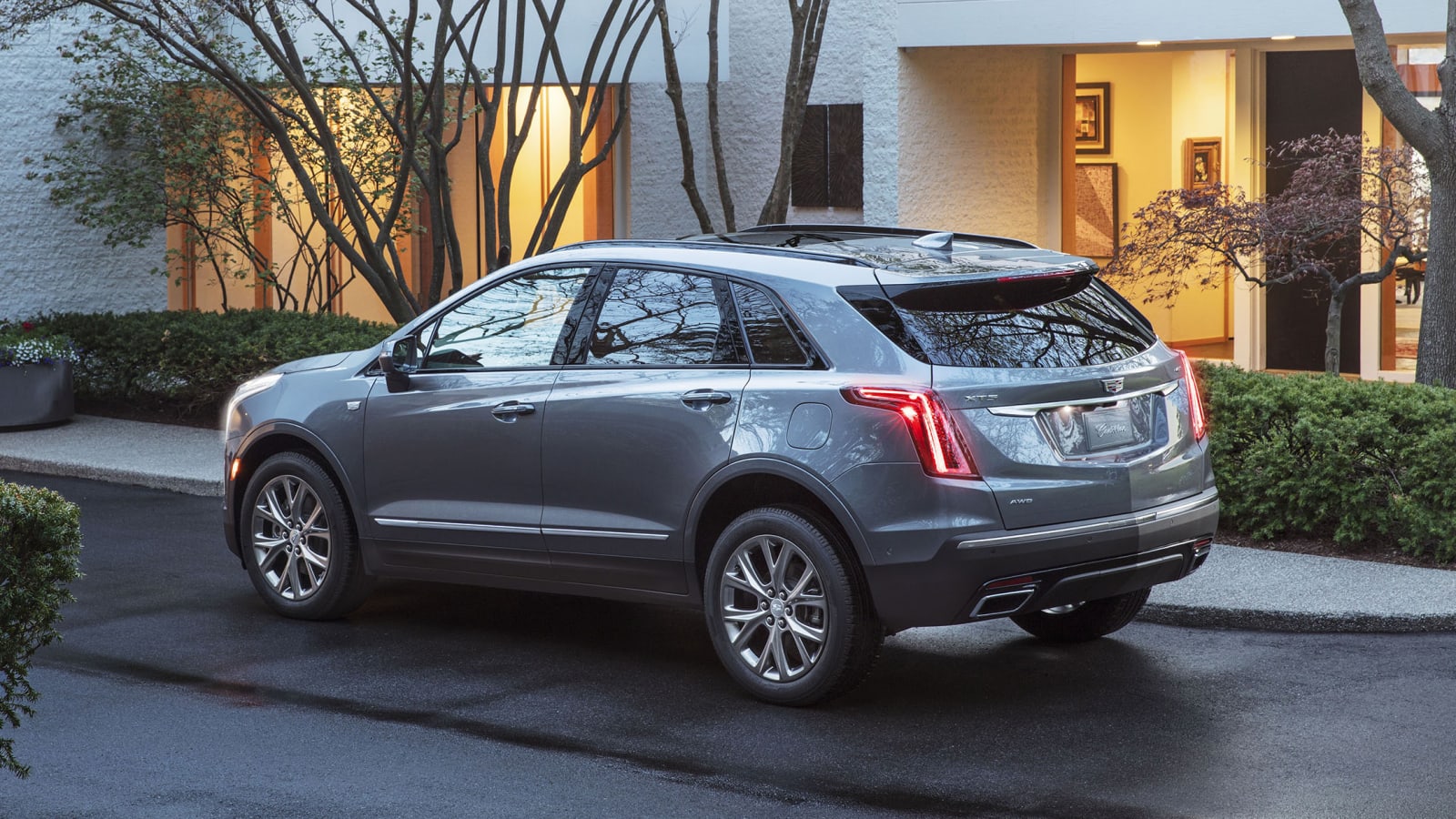 The Premium Luxury bumps the price up to $49,790 and adds some luxury features like a panoramic sunroof, wireless phone charger and more. It also unlocks the ability to spec the 3.6-liter V6 for an extra $1,000 over the four-cylinder.

A Sport is only available with all-wheel drive and the V6, and it starts at $56,090. You get unique styling with tons of black accents, all of the previously mentioned handling/drivetrain upgrades, 20-inch wheels and all the extra niceties that come on the Premium Luxury trim.

Below is the full pricing structure for the 2021 Cadillac XT5, including destination charge. You can find a breakdown of features, specs and local pricing here on Autoblog.

The Cadillac XT5 was tested by the Insurance Institute of Highway Safety and earned Good ratings in all crash tests. However, a Moderate headlight rating keeps it from being a Top Safety Pick award winner. Similar to the excellent IIHS ratings, the National Highway Traffic Safety Administration scored the XT5 well with a five-star overall crash test rating.