Wear a helmet, whether you're a biker or a Viking

We now know that the 2021 Cadillac CT4-V is not the performance pinnacle of the line – that would be the 472-horsepower Blackwing. As it is, all the outrage spewed in the direction of Cadillac when it announced the once-great CT4-V was being downgraded to more pedestrian levels was ultimately much ado about nothing. Still, there’s a kernel of truth to the notion that the new CT4-V (or CT4 V-Series as it’s also known) just doesn’t go far enough – or more accurately, the gap between it and the supposedly lesser CT4 Premium Luxury trim is surprisingly small.

After driving the CT4 Premium Luxury with the optional 2.7-liter “450T” engine, I wrote here on Autoblog, “It’s legitimately fun. You can feel the immense strength of the chassis, as well as the impeccable suspension tuning when hustling the car along. You also just feel things. There seems to be less cushion and fewer 1‘s and 0’s between you and the car compared to other sport sedans like the BMW 3 Series and new Acura TLX. The steering has a lot to do with it: consistently weighted, regardless of drive mode, without too much speed-based adjustment, and genuine feedback filtered through the steering wheel. At the same time, the CT4 seems far more grown up and sophisticated in its engineering than the various front-drivers it competes with on price.”

After driving the CT4-V five months later, I wrote some notes on my computer. I later discovered they were virtually identical in overall impression to what is pasted above. It was like I had driven the same car twice. The resulting conclusion: I’d really need to exuberantly drive them back to back to notice a difference, especially as both cars had all-wheel drive. Even then, maybe not. It’s perfectly plausible that many won’t even notice a difference at all.

The all-wheel-drive point is key, however, because it means this CT4-V did not have the rear-drive version’s Magnetic Ride Control 4.0 that always does wonders for a car’s ride and handling. Maybe it would do so again here, but it’s not like the CT4’s ride or handling, regardless of flavor, needs much help. Much like the Premium Luxury 450T, the AWD CT4-V’s fixed “performance” suspension provides a terrific balance of achieving a fast-attack pace in the mountains while not beating you up everywhere else. It absorbs bumps well and is neither crashy nor harsh. In other words, I didn’t miss Magnetic Ride Control.

What about the V’s Brembo front brakes and mechanical limited-slip differential, which are added regardless of drivetrain? Again, perhaps a back-to-back drive would make a difference, but nothing about either element fundamentally seemed to improve the driving experience or change the overall impression of the CT4 as a great sport sedan. You’d also have to drive a lot harder than would typically be appropriate on a public mountain road.

How about what’s under the hood? This should probably be the least surprising conclusion since even on paper the CT4 Luxury and its $2,500 “450T” 2.7-liter engine option give up little to the V’s own 2.7-liter. The 450T has 310 horsepower and 350 pound-feet of torque; the V has 325 hp and 380 lb-ft. Not insignificant, but we’re talking about slathering excess upon excess here. Both outputs are huge amounts for such a small sedan. According to Motor Week, which has 0-60 tested both cars, the V’s 4.8-second time is only 0.3 quicker than the 450T.

That sure feels right to me. The two perform and feel incredibly similar, for better and for worse. While the V has plenty of low-end grunt, there really isn’t much up high, resulting in a car that seems like it should be quicker than it is. While my lukewarm reaction to the CT4-V has thus far really been a testament to how good the supposedly lesser Premium Luxury is, here it’s a matter of the 2.7-liter just not coming across as a performance engine regardless of its state of tune. Besides its power delivery, it also sounds gravelly and suffers from the same whistling from the turbocharger’s wastegate that’s just as weird and distracting in the Chevy Silverado.

The powertrain complaints end there (and we pick up my earlier theme again) as the CT4-V has the same exceptional 10-speed automatic transmission as the rest of the CT4 lineup. When Sport mode is engaged, it automatically clues into you driving aggressively and actually engages a further performance setting (there’s an alert that pops up in the IP). This bonus Sport mode leaves itself in a lower gear, keeps revs high and eagerly downshifts when braking into turns. This cog-swapping intelligence is on par with some of the best automated manual transmissions, if ultimately falling short of their cog-swapping speeds. It’s so good, I never once pondered using the included paddle shifters. If only our long-term Acura TLX’s 10-speed were this good. 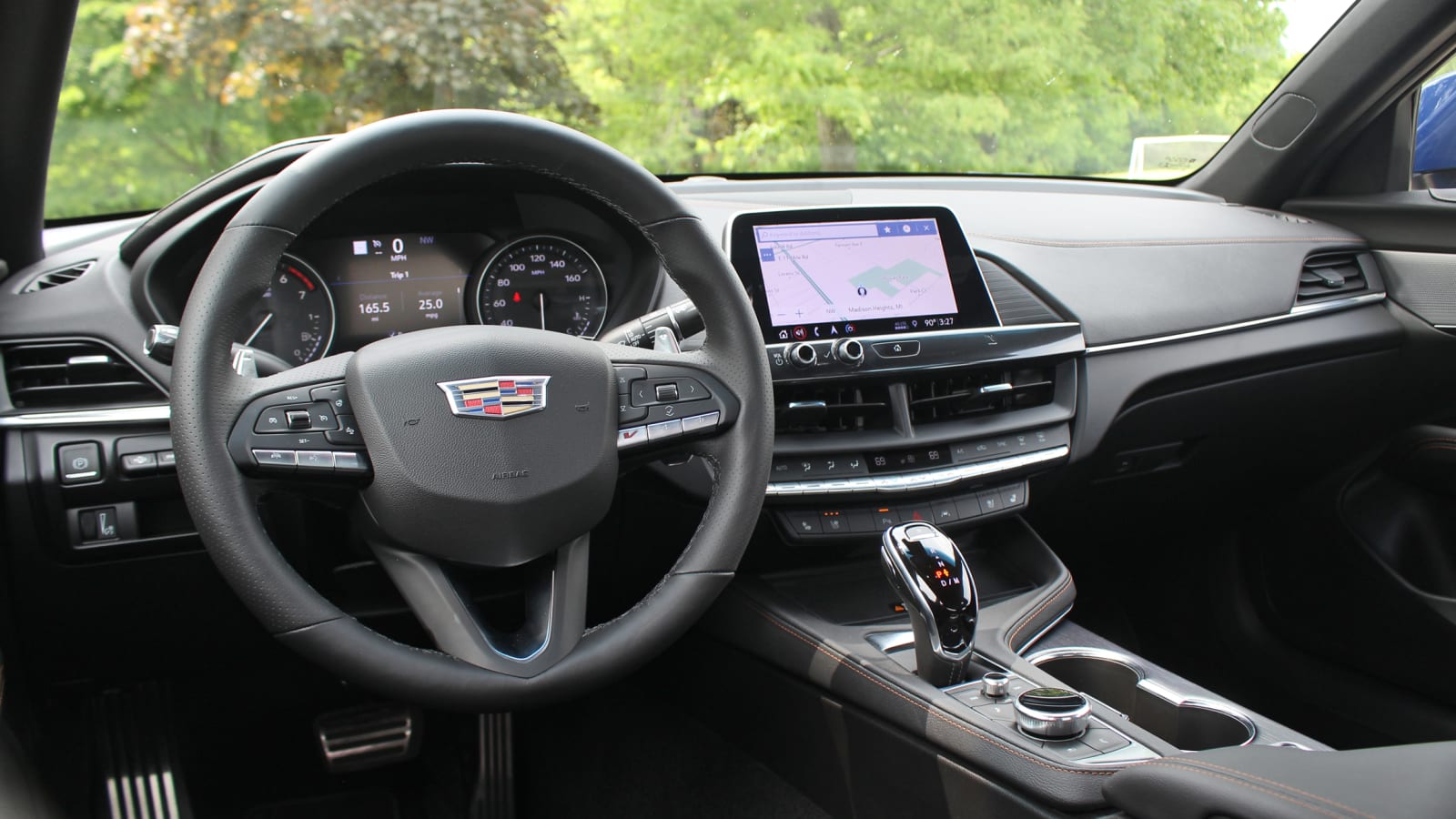 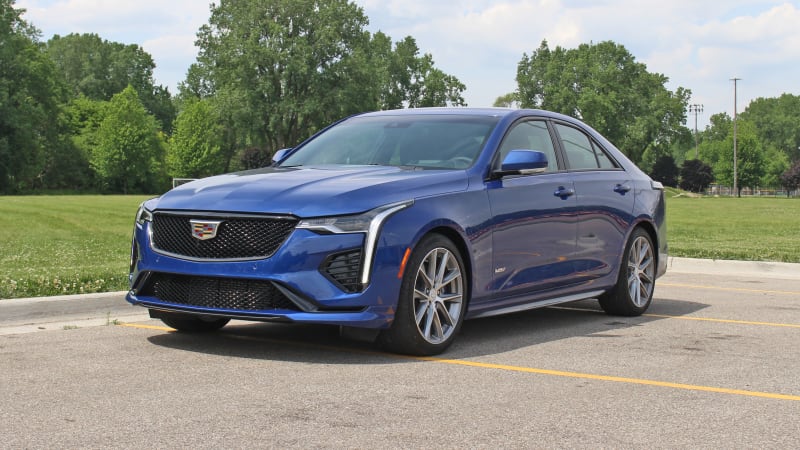 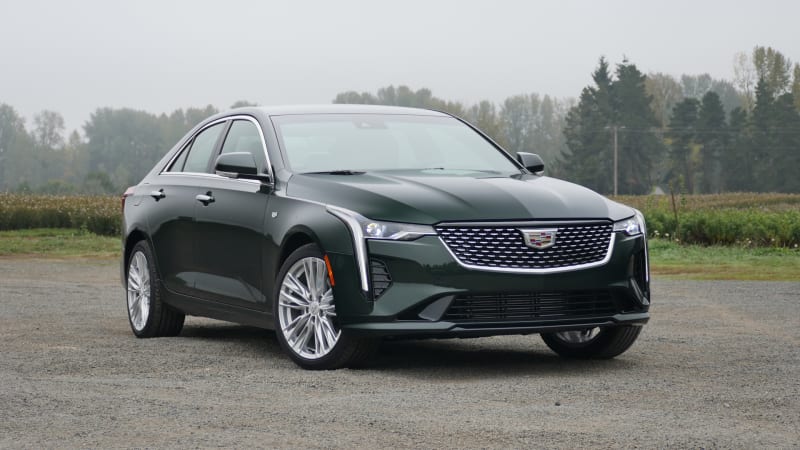 Aesthetically, the case can certainly be made that the CT4-V’s glossy black trim is more modern and visually appealing than the brightwork found on the CT4 Premium Luxury (above right). I suppose a different case could be made that if any brand can pull off brightwork, it’s the one that produced this. Inside, there are few differences apart from the V button on the steering wheel (it engages an admittedly appreciated personalized drive setting) and different color choices. Among these are my V test car’s lovely Sangria red leather and my Luxury test car’s handsome Cinnamon beige leather.

So what about the price difference? The Premium Luxury 2.7 AWD in question had more comfort and convenience equipment, so when I applied the same items to the CT4-V AWD, the difference came out to $49,665 vs. $53,465. That works out to $3,800 for performance upgrades you probably won’t notice (especially considering the AWD doesn’t have the magnetic dampers), but it’s also not that outrageous. So much of buying a luxury sport sedan is about what it can do rather than what you’ll actually do with it. In that spirit, getting extra power, better brakes, a limited-slip diff and, with rear-wheel drive, the magnetic dampers for $3,800 is relatively reasonable. Porsche or BMW would probably charge you $8,000 for all that.

Ultimately, we should never complain about a car company offering its customers a wide degree of choice. Cadillac does just that with the 2021 CT4. Using the name “CT4 V-Series” is probably the more appropriate term, but either way, the car without question provides more of a performance enhancement than the Acura TLX A-Spec or older M Sport BMWs and S Line Audis. Just don’t assume that you have to get the CT4 with the V on the trunk in order to get an exceptional sport sedan.