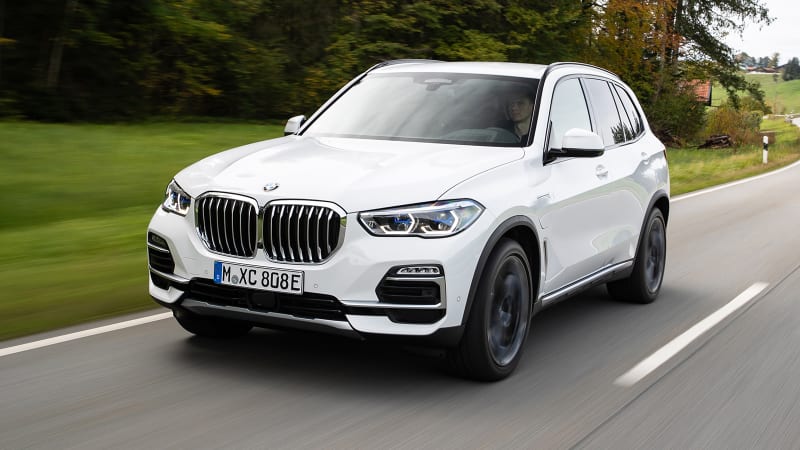 Although full electric cars and internal-combustion engines with mild electric assist are becoming more common, plug-in hybrids, particularly with usable range, are still fairly uncommon. This is especially evident in the luxury market where the 2021 BMW X5 xDrive45e competes. It’s really only directly comparable to a couple of crossovers. But among this small set, it’s the most usable hybrid and the best value, even if it’s not a standout elsewhere.

For 2021, BMW made big improvements to the hybrid powertrain, adding power and battery capacity. The old 2.0-liter turbocharged four-cylinder is gone in favor of a turbo 3.0-liter inline-six (the eight-speed automatic and standard all-wheel drive remain). The same 111-horsepower electric motor is used, but the bigger engine helps bring total output up to 389 horsepower and 443 pound-feet, compared to the 308 horsepower and 332 pound-feet of the last model. The increased output also shaves the 0-60 mph time from 6.5 seconds to 5.3. Those are noteworthy improvements, but the X5 remains less powerful than its plug-in-hybrid competitors, the 400-horsepower Volvo XC90 T8 Recharge, the 455-horsepower Porsche Cayenne E-Hybrid and the 494-horsepower Lincoln Aviator Grand Touring.

More importantly, at least for the hybrid aspect of the BMW, is that its battery capacity of 24 kWh has been more than doubled. Electric range is subsequently now 30 miles, 16 more than before. That tops the Lincoln at 21 miles, the Volvo at 18 miles and the Porsche at just 17 miles. With that being said, the XC90, Aviator and Cayenne are more efficient after the battery is drained than the BMW. The Volvo manages 27 mpg combined, the Lincoln 23, the Cayenne 21, and the BMW 20. 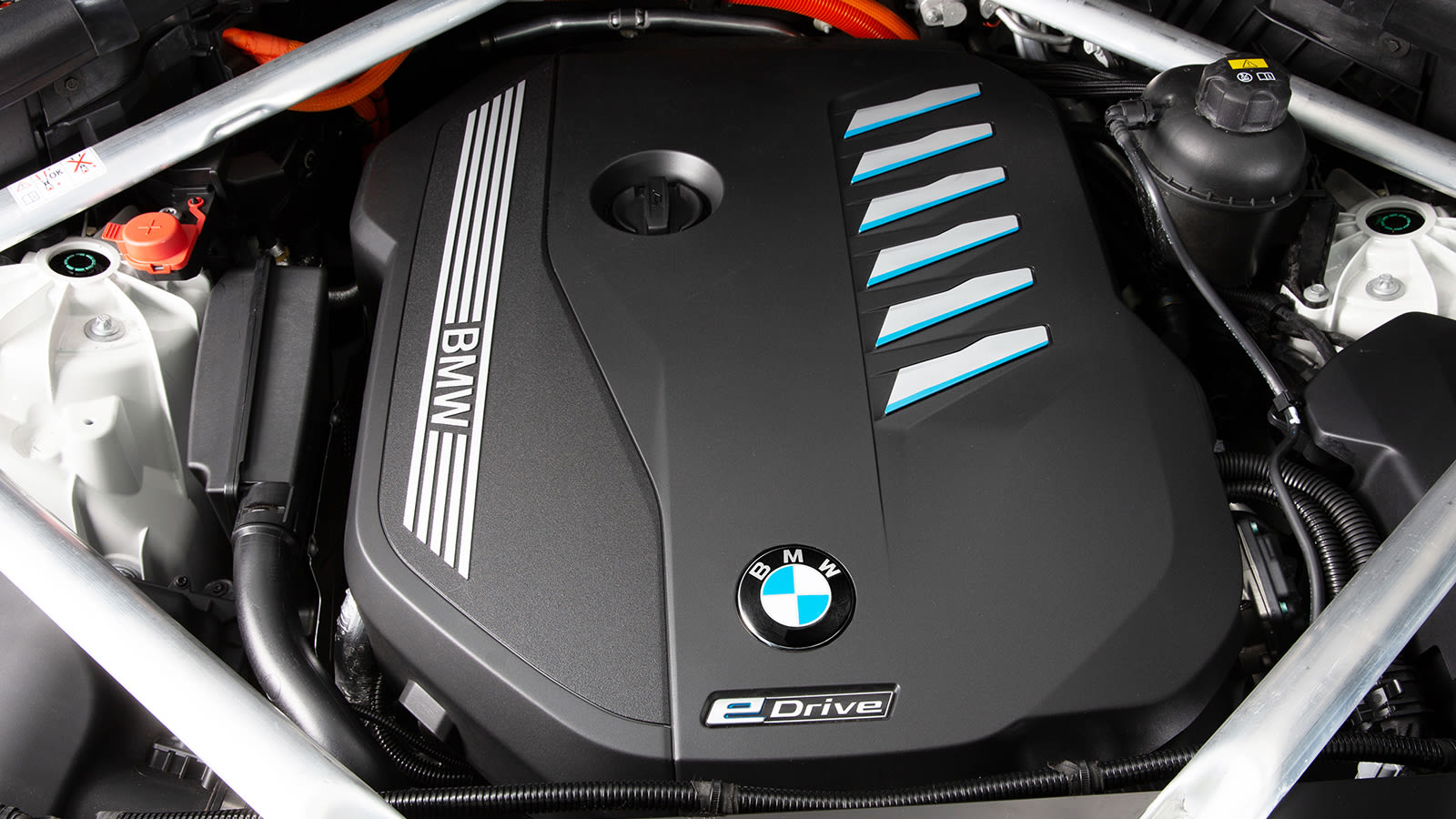 As is typical for BMWs, the powertrain is generally excellent, which is a big benefit for it as a hybrid. It’s nearly imperceptible when the engine kicks on because of how smooth and quiet it is. No matter how hard you drive it, you won’t hear anything more than a muted and sophisticated growl. You’ll be tempted to drive it hard, too, since this X5 launches with authority thanks to the instantly available electric torque, although the throttle is slightly jumpy. There’s plenty of power through most of the power band, and the transmission is one of the quickest and smoothest on the market. It’s even fun to shift it manually.

As in other BMWs, there are specific drive modes including Sport, Hybrid and Electric. The Sport mode offers the most aggressive throttle settings and prioritizes power over efficiency. The hybrid modes shift that priority to efficiency and comfort, and either works great depending on whether you’re feeling frisky or frugal.

As for the electric mode, it’s unsurprisingly the smoothest and quietest mode. And around town, it feels spunky, but it doesn’t take long to realize that you’re not working with much power. It’s especially evident if you’re trying to get up an on-ramp on electric power alone, where you’ll be foot to the floor the entire time (unlike other plug-in hybrids, when in full EV mode, the engine will not jump in to lend a helping hand). The BMW is capable of achieving highway speeds under electric power alone. In fact, the top speed in EV mode has increased from 75 mph to 84. Once at speed, it cruises easily and feels responsive enough for merging and relaxed passing. The mode is only available as long as there’s enough charge, after which point the car will automatically swtich to hybrid mode. There are also options to begin charging the battery while the gas engine is on, or to preserve the charge to use later, for instance, if you’re going to be driving around town at the end of a long highway drive. There’s even the ability to select how much charge you want to hold or add back while driving. 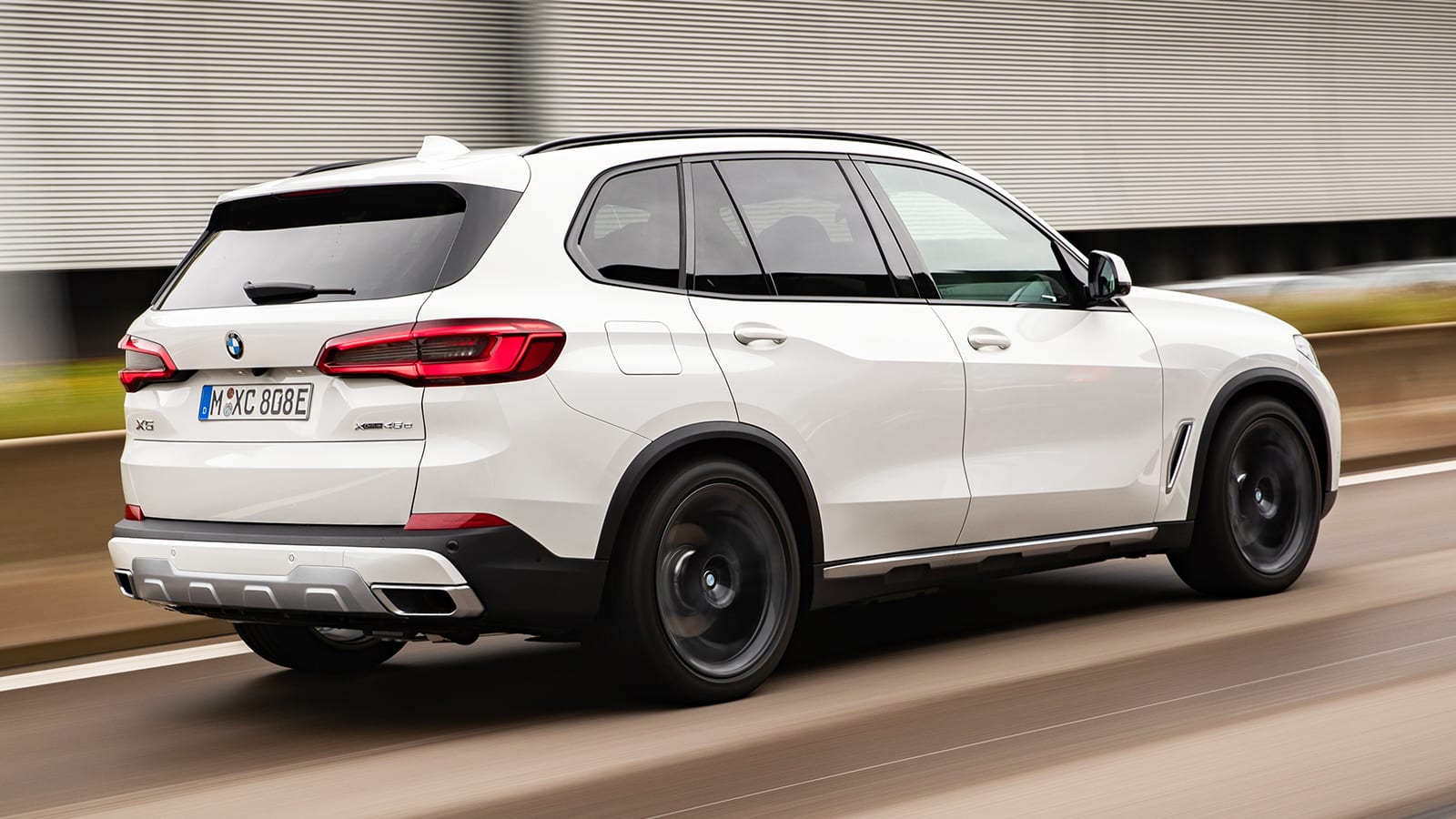 So, the hybrid powertrain on the X5 PHEV is better than ever and beats all rivals when it comes to electric range. But the rest of the driving experience is a bit of a letdown.

The X5 PHEV comes standard with an air suspension, and in its default mode, it’s mighty sloshy. The body heaves in big, slow motions over bumps, and it takes forever for it to settle back down. Switching to the Sport mode firms things up, so you feel the initial impact of bumps more, but the body control is much improved. Not surprisingly, handling isn’t an especially strong area for the BMW either, with significant body roll in the regular hybrid mode. It’s less prevalent in the Sport mode, but you can feel that the X5 is really heavy and not the most willing to corner. The steering is accurate and reasonably quick, but as numb as most other BMWs.

The interior works better than the chassis, thankfully. It’s not particularly inspired from a design perspective, but the materials feel great from the soft leather to the real aluminum or wood trim, depending on how your car is specified. Every piece is fitted tightly with great solidity. Our particular model also featured some flashy optional show pieces you don’t find many other places such as the glass shifter and starter button, and the LED-lit sunroof, which matches the car’s ambient lighting. But even a standard X5 will have nice materials, and it comes standard with dual 12.3-inch screens for instruments and infotainment. They’re bright, crisp and responsive, and they’re controlled via touch, the control wheel, or optionally with gestures. The menus can be deep and require a bit of digging, but at least you’re not waiting on loading or input recognition. Navigation, Apple CarPlay and Android Auto are all standard along with safety features including lane-departure warning, automatic emergency braking, blind-spot monitoring and rear cross-traffic alert. Items such as adaptive cruise control with steering assist and stop-and-go assist, a head-up display and wireless phone charging are options. 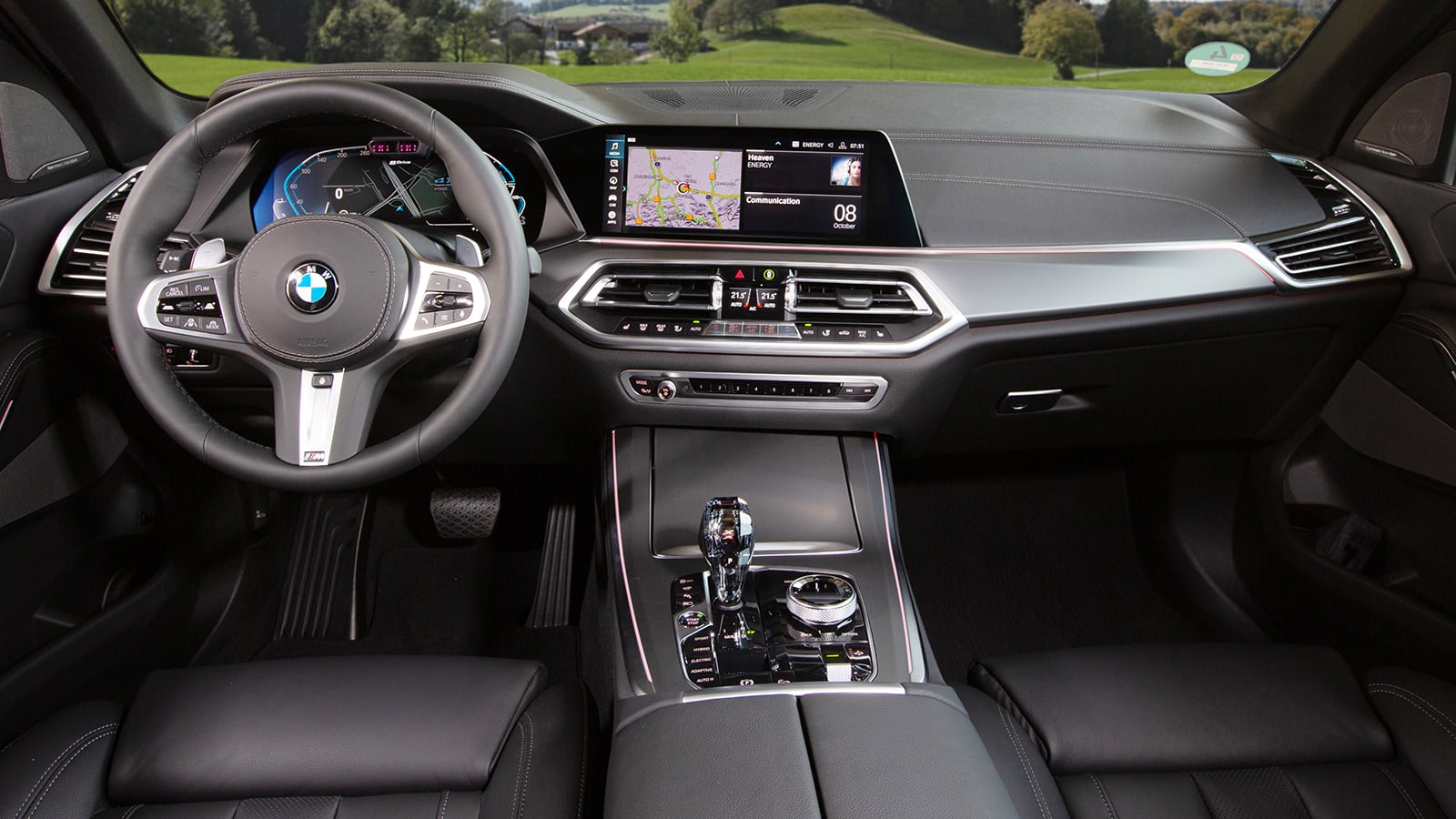 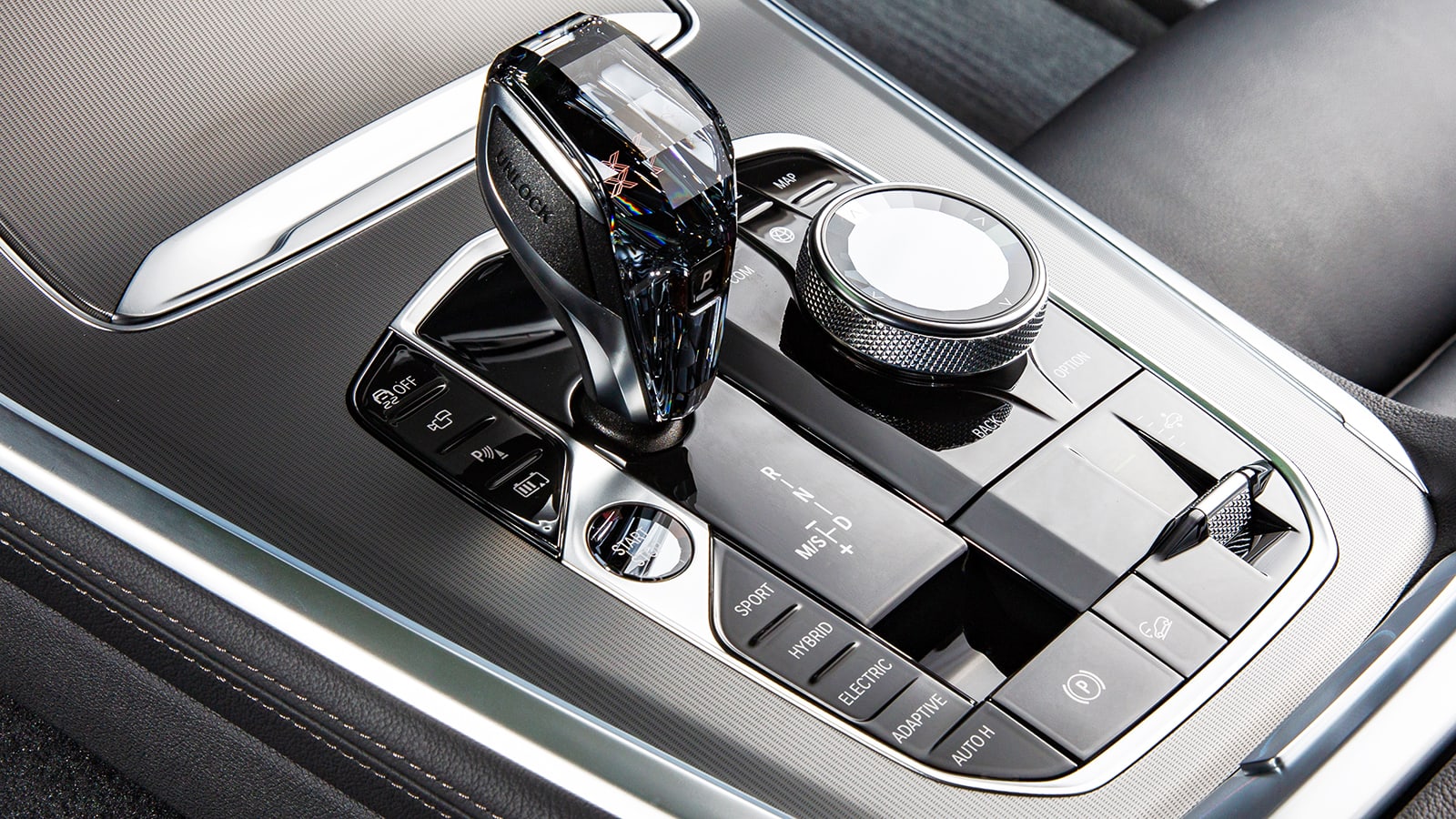 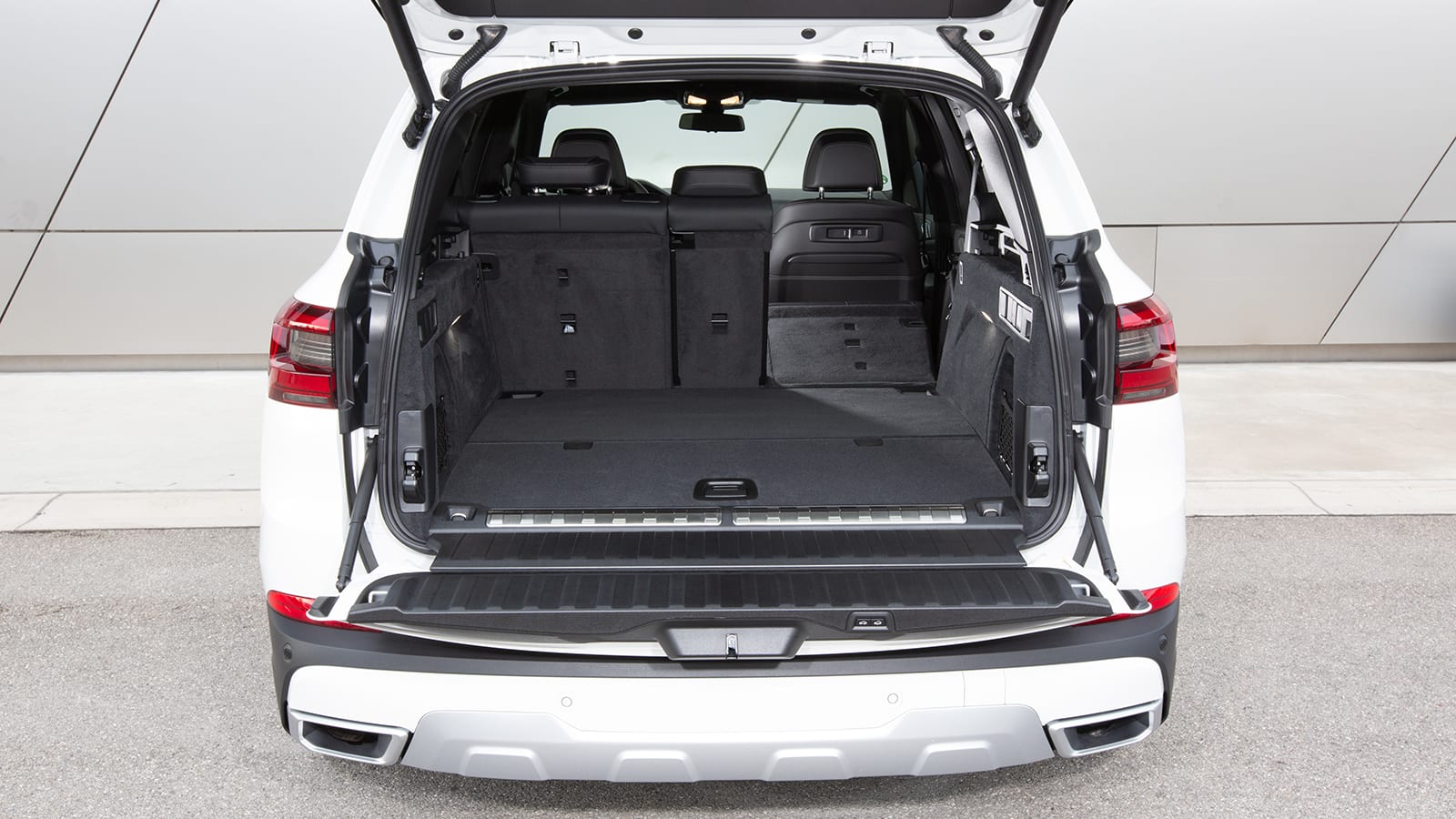 It’s a pretty roomy place, too. Front occupants will have loads of space in every direction to stretch out and get comfortable thanks to the supportive, highly adjustable seats. The rear seats are less appealing. Space is OK, with adequate legroom and excellent head- and hip room, but the seats themselves are unimpressive. A bit flat and lacking adjustment, they also sit a bit low, so the long legged will find their knees sitting a little high. Unlike the Lincoln and the Volvo that offer an adult-friendly third-row of seats, the X5 doesn’t offer one at all. Not surprisingly, BMW has less space behind its back seat at 33.1 cubic-feet versus the Volvo at 34.1 and Lincoln at 41.8. At least it tops the Porsche’s 27.2, though there are reasons to suspect the BMW’s figure may be inflated and the Porsche’s too small.

The BMW X5 PHEV may not be the most stylish or fun to drive luxury crossover, but it can represent a superb value not just against its competitors, but even its less well-equipped siblings. Add in its great electric range and a plenty posh experience, and it’s a very compelling product well worth your consideration, even if you weren’t thinking of getting a hybrid.