Ford tells 30,000 employees they can continue working from home

Save some green on this OBD2 scanner this St. Patty's Day

The 2021 BMW M550i is the stepping stone to an M5, and yet in many ways, it’s the more enjoyable sports sedan to drive. BMW updated the 5 Series lineup for 2021 — we sampled the 540i first — adding more tech and revised exterior styling among other refinements. The M550i takes advantage of these changes and makes a case for itself as the 5 Series to get.

The M550i is a long and low sedan that is seemingly designed with restraint and class in mind. Unlike many other new BMWs, the 5 retains its classy and subdued classic kidney grille nose, making it one of the best-looking cars in the brand’s lineup. The M550i M Sport variant adds a touch of aggression with grey accents, an aero kit with a subtle trunk lid spoiler, modified front intake trim and dual trapezoidal exhaust outlets. My tester’s optional 20-inch wheels (19-inch wheels are standard) complete the package beautifully. I find it dashing in Aventurin Red Metallic, a deep red that verges on purple in certain lighting situations. This fashionable BMW is one I’d want to be seen in at the hotel valet, unlike some others.

Styling isn’t what makes it more desirable than an M5, though. No, what makes the M550i so attractive is how balanced and livable it is while still offering M-like performance. The beast under the hood is BMW’s 4.4-liter twin-turbo V8, which is essentially a slightly de-tuned version of the M5 engine. Output in M550i guise is 523 horsepower and 553 pound-feet of torque, meaning it’s down just 77 horsepower compared to the M5, while torque is the same. The M5’s version of this engine has the edge at the top end, but the massive smack of torque and mid-range hits similarly.

The 0-60 mph time of 3.6 seconds trails the M5’s 3.2-second run, but that seems mostly the fault of a lackluster Launch Control program that likes to gently ease off the line for a split second before shoving you in the back. Acceleration is relentless and doesn’t have any let-up at street-legal speeds. With the available Michelin Pilot Super summer tires, top speed is limited to 155 mph, but is limited even lower to 130 mph with all-seasons.

BMW’s eight-speed automatic transmission is quick and smart, just like the same transmission in the M5. It’s velvety smooth when you want it to be, but exhibits swift reflexes in Sport Plus mode. Upshifts and downshifts come with very little delay from the paddle shifters — if only the paddles themselves were better than these hard-to-reach, cheap-feeling plasticky things.

I’ll take points away from the M550i for its exclusively all-wheel-drive drivetrain. You can disconnect the front axle in the M5, but the M550i will always be all-wheel drive. That doesn’t prevent you from doing big drifts in the snow with all the systems turned off, though. It just makes the car feel more buttoned-up on the road.

This BMW’s 4,275-pound curb weight (just 385 pounds more than the new M3 Competition) is deeply masked when you chuck it down a twisty road. M-tuned electrically-controlled adaptive dampers are standard on the M550i, but my test car also had the $3,600 Dynamic Handling Package that gives the car a lower ride height, Active Roll Stabilization that reduces lean in corners, and Integral Active Steering that adjusts steering speed/effort depending on the situation. The steering still has the detached-from-the-road feeling that most BMWs do these days, but it’s genuinely accurate and precise. I only wish the steering wheel itself were thinner and could be dropped further down into my lap. As it is now, I (a male of average height) have to move the seat way too far up to be in a natural driving position. 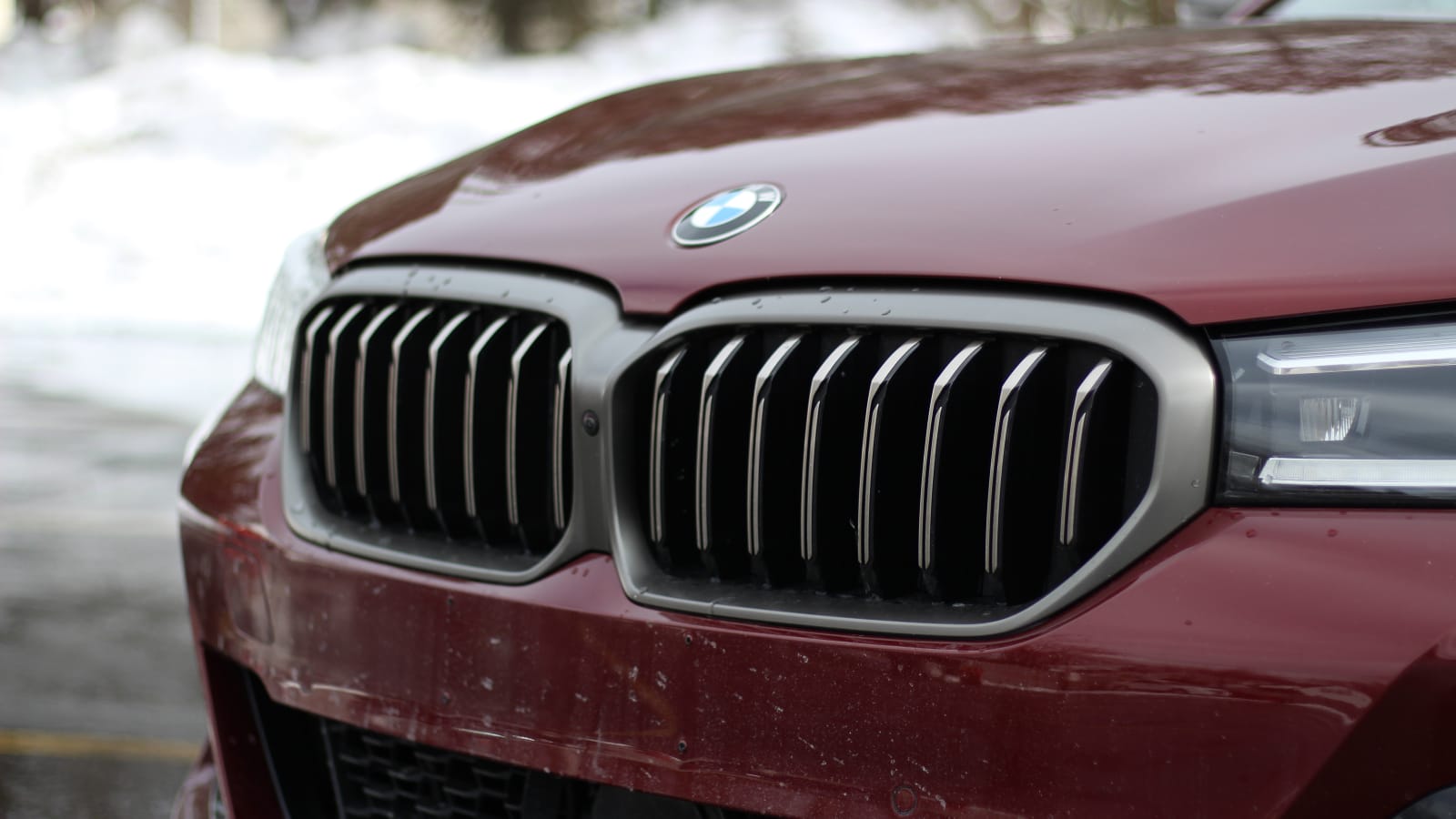 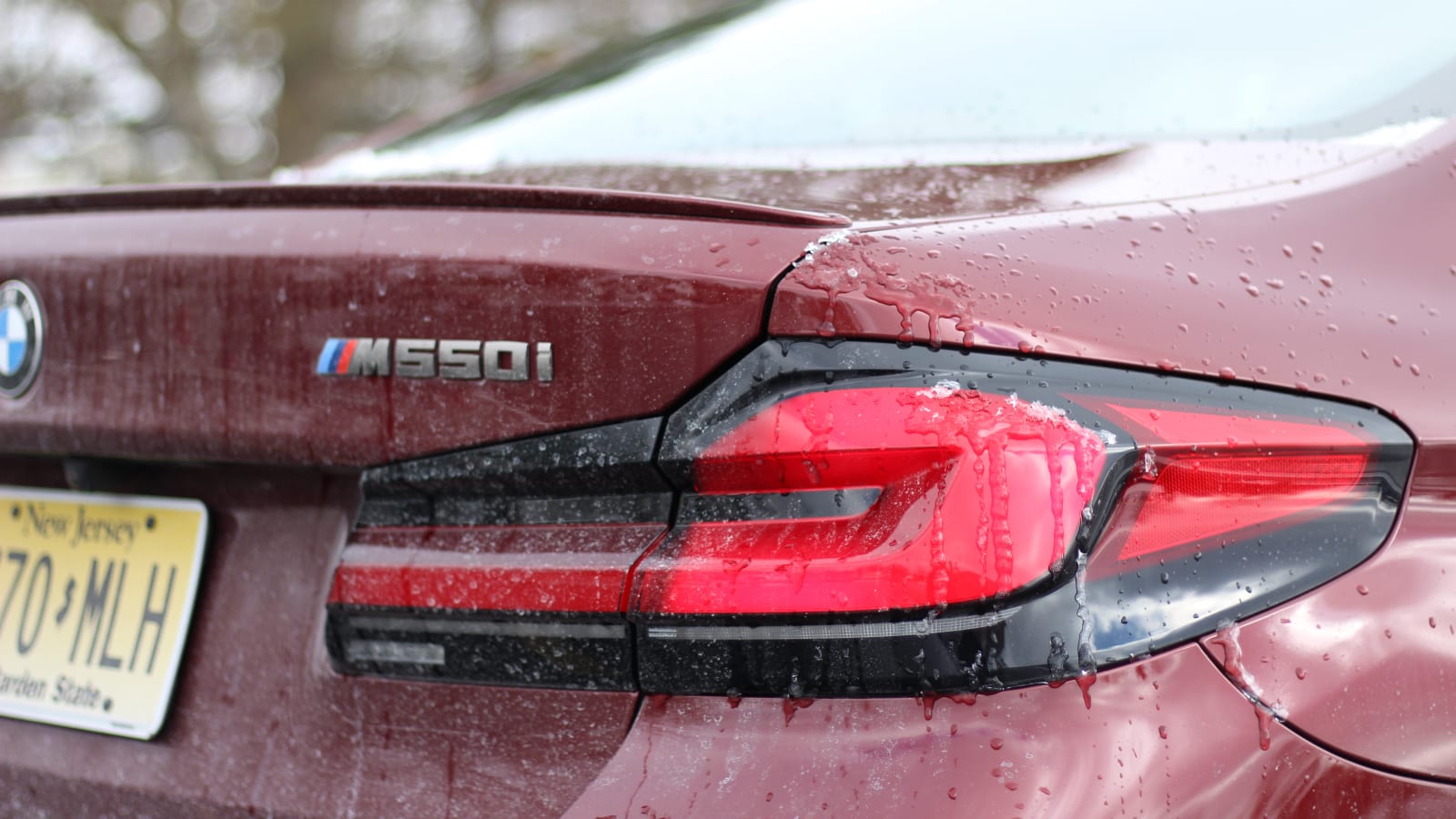 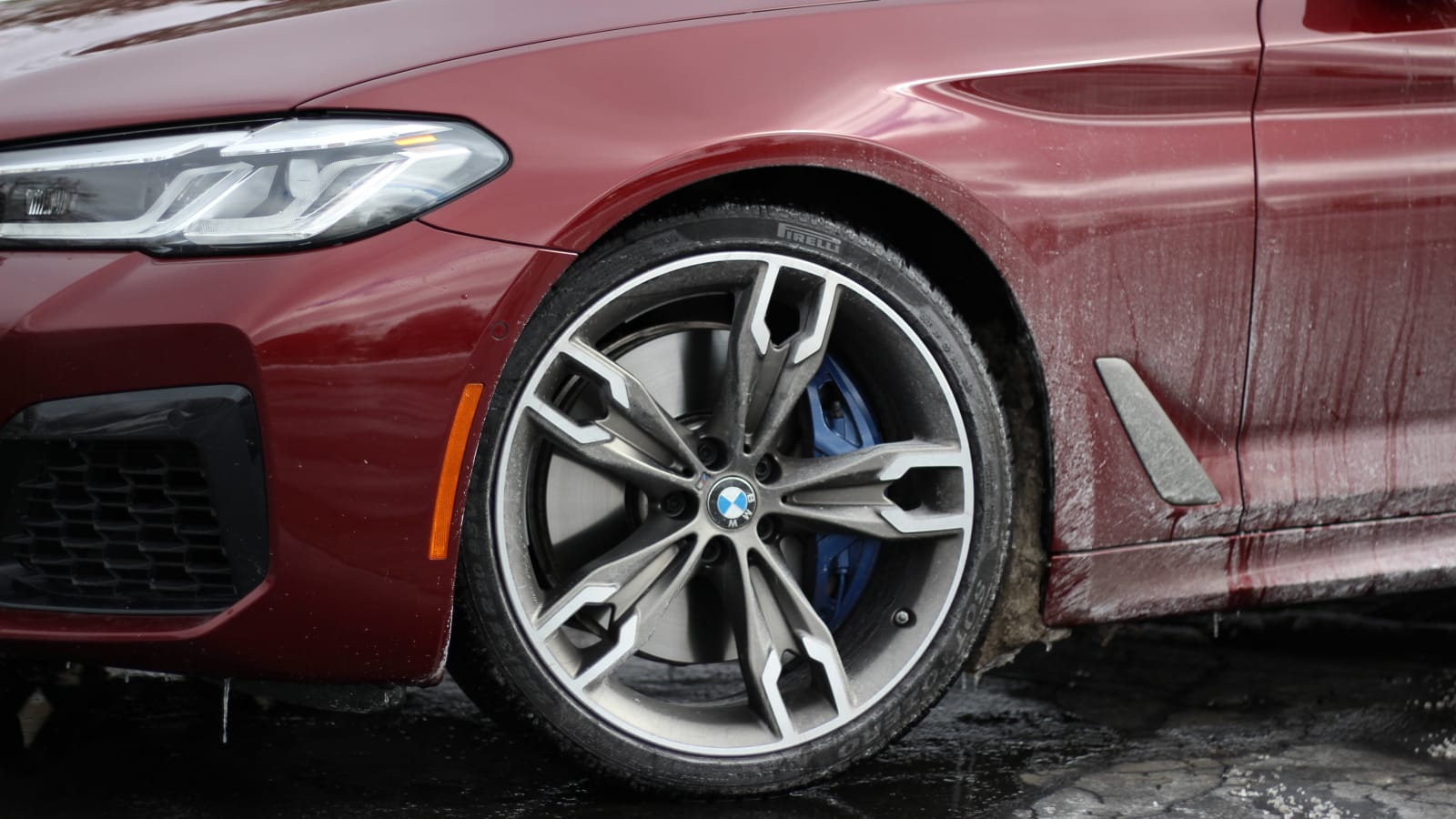 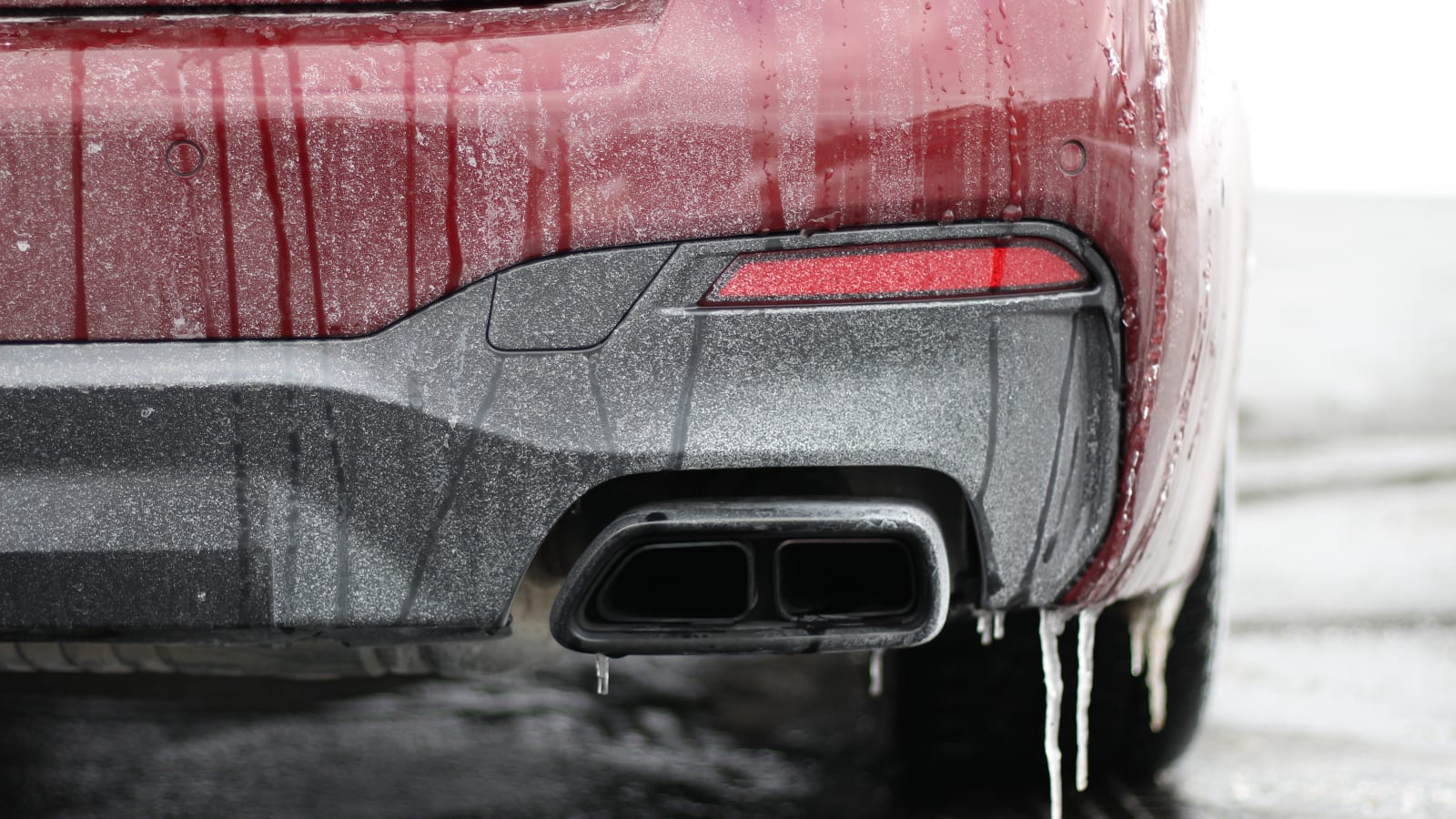 With the car in its tautest settings — Sport Plus everything — it transforms from a boat-like cruiser into a big, agile sports sedan. Body motions are quelled nicely, with help from the active roll control. BMW’s Active Differential on the rear axle does a bang-up job of distributing torque across the wheels to dig you out of corners with assured grip and a little rear action to remind you of its excessive power. It’s no hoon-mobile like an M5 can be, but you can only really exercise the M5 with smoky slides round a racetrack.

Reaching for the limits of the M550i is a treat, and they feel within your grasp. The car will still shoot between bends with relentless thrust, but it’s not supercar-quick like the M5 and M5 Competition. There’s a little bit of give in the suspension, not enough to make it feel uncontrolled, but enough to let you get in a rhythm of the car moving and transitioning through consecutive corners. The M5 and other full-M vehicles are so stiff even in their Comfort settings that this sensation of ebbing and flowing with the road goes away. They’re technically brilliant, but they leave me cold where this M550i keeps me entertained, involved and in-tune with how the car is reacting.

The benefit of dialing in some forgiveness to the chassis is an improved ride over less pleasant surfaces, too. Put the M550i in Comfort mode, and it adopts a cushy ride. It glides over bigger bumps and dispatches long stretches of highway with ease. Where the relaxed character strangely doesn’t help is with smaller road imperfections. Minor disturbances are transmitted in a nagging manner over certain road surfaces that aren’t perfectly smooth. It’s a weird combination, as the suspension tunes out big heaves and potholes, but the dampers don’t smooth out rough road surfaces. I’m told this isn’t exclusive to the M550i – West Coast Editor James Riswick reports that a 530e with the M Sport package exhibited the same behavior. We like that constant connection to what’s happening at the tires for enthusiastic driving, but the poking and prodding from little imperfections in the road gets annoying when you just want to take it easy. Regardless, this car rides significantly better than an M5, and is the one I’d rather use on a long road trip. 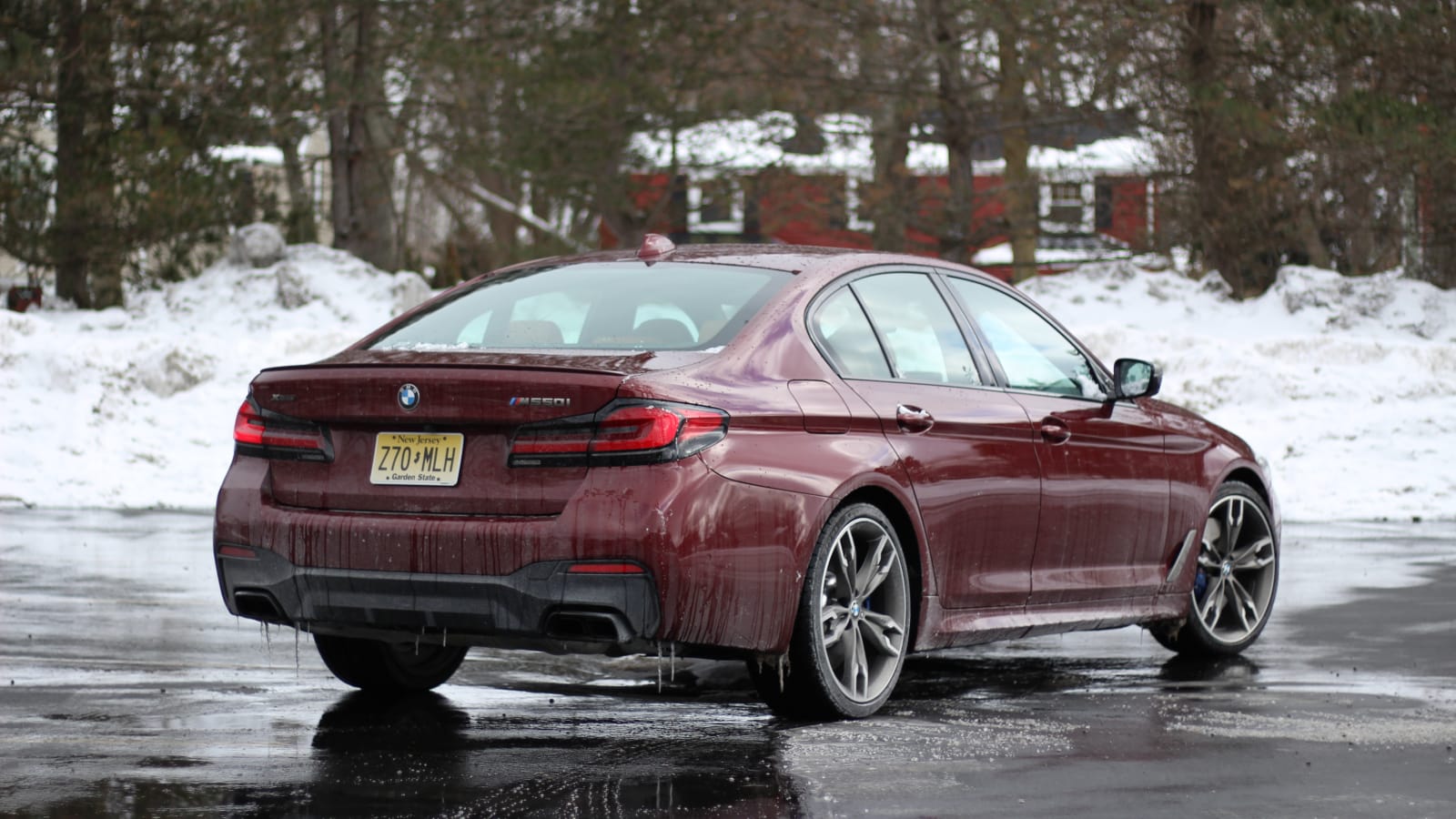 BMW did well in finding the right compromise of engine and exhaust noise. The V8 has a deep rumble under mild acceleration that ensures you never forget its presence. At the same time, the sound is quiet to non-existent on the highway. The monster that is let loose in Sport Plus and full throttle isn’t too monstrous from the cabin. That V8 growl is at a higher volume and rings louder than in regular driving, but it’s never obnoxious. BMW saves the extra volume for the M5, whereas the M550i’s theatrics start and end with some subtle burbling and popping on the overrun.

The M550i’s two German competitors are a couple cylinders down — the Mercedes-AMG E 53 and the Audi S6 both have boosted six-cylinders under hood. The E 53 is the worthiest adversary with its sweet-singing inline-six, though it’s way down on power and speed while only being $3,000 cheaper to start. This gap can be quickly closed with options — my tester started at $77,795 but ended at $93,735. The $1,700 Driver Assistance package is a must for its excellent adaptive cruise control with lane-centering, but you can skip the $3,400 Bowers & Wilkins audio and $2,150 Executive Package.

When you add it all up, the M550i is the better-executed 5 Series car that wears an M badge, a sneaky pick for best mid-size German performance sedan. It talks to the driver where the M5 doesn’t. The V8’s acceleration is usable outside of a drag strip (to a degree) without having to worry for your license in the daily commute. And it’s a great deal cheaper than an M5 to boot. This BMW is truly one of the best recent efforts and fullest executions of a sports sedan we’ve seen from the company’s performance division. That it has a “50i” after “M5” in its name doesn’t really matter.