The Suzuki Misano is a concept car inspired by motorcycles

Nissan's 370Z is sold-out across the United States

Apologies, to BMW and anyone I may have misled in my recent 2021 BMW M550i Road Test. I was wrong when I suggested it was the best executed 5 Series with an M badge. That honor lies where it rightfully belongs, with this M5 Competition.

I made the classic mistake of getting out ahead of oneself, assuming that the refreshed M5 Competition would suffer from the same issues that plagued the pre-refresh car. And the X5 M Competition I drove last summer. And the X6 M Competition I drove in the fall. They’re all just too damn stiff and serious for their own good. Great for a racetrack, but endlessly annoying in the vast majority of circumstances.

I feel as much an old man for typing that as you likely think of me reading it, but it’s true. The M550i felt like the perfectly balanced success story I’d been searching for in BMW’s iconic midsize sedan: wicked quickly, an adept handler, silken smooth on the highway. That’s checking a lot of boxes, and while it’s still a spectacular sports-sedan effort, the M5 Competition is in every way the M sedan to get.

How the M5 Competition got there is rather simple. The car has completely new adaptive dampers and a recalibrated control system this year. BMW says the new parts and revised tuning are meant to “enhance ride comfort during high-speed highway driving as well as over bumps.” These new dampers succeed with flying colors at those tasks, making the M5 Competition a sedan anybody could live with on a day-to-day basis without the need for spine realignment later in life. But don’t think the M5 has gone soft. Switch the car into full Sport Plus mode with the dampers at maximum stiffness, and the vicious tiger within is still very much alive.

This duality of excellence is what a car like the M5 is all about, and it’s one of the reasons why the model is an enthusiast icon to this day. Industry-leading steering feel and a third pedal are no longer part of the equation, but this new M5’s chassis is in one way a return to the car’s well-known glory as a do-it-all vehicle for the well-off enthusiast who wants a single car for every circumstance.

Besides the chassis changes, BMW updated the M5 this year with a number of enhancements applied across the 5 Series range as part of its mid-cycle update. There are some difficult-to-discern styling changes to the front and rear bumpers, enhanced interior tech with dual 12.3-inch screens (one for the instruments, the other for infotainment), Android Auto, a new “Track” program to play on the screens and new colors galore. The one you’re looking at here isn’t new, but it’s a highly recommended Voodoo Blue option from the BMW Individual Manufaktur program.

There were plenty of bits on the M5 that didn’t require improvement, and BMW made sure to carry those over. Namely, the 4.4-liter twin-turbo V8 is still a total animal. It produces 617 horsepower and 553 pound-feet of torque in Competition spec (just 600 horsepower in standard M5 guise), which is good for 0–60 mph in 3.1 seconds, one-tenth quicker than the standard car. The Competition breathes through an extra-loud exhaust system (seriously, it can’t be much quieter than a Hellcat) that you’ll fall in love with as quickly as your neighbors will begin to hate you. Any conversation near the big quad pipes on a cold start will require all parties involved to yell back and forth. It’s fantastic! There’s a $7,240 titanium exhaust option available via BMW’s M division, though it’s likely overkill on overkill. 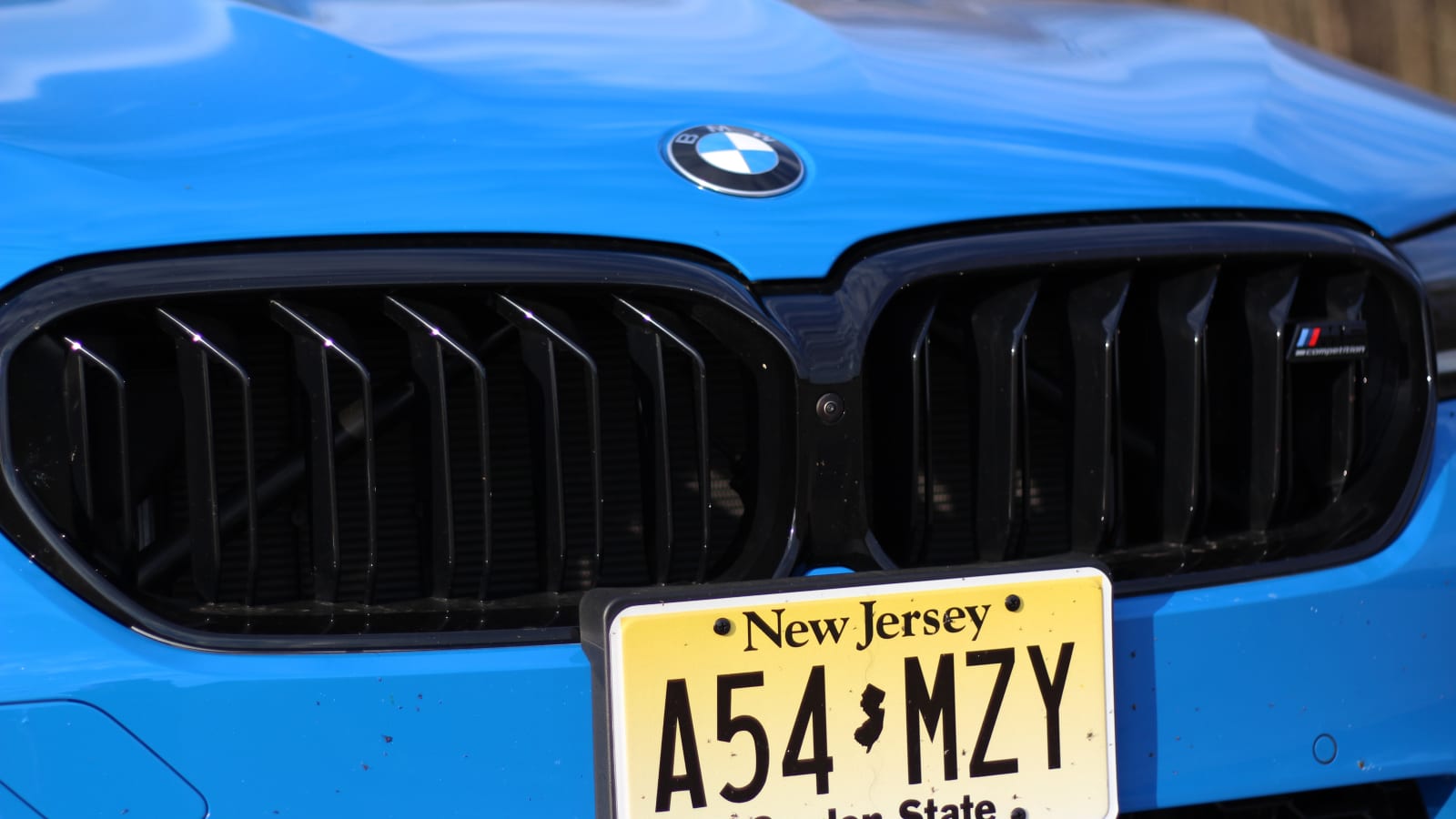 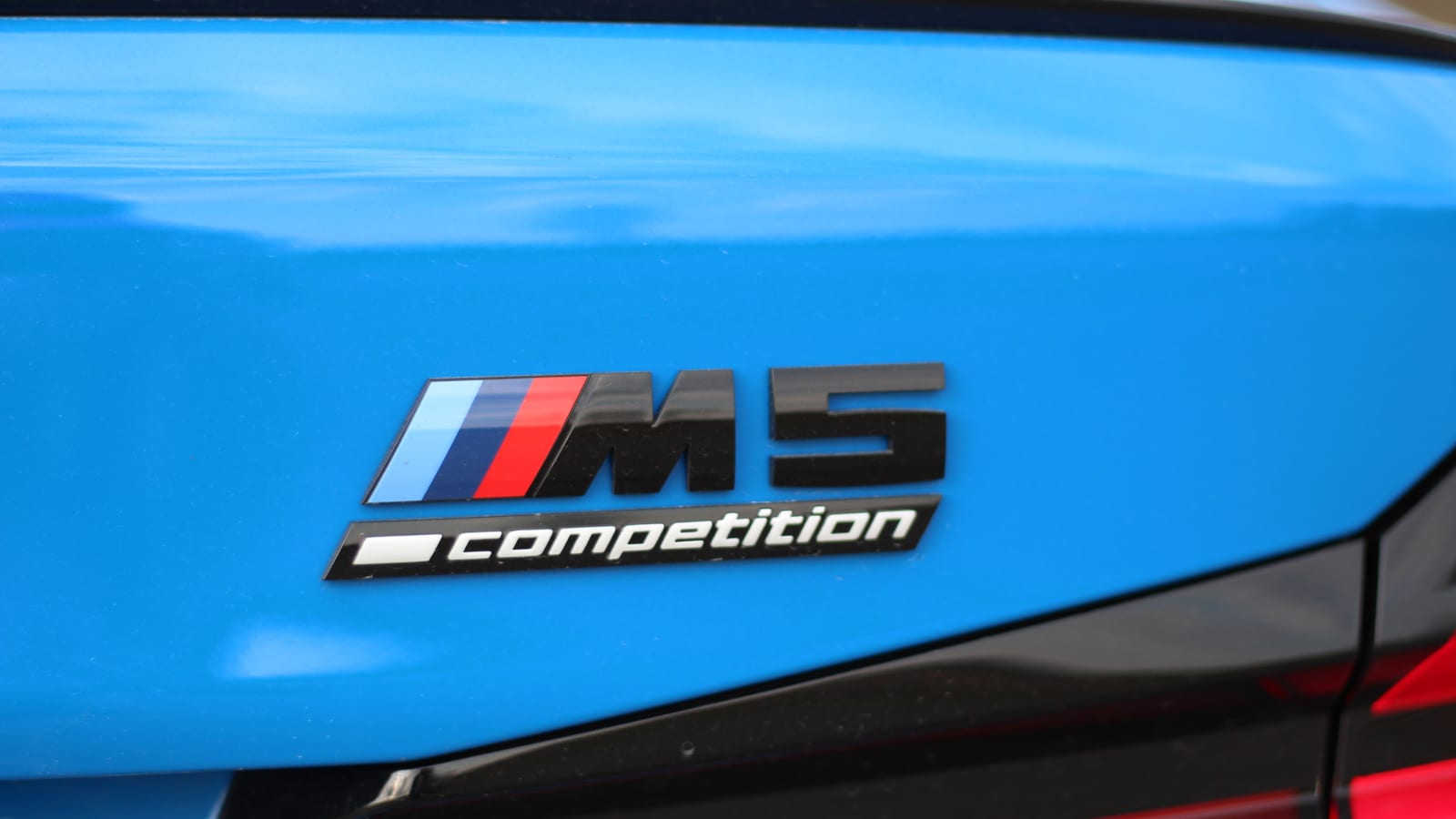 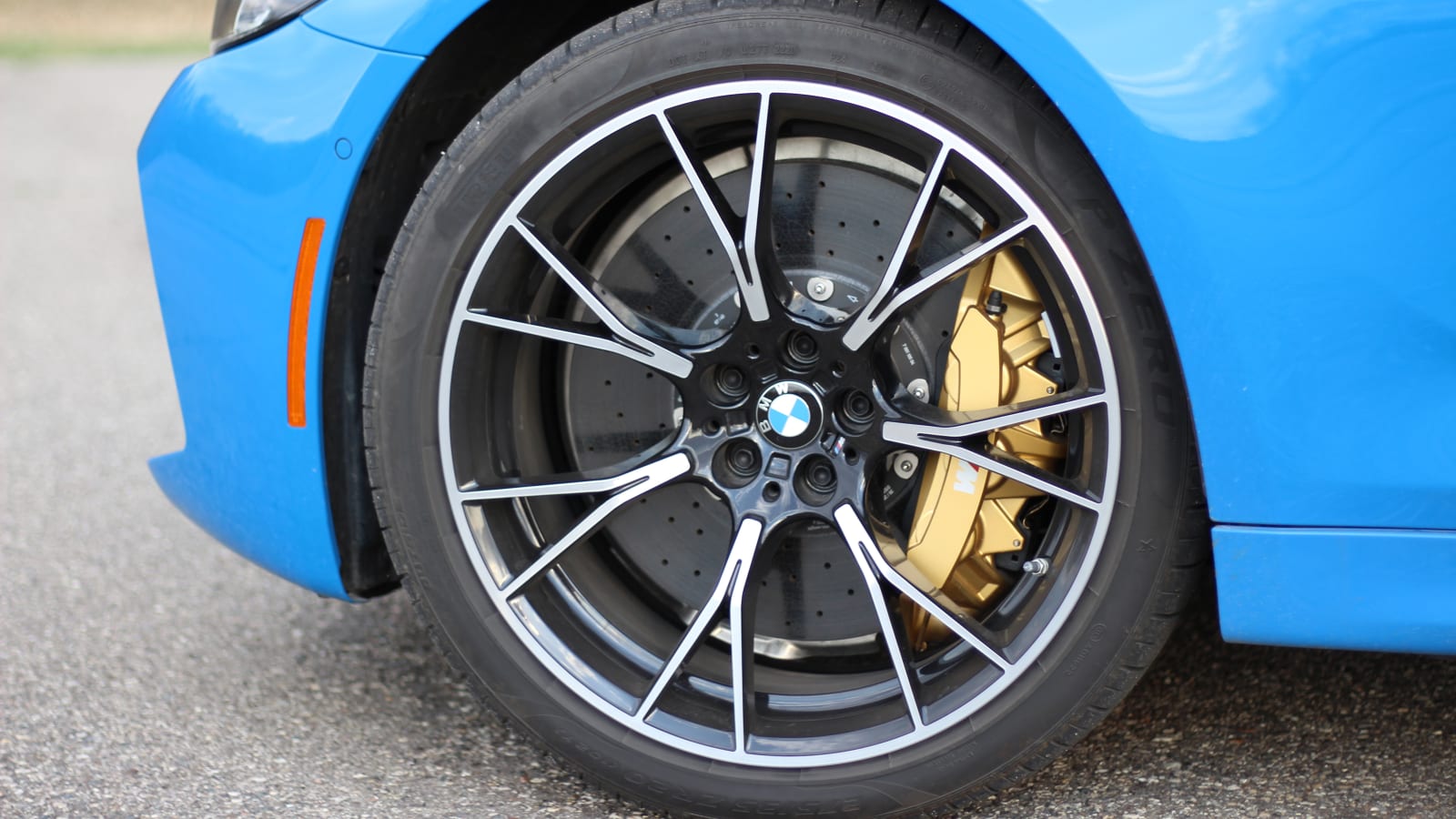 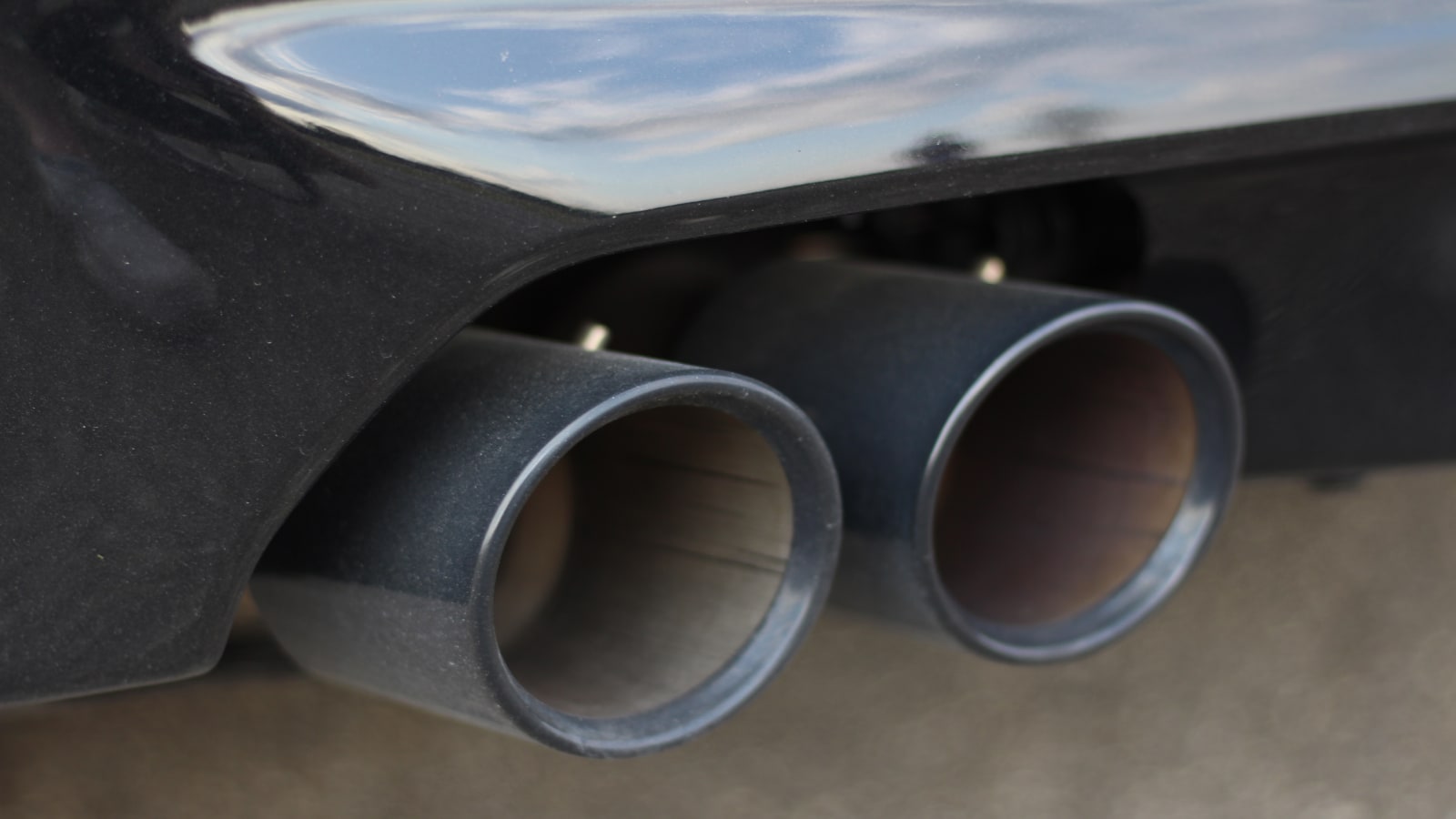 The Competition’s suspension setup continues to be more serious than the standard M5. It sits 0.2 inch lower, has 10% firmer front and rear springs, a firmer rear anti-roll bar, increased front negative camber and toe-link ball joint mounts instead of rubber bushings. It also gets 20-inch forged wheels with 275-section-width summer rubber in front and 285-section-width tires in back. This makes the observed ride quality improvement even more impressive.

You’ll be able to tell the Competition apart from the standard M5 by its extended use of glossy black trim. All of the following are painted black: kidney grille surrounds, side mesh inserts, mirror caps, trunk spoiler, badging, rear bumper inserts, and the exhaust tips. On the inside, the package adds M Sport seats, Merino leather-covered surfaces, M-striped seatbelts and a light-up M logo in the headrests. All of the above is an extra $7,600 over the standard M5.

It’s worth it if you plan on using the M5 as it’s meant to be used. And use it you should. This car is a 4,295-pound missile (when equipped with the carbon ceramic brakes as our tester was). Compared to a new M3 with its newly-available all-wheel-drive system, this M5 Competition is only 305 pounds heavier. That’s more a tsk-tsk to the M3 than it is an atta boy to the M5, but it helps bring this big sedan into perspective.

Using the launch control system, acceleration is brisk, to put it lightly. This engine smacks right into its giant wall of peak torque at 1,800 rpm, then carries it onward to 5,860 rpm. The M550i might be quick, but that brilliant engine is simply overshadowed by the quick-revving, hardcore version found in this M5 — the M550i’s engine loses peak torque output 1,000 rpm sooner than the M5’s, making the M5’s version feel like more of a high-strung performance engine. BMW continues to prove its expertise in creating some of the world’s best engines, and the M version of this V8 is among the best of the best. Throttle response is as good as it gets for a boosted motor, and it pulls without petering out all the way up to the impressive 7,200-rpm redline. 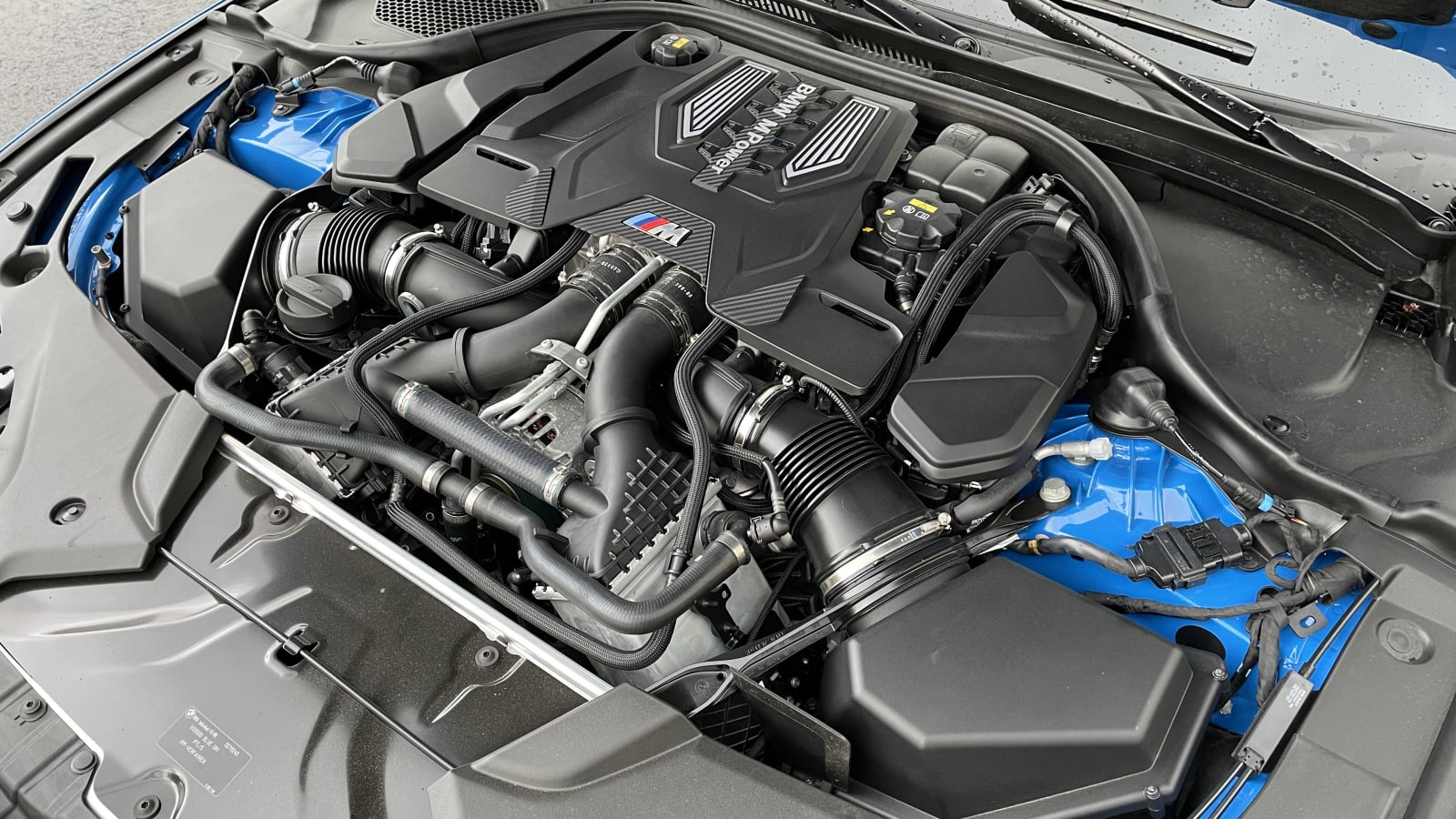 Adding all-wheel drive to the mix with this M5 generation was and still is a splendid idea. While it’s a total hoon-mobile in rear-drive-only mode (trust me, you’ll instantly turn into a child when you lock power to the rear of this car), you’ll want all-wheel drive to fully harness what the M5 is capable of. Powering through and out of a corner is just silly fun. You can sense the Active Differential adeptly sorting out torque distribution in the back and the fronts clawing the car out the other side. But don’t worry, there’s still more than enough power left to send the car into an easy slide, assuming you’re in BMW’s expertly tuned 4WD Sport mode that loosens the nannies without completely turning them off. BMW dials in this “relaxed traction control” mode as well as, if not better than, anybody else. In this case, it allows you to feel like a hero but cuts in before that twitching of the rear becomes a 360. Do beware RWD mode, though. There’s no BMW hero waiting to catch your 617-horsepower confidence from drifting into a telephone pole.

The softened dampers that make highway cruising and rough road riding so much more acceptable this year don’t seem to hurt handling. However, this is one of the rare BMWs that requires dialing up the damper stiffness into Sport or Sport Plus mode to get the most out of it. Comfort mode truly is comfort in the M5 now, and at this car’s size and weight, the lack of an edge is amplified. When turned up to maximum attack, the M5 grips tenaciously in corners with its summer rubber. The limits are clearly high enough that a racetrack is necessary to fully explore what this car is truly capable of.

Only two glaring downsides make themselves evident. First up: the brakes. While the gigantic carbon ceramics ($8,500 extra) will tug this car down from speed in a hurry, brake pedal feel is just horrible. It’s mushy when first stepping into the brakes, and never properly firms up or provides useful feedback. They feel like they were tuned for casual city driving where you want an easy-to-modulate, softer pedal. Even after a week of driving, it was still difficult to judge the brakes properly when braking into corners. And unlike many other BMWs with adjustable brakes (thanks to brake-by-wire technology), the M5 simply is what it is with no modes to fettle with. The second issue is steering feel or the lack thereof, which is just the lowest hanging fruit in any list of BMW complaints these days. It weights up naturally in corners, and the non-run-flat tires help make this BMW’s steering better than many of the run-flat-equipped cars of the past, but BMW is still behind Mercedes-AMG when it comes to feeling connected to the road through the wheel. 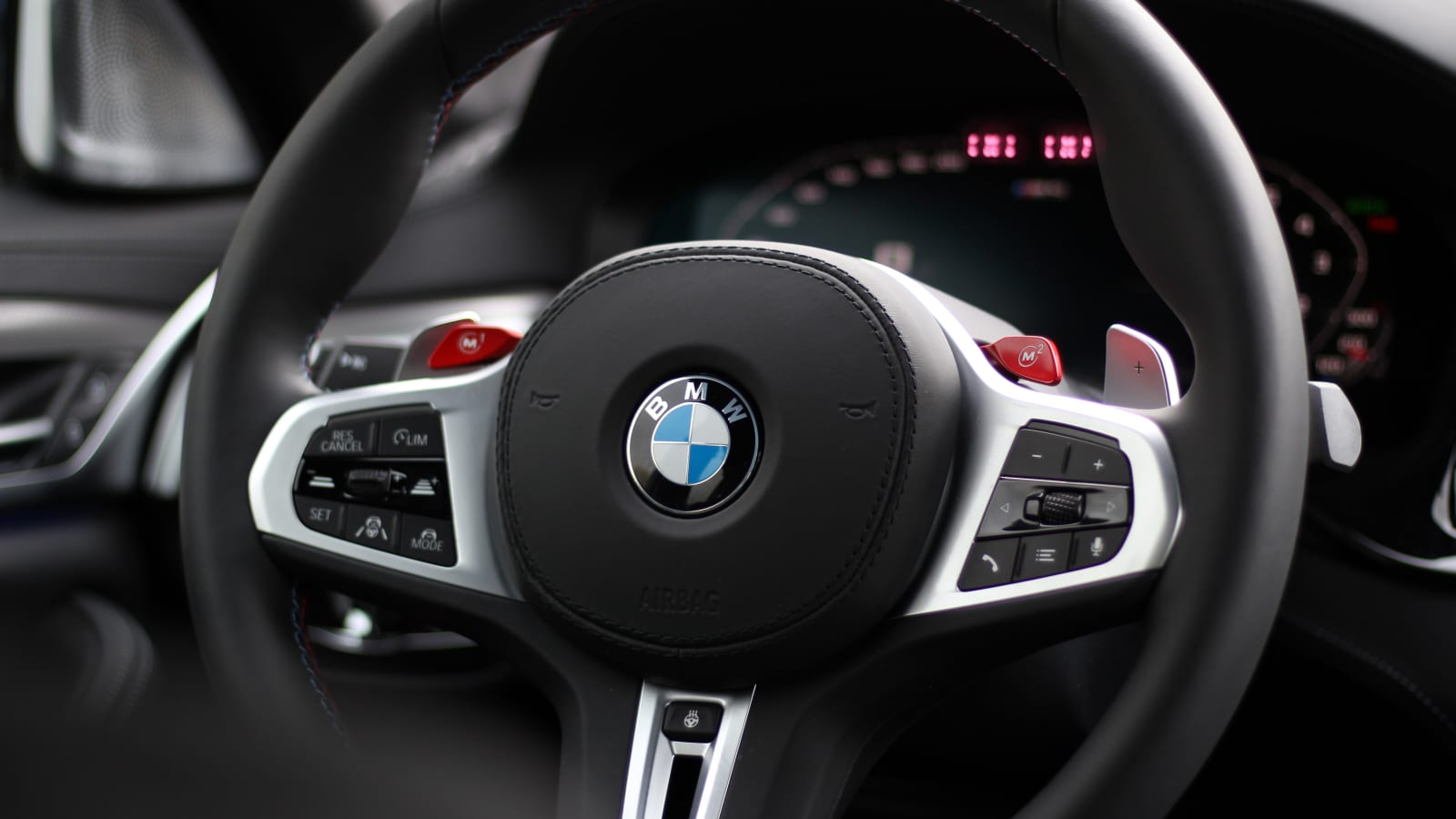 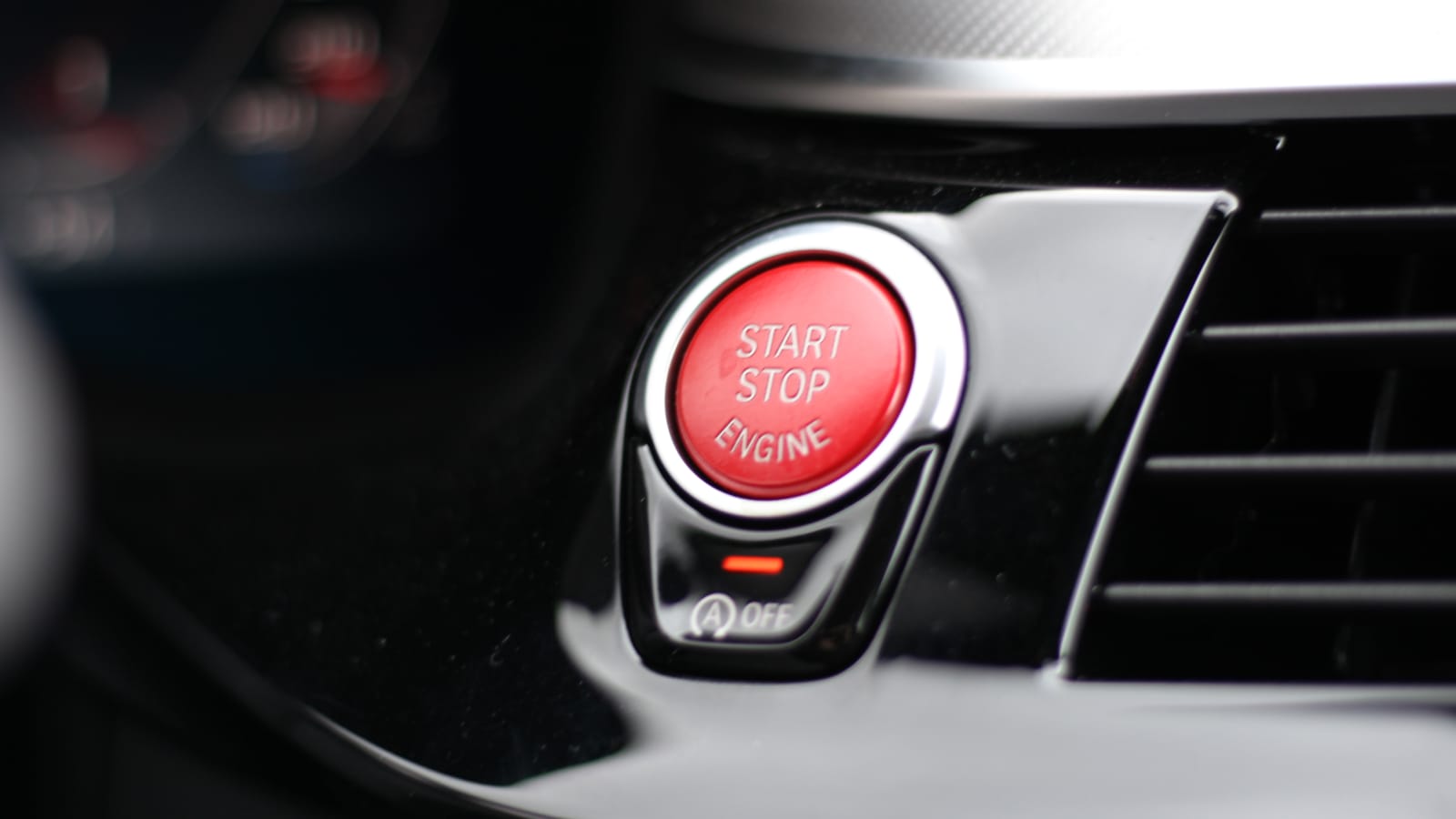 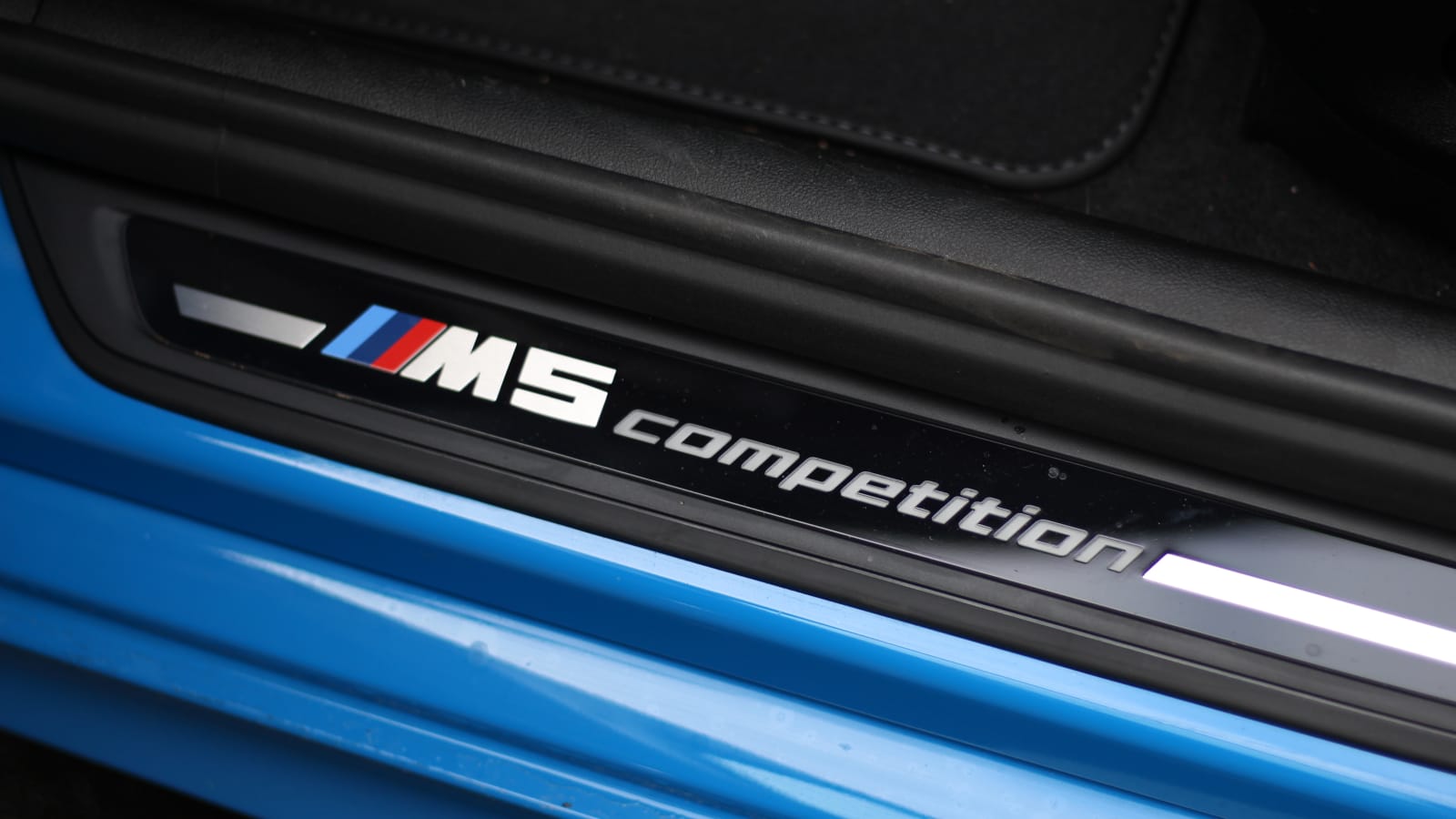 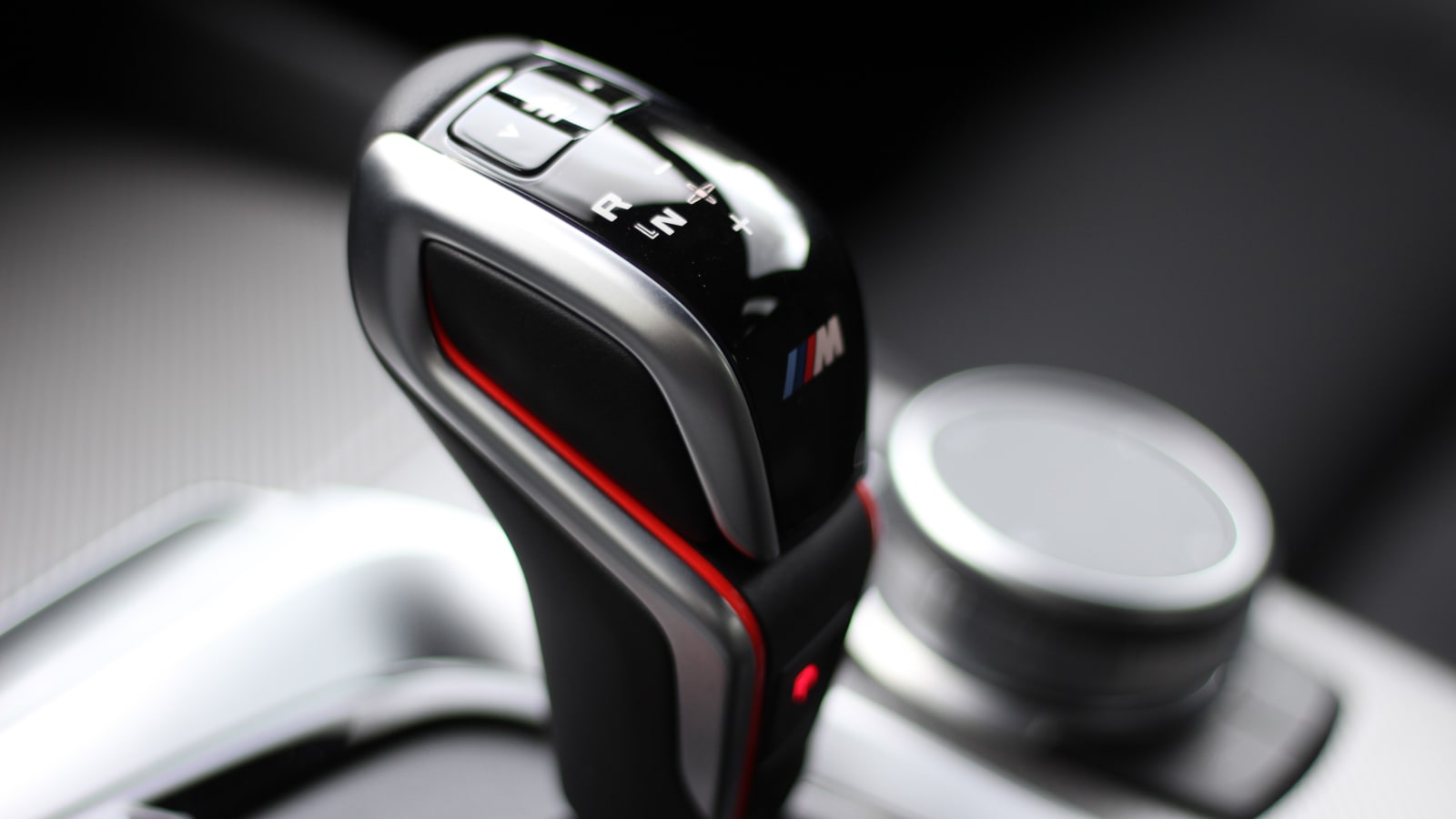 And that’s where this BMW falls in the hierarchy of mega-powerful German luxury cars, behind the Mercedes. We’d still rather drive the E 63 S (Sedan or Wagon) — it’s the rawer performance car — but the BMW is a better driver than the closest competitor from Audi: the 2021 RS 7 Avant. If BMW made a Touring longroof version of the M5, we have a feeling that it would’ve fallen smack dab in the middle of our superwagon comparison test, second to AMG, but better than Audi Sport. It even lines up neck-and-neck with those other German competitors with its $141,045 as-tested price.

All the tech and feature updates ensure that the M5 keeps pace with the also-fresh German bruisers, and the new suspension bits make it genuinely viable as both a daily and weekend track car. Given that, I can conclude that the BMW M5 is back, and it’s rightly sitting at the top of the 5 Series’ M-badged throne. Sorry for your short-lived reign, M550i.