This stick-shift '94 BMW 7 Series is an absolute trip

Volkswagen's retro-inspired ID.Buzz EV will arrive in America in 2023

Toyota is taking the rally-inspired GR Yaris rallying after all

Even in the face of fading four-door relevance, a new luxury sedan still turns heads, and that goes double when it’s sporting the Flying B. The 2021 Bentley Flying Spur V8 marks the return of the “entry-level” variant of Bentley’s storied touring sedan, and perhaps for the last time, as parent company Volkswagen appears poised to electrify its flagship luxury brand.

As luxury nameplates go, Flying Spur really isn’t all that long-running. It was used on a handful of cars in the late 1950s and early 1960s and then mothballed for four decades, returning in 2005 as part of the same Volkswagen prestige project that brought us the Phaeton. The two were even assembled side-by-side for a brief period at one of VW’s German facilities while Bentley’s factory in Crewe scaled up; that probably went over far better in 2005 than it would have in 1959.

My oldest remaining memory of the (then still a Continental) Flying Spur’s modern incarnation stems from a write-up by a journalist who had embedded with some of VW Group’s engineers in South Africa. They were subjecting it to hot-weather validation, running the prototype (disguised as a Mercedes-Benz) deep into triple-digit territory on remote, dusty highways in a once-unforgiving and distant corner of the globe.

The whole thing seemed very romantic to a 20-year-old college student and budding European car nut. The notion of a 190-mph super-sedan being tested in a locale that was once the southern terminus of the known world seemed almost mythical, and it left me with the lingering image of the Flying Spur as the sort of conveyance one might employ in a quest to reach the very ends of the Earth. 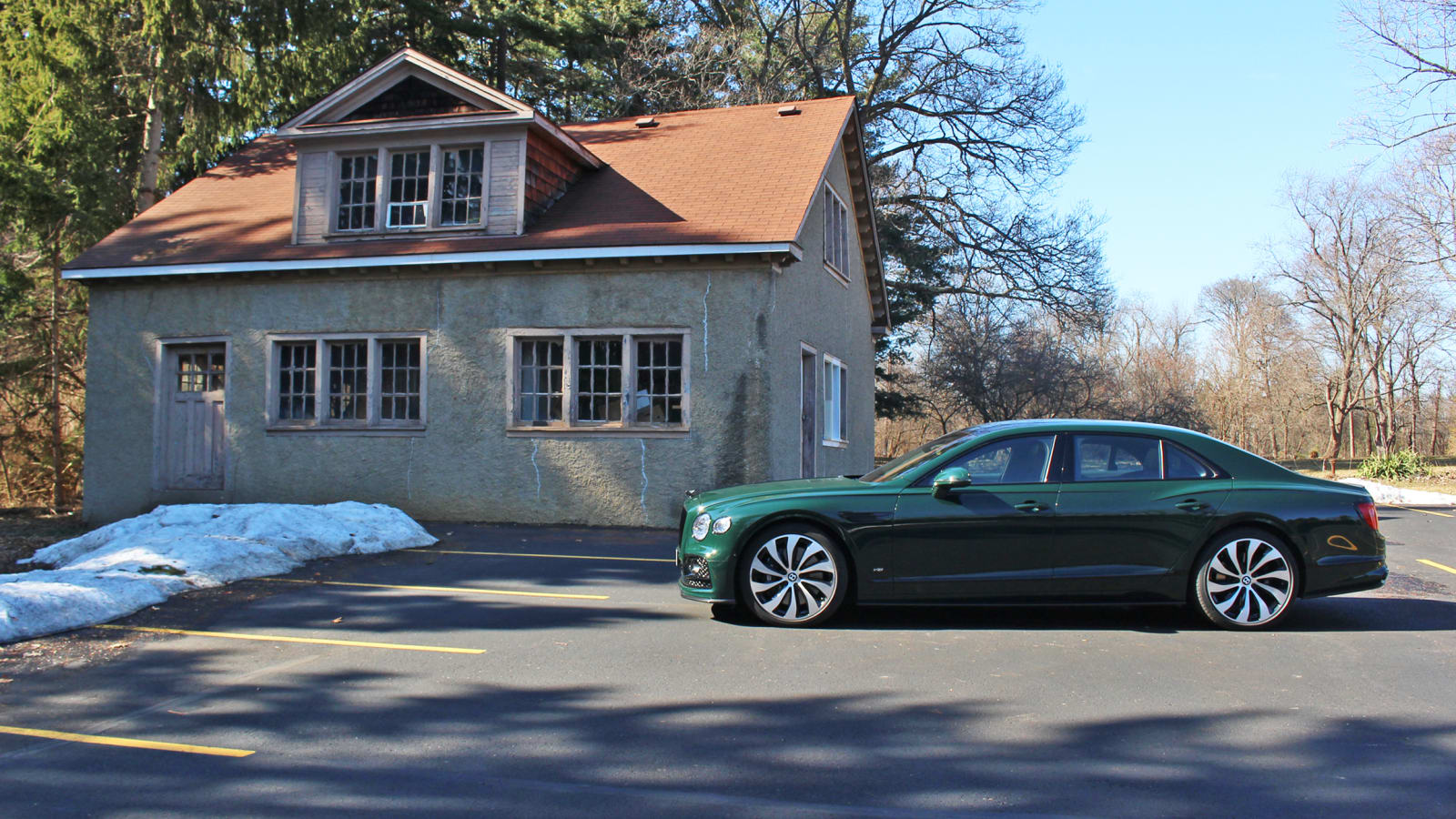 Naturally, it wasn’t long after Bentley asked if I wanted to sample the new Flying Spur V8 that this association bubbled up. Let’s face it, though; taking a road trip in a grand British luxury sedan needs no justification. This isn’t a car that requires an occasion; it supplies one all on its own.

The 4.0-liter V8’s 542 horsepower may not hold a candle to the W12’s 626, but it also has to contend with 200 fewer pounds. Combined with cylinder deactivation, the V8 manages a 16% improvement in fuel economy, eking out 15 mpg in the city, 20 on the highway and 17 combined. The base V8 model also lacks the W12’s standard all-wheel steering and electronically controlled anti-roll bars, but those are still available if you’re willing to cough up some extra cash, and relatively little of it, all things considered.

The Flying Spur V8 has a base price of $196,000. Tip of the iceberg. Porsche’s individualization options look like junior varsity efforts in the face of a Bentley “specification” list. Between the aforementioned all-wheel steering and fancy sway bars, the interior packages and all of the exterior dress-up, our Flying Spur’s all-in price ballooned to $265,565 (including destination and, yes, gas guzzler tax). I could probably dedicate an entire article to explaining the equipment differences between this V8 and the W12 model Snyder drove last year. Don’t worry, I won’t, but you get the idea.

Our test car also came with the range-topping Naim audio system. At $8,880, it was the second-most expensive option on our test car (the $20,460 Mulliner Driving Specification takes that honor), but what an absolute experience, down to the seat-mounted woofers, which, when tasked with playing anything up-tempo with a beat, deliver what I can only imagine is the same tactile sensation you’d feel inside a running popcorn maker.

A transcontinental journey certainly wasn’t in the cards, but traveling from Detroit to Michigan’s Upper Peninsula in March can be an adventure in its own way, and with all-wheel drive and winter tires, the Bentley would be more than ready for any challenge I might encounter — or so I thought. 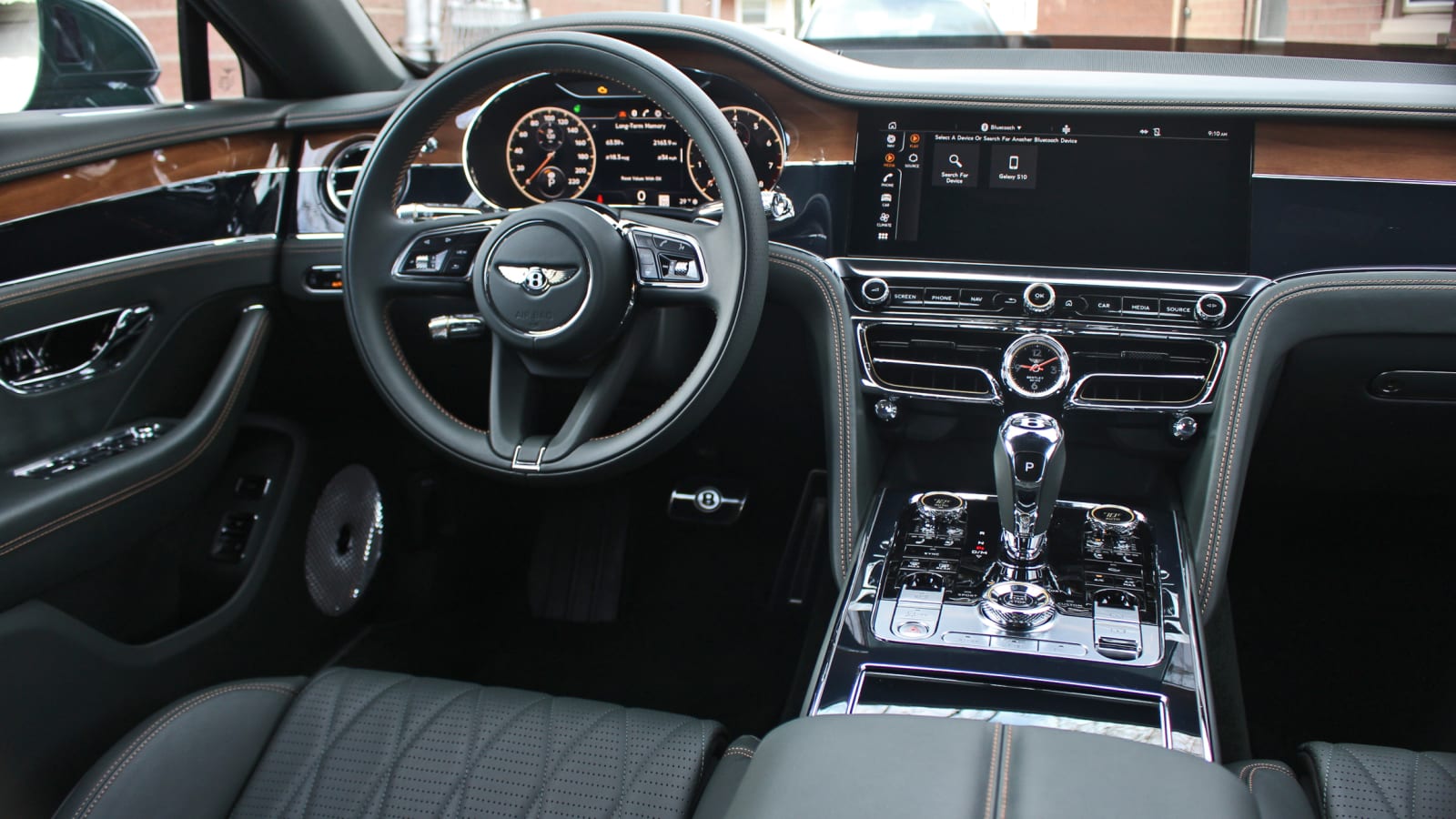 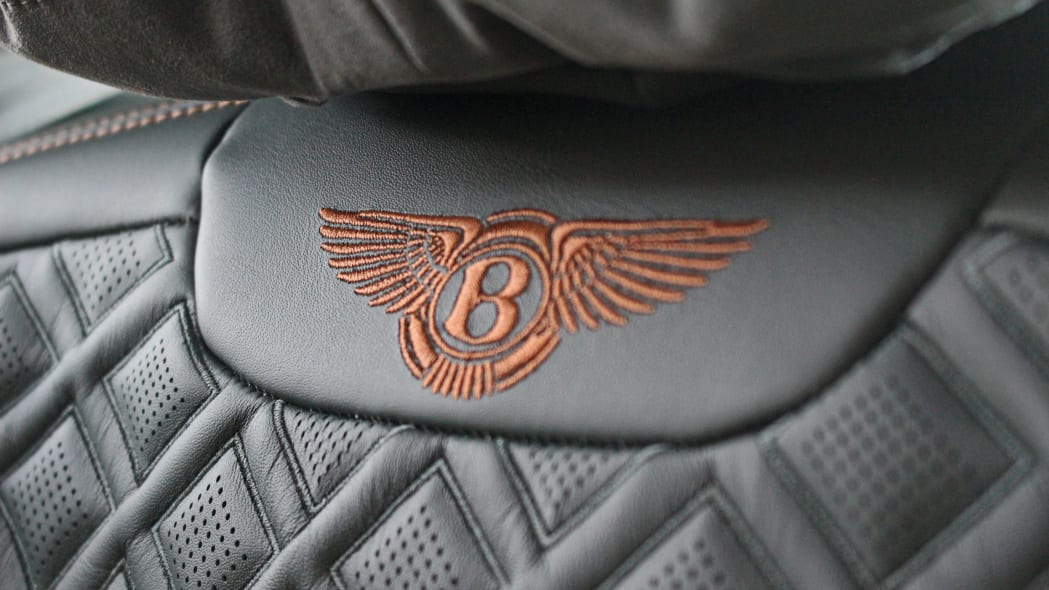 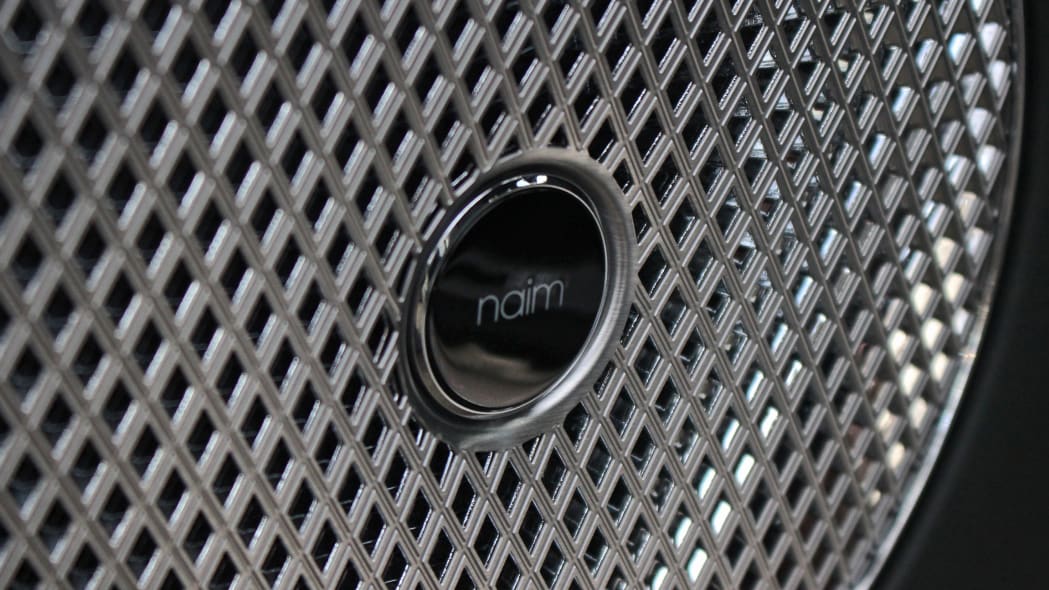 While a Flying Spur is an amazing machine in which to conduct such a journey, it brings to the table a few inherent complications. I am used to making travel arrangements with loaner vehicles; the logistics are rarely any different than usual, though I do avoid situations where the car is out of my care – valet parking, for example – to limit its exposure to possible calamities. But while it’s fairly easy to plan a trip with the care of a half-ton pickup or mainstream crossover in mind, one might think twice about where to park a $265,000 Bentley.

I’ll be the first (but certainly not the last, as social media swiftly proved) to tell you that I do not belong in a Bentley, and if one glance at our tester’s window sticker wasn’t proof enough, the three days I spent driving it were littered with further evidence that I was way outside of my element. There was the two-mile drive along Detroit’s Woodward Avenue during which a young adult enthusiast literally hung out of a moving Mustang Convertible to get video of the Flying Spur. Later in Mackinaw City, there was the young boy fawning over it, taking photos of it from every angle with a smartphone while it sat in an out-of-the-way hotel parking space, his parents waiting patiently in a running car while he documented his find.

I’m used to driving cars (my own included) that are much more impressive than I am, but it’s not often I find myself behind the wheel of a machine that can alter the behavior of other people so dramatically by its mere presence. I know the effect would be muted in a more price-appropriate habitat, but even in a cynically wealthy enclave, I doubt this deep green (Barnato) finish would go completely unnoticed.

But while the Flying Spur’s aesthetics may be dramatic, the driving experience is pure serenity. Sure, even this “lesser engine” packs 542 horsepower; that’s plenty for anything you’d need to do behind the wheel. It’s athletic, but not in the compact, power-dense manner of a BMW M3 or Audi RS4. The Flying Spur weighs as much as a Hemi-powered Dodge Durango, after all; it’s a lot of car in every sense of the phrase. 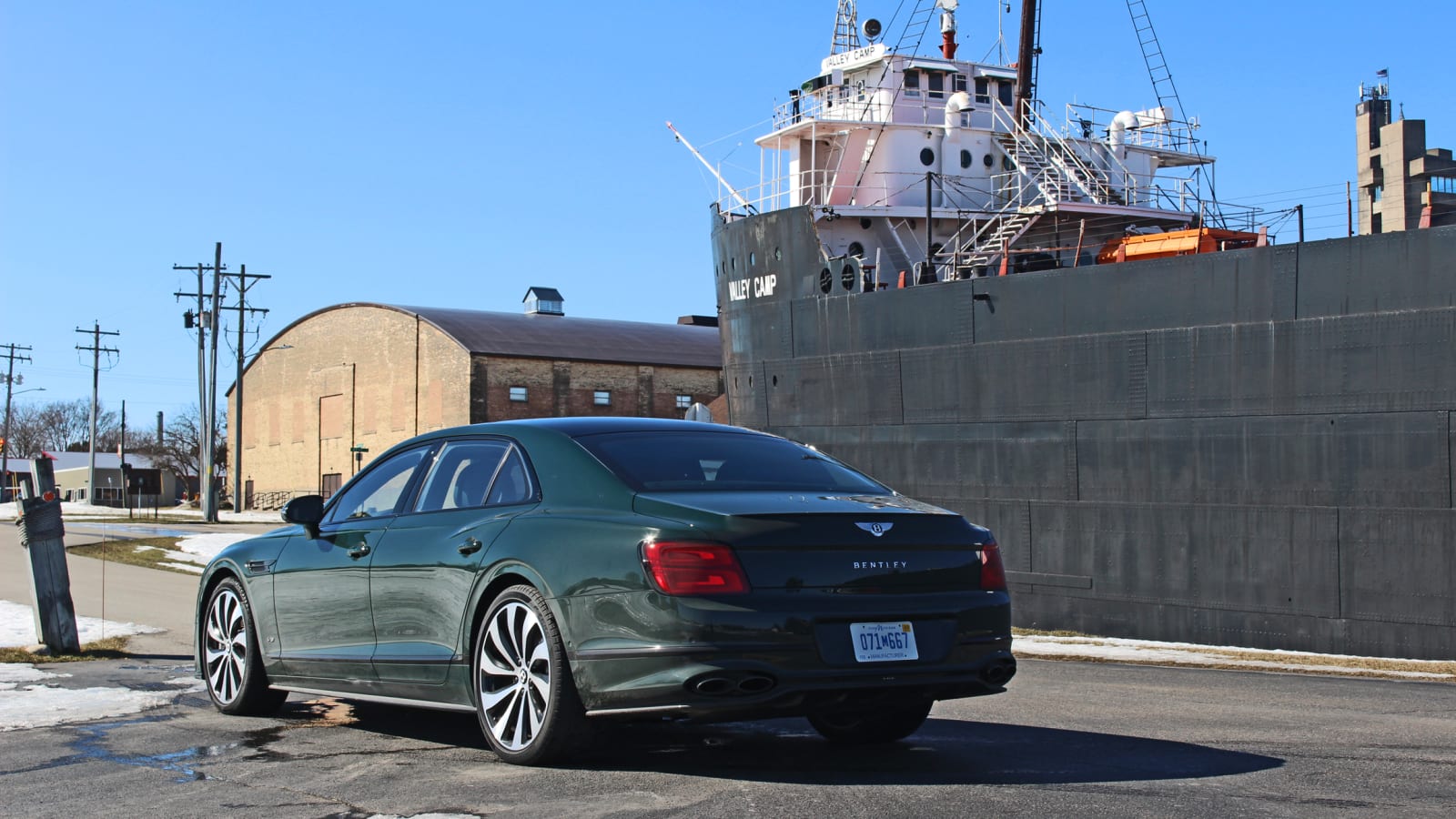 Sure, there’s a thrum of tire noise from the 22-inch wheels on Michigan (read: lunar) concrete, and sometimes it feels like a miracle that this entire state hasn’t fallen into one of its own potholes, but the Flying Spur is virtually impossible to perturb to any alarming degree. When I first pointed its nose north, the Flying Spur said it had more than 500 miles of range in the tank; each one of them vanished almost imperceptibly.

Its interior is positively replete with toys, too. Just about everything can be tweaked and tinkered with, and even if they have digital controls beneath them, there’s a comforting number of physical controls that always seem to reside precisely where you’d expect them. This order feels more German than British, but that’s neither here nor there, and for each rigidly engineered component inside, there’s something that conjures the image of the shed-built British flagships of yore.

Take the infotainment system, with its wired-only Android Auto and Apple CarPlay and so-so resolution. It feels merely outdated, rather than charmingly anachronistic, but Bentley doesn’t sell the Flying Spur as a technological tour-de-force, so this actually seems more on-brand than not.

What stands out most about the Flying Spur is the fact that nothing really does. Many cars’ identities stem from some signature element, whether it’s the MX-5’s lightweight chassis or the Porsche 911’s rear-mounted engine. You don’t lift a single panel, point, and say, “that’s what makes it a Bentley.” The Flying Spur’s superiority is holistic, its identity more diffuse.

It’s the effortless cruising, the on-demand power, the hidden corner-carving prowess, and yes, even the vaguely outdated but still supremely competent infotainment system. The Flying Spur isn’t a solo; it’s a symphony — an aggregation of excellence. This is car that will make you believe it can do anything, with a presence that bestows the same impression upon its audience.