Win an EV | The best giveaways of the week, including a Tesla Model S

There are a lot of reasons that Mazda Miata owners and fans often say, “Miata is always the answer.” It’s affordable, fun, reliable, and just practical enough to be more than a car for the weekend. But the model has now been in production for 30 years and four generations, and those four generations feature a few mid-cycle refreshes. So sure, Miata may be the answer, but that leaves another question: Which Miata is the answer for you?

Though you can’t really go wrong with any Miata, possibly the easiest for a lot of people to get into is the third generation (commonly referred to as the NC, preceded by the NA and NB, and superseded by the current ND). It maintained the essence of what makes a Miata great – light weight, playful handling, driver engagement – but also made strides in daily livability. The third generation (2006-2015) is the most refined and spacious example. Plus, it’s new enough to have a few more modern conveniences while being old enough to be priced affordably. It’s really become a sweet spot in the range.

Why the Mazda MX-5 Miata?

The main reason you would want a Miata is that it’s just so much fun. It doesn’t matter what version you get, they all deliver on the same light, playful sports car experience. The absolute heaviest examples, the third-generation power-retractable hardtop (often referred to as PRHT) models, maxed out at around 2,600 pounds, while the lighter soft top versions came in at around 2,500 pounds. That’s about 200-300 pounds less than the also excellent FR-S/BRZ/86 triplets. Other generations were even lighter. Steering is talkative enough to hold a conversation, as is the chassis. And as quick and zippy as the car is, it’s also predictable and won’t bite you if you start pushing things too far.

On top of being a blast to drive, Miatas, particularly the NC we are discussing, are quite easy to own. With 5.3 cubic feet of space, the third-generation car offered the biggest trunk a Miata has ever had, and it’s a usable shape that’s great for a week away or even commuting and trips to the grocery store. There are even four cupholders in this car built for two people. This generation offers the most space for both the driver and passenger, so it’s an ideal choice for those of tall or large builds that want in on the roadster fun.

The convenience doesn’t end with space. The NC Miata received a redesigned soft top (seen in the two images below this paragraph) that was easier to lower with just a single latch. It folded on top of itself so that an additional cover wasn’t needed for a clean look with the top down. It was also the first with the power retractable hard top, which provided additional sound and temperature isolation with the top up. The PRHT didn’t impede cargo space, either, and would go up or down in just 12 seconds. 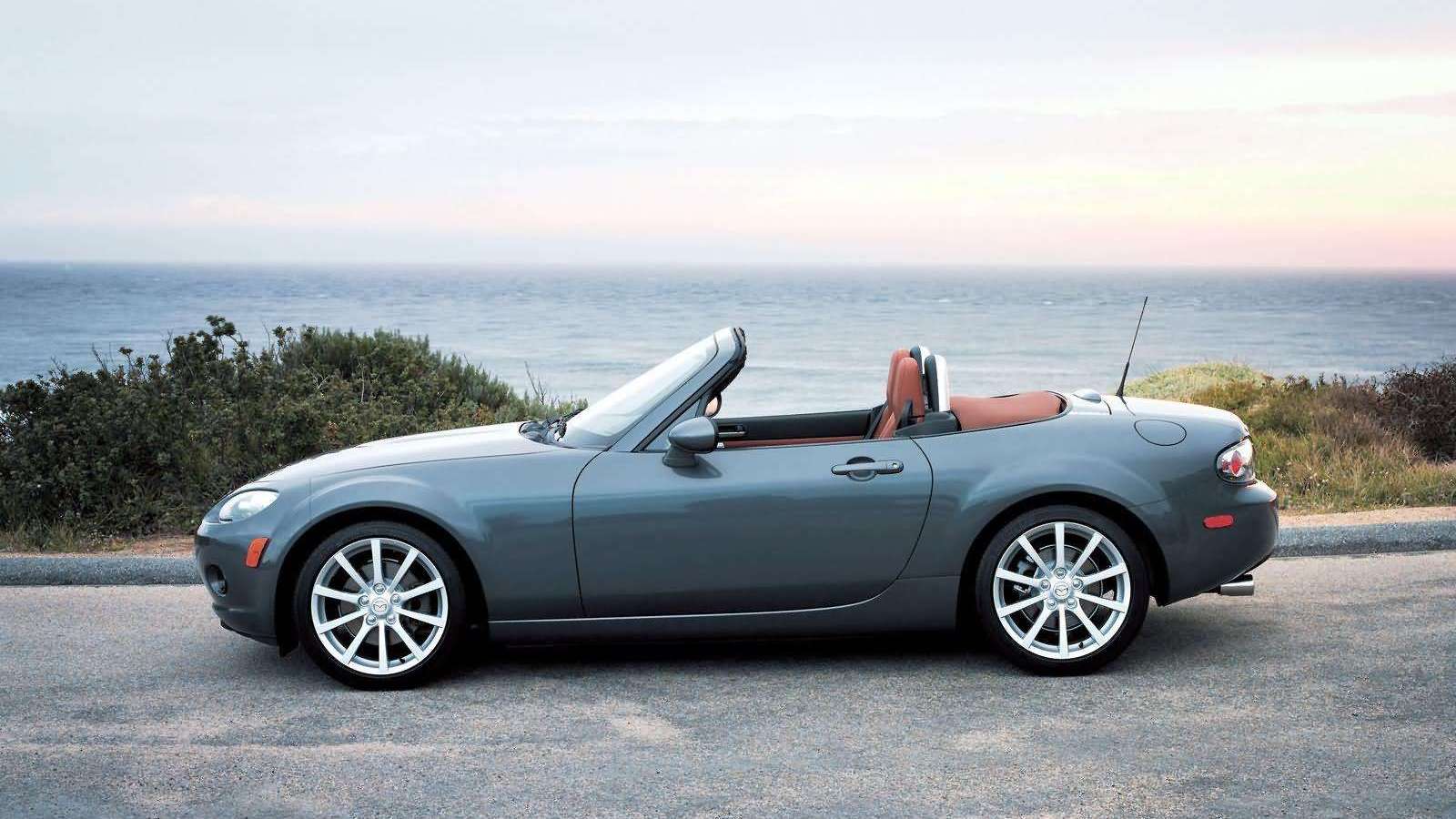 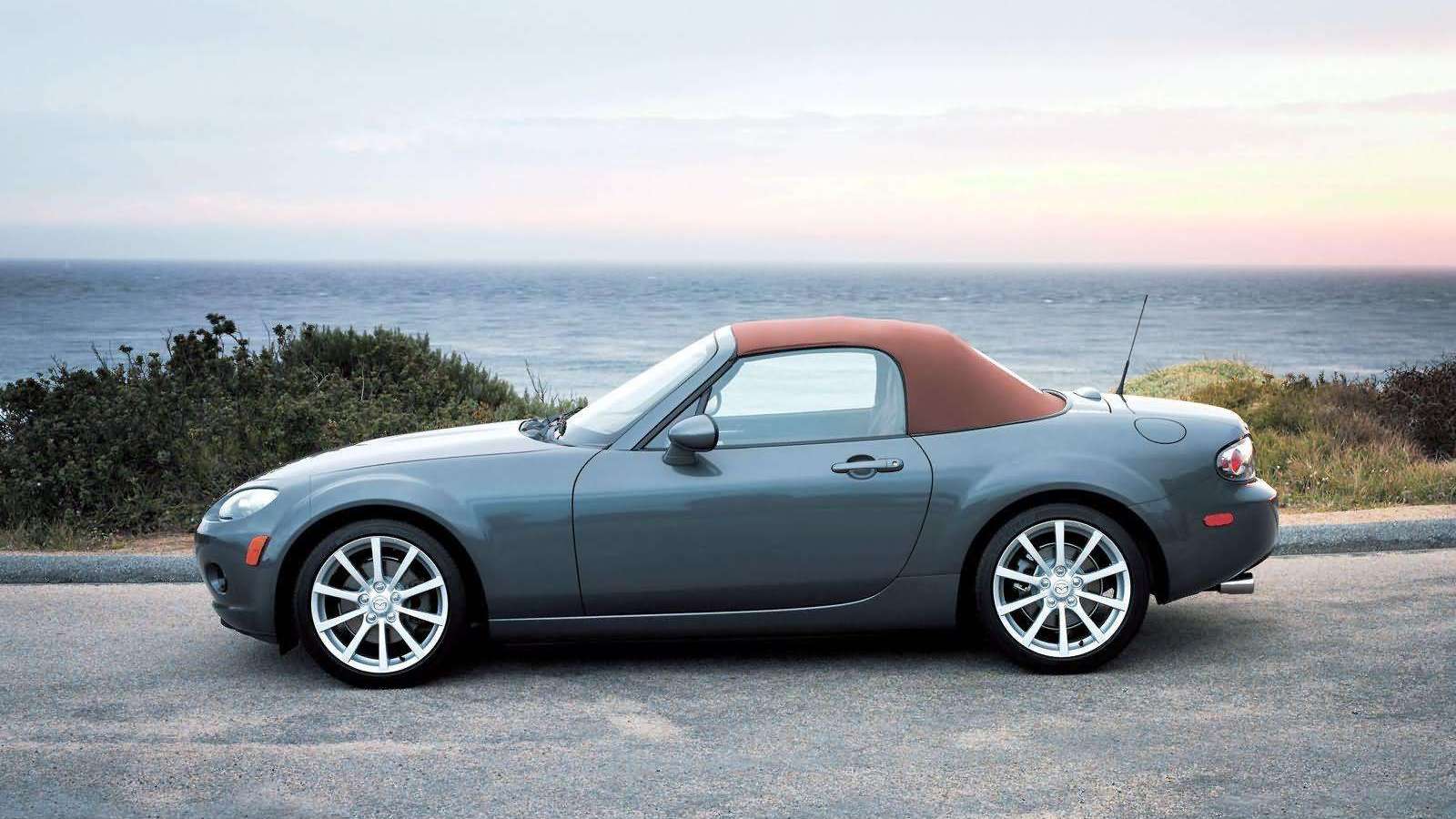 The NC generation is new enough to feature available niceties such as heated seats, USB and Bluetooth integration and keyless entry.

Then there’s the affordability and reliability. Depending on age and specification, you can find nice NC Miatas for between $10,000 and $20,000. They all get around 24 mpg combined fuel economy on 87 octane fuel, so they’re relatively frugal. And they’re immensely reliable, with The Long-Term Quality Index study found at dashboard-light.com giving the NC an Exceptional rating of 90.5 out of 100, far above the industry average of 46.

Which Mazda MX-5 Miata to choose?

The NC Miata was sold from 2006 to 2015, but in that time, it didn’t change much, with just a mid-cycle refresh in 2010. The earlier models (pictured directly below this paragraph) have a more rounded and reserved design. They launched with a 2.0-liter four-cylinder, the largest offered in a Miata at that point making 166 horsepower and 140 pound-feet of torque with either the five- or six-speed manual transmission. The six-speed automatic dropped horsepower down to 163. In 2007, the power retractable hardtop was introduced. 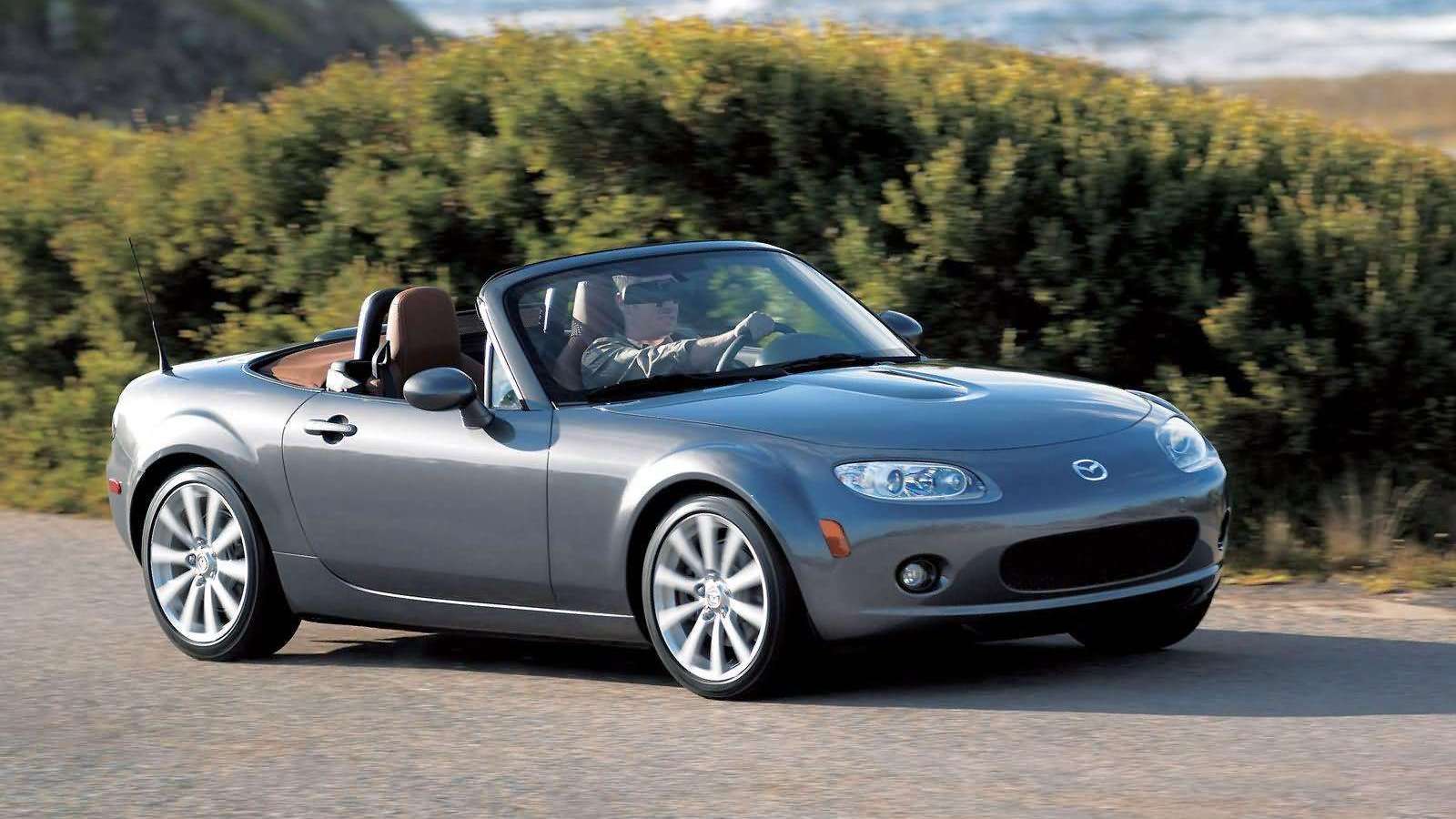 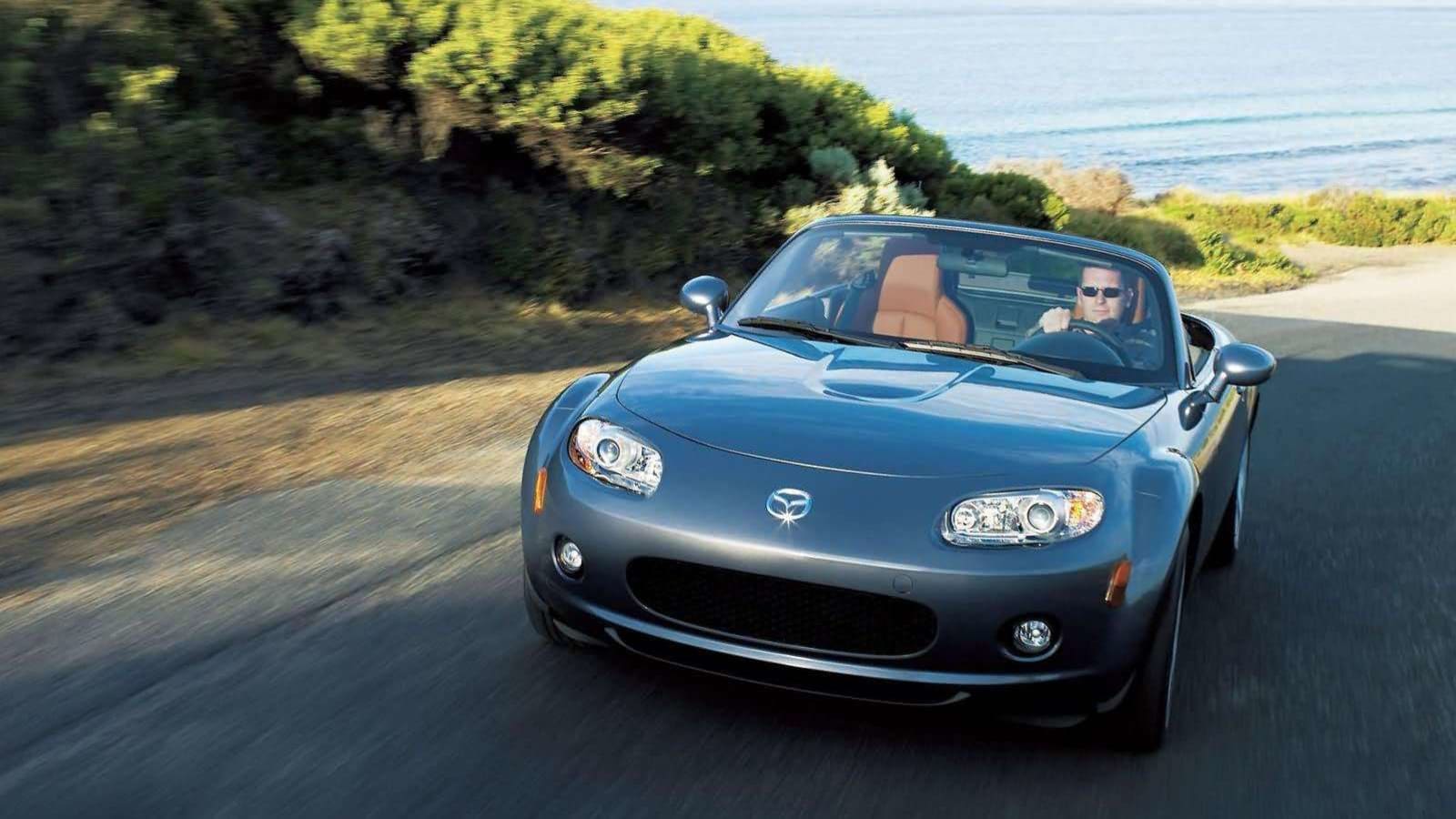 The later models (pictured directly below this paragraph) received a restyled front fascia with a smile-shaped grille and swept-back headlights. It also got red taillights instead of the chromed examples on the early cars. The powertrains were basically the same, but horsepower on the manual models increased slightly to 167 horsepower, and the redline rose to 7,200 rpm instead of 6,700. The automatic model actually lost a bit more power, dropping to 158, and it had the old redline. 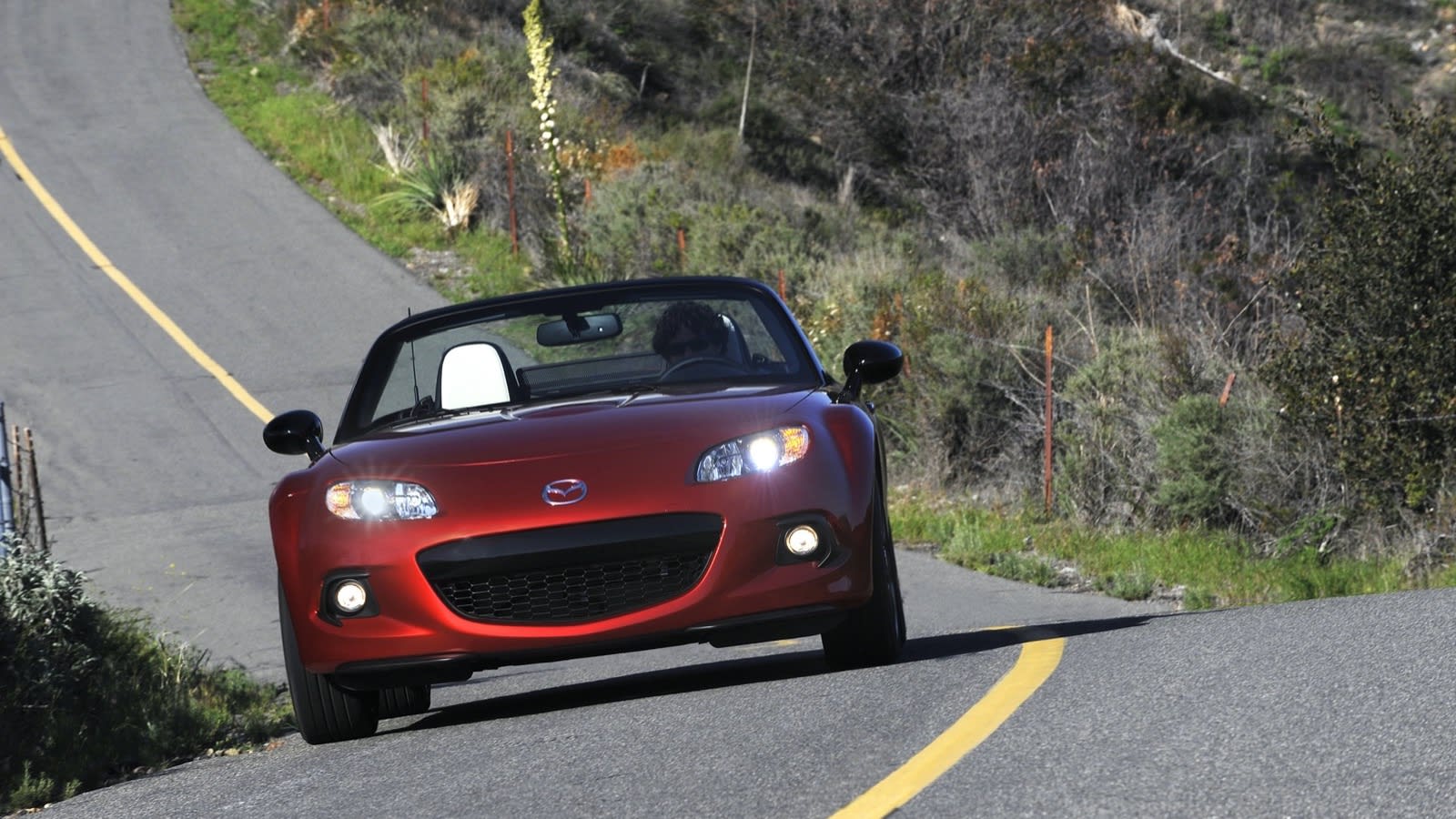 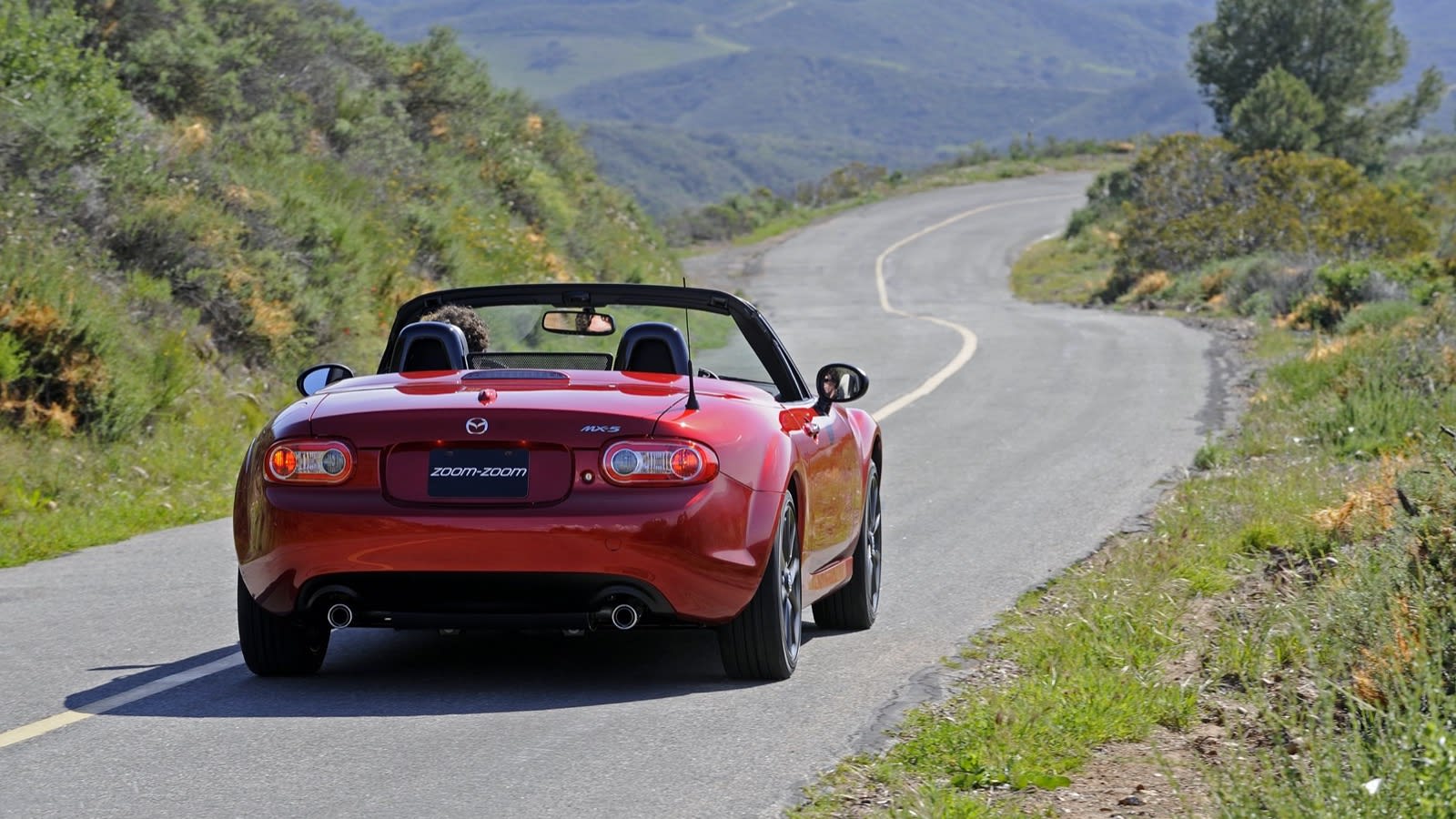 Really, price, styling and equipment will be your primary deciding factors. Find the car with the look, equipment and price that fits your needs. You can go with an affordable five-speed model with cloth seats, or a decked-out six-speed hardtop model with leather seats and other amenities.

Something that Miata buyers looking for maximum performance will want to keep an eye out for are cars with the suspension package. This was only available for six-speed manual cars and included stiffer suspension tuning with Bilstein shocks. Perhaps more important, these were the only cars to come with the Torsen mechanical limited-slip differential.

This package was also included as standard on the Club trim level introduced in 2013. That model also added a front air dam and rear diffuser panel, dark wheels, black mirrors and trim, Club badges and stripes, and on the PRHT, a black-painted roof. The interior of the Club also got a body-color dash panel. It’s a stylish model, but as the suspension package was available as an option on all six-speed cars, it’s not necessary to get the most performance out of your NC Miata. 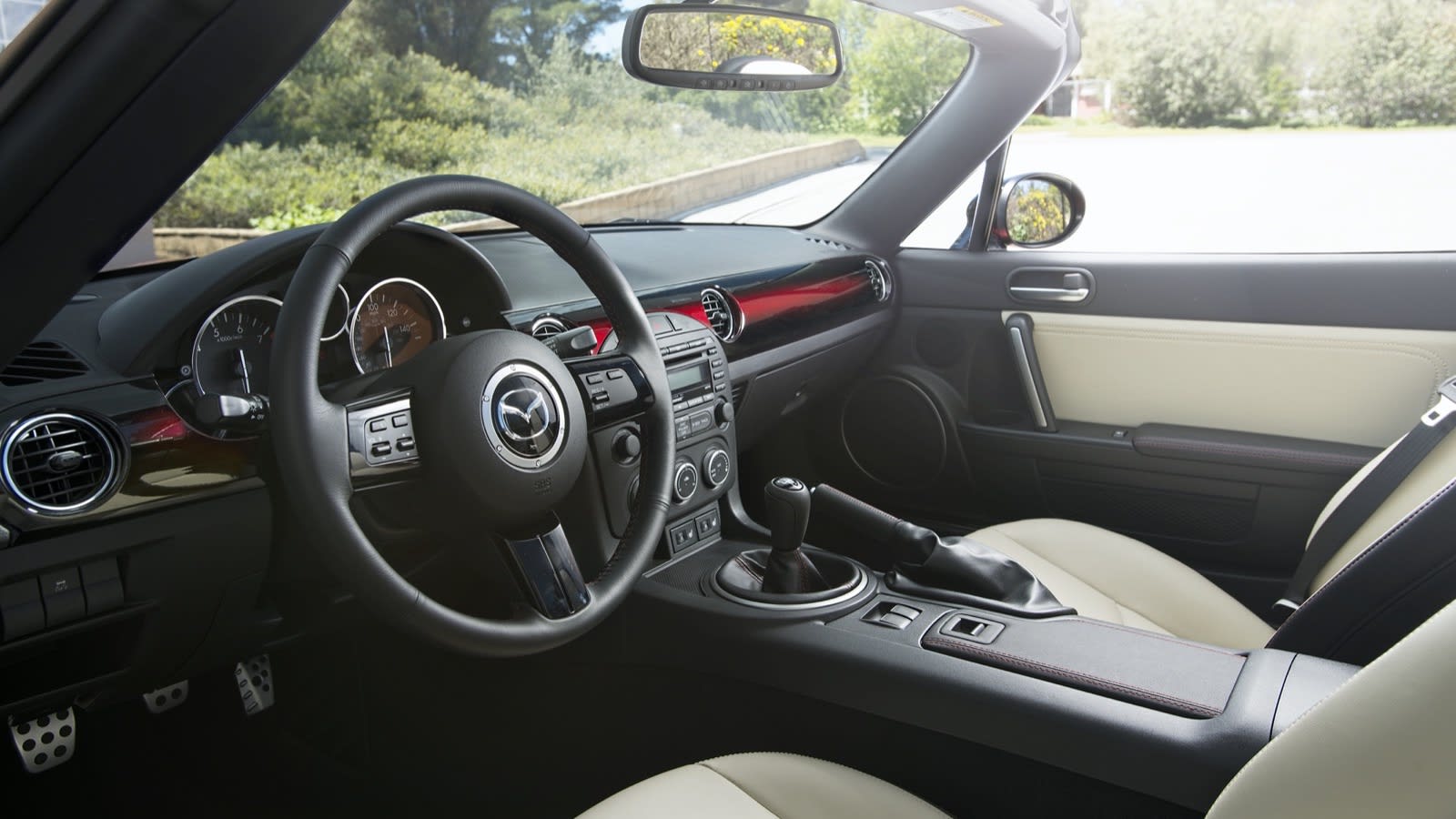 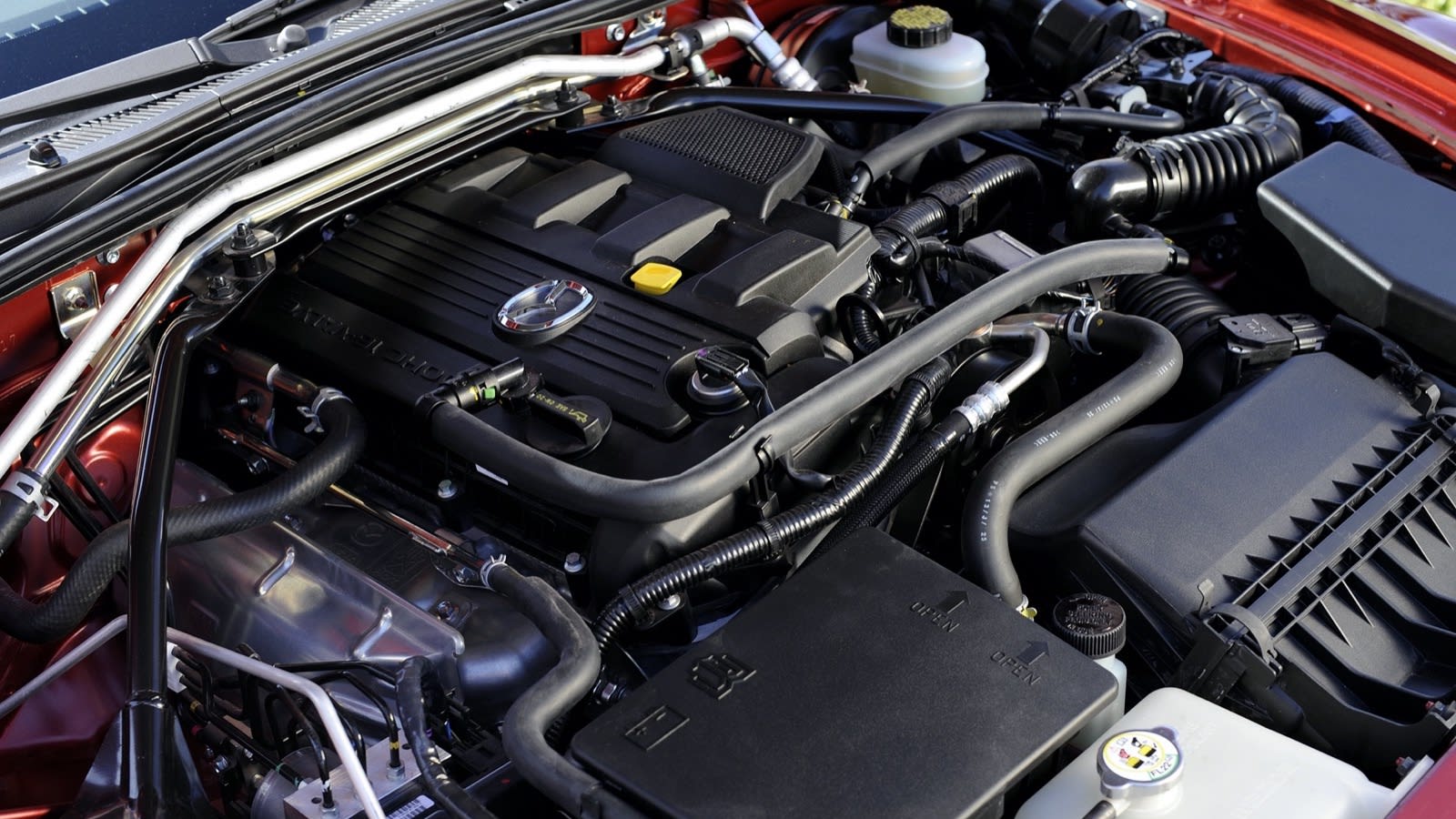 As Mazda likes to tout, the Miata is the best-selling two-seat roadster of all time with over a million sold globally. And considering the NC was sold for nearly a decade, they’re not difficult to find. And although they could be used on a daily basis, most owners had them as fun second or third cars. That means they’re frequently in good condition with relatively low miles, even in that $10,000 to $20,000 price range. 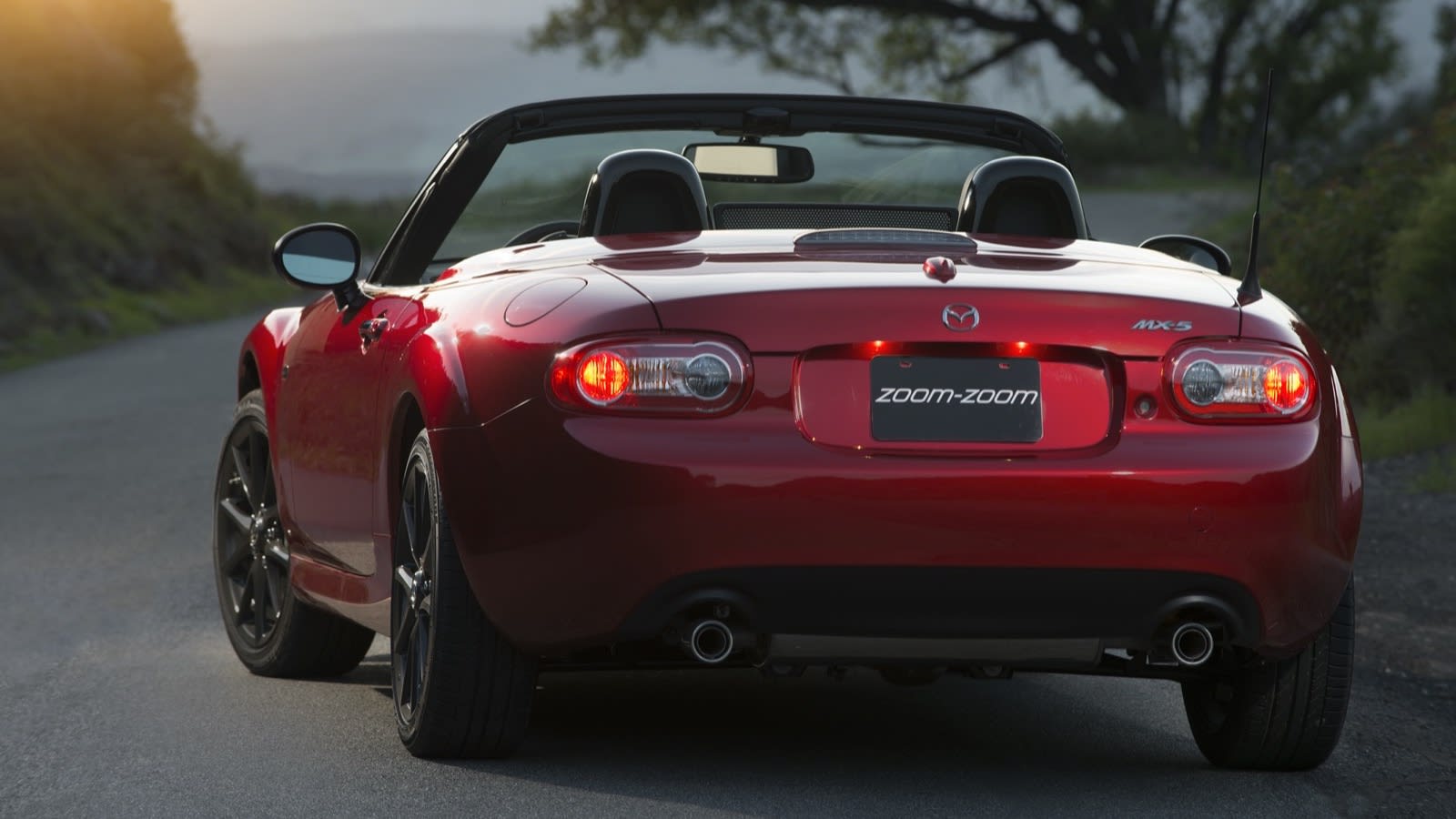 Even with all the positives offered by the Miata, it may still not be quite right for you. There are some good alternatives if that’s the case. The most obvious two are the NC Miata’s contemporary competitors, the Pontiac Solstice and Saturn Sky. Both of those cars offer more dramatic styling; curvy with the Solstice or angular with the Sky. They were a bit more powerful with 177 ponies, but also weighed a few hundred pounds more. The top mechanism was more complicated and intruded on their oddly shaped trunk space, and ergonomics and material quality weren’t as good as the Miata. But the twins also later offered turbocharged variants making a whopping 260 horsepower. Pontiac even briefly had a Targa-top coupe, though that was especially short lived.

Speaking of coupes, there are also the Toyobaru sports cars we touched on earlier. With 200 horsepower, the Scion FR-S and Subaru BRZ are more powerful, and even have a higher redline. Also, being four-seat cars, they offer more space for stuff, pets and maybe, every once in a while, extra people. They’re a bit more serious with stiffer suspension, but that’s not necessarily a bad thing.

And of course there’s also the Honda S2000. It had an incredible naturally aspirated four-cylinder making around 240 to 250 horsepower with a redline of 8,500 to 9,000 rpm. It had amazing handling to boot and crisp styling that’s aged very well. It’s older, having ended production a few years before the third-generation Miata, so it won’t have as many modern features. Prices are climbing on them, as well.